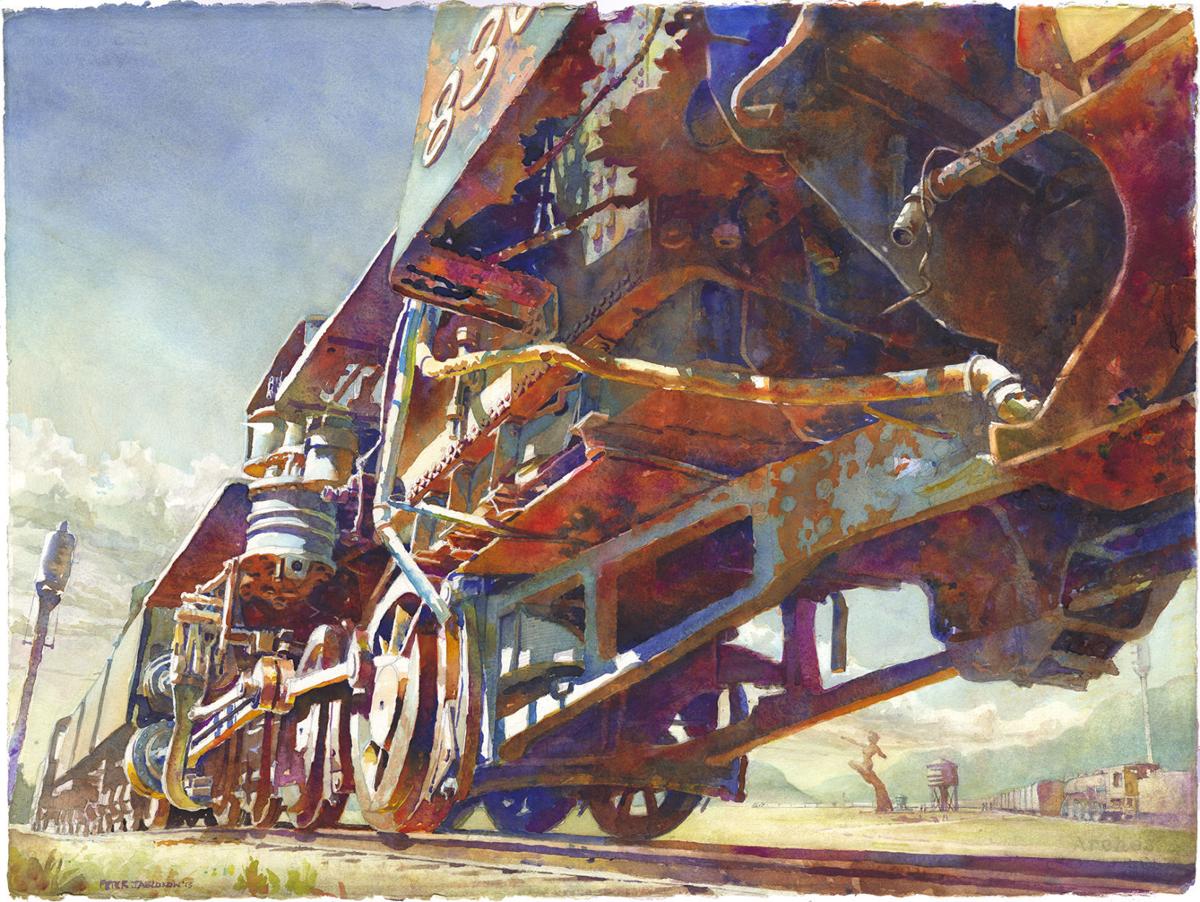 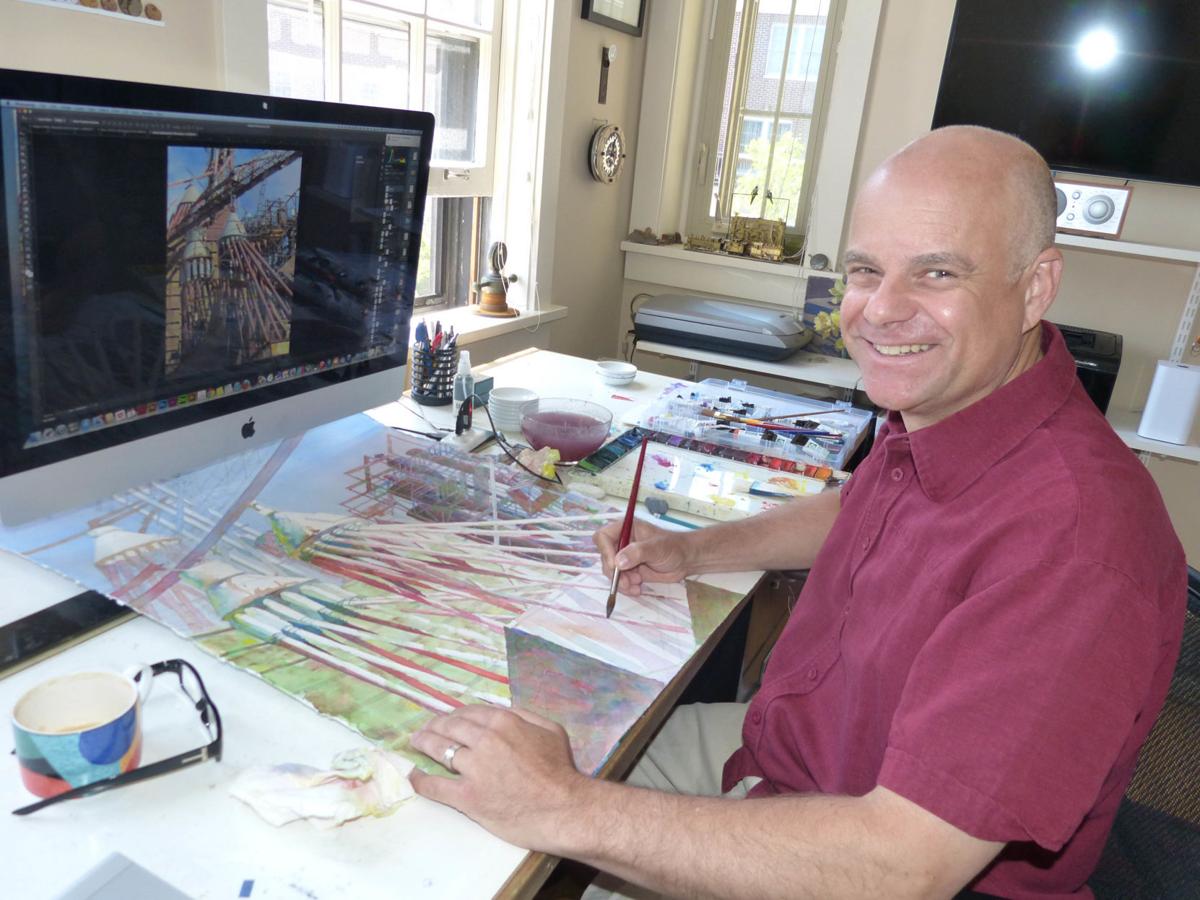 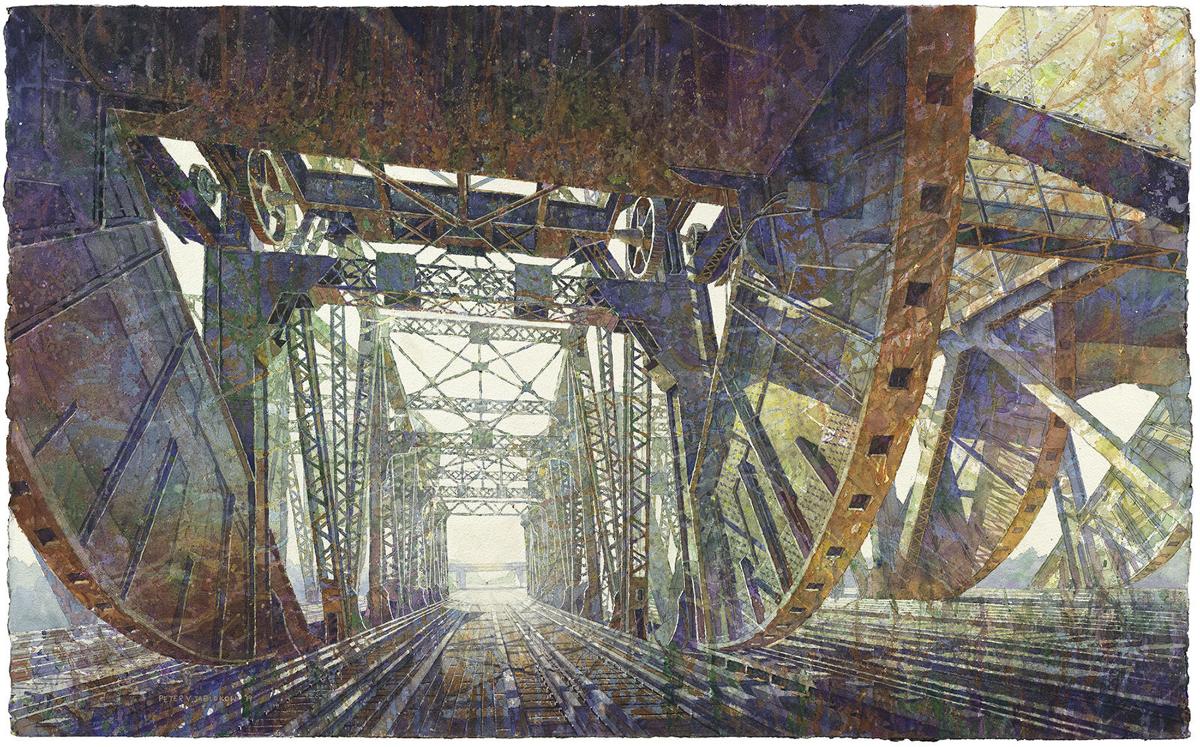 “Scissor Bridge No. 2,” by Peter Jablokow.

Jablokow grew up in Lagrange Park, Illinois. The son of an artist, drawing and painting has always been part of his life. Frank Lloyd Wright’s houses were close to his, which influenced his decision to pursue a degree in architecture at Iowa State University.

A trained architect, Peter started migrating towards art by becoming an architectural illustrator, working with Rael Slutsky Associates, and later Manuel Avila associates. Peter loves the technical aspects of drawing perspective images and is drawn to its exactness of detail.

“I create watercolors of buildings, bridges and machinery with a messy, rusty, chaotic feel that comes with age and lack of use,” said Jablokow. “The patterns, textures and colors of large, old, decaying equipment has a feel I don’t quite understand, but am attracted to, and have a desire to record before it’s gone.”

The center is open Fridays for people ages 65 and over or those who have compromised immune systems.

Others can visit Saturdays and Sundays.

Visitors will be asked to participate in health and safety measures in light of COVID-19.

Measures include wearing a mask at all times. Masks can be provided.

Guests will enter via the elevator and exit through the front door, unless they require the elevator, keeping 6 feet apart.

There will be a ten-person maximum in the building at all times.

Read our Resorter story about the restaurant known for its world famous broasted chicken and its new food trailer.

Art in the Park, Maxwell Days and arguably the largest flea market in Walworth County are all on the horizon.

From lakefront patio gigs to rural local spots, here's a list of some of the area shows over the next couple weeks.

An event this size will have to wait, according to the Elkhorn Area Chamber of Commerce & Tourism Center.

From lakefront patio gigs to rural local spots, here's a list of some of the area shows over the next couple weeks.

Over 200 donated quilts from Wisconsin, Illinois, Idaho and Florida will be in the Quilt Auction.

Canceled TV shows 2020: Which of your favorite series are coming to an end?

A roundup of all of the shows that are coming to an end this year.

This year's awards show is introducing new categories in the wake of the coronavirus pandemic, including, "Best Music Video From Home," and "Best Quarantine Performance."

SpaceX crew returned to Earth and other space news you missed

Movies in a Minute: 'Summerland,' 'Cut Throat City,' & 'The Secret: Dare to Dream'

Movies in a Minute: 'Summerland,' 'Cut Throat City,' & 'The Secret: Dare to Dream'

The weirdest Airbnbs to add to your bucket list

The weirdest Airbnbs to add to your bucket list

Movies in a Minute: 'The Rental'

Movies in a Minute: 'The Rental'

“Scissor Bridge No. 2,” by Peter Jablokow.