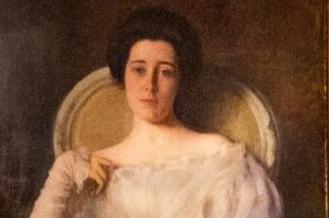 William Thorne’s portrait of Alice Sumner Fisher was recently donated to the library by the Wallis family.

William Thorne’s portrait of Alice Sumner Fisher was donated to the library by Wallis family.

On Aug. 27, the library officially unveiled the painting at an event which included Elise Kaye, great-granddaughter of Thorne, Delavan City Mayor Ryan Schroeder, City Administrator Brian Wilson and members of Aram’s board of trustees.

Refreshments were provided by the Friends of the Aram Public Library.

Aram Director Michelle Carter gave a brief welcome to those in attendance Aug. 27.

“With our newest painting, Aram’s current art collection gains a stunning new portrait, available to current and future generations, spurring creativity, imagination and discussion both here in our present library and soon in our new future library,” said Carter, referring to the $9 million library renovation/construction project that was recently approved by the Delavan City Council.

Schroeder helped Carter unveil the painting, which was painted by someone once known as the “Dean of Wisconsin portrait painters.”

Born in Delavan, Thorne became an American artist and portrait painter of the “carriage set.” He began work as an illustrator, attended both the School of the Art Institute of Chicago and the antique class of the National Academy of Design in New York City.

He moved to Paris where for three years, where he painted mostly wealthy Americans living in the city. Returning to New York City, Thorne maintained a studio in New York’s Carnegie Hall. Local Delavanites believe that, early in his career, Thorne shared studio space with John Singer Sargent, a well-known portrait painter.

Alice Sumner Fisher was born in Bainbridge, New York, in 1876. Her family moved to Delavan, where she eventually met and befriended Thorne.

According to Wallis family lore, William Thorne was “sweet on” Alice Sumner Fisher, but in September 1901, Alice married George Fisher, also of Delavan.

The two later divorced and Alice moved with their two children, Eleanor and Ellis, to the Main Line, outside of Philadelphia, where she married Alexis Dupont Parker.

On Monday, Oct. 18, Aram is partnering with the Walworth County Arts Council for a tour of the library’s unique art collection.

Friends of Aram Public Library President Terry Yanke will give the tour, which will include works by Adolph and Ada Shulz, Frank Dudley, Frank Phoenix and Thorne.

Photos from the first day of school around Lake Geneva, Williams Bay

The following information is subject to change. To list an upcoming gig here, email us at newsroom@lakegenevanews.net.

EAST TROY — The founder of Culver’s Restaurant recently mentored the staff at Timber-lee.

MILFORD, Del. (AP) — Five years ago, Lizzy Howell posted a video of herself performing a pirouette to her Instagram page.

RACINE — Two new full-time positions will open at Racine Zoo thanks to funding from the Woodland Park Zoo’s Empathy Initiative.

Concert, art exhibit are next week at UW-Whitewater

WHITEWATER — A special concert and the start of a new art exhibit are both next week at UW-Whitewater.

Along with country humor and audience participation, the musical includes 27 songs, including "Crazy" and "Walking After Midnight."

Here's a list of winners from Sunday night's Emmy Awards, plus a gallery of photos of stars on the red carpet before the show.

William Thorne’s portrait of Alice Sumner Fisher was recently donated to the library by the Wallis family.