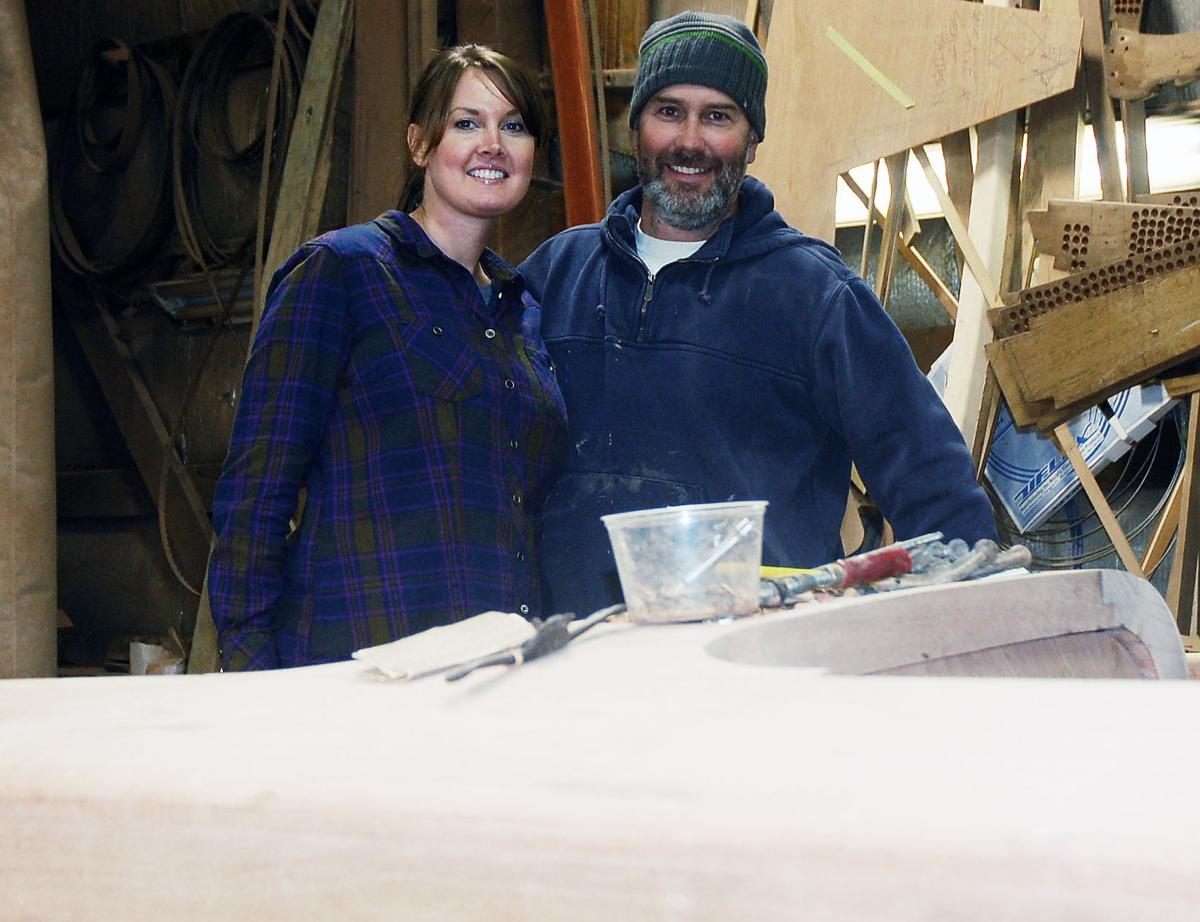 Olivia and Lars Bergersen, owners of the Bergersen Boat Co., and now Shepherd Boats, stand in the cockpit of the Shepherd boat now being built at Bergersen. (Photo by Chris Schultz/Regional News)

TOWN OF LYONS — It was love at first sight.

Lars Bergersen of Bergersen Boat Co. said he first saw a Shepherd boat 12 years ago when he agreed to renovate the craft for a local resident.

“That was the first time I realized that this is a great boat,” Bergersen said.

The boat exhibited expert craftsmanship, and its design was well thought out, he said.

And so he and his wife, Olivia, as owners of Bergersen Boat Co., decided to pursue ownership of the Shepherd name. The couple recently announced that they have legally acquired the former boat company’s name and they intend to build new boats in Walworth County based on the Shepherd design.

Bergersen’s father and grandfather were sailors. And Bergersen has been repairing and building boats for the past 22 years.

Bergersen Boat Co. has six buildings for storage and repair in Springfield at 7163 Commercial St., and another two buildings off-site.

Built from mahogany, the Shepherd has a look that’s distinctive. It stands in the water something like a bulldog. High at the bow, the Shepherd’s body tapers off to a rounded transom. The boat’s power plant is rear-mounted that provides plenty of room for a front and rear cockpit.

Local Shepherd boat owner Al Bosworth, who has pier number one in Lake Geneva, said he was pleased to hear that the Shepherd has been resurrected.

Bosworth is a member of the Blackhawk Chapter of the Antique & Classic Boat Society, and is chairman for the annual Geneva Lakes Boat Show at the Abbey Harbor.

As an 8-year-old, he accompanied his father and uncle to the boat show, where his uncle traded in a Chris-Craft for the Shepherd. Bosworth said he felt fortunate to inherit the Shepherd from his uncle.

The only drawback, he said, is that it is only 19 feet long.

Olivia Bergersen said she and her husband hired a trademark attorney to track down the company and any outstanding obstacles obtaining the name.

What the Bergersens found was that after the company built its last boat, it closed its doors and went out of business.

According to a Shepherd Boat history website, shepherdboats.com, the company was founded in 1928 by the father-son team of Lloyd Henry and Howard Shepherd.

In 1958, the father-son team retired and sold their boat business to a boat builder named James Hahn. Operating as Shepherd Boats Ltd., the company shifted production to larger day boats and cruisers.

In 1966, Shepherd was sold to Trojan Yachts. Trojan continued to build boats called Shepherds, although they were 50 feet and longer.

The last of the Shepherd boats was shipped to its new owners in May 1978, after which the name faded away. And not just the company disappeared. All of the plans, the machinery and patterns that went into making Shepherds disappeared as well.

“I can’t find any plans or patterns anywhere,” Bergersen said.

That hasn’t stopped Bergersen Boat Co. from building a Shepherd. The 22-footer looks like its ancestors from the 1930s and ‘40s, with analog dials in the dashboard and mahogany all around.

But it has modern amenities and engineering, including LED deck and floor lighting, a modern Chrysler six-liter V8 that generates 375 horsepower, and some cleverly concealed storage bins for food, wine and garbage.

Bergensen said he also found room to add sternward-facing seats in the rear cockpit that face the forward seating at the rear of the cockpit. That’s a feature the original Shepherds did not have, he said. The new Shepherd’s top speed will be between 48 to 50 mph, Bergersen said.

He estimated the 22-footer will be completed sometime next spring and will sell “somewhere south” of $200,000.

But to bring the Shepherd back to life required some cannibalization.

Bergersen said he hunted down old Shepherds beyond restoration, and pulled them apart to create the patterns necessary to create new Shepherds.

He found the pattern boat for the 22-footer in upstate New York. He’s now processing the carcass of a ruined 27-foot Shepherd he recently found in Minnesota.

Bergersen said he’s aware of Shepherds built in the sizes of 22, 24, 27 and 30 feet. Old catalogs found online showed that Shepherds came in a number of lengths from 15 1/2 feet to more than 50 feet long.

In addition to building Shepherds, the Bergersen Boat Co. is also creating parts for the classic Shepherds.

He showed a front light fixture that he salvaged. He blocked it with wood and cut it in half to turn it into a mold for metal casting.

His goal, he said, was to create authentic metal fixtures for Shepherds.

Shepherds are not common on Geneva Lake right now.

Of the more than 3,000 power boats that ply Geneva Lake, Bergersen said he knows of a dozen Shepherds that make their summer homes on Geneva Lake. But the numbers have been growing, he said. As recently as 12 years ago there were just two.

Now, in addition to building a Shepherd, Bergersen is renovating a 30-foot 1959 Shepherd for a Geneva Lake owner.

“It would be neat to see them become popular again,” he said.

Olivia and Lars Bergersen, owners of the Bergersen Boat Co., and now Shepherd Boats, stand in the cockpit of the Shepherd boat now being built at Bergersen. (Photo by Chris Schultz/Regional News)