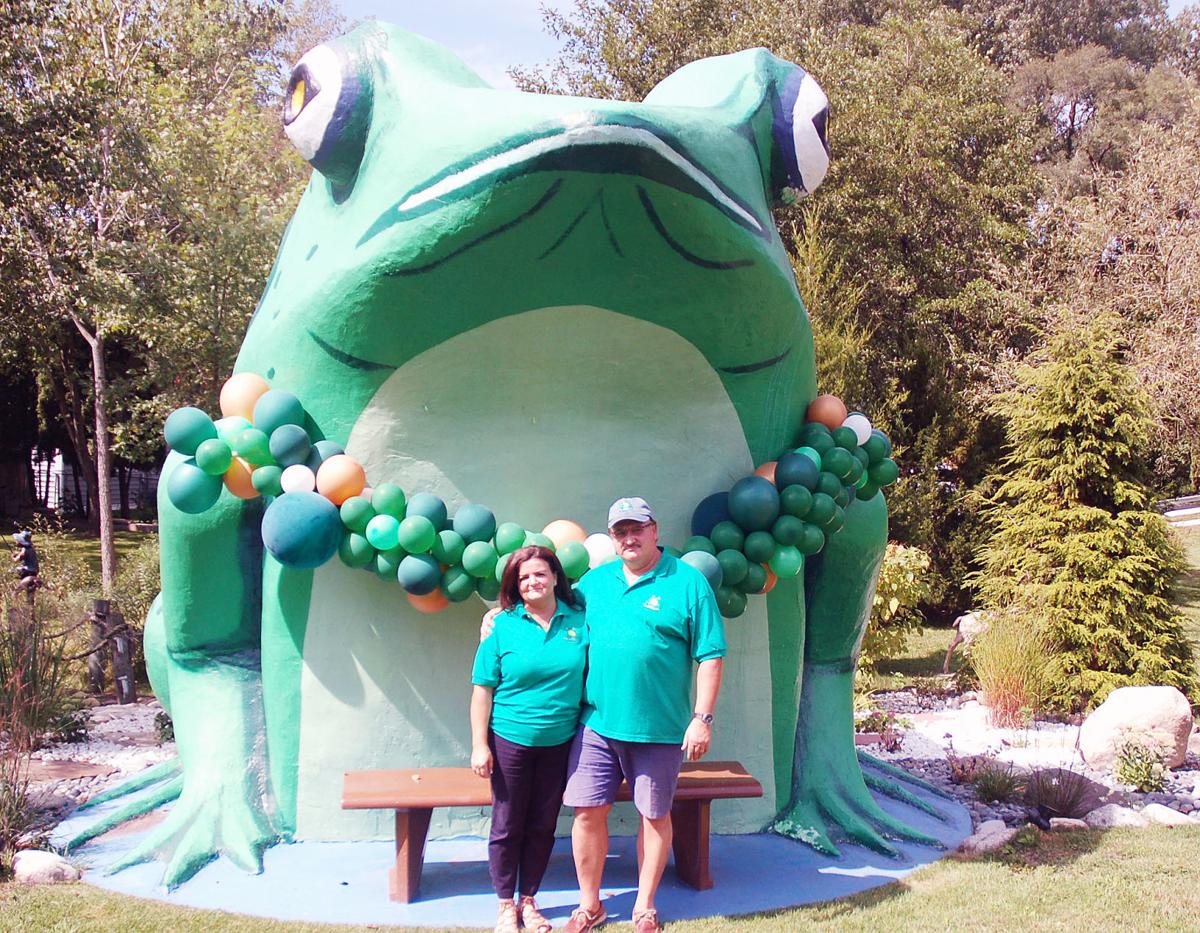 Lidia Pastiu, left, and Nick Pastiu at the foot of their frog, newly named "Fontana C. Frog," in August after a community content to name the local mascot. 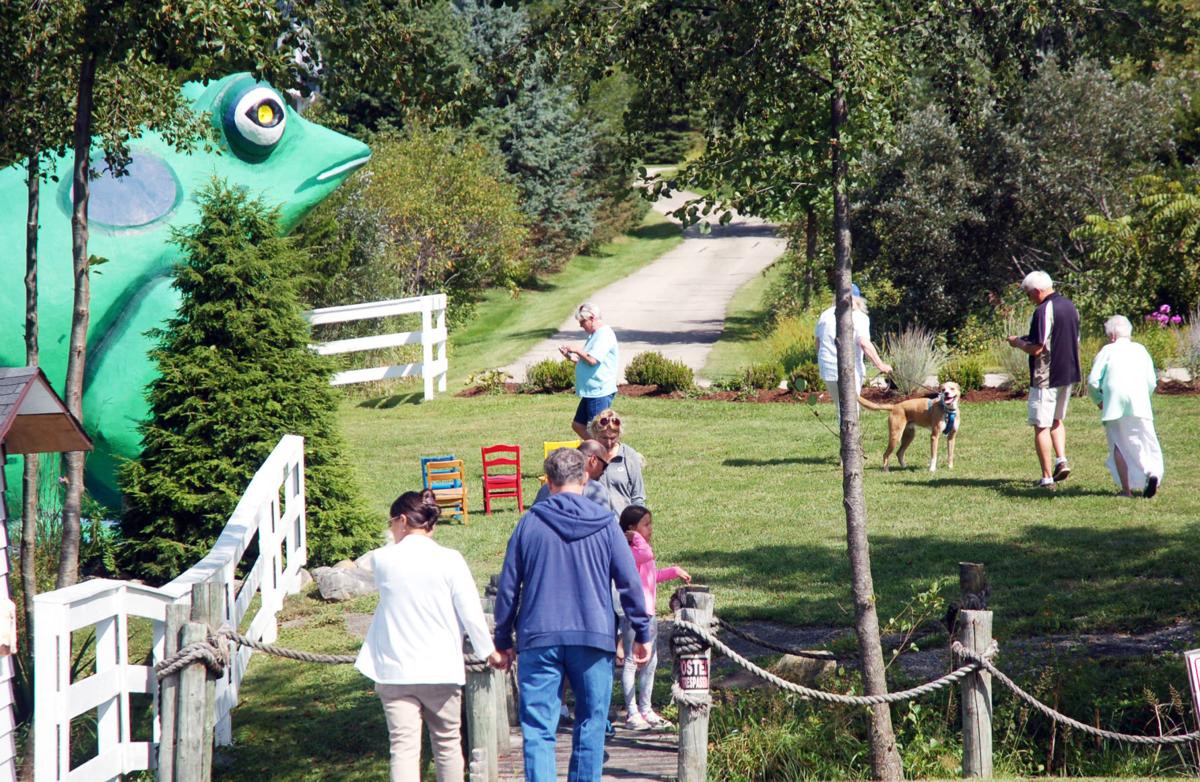 Guests walk over the grounds around the Fontana frog just prior to the frog's official naming and dedication by owners Nick and Lidia Pastiu on Aug. 31. 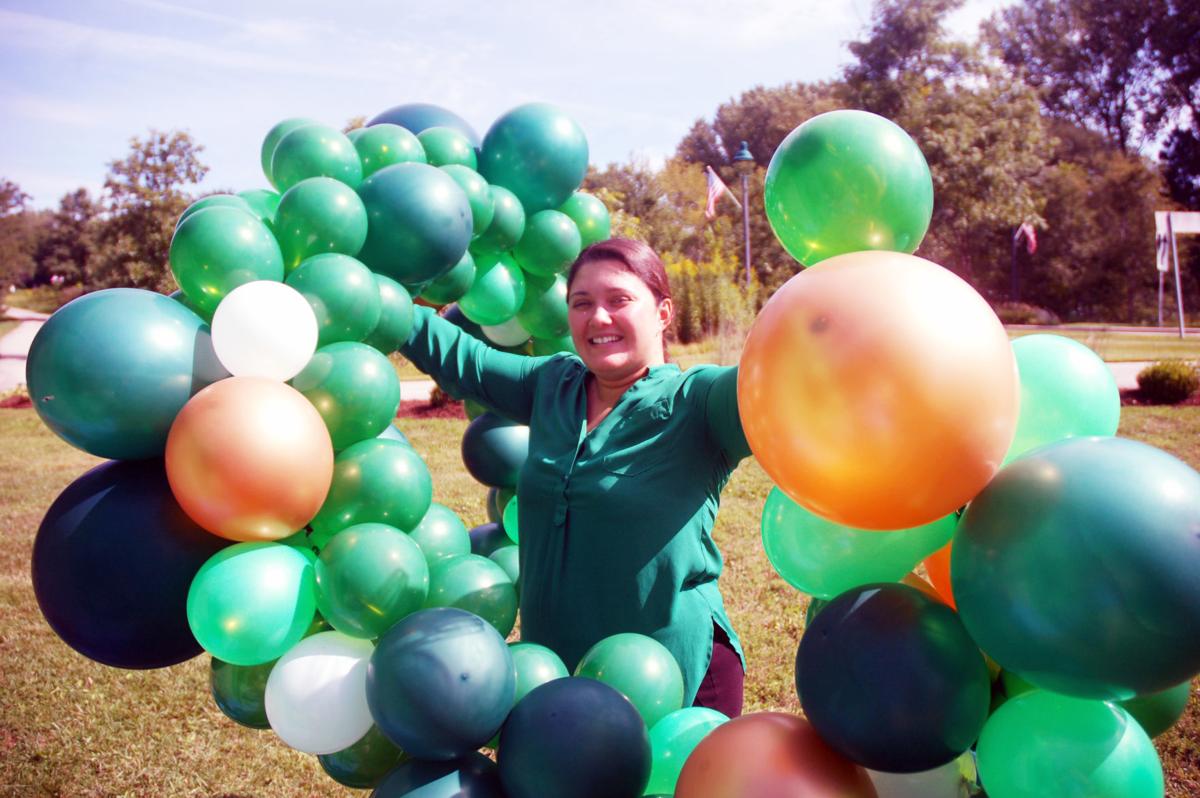 Monica Martineau, an employee of Nick's Upholstery, holds out a balloon necklace that adorned Fontana C. Frog during the naming ceremony on Aug. 31 in Fontana. 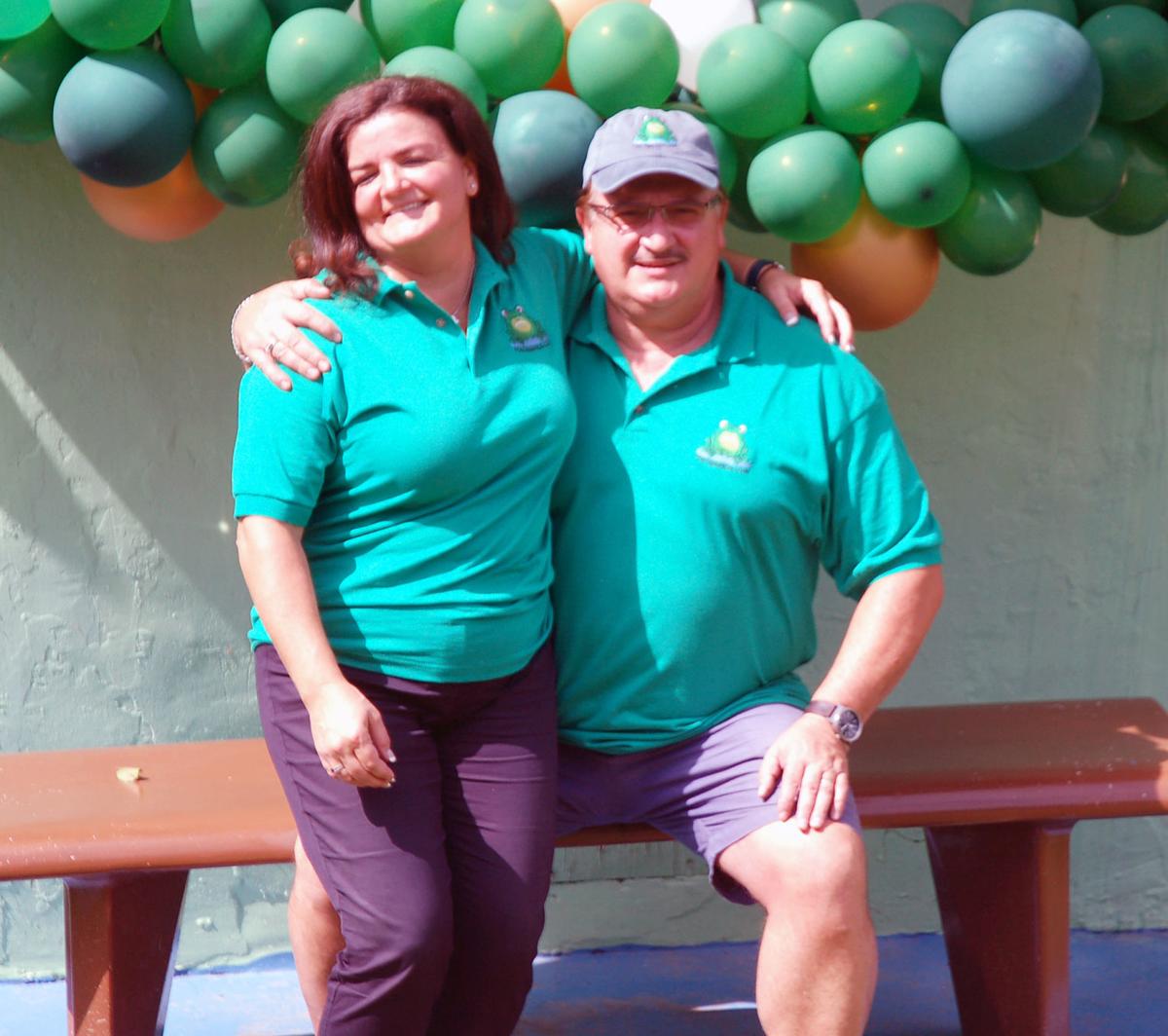 FONTANA — Wearing a garland of balloons, the Fontana frog was the center of attention Aug. 31 at a christening party thrown by frog owners Nick and Lidia Pastiu.

The Pastius, who own Nick’s Upholstery & Lidia Design in Highland Park, Illinois, bought their Fontana shop and the frog at 543 Valley View Drive in 2016.

The store and the frog are right along State Highway 67.

A frog-naming contest in May sponsored by the Pastius brought them more than 100 possible names for their over-sized amphibian. They selected seven finalists, including Frogtana, Hoppytana, and Frederick, or Fred.

But in his conversations with local residents, Nick Pastiu said he realized that residents had already given the frog a name.

“Everyone I talked to called it the Fontana frog,” Pastiu said. “We could have given him another name, but I think everyone would still think of him as the Fontana frog.”

And so with a little pomp and some ceremony, the frog was officially named Fontana C. Frog.

“Fontana C. Frog is our community frog. Always has been, always will be. And now it’s official,” she said at the dedication.

Norma Gowlett of the Fontana library was the guest of honor. Gowlett organized the Fabulous Fontana Frog Contest, and the Pastius said they were grateful for her efforts.

“In May we were overwhelmed with the number of names and stories we received,” Lidia Pastieu said.

They credited Gowlett with getting everyone in Fontana and the surrounding area involved with Fontana C. Frog.

They gave her an engraved brass Key to Frog Hollow with a decorative wooden case. The key confers upon Gowlett honorary Frog Hollow citizenship, Pastiu said.

Fontana was once known as Frog Hollow because of a large number and varieties of frogs that lived in a marsh were the Abbey Resort & Avani Spa are now.

About 45 people showed up for the frog naming.

Visitors got to admire the dark green 14-foot tall frog with the worldly-wise stare. Mr. Frog has been setting on Valley View Drive since 1964.

Before becoming a community icon, the frog, made mostly of chicken wire and plaster, was a starter shack for a miniature golf course and was later used as a concession stand and a fireworks stand.

Guests had their photographs taken with Mr. Frog both before and after the naming ceremony.

Picnic food and ice cream were served after the dedication.

Fontana C. Frog hats, T-shirts and other memorabilia were for sale in the Pastius’ shop, which specializes in furniture. In addition to naming the frog, the Pastius also renamed their Fontana business Lake Home Living.

Many of the attendees were locals, like Joe and Debbie O’Malley of Fontana and Sue Lehmann-Hurkman, formerly of Fontana and now of Williams Bay, who recalled when the frog was the starter shack for a putt-putt miniature golf course that occupied what is now a lush green lawn with a spring-fed creek next to the Pastius’ store.

A few said that although they lived in the area, they were not aware of the frog until the naming contest.

JoAnn Weis, formerly of Fontana now of Walworth, said she raised her family in Fontana, but was not aware of the frog then. Now retired, she has taking a renewed interest in the area. And that includes a giant frog.

At least two did not know the event was happening until they got to the ceremony.

“We just ran into this. This is cool,” said Karen Kloes, who, with her partner Kent Christensen, rode their Harley-Davidson motorcycles down from Minoqua.

Nick Pastiu said he fell in love with the frog almost immediately after buying the property, despite the frog’s faded paint and rundown condition. He began to realize the importance of the frog when he and his employees started work last summer.

As they were working, people would slow down and wave or they would stop and ask if the Pastius were planning on reopening the miniature golf course.

“It’s not just a landmark,” Pastiu said. “It triggers a lot of good memories.”

Now that Fontana C. Frog has an official name, Pastiu said he hopes the frog becomes the face of not just Fontana, but the entire west side of the lake.

Fontana C. Frog didn’t just get a name, he got a website, too. Frog fans can follow him on fontanafrog.com, which was launched the same day as the dedication.

“I want to see the west side of the lake flourish,” Pastiu said.

Lidia Pastiu, left, and Nick Pastiu at the foot of their frog, newly named "Fontana C. Frog," in August after a community content to name the local mascot.

Guests walk over the grounds around the Fontana frog just prior to the frog's official naming and dedication by owners Nick and Lidia Pastiu on Aug. 31.

Monica Martineau, an employee of Nick's Upholstery, holds out a balloon necklace that adorned Fontana C. Frog during the naming ceremony on Aug. 31 in Fontana. 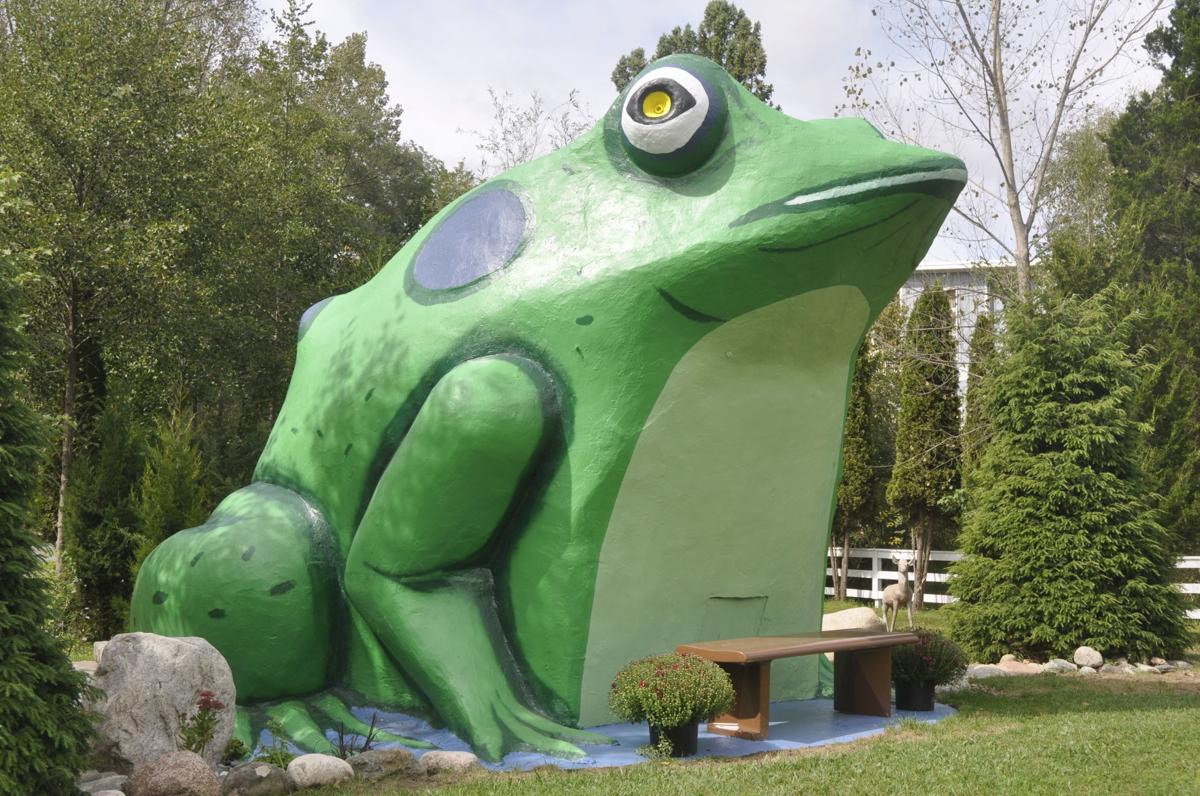 The frog statue overlooking state Highway 67 in Fontana has been around since the 1960s, but never had an official name.