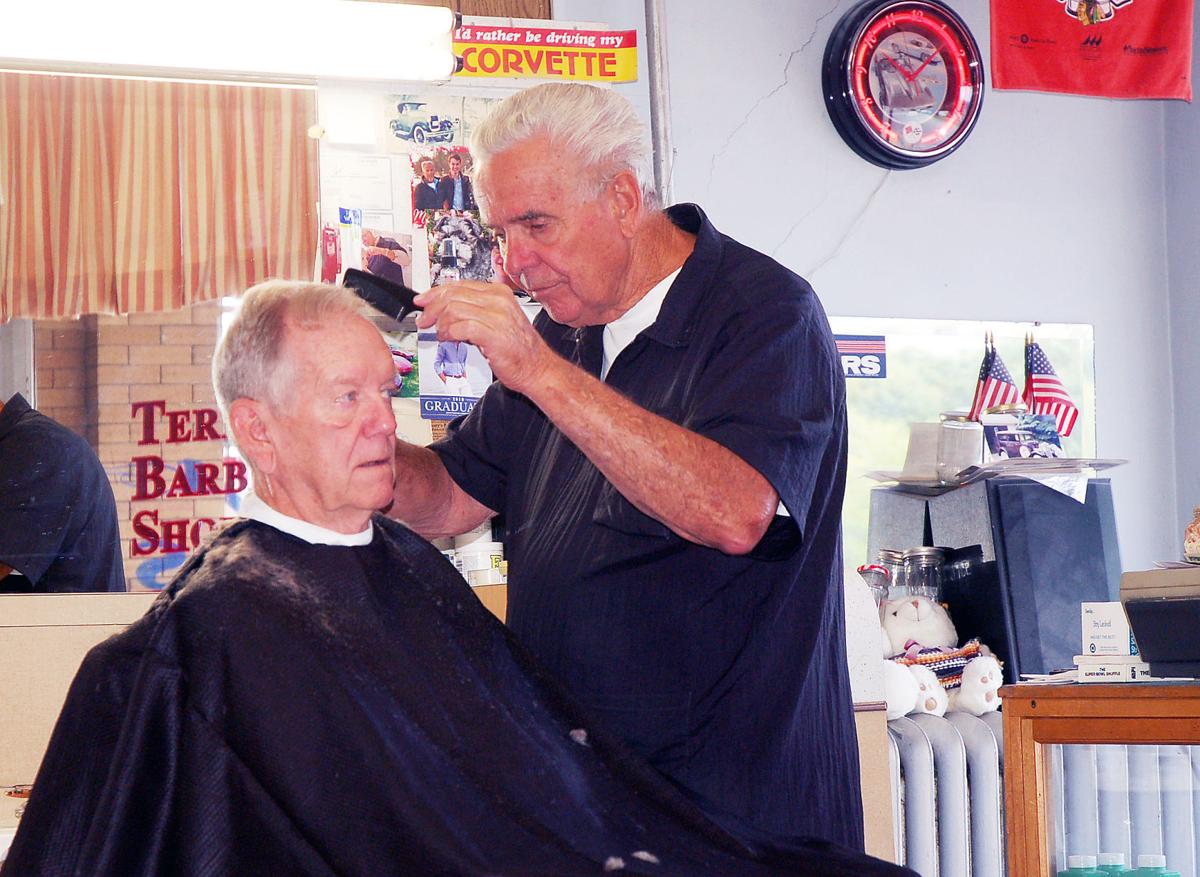 Terry Thomas, right, concentrates on cutting customer Don Mason's hair inside the Williams Bay shop where Thomas has been doing business for 50 years. 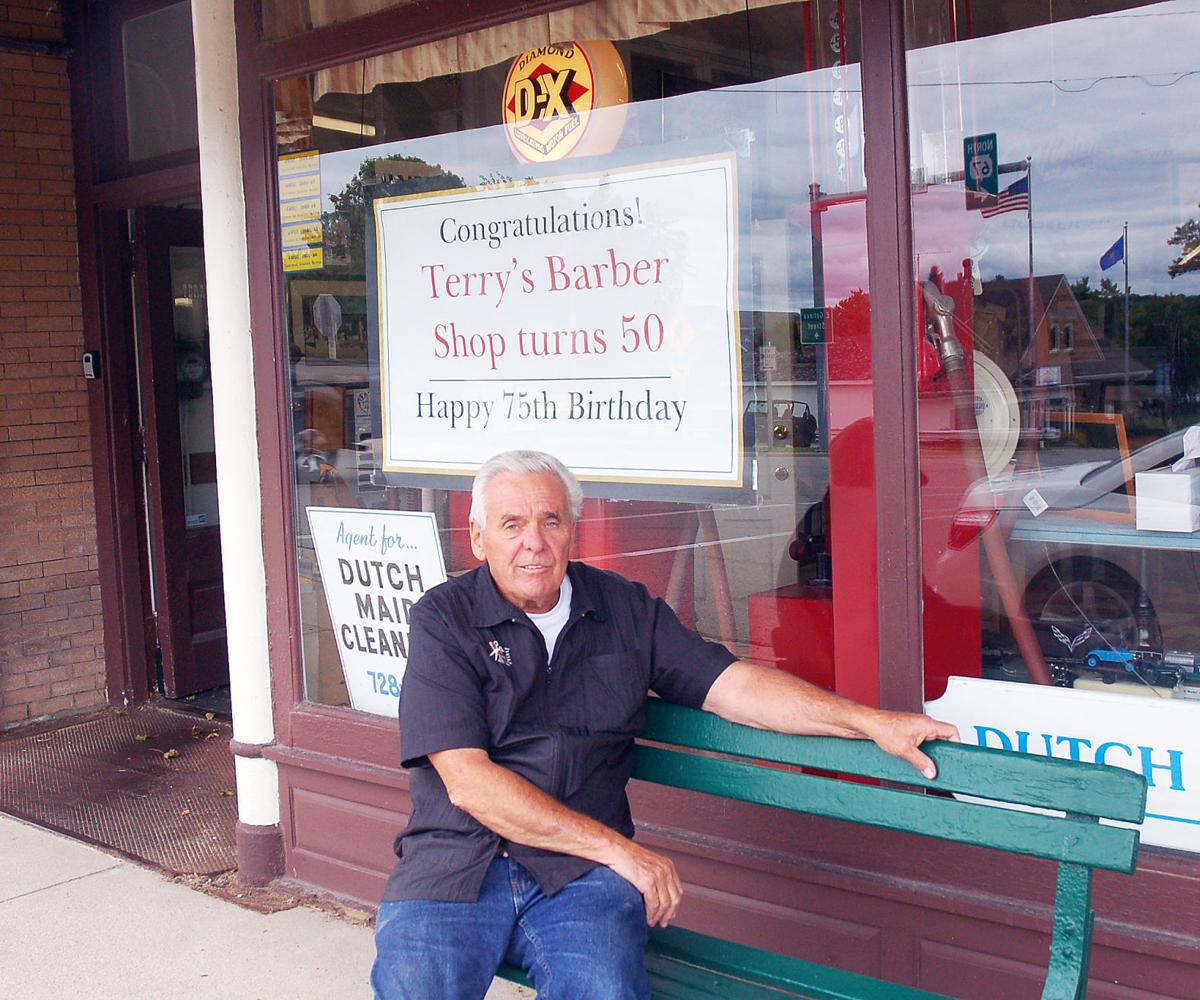 Terry Thomas takes a short break under a sign that announces the 50th anniversary of his barbershop in Williams Bay. 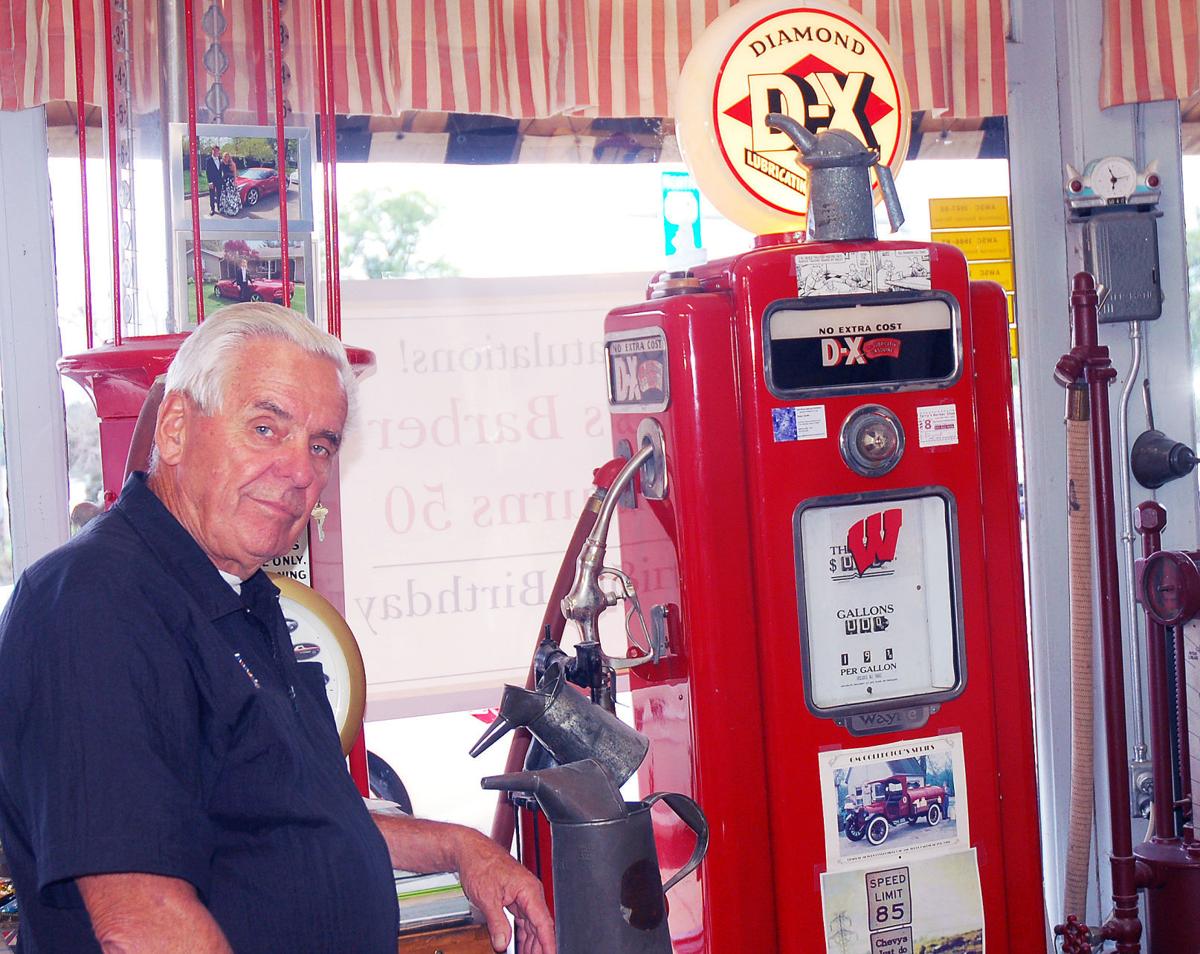 Terry Thomas and one of the gas pumps he keeps in his Williams Bay barbershop, which has become a bit of a museum over the years. 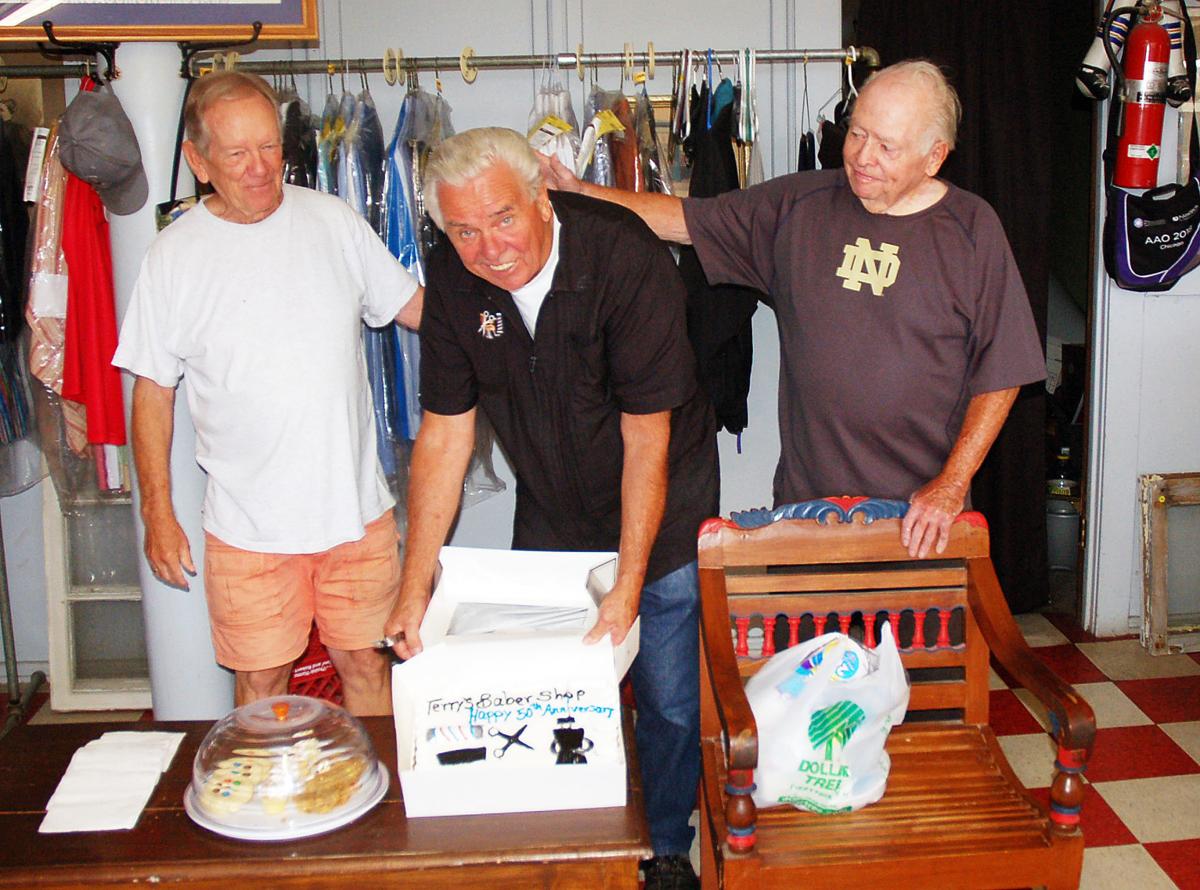 WILLIAMS BAY — For about half of the time that Williams Bay has been a village, customers have been getting their hair cut at Terry’s Barbershop.

But owner Terry Thomas shows no sign of slowing down.

While Terry has been cutting hair at the same location for 50 years, the location has been a barbershop much longer — almost as long as Williams Bay has been a village.

The first barbers to occupy the space were two brothers who opened their shop in 1920. They sold the shop to the next owner, Bill Elbert, who cut hair there for for 44 1/2 years before selling it to Terry on Sept. 1, 1969.

The price list is simple. Haircuts are $15 for adults and $13 for seniors and children 11 and under. No special cuts or shampoos.

The shop is closed Wednesdays and Sundays.

On a busy Friday, regular customer Bill Donohue showed up with a cake on Sept. 6 from the Lakeland Bakery in Elkhorn. On the white frosting were the words “Terry’s Barbershop Happy 50th anniversary,” and the cake was decorated with a barber pole, scissors, comb and barber’s chair.

Donohue said Terry’s clientele are like a big club.

“Everybody is on a first-name basis,” Donohue said.

And there is plenty of good-natured ribbing that takes place among them.

“You got a few more years in you, don’t you Terry?” customer Don Mason asked as Terry trimmed around his ears.

Terry trims the last bits of hair behind ears and along necklines the old-fashioned way — with a straight razor and hot shaving cream.

In Terry’s Barbershop, conversations cover the gamut, from politics to sports.

“Customers go home, and their wives will ask, ‘What happened at the barbershop?’” Terry said.

The brick building where Terry has his shop is one of the oldest still standing in Williams Bay. Called the Bay Center, it began construction in 1903 and was completed in 1906.

Inside, Terry’s Barbershop is as much a personal statement and museum as it is a working business.

A glass case encloses some model cars and mementos. Three antique gas pumps stand nearby. No, they do not work. Terry just collects them.

With every haircut, there is plenty of bantering and kidding among the regulars.

“He’s a much better guy than a barber,” customer Keith Pozulp of Williams Bay teases.

Pozulp said Terry has been cutting his hair for 33 years, and, Pozulp jokes, he is terrible at it.

“Look at this,” Pozulp said, pulling off his cap and showing a perfectly good haircut. “That’s terrible,” he said.

Then Pozulp got serious about his favorite barber.

Pozulp originally was from Chicago. He was visiting Williams Bay and needed a haircut. He heard of Terry and stopped by. Now living in Williams Bay, he has been stopping by regularly since.

Cliff Woodbury, one of Terry’s newest customers, stopped by for one last haircut before moving back to Chicago.

“That was the best haircut I ever got, last time,” Woodbury said.

He came back to see if he could get another. In less than 20 minutes, Woodbury was out the door, still a satisfied customer.

In addition to barbering, Terry also provides a drop-off and pick-up spot for the Dutch Main Laundry in Elkhorn. Customers will stop by, not for a trim, but for a collection of freshly laundered shirts and pants.

Terry also runs a car storage business north of Lake Geneva in the Springfield area, where he lives.

“In a small town, you have to have a sideline, or you won’t make it,” he said.

Terry has got a head of carefully clipped white hair, and a ready, if somewhat crooked, smile that hints at wisdom gained from 50 years of listening to barbershop gossip.

He does not believe in global warming and he is no fan of Gov. Tony Evers. But that is just barbershop talk.

“Williams Bay has been very good to me,” he said.

His two daughters, Tracy and Tania, live in the area, and his wife, Lydia, calls every now and then, just to chat.

Thomas said he graduated from Lake Geneva High School. He worked in a machine shop for a year, then worked for General Motors for two years.

Then he went into the military.

But one thing he always wanted to do was cut hair. Once out of the military, he went to barbering school in Rockford, Illinois.

He said his mother cut his hair until he was in high school. Then, for his graduation photo, he went to a barber for the first time.

He recalled that the barber’s name was Ken Weeks — “a nice, nice old gentleman.”

Barbering is the best job in the world, Terry said.

“It’s cool in the summer, it’s warm in the winter,” he said with a smile. “And every 20 minutes, I have someone new to talk to.”

Terry Thomas, right, concentrates on cutting customer Don Mason's hair inside the Williams Bay shop where Thomas has been doing business for 50 years.

Terry Thomas takes a short break under a sign that announces the 50th anniversary of his barbershop in Williams Bay.

Terry Thomas and one of the gas pumps he keeps in his Williams Bay barbershop, which has become a bit of a museum over the years.