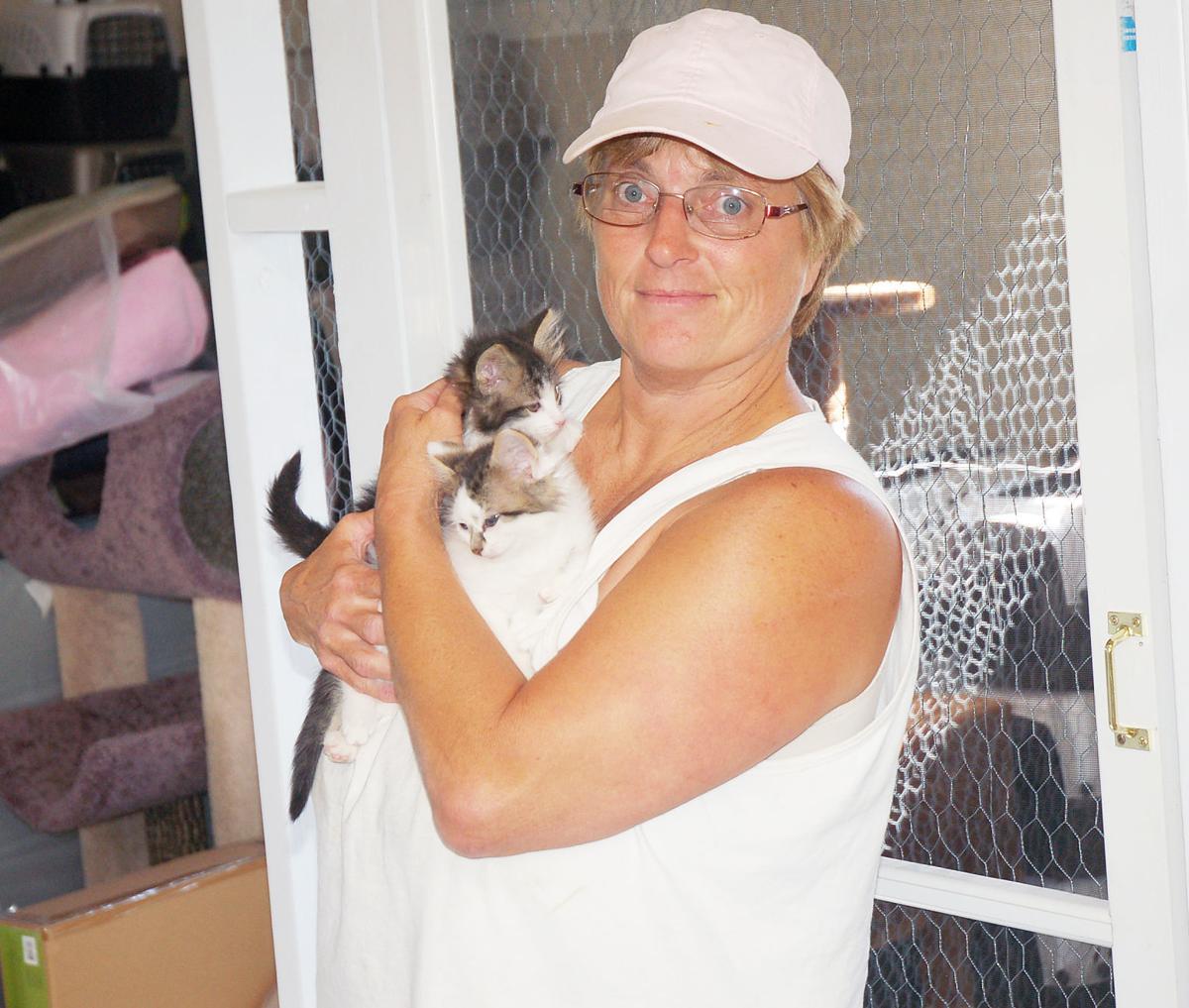 Kris Toledo, who runs a cat rescue in rural Walworth, is shown with two kittens up for adoption, Noah and J.R., in the rescue’s Cat Barn. 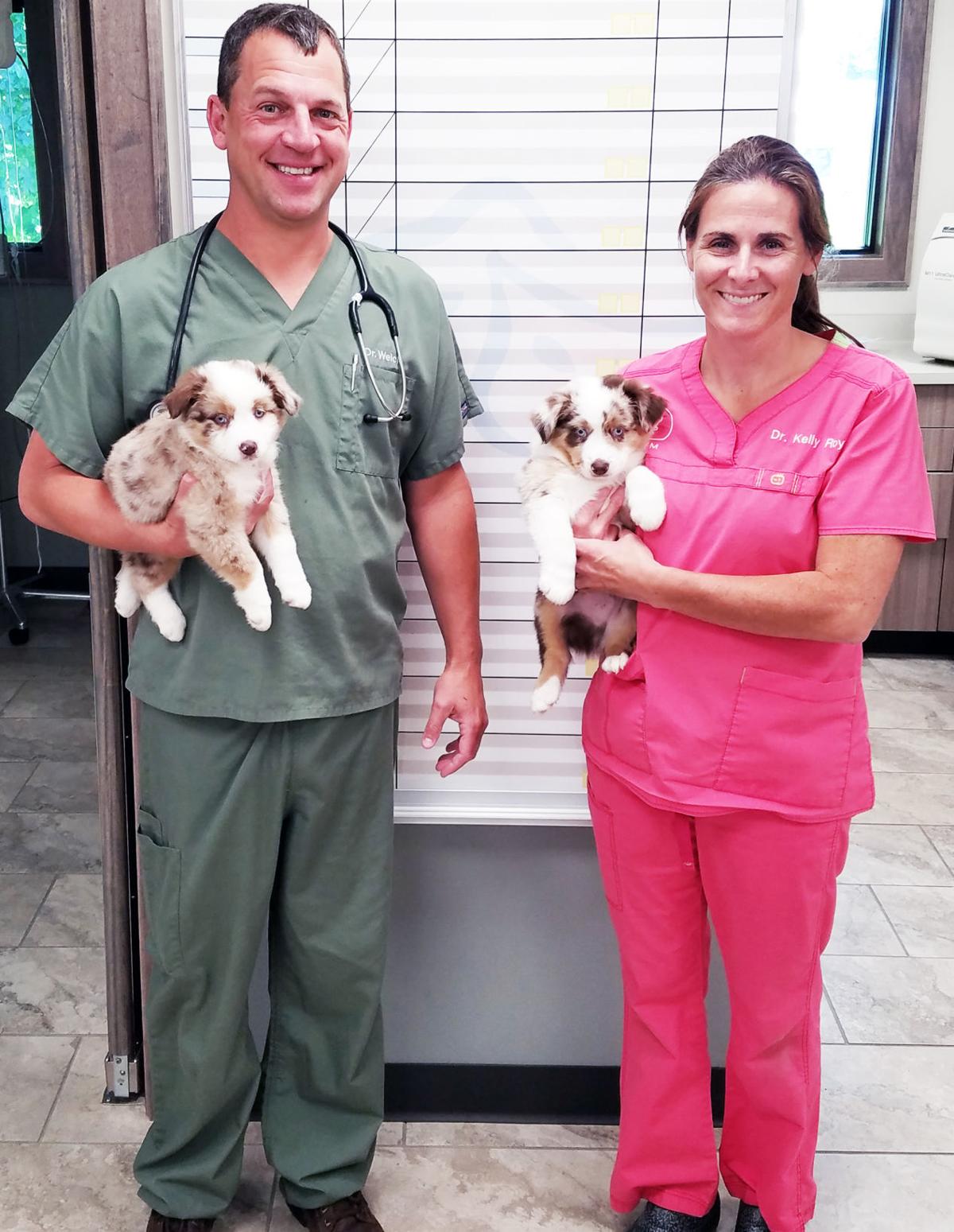 WALWORTH — Almost every day, somewhere in Walworth County, unwanted cats are being dumped in rural areas.

The cats are exposed to the weather, predators and other dangers.

“There are a lot of abandoned cats in Walworth County,” said Kris Toledo, a committed animal lover in rural Walworth. “People do not control the pet population.”

Three years ago, Toledo tackled the problem head on. She opened a no-kill cat rescue shelter.

Kris and her husband, Manuel Toledo, own five acres, which is the home to their landscaping business, Manuel’s Handyman Service.

The shelter is run by the family’s foundation, known as the Toledo Keeping the Faith Charity Foundation

The cat rescue’s first goal is to trap and neuter feral and stray cats so they will not contribute to the county cat population. She then finds them a place to stay.

Stray cats have lost their homes but are used to humans. Feral cats grow up wild and tend to avoid humans. Some rural residents do not mind having cats around, because they control the rodent population.

But if left unchecked, the cat population can get out of control.

“The kitten problem is huge,” said Mary Rybicki of Burlington. “I think what Kris is doing is desperately needed.”

Rybicki is fostering five kittens for the cat rescue.

Rybicki said she met Toledo last year when Toledo was called in to help a neighboring owner of a horse farm who had a colony of cats she needed removed from the property.

Toledo was able to trap and remove all of the cats humanely.

“Kris stepped up and helped her trap the cats and remove them,” Rybicki said. “Kris was unbelievably kind.”

Toldeo is working to promote awareness of the trap-neuter-release program.

Six volunteers help care for the cats and maintain the rescue, Toledo said.

In addition to controlling the feral cat population, the rescue extends its help to domestic cats. The shelter will help cat owners who cannot afford to spay or neuter their pets. It will give financial help to an owner whose cat needs to be euthanized.

The cat rescue also takes in foster cats while their owners seek a new place to live. And the rescue provides shelter for cats whose owners are currently homeless.

Fees for cat foster care, vaccinations or euthanasia are based on a person’s ability to pay.

The rescue has about 30 cats up for adoption.

Cats that have not been adopted after a year join the Toledo cat colony. Toledo said she has 28 cats who live on the property and are considered part of the family.

The four buildings in the rescue are clean inside and out.

Toledo said she uses large amounts of bleach, Lysol and Clorox wipes to make sure the buildings are clean. There is not the slightest whiff of cat urine.

The Toledos are now renovating a building called the Kitty Shack. Domesticated cats hang out there during wet or cold weather. The Kitty Shack has elevated cat walks and a partial second floor because cats like to sleep up off the ground.

Windows are being added so the cats can look outdoors when they want.

The Chicken Coop (there are no chickens) is where newly arrived cats are kept in quarantine until they are checked for communicable diseases. Cats receive medication in the Cool Cat Shed.

Foster cats, domestic strays up for adoption, and feral cats are housed in the Cat Barn.

During the winter, the Toledos also set up straw enclosures covered in tarps with heated water trays and food supplies for feral cats who do not like to be indoors.

Life for feral or stray cats can be miserable. They are susceptible to a number of maladies and disorders when they are in the wild.

Toledo said she recently saved a cat that had open wounds on its ears.

“I thought the cat had been in a fight,” she said.

Instead, the cat had ear mites so bad that it had scratched its ears raw trying to get rid of them. Medication provided by veterinarians who support Toledo’s rescue took care of the problem.

The cat is now awaiting adoption.

Toledo’s main veterinarians are Chris Welch and Kelly Roy-Welch, who practice at the Geneva Lakes Animal Hospital in Walworth. When the Walworth clinic is busy, Toledo also has arrangements to take her cats to the Delavan Animal Clinic or Precision Veterinarian Services in Madison.

“Kris is definitely taking on a big project,” Welch said. “This area in Walworth County has an overpopulation of cats and feral cats.”

Welch said he was impressed with the facility that Toledo has set up.

“She’s got a beautiful facility,” he said.

Welch said the Walworth veterinary clinic checks and treats between 15 and 25 cats a week from Toledo’s rescue.

As for the costs of sterilizing cats, Toledo has footed a lot of it herself, Welch said.

Christine Croswell, a receptionist at the Delavan clinic, said she visited Toledo’s rescue and was impressed with its cleanliness.

“I think she does a fabulous job,” Croswell said of Toledo. “I think she goes above and beyond.”

She added: “It’s beautiful out there, and they keep improving it.”

According to Toledo, the rescue spends about $40,000 a year on cats.

Over the past two years the rescue has cared for about 250 cats per year. That number is not going down.

Kris Toledo, who runs a cat rescue in rural Walworth, is shown with two kittens up for adoption, Noah and J.R., in the rescue’s Cat Barn. 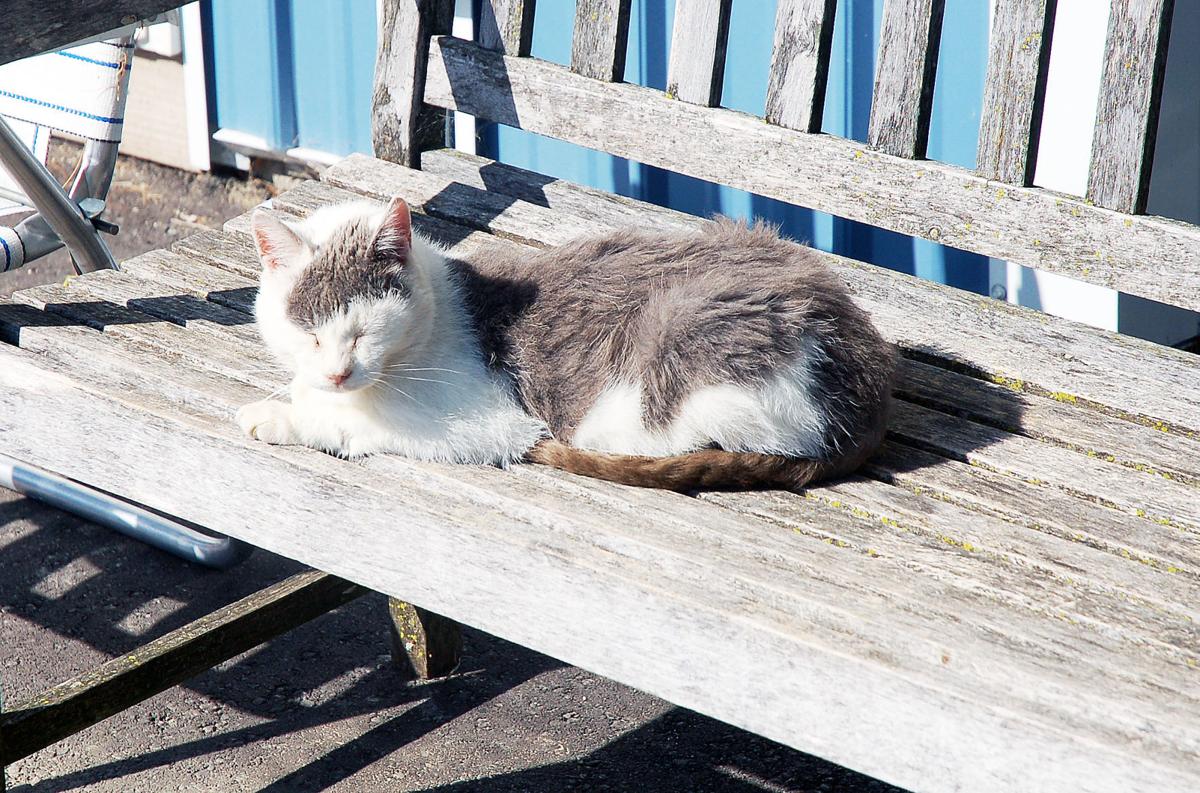 Buddy, a member of Kris Toledo's cat rescue colony, soaks up some sun on a bench outside of the Cool Cat Shack on the Toledo property in rural Walworth.