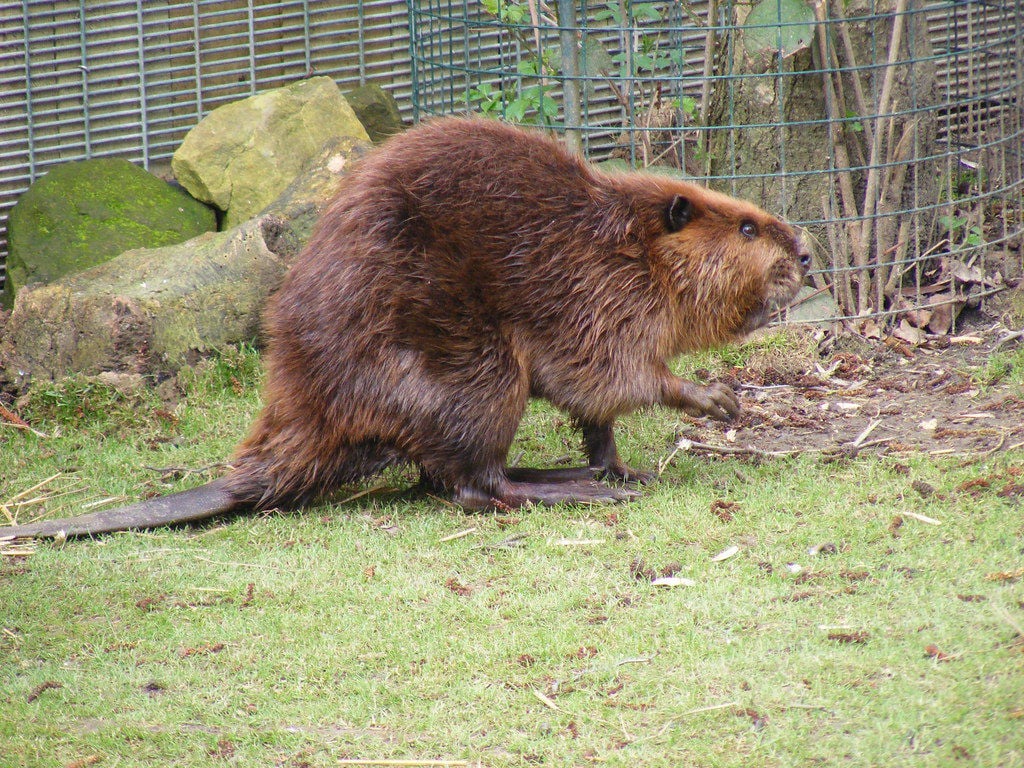 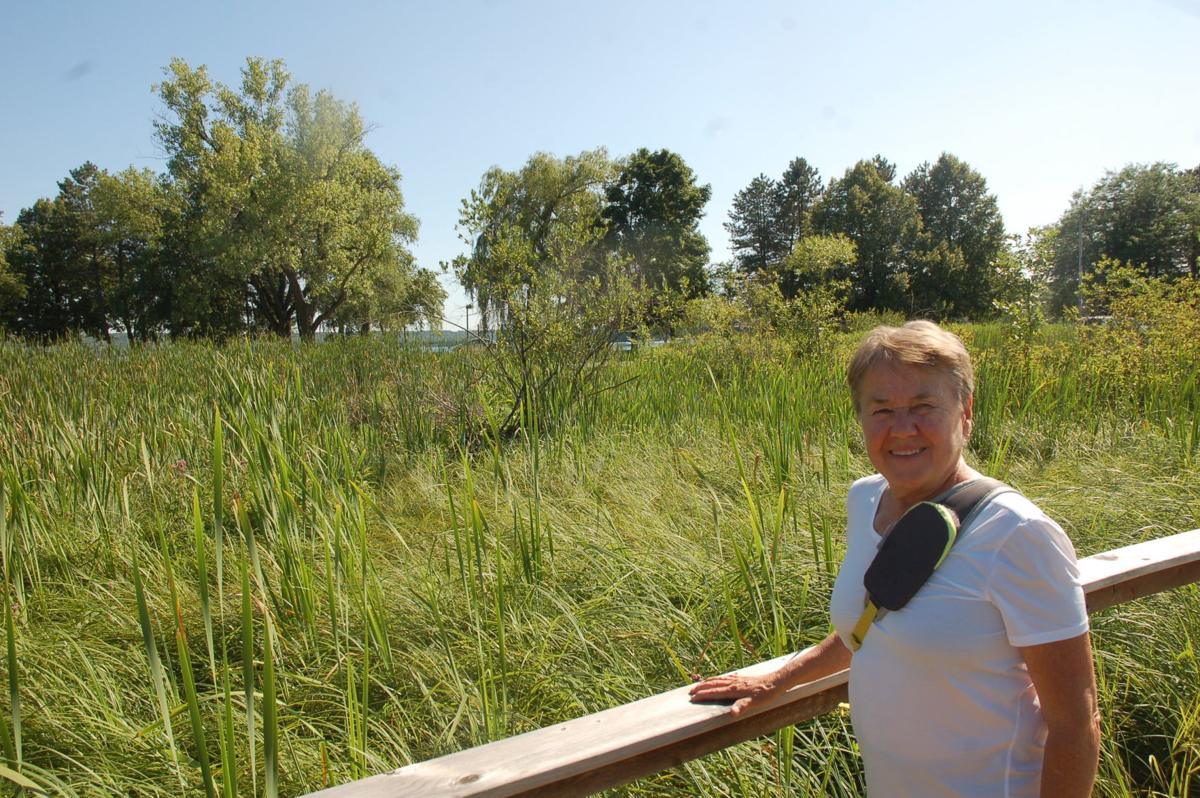 Joanne Kristoffersen, Kishwauketoe volunteer and beaver advocate, is shown at the site of a well-camouflaged beaver lodge in the Kishwauketoe Nature Conservancy. 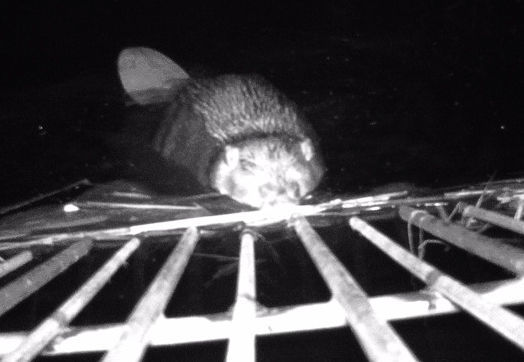 A beavers is caught by a wildlife camera April 20 while nosing around a grate on Harris Creek in the Kishwauketoe Nature Conservancy in Williams Bay. 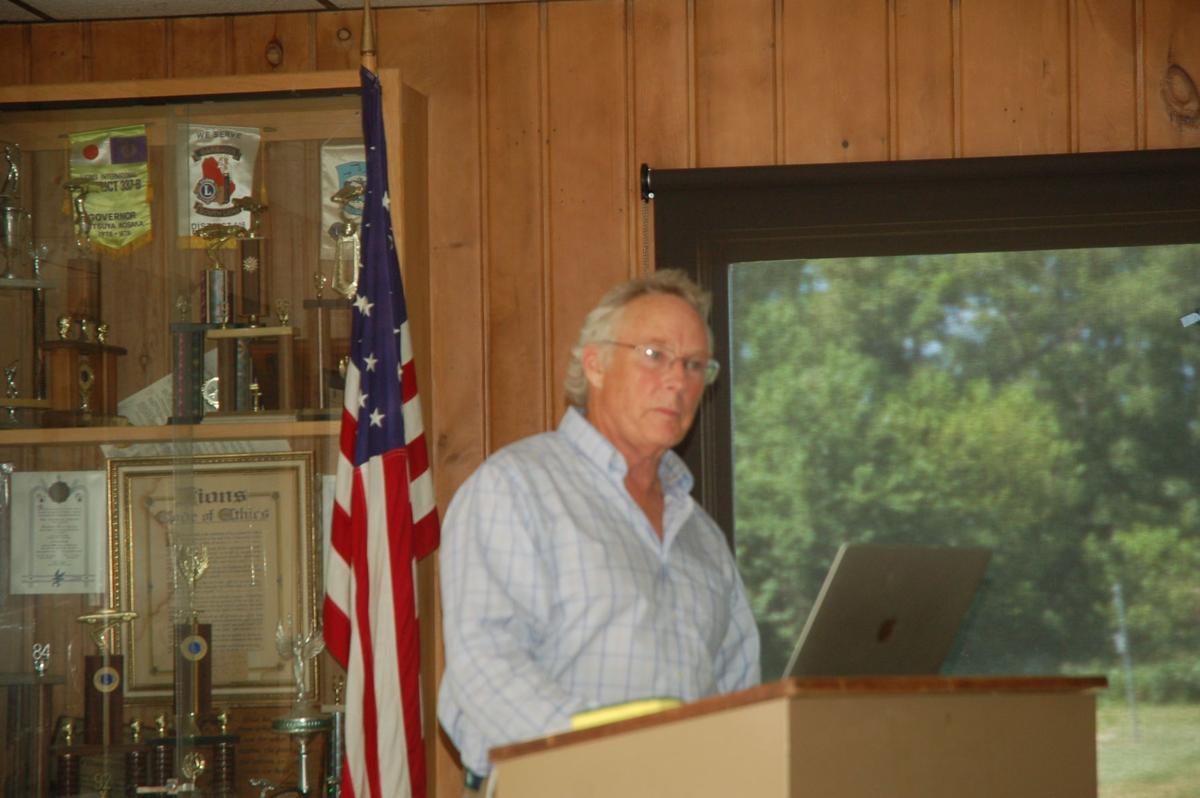 Bob Boucher, an expert on beavers, gives a presentation on the dam-building creatures Aug. 1 at the Lions Field House in Williams Bay.

And they are pretty darn good at it.

Bob Boucher, a beaver expert, explained the benefits that beavers bring to wetlands during an Aug. 8 presentation at the Lions Field House, sponsored by the Kishwauketoe Nature Conservancy and the Barrett Memorial Library.

Boucher is a strong advocate for beaver restoration in the western Great Lakes states of Wisconsin, Michigan and Minnesota.

Boucher has a master’s degree in water resource management from the University of Wisconsin. He is also the retired director of the Cedar Lakes Conservation Foundation, founder of Milwaukee Riverkeeper, and a member of the Beaver Institute national board of advisers.

The timing for Boucher’s presentation was right, because Kishwauketoe currently is home to a beaver family. The lodge is on the south side of Harris Creek, on the east end of Kishwauketoe.

Harold Friestad, chairman of the Kishwauketoe board of directors, said he and the conservancy’s volunteers are learning ways to make sure the beavers are comfortable in their surroundings.

They are also learning how to keep the beavers from becoming a nuisance.

Beavers are viewed as pests by some property owners because they dam up streams, causing flooding. The animals also cut down trees, and they set up their lodges without regard to property lines, Boucher said.

In October and again in March, a beaver clogged up the culvert that carries Harris Creek across Geneva Street to a drainage swale, Friestad said.

The backups caused some flooding along Harris Road and Geneva Street and kept the village’s public works crew busy pulling sticks and branches out from the culvert to restore proper water flow.

A wet fall and early spring did not help.

“We contacted the DNR and they said, ‘You consider this a nuisance?’ And we said, ‘Yes,’” Friestad said.

The DNR gave Friestad a list of certified trappers. DNR regulations are that if an animal is trapped, it must be killed.

Friestad said that in the end, the trapper did not get the beaver. The 60-pound female beaver was hit by a car and killed.

Joanne Kristoffersen, a Kishwauketoe volunteer, went to Friestad and argued that the conservancy should work with the beavers — not kill them.

“Why aren’t we doing it the Aldo Leopold way?” she asked.

As an admirer of legendary conservationist Aldo Leopold, Friestad said, it changed his attitude about beavers. He said he talked with Boucher as well, learning how beavers increase the numbers of species in an area with their engineering prowess.

And those wetlands create homes for a wide variety of insects, fish, reptiles, amphibians and mammals.

“No other animal has the beaver’s ability to increase the carrying capacity of the land,” he said.

Before the arrival of Europeans, beavers were nature’s landscape engineers in North America. Beaver dams and ponds dotted the landscape, creating wetlands and habitat along rivers and streams.

“Their ponds create habitat for fish and aquatic wildlife,” said Boucher, who has a master’s degree in water resource management from the University of Wisconsin.

Muskrat and river otter live in or near beaver ponds, Boucher said. As do predators, such as wolves, bears and bobcats.

During the 1700s through the mid-1800s, beavers were hunted to near extinction in some areas because of the demand for beaver pelts in Europe. When beavers were almost wiped out, it changed the appearance of the land, Boucher said.

Some of the complaints against beavers have been shown to be wrong, Boucher said. One theory said that beavers dam up water and keep game fish, trout in particular, from spawning. But studies have shown that the dams are porous and present no barrier to fish.

“Fish find a way through beaver dams,” he said.

That’s not to say that everything a beaver does is welcomed by its neighbors.

But there are ways to cage off waterways and protect trees from eager beavers, he said.

Kristoffersen said Kishwauketoe is going to develop its own guidelines, with an eye to protecting beaver that locate in the 231-acre conservancy.

“Harold has asked me to put together a beaver management plan,” said Kristoffersen. Fellow volunteers Danielle Simons and Jen McMannamy will also help develop the plan.

“Kishwauketoe Nature Conservancy has a habitat that beavers could thrive in,” Kristoffersen said.

Beavers are naturally cautious, shy, and come out only during late evening and early morning hours.

Little is known about the beaver family living in the lodge and pool, Kristoffersen said. However, volunteers were able to get a picture of one of them using a game trail camera with a motion sensitive shutter.

Kristoffersen said she and the volunteers are now looking for methods of ensuring that this family of beavers does not clog up Harris Creek.

Friestad said the new residents have been welcomed by many in the community. He said parents take their children to the beaver pond in hopes of getting a view of the creatures.

“We have had nothing but a positive reaction from the locals,” Friestad said.

WILLIAMS BAY – In the first two weeks of the Clean Boats, Clean Waters program aimed at reducing the spread of invasive species, more than 750…

Joanne Kristoffersen, Kishwauketoe volunteer and beaver advocate, is shown at the site of a well-camouflaged beaver lodge in the Kishwauketoe Nature Conservancy.

A beavers is caught by a wildlife camera April 20 while nosing around a grate on Harris Creek in the Kishwauketoe Nature Conservancy in Williams Bay.

Bob Boucher, an expert on beavers, gives a presentation on the dam-building creatures Aug. 1 at the Lions Field House in Williams Bay.