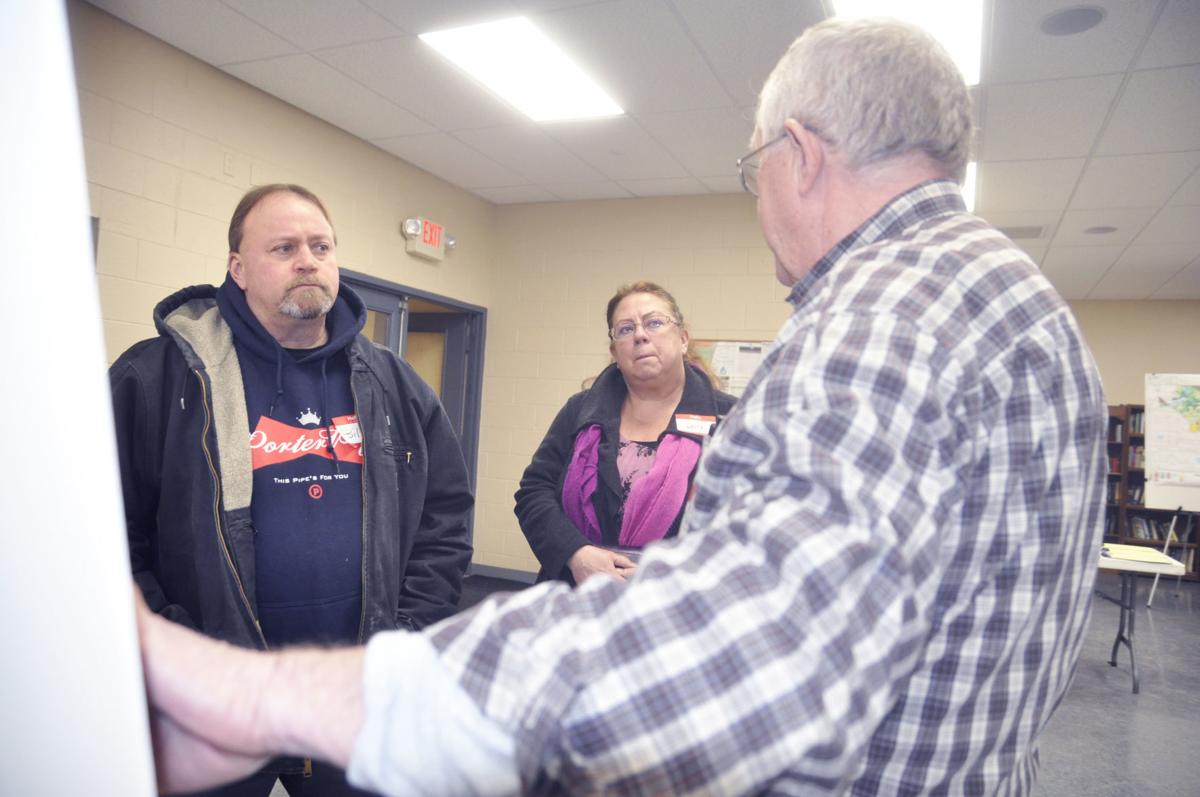 Town of Bloomfield residents William Wieczorek, left, and his wife, Judith Wieczorek, center, listen as Town Chairman Dan Schoonover uses a display board Feb. 13 to explain a proposed boundary deal with the village of Bloomfield. 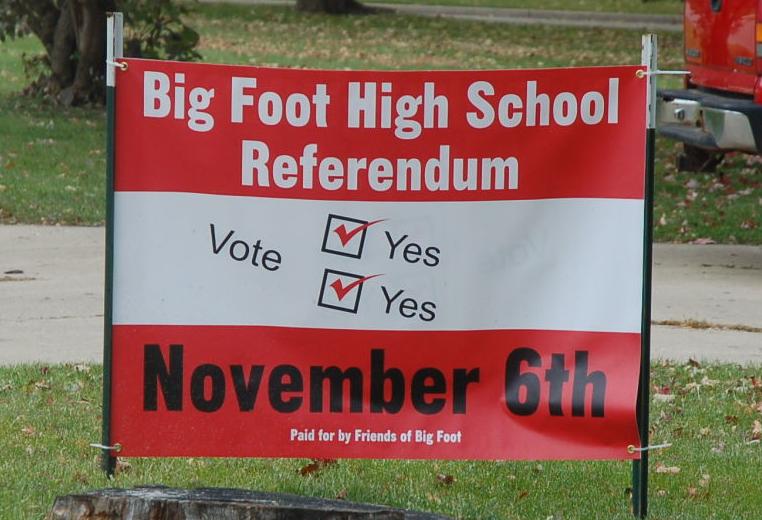 Yard signs were plentiful in the Big Foot School District in 2018 when referendum supporters raised private money in a successful push for a $9 million school district initiative.

TOWN OF BLOOMFIELD — Before voters rejected a referendum on merging with the village of Bloomfield, a paid consultant urged local officials to campaign for the measure by organizing supporters and devising a get-out-the-vote strategy.

Town and village officials jointly paid the consultant $5,000, but they dismissed most of the recommendations out of concern that actively encouraging voters to support the referendum would be improper.

Voters in the town rejected the April 7 ballot measure by a margin of 169 to 125 — with barely one-third of registered voters turning out — and dealt a possible death knell to a proposed boundary deal with the neighboring village.

An official with the League of Wisconsin Municipalities says town and village officials would have been within their rights to campaign for the referendum and to rally supporters, as long as they did so on their own time and at their own expense.

But town Chairman Dan Schoonover says officials believed that pushing a get-out-the-vote approach would have been improper.

“I feel we did everything we could,” Schoonover said. “As to if a promotion group would have helped, I would not know that.”

Although the referendum was advisory only, its demise has left questions about the future of the boundary deal, in which the town would dissolve its borders and combine with the village to create a single municipality.

Village resident Myra Janaszek, who supports the boundary deal, said local officials should have conducted more gatherings and worked harder to educate town voters about the issues behind the April 7 ballot measure.

“As far as promoting the referendum,” Janaszek said, “I think they could have done better.”

The boundary deal is designed to protect the Bloomfield area against unwanted annexation by either Lake Geneva or Genoa City. It also is intended to streamline local government and strengthen local control of future land use decisions.

The merger would reunify the town’s 1,600 residents with the village’s 4,600 residents, who broke away from the town in 2011 to create a new municipality. The new village has struggled financially with an inadequate tax base, leading to periodic discussions about reunification.

Plans for the boundary deal were announced in December, with the referendum scheduled for April 7 to solicit support from the town’s voters for dissolving their town. No referendum was held in the village because the village would not be dissolved.

The town and village agreed to split paying Lanser’s fee of $1,000 a month between November and March.

Mary Claire Lanser, owner of the New Berlin-based firm and a former New Berlin mayor, presented a draft plan that outlined a 15-point strategy for introducing the April referendum and working to win public support.

In an email to the town attorney, Lanser wrote that she could adjust those plans, if needed, to fit the town’s preferences.

“It has to feel right,” she wrote.

Similar strategies have been employed elsewhere, including in the Big Foot School District, where voters in 2018 approved a referendum authorizing about $9 million in spending on improved athletic facilities.

With the December announcement that a Bloomfield boundary deal was being discussed, the consultant produced a one-page news release and a two-page question-and-answer explanation. Officials then held public information sessions Feb. 13 and March 10 to invite public input or questions.

Lanser said her other suggestions were set aside because of concerns that government officials should not be involved in influencing voters and should only distribute information without perceived bias.

“It was not about ‘Vote Yes,’” she said. “It wasn’t about telling people what to do; it was about informing people.”

Bloomfield village attorney Brian Schuk said there are differing opinions among local governments on how much campaigning is appropriate for elected representatives in such situations.

In this case, Schuk said, Bloomfield village officials opted not to take a more active role in the referendum campaign, because only town voters were going to the polls.

“This wasn’t a village movement,” he said.

When the votes were counted from the April 7 referendum, about 37 percent of the town’s 802 registered voters had turned out at the polls.

Curt Witynski, deputy director of the League of Wisconsin Municipalities, said state laws are aimed primarily at ensuring that local government officials spend public funds only to educate voters — not to influence them. Those same officials, however, can spend their own money and their own time advocating for referendums, he said.

A town board or village board also can pass a resolution urging support for a measure like the Bloomfield boundary deal, Witynski said.

As long as no public money is being spent on advocacy, he said, elected representatives are free to urge support for such proposals.

“I think an individual member could do that,” he said. “A lot can be accomplished that way.”

East Troy firefighter Karl Sawyer has been charged with felony possession of improvised explosives — and resigned from the fire department — after an incident in which he allegedly tried to use his position to avoid charges in a drunken incident with a homemade bomb.

City of Lake Geneva installs new downtown parking system that replaces numbered parking stalls with vehicle license plates — and that allows motorists to feed the meter with a cellphone app.

WILLIAMS BAY — The fatal shooting of a Williams Bay resident May 18 in his home has been ruled a suicide.

Town of Bloomfield residents William Wieczorek, left, and his wife, Judith Wieczorek, center, listen as Town Chairman Dan Schoonover uses a display board Feb. 13 to explain a proposed boundary deal with the village of Bloomfield.

Yard signs were plentiful in the Big Foot School District in 2018 when referendum supporters raised private money in a successful push for a $9 million school district initiative.