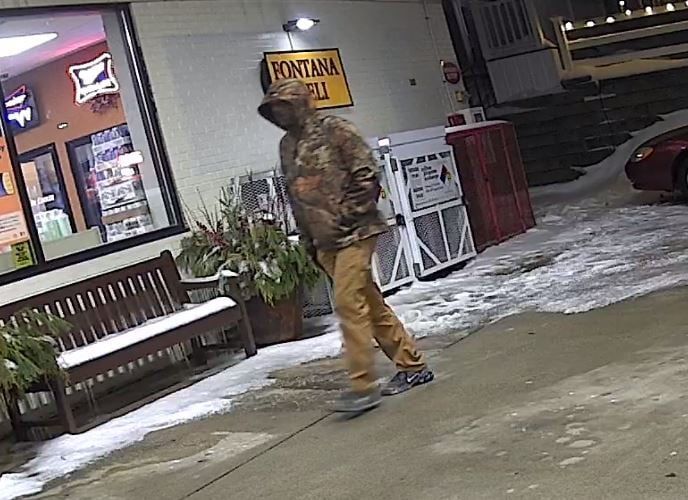 The Fontana Police Department has released pictures of a man they believe to be responsible for an armed robbery which occurred at the Fontana Mart gas station on Jan. 8. 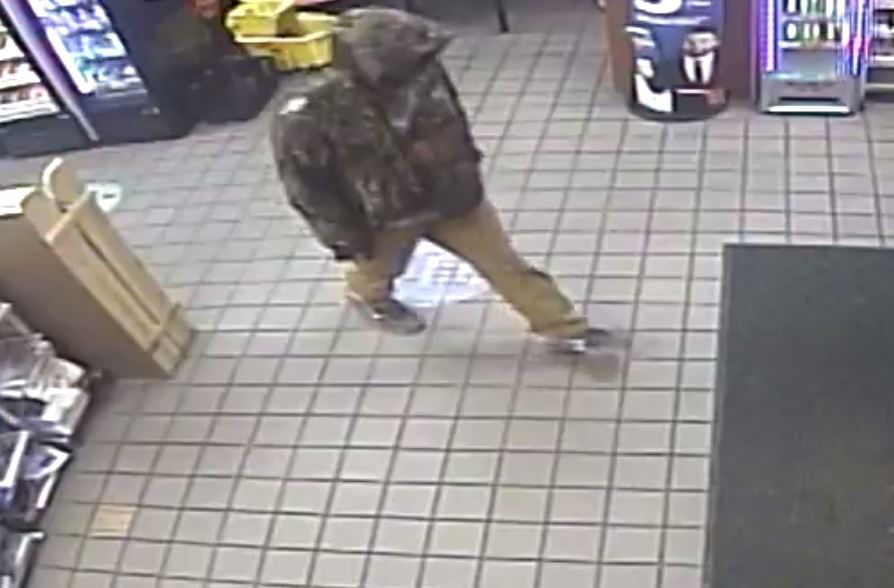 Fontana police are asking the public for information relating to the suspect of an armed robbery, who has been pictured wearing a camouflaged jacket and face mask at 6:30 p.m. Jan. 8 at the Fontana Mart gas station at 286 Valley View Drive.

FONTANA — The manager of the Fontana Mart gas station, which was robbed at gun-point on Jan. 8, says such a crime happening in the generally peaceful village was shocking.

According to station manager Prabh Thind, a man wearing a camo jacket and facemask walked into the gas station at 286 Valley View Drive around 6:30 p.m. on Jan. 8 before displaying a pistol and stealing between $300 and $400 from the clerk. Thind said the man placed a brown plastic bag on the counter and demanded the clerk fill it with money from the register.

The manager said when he came to the station after the clerk informed him of the robbery, Thind said while the clerk was thankfully unharmed, he was visibly shaken by the incident.

“He was shaking, he was all scared and shaking, it’s natural,” Thind said.

Thind said he could imagine armed robberies occurring in busier areas with larger populations but that he never imagined a robbery would occur in Fontana.

He said most of his customers are regulars who live in the area and that most strangers are visitors staying at the Abbey Resort, which is kitty-corner from the gas station.

Thind said he has submitted an insurance claim to recoup the stolen funds. As of Jan. 14, he said he has not received any updates from police regarding their investigation into the robbery.

Thind noted other crimes which have occurred in Fontana in recent months, including the theft of two cars and other items in Nov. 2020.

The Fontana Police Department posted several photos of the armed robbery suspect captured from the gas station’s security footage on social media and are asking members of the public for any information they might have about the individual.

Police describe the suspect as being between 30 to 40-years-old and having a “gruff” voice. No photos showing the man’s face were posted but police are seeking out members of the public who may have seen the suspect elsewhere the same evening and could provide additional information on the man.

Fontana police chief Justin Cates said as of Jan. 15, no one had been apprehended with connections to the crime but that investigators will be looking into several tips the police department received. He added that some of the tips came in as a result of the social media post the department made using photos of the robbery suspect.

“We do have some leads we are following up on that are pretty solid,” he said.

A Frank Lloyd Wright look-alike home along the northern edge Geneva Lake that once caught the eye of lake path walkers is now a pile of rubble.

Woman reportedly pushed out of moving car on Highway 11, charges filed against man

Man reportedly crashes into garage door, pushes woman out of moving car and sends police on a chase.

LAKE GENEVA — Police find 115.2 grams of marijuana inside the trunk of a car after performing a traffic stop near Cook Street at the corner of…

The Fontana Police Department has released pictures of a man they believe to be responsible for an armed robbery which occurred at the Fontana Mart gas station on Jan. 8.

Fontana police are asking the public for information relating to the suspect of an armed robbery, who has been pictured wearing a camouflaged jacket and face mask at 6:30 p.m. Jan. 8 at the Fontana Mart gas station at 286 Valley View Drive.