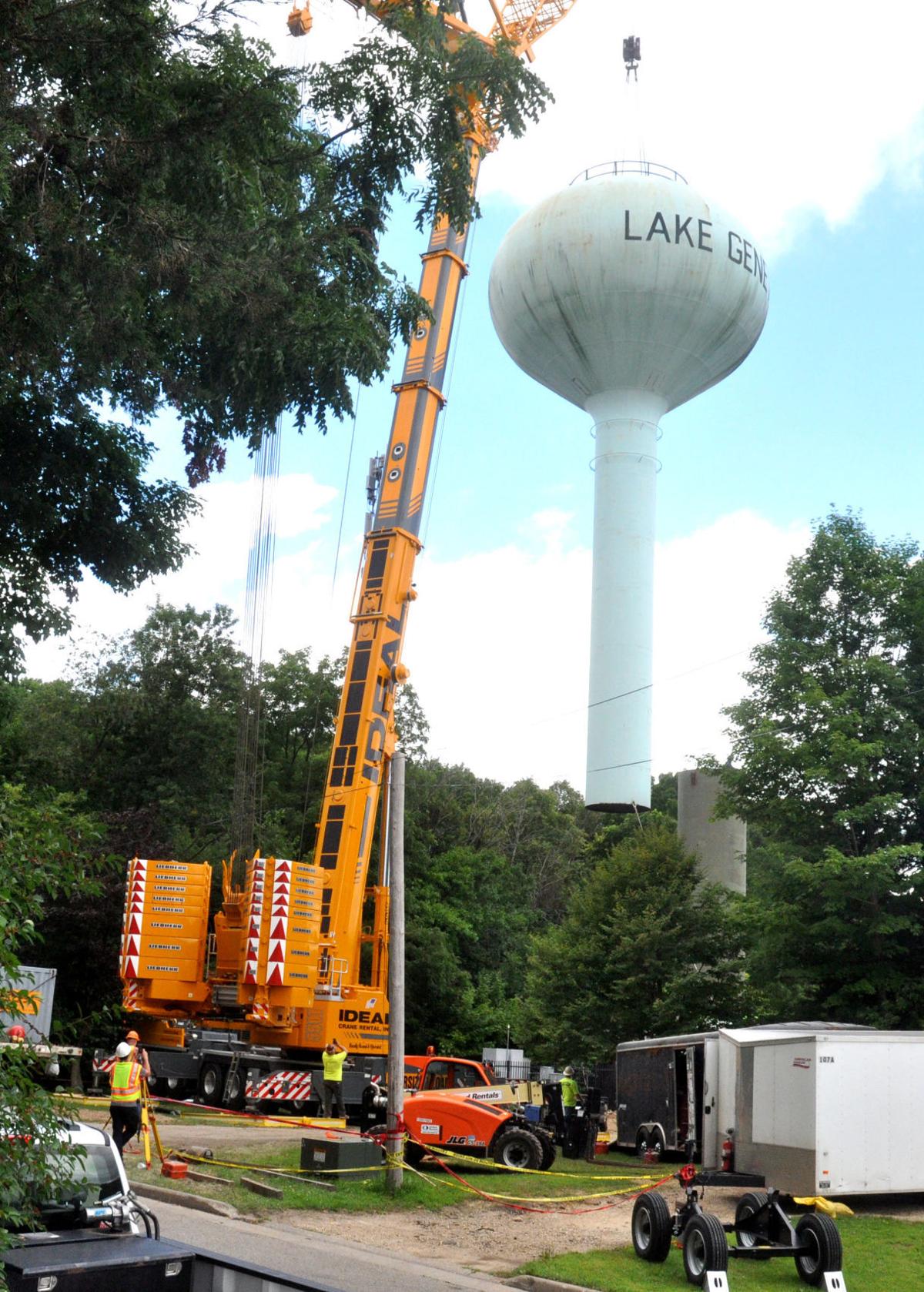 Lake Geneva city crews and contractors hoist the Dodge Street water tower from its base July 23 to add a 30-foot extension designed to increase water pressure for customers in the area. 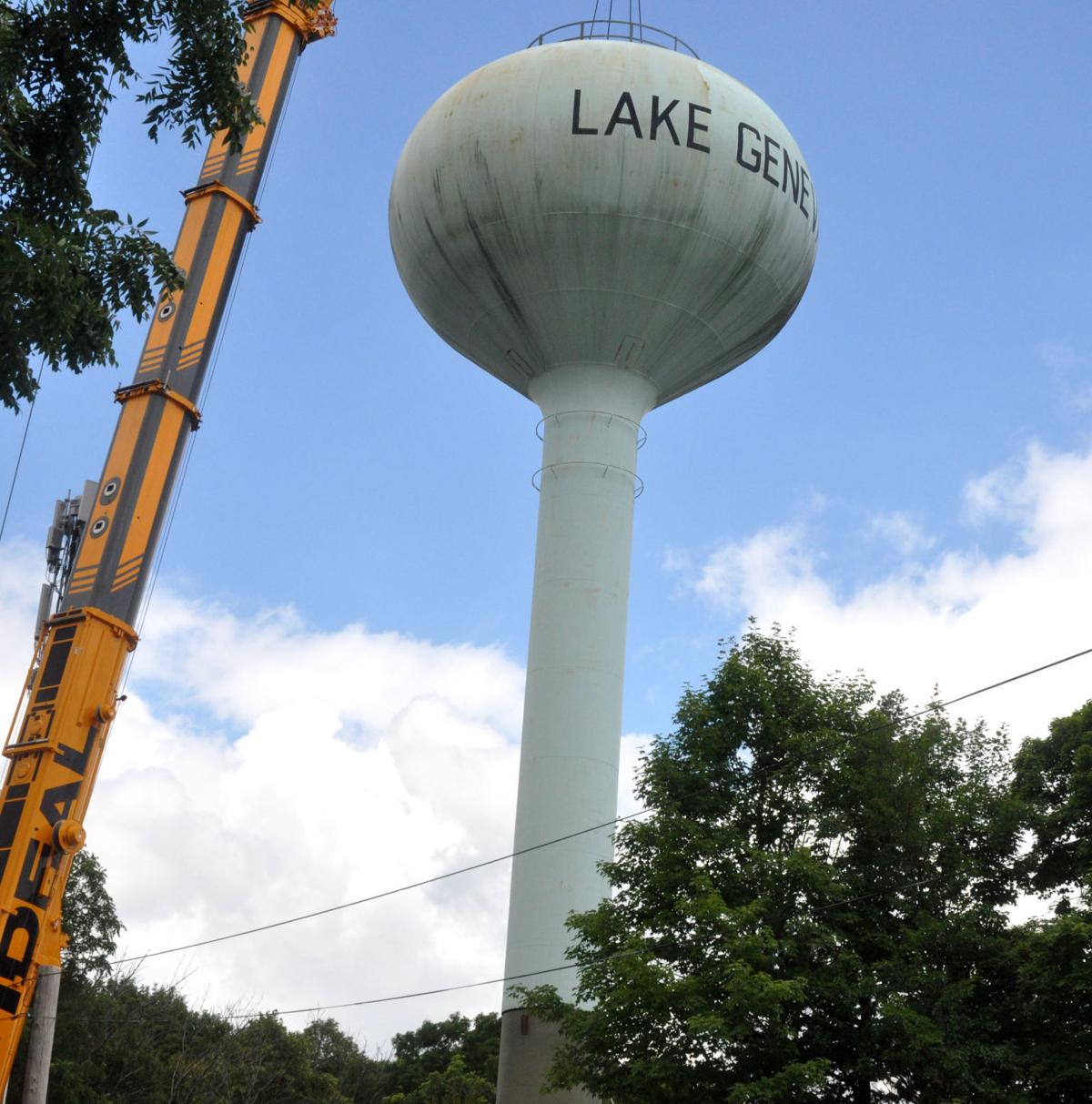 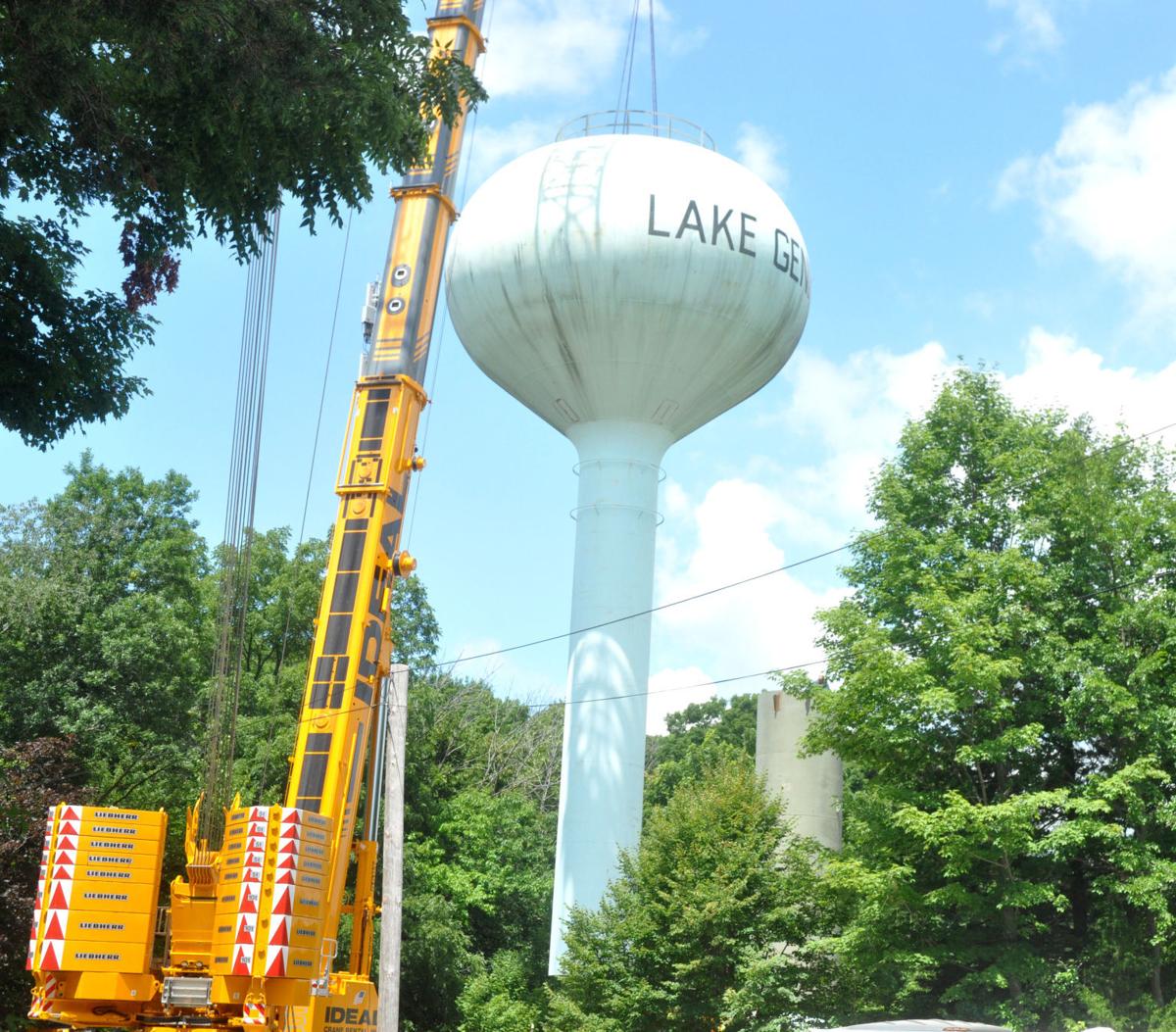 The water tower on Dodge Street is in the process of being added to a new 30-foot extension.

A Lake Geneva water tower is even more visible now that it extends 30 feet higher following an unusual operation to expand it.

The water tower near Dodge Street was extended July 23, raising the height from 105 feet to 135 feet, to create more water pressure for homes served by the tower.

The process involved hoisting the water tower into the air using a giant crane, then lowering it back down on top of a 30-foot extension, and welding the two parts together.

City utility commission director Josh Gajewski said it is not often that such a project is attempted — maybe a half-dozen times across the country.

“It’s not completely unusual,” Gajewski said. “But it’s not super routine, either.”

Neighbor Eddie Miller, who lives across the street, came outside to watch the unusual construction effort.

“It was quite the job,” Miller said. “It was awesome to see it happen.”

The water tower holds about 200,000 gallons of water, and will continue to operate at that capacity.

The purpose of making the tower 30 feet taller is to improve water pressure in a distribution zone that includes areas north of Main Street, and between Forest Street and Elmwood Avenue.

“I believe it to be instrumental in future growth of the city,” Earle said.

The project, which cost $364,260, was completed by general contractor Pittsburg Tank & Tower Co. Inc. of Henderson, Kentucky, along with design engineer MSA Professional Services of Baraboo.

“We got a lot of people involved,” Gajewski said.

Once the extension was in place and the water tower returned to its new base, crews planned to weld the structure together, then sandblast, recoat and repaint the water tower.

Work was expected to continue until fall.

Gajewski said neighbors in the area have been understand and cooperative throughout the project.

“They have been flexible and understanding with what’s going on here,” he said.

City officials have been planning the water tower extension since 2018.

Miller said he was not aware the unusual project was coming to the neighborhood until he stepped out of his house and saw the road blocked off and equipment in place.

Miller said he had not experienced any disruption in water service, so he assumed work was moving along smoothly.

“Everything is working,” he said. “I think they did a good job.”

Gene Haseley steps off curb to greet his birthday parade

Gene Haseley gets 120 birthday cards for his 90th birthday

Gene Haseley in front of yard sign outside his home

On Jan. 4 at approximately 9:50 p.m., officers were dispatched to the Chateau Royale Motel, 135 W Main St., for a report of two people unconscious in a bathtub in the motel.

Geneva Lake water ski show proposed along with other ideas

Lake Geneva city crews and contractors hoist the Dodge Street water tower from its base July 23 to add a 30-foot extension designed to increase water pressure for customers in the area.

The water tower on Dodge Street is in the process of being added to a new 30-foot extension.