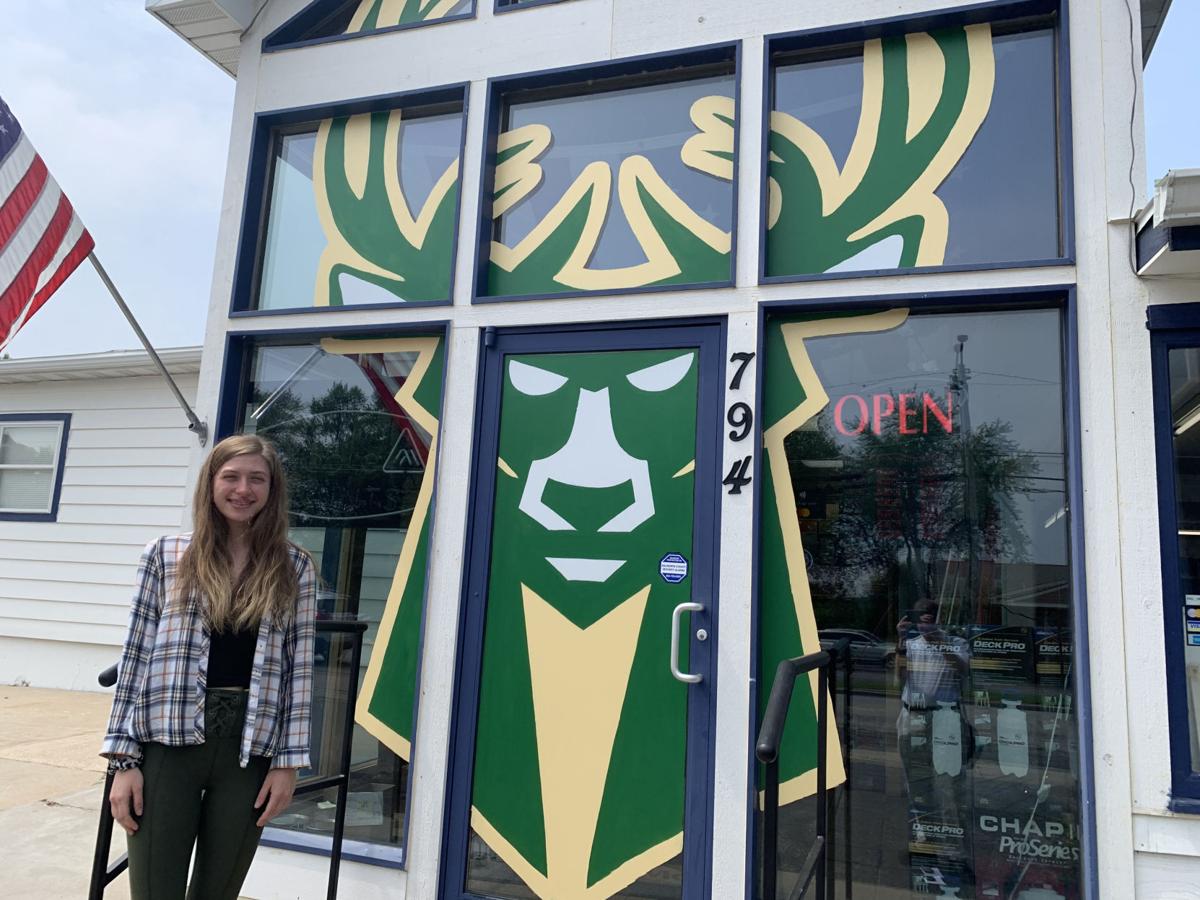 Tara Laine, employee at Geneva Paint & Decorating, recently painted a Milwaukee Bucks logo on the business’s front glass door to honor the team making it to the NBA finals and eventually winning the 2021 NBA championship after a 50-year drought. 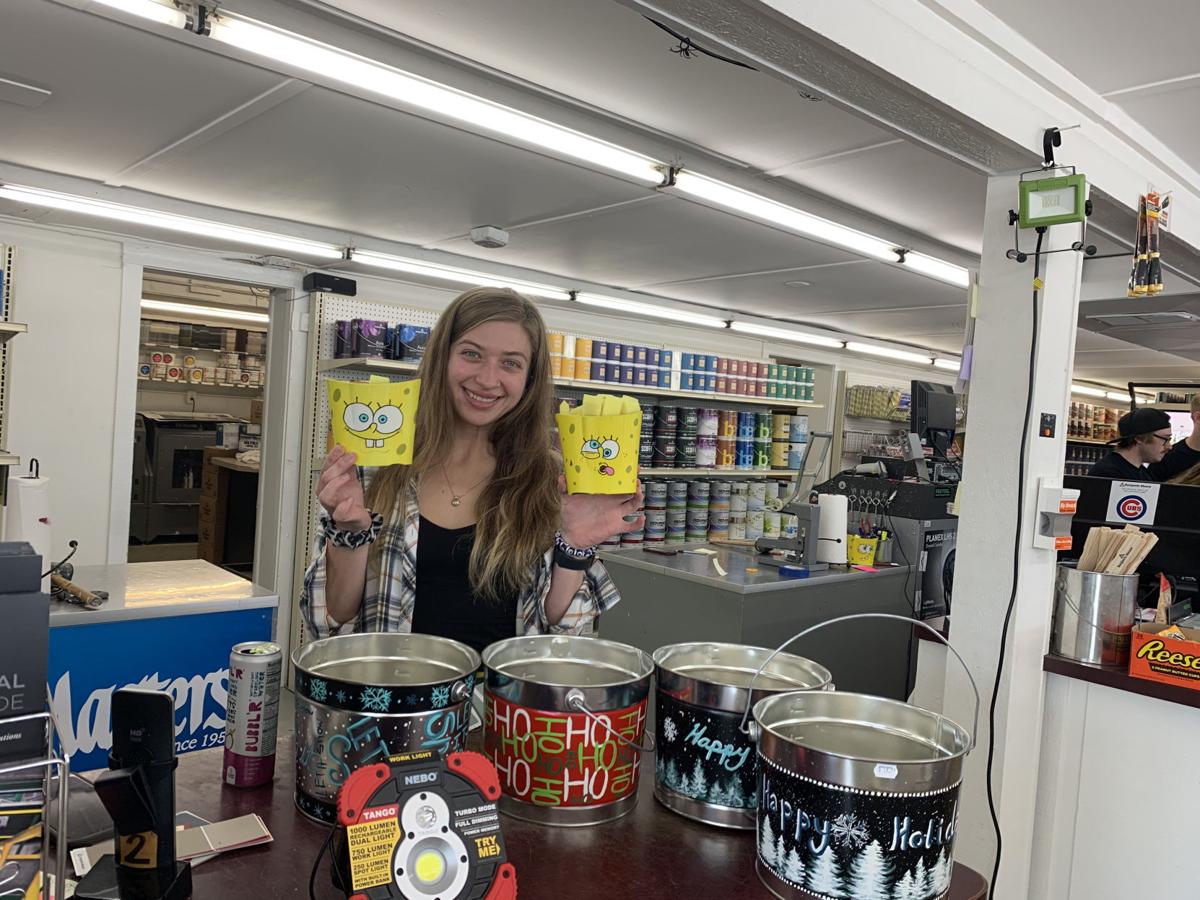 Besides window paintings, Tara Laine also has painted designs and logos on buckets and containers.

A Lake Geneva business is able to display its Milwaukee Bucks pride thanks to one of its employees.

Tara Laine, employee at Geneva Paint & Decorating, 794 Wells St., recently painted a Milwaukee Bucks logo on the front glass door of the business to honor the team making it to the NBA finals and eventually winning their first NBA championship in 50 years by defeating the Phoenix Suns, July 20.

Laine said a representative of the business suggested the idea for the Milwaukee Bucks logo window painting.

“I was like, ‘The front would be perfect,’” Laine said. “It has the perfect windows.”

Laine said it took her about 10 hours to complete the logo, using only about a pint of paint.

After the Bucks won the championship, Laine added the words “2021 champs” near the logo.

“The outline took about three hours and filling it in took about seven hours, then the rest was little touch ups,” Laine said. “The green paint I used and the tan paint were about half full when I was done. Surprisingly, I thought it would be a lot more paint.”

Laine said she received a lot of support from customers while she was working on the painting.

Laine said even though she enjoyed working on the project, there were some challenges with the weather.

“It was a little nerve wracking being of top of the ladder, because it was windy one day, and I was kind of swaying in the air,” she said.

Laine plans to keep the Bucks logo installed on the business’s door for at least another couple of weeks to continue to honor the team’s championship victory.

“My least favorite part is scrapping it off,” Laine said. “It’s still fresh. They just won, and I was thinking about painting a giant trophy, too.”

Laine has completed other window paintings for the Geneva Paint & Decorating store including a rose, cupid, Easter Bunny, coronavirus cell wearing a facemask, shamrock and leprechauns, as well as window paintings honoring holidays such as Fourth of July and Memorial Day.

She also recently completed a Fourth of July window painting for a gas station in Pell Lake.

“I’ve pretty much done every holiday,” she said.

Laine said she started doing window paintings for Geneva Paint & Decorating about a year ago.

“We just did it for fun, and I ended up being better than I thought at it,” Laine said. “I just kept going, and I got a lot better than when I first started.”

Besides windows, Laine also has painted designs on bowls, baskets and containers.

“I started out with the window painting because it seemed to be everyone’s favorite, but eventually I will branch off,” she said.

Laine said she has already received some interest from potential clients.

“For months people were asking me, ‘When are you going to start a business?,’” Laine said. “I haven’t gotten too many requests, but a lot of people have asked me for a business card. They’ve asked me what I can do and what I can’t do.”

Laine said it normally takes her between two to three hours to complete a window painting. She said the Milwaukee Bucks logo took longer than usual because of all the details that were involved.

“It goes by quick,” Laine said. “I look at the clock, and it’s been two hours. It’s literally an escape from reality in a way.”

Laine said she has been interested in artwork since her childhood. She said she took art classes while attending Badger High School, where she graduated in 2017.

“It was a favorite hobby that I had,” Laine said. “My grandmother was a painter, so whenever I would go over to her house she would have little boxes of art supplies.”

As for the Milwaukee Bucks, Laine said she is glad that they won the NBA championship.

“It was really exciting. I couldn’t believe it,” Laine said. “I was watching the game with my dad.”

'This is history': See all the memorable photos as fans erupt outside Fiserv Forum after Bucks win title

12 photos from Lake Geneva's Concert in the Park

The free Lake Geneva Concerts In The Park series kicked off Thursday, July 1, with Matt Meyer & the Smooth Riders performing from 6 to 8 p…

Tara Laine, employee at Geneva Paint & Decorating, recently painted a Milwaukee Bucks logo on the business’s front glass door to honor the team making it to the NBA finals and eventually winning the 2021 NBA championship after a 50-year drought.

Besides window paintings, Tara Laine also has painted designs and logos on buckets and containers.