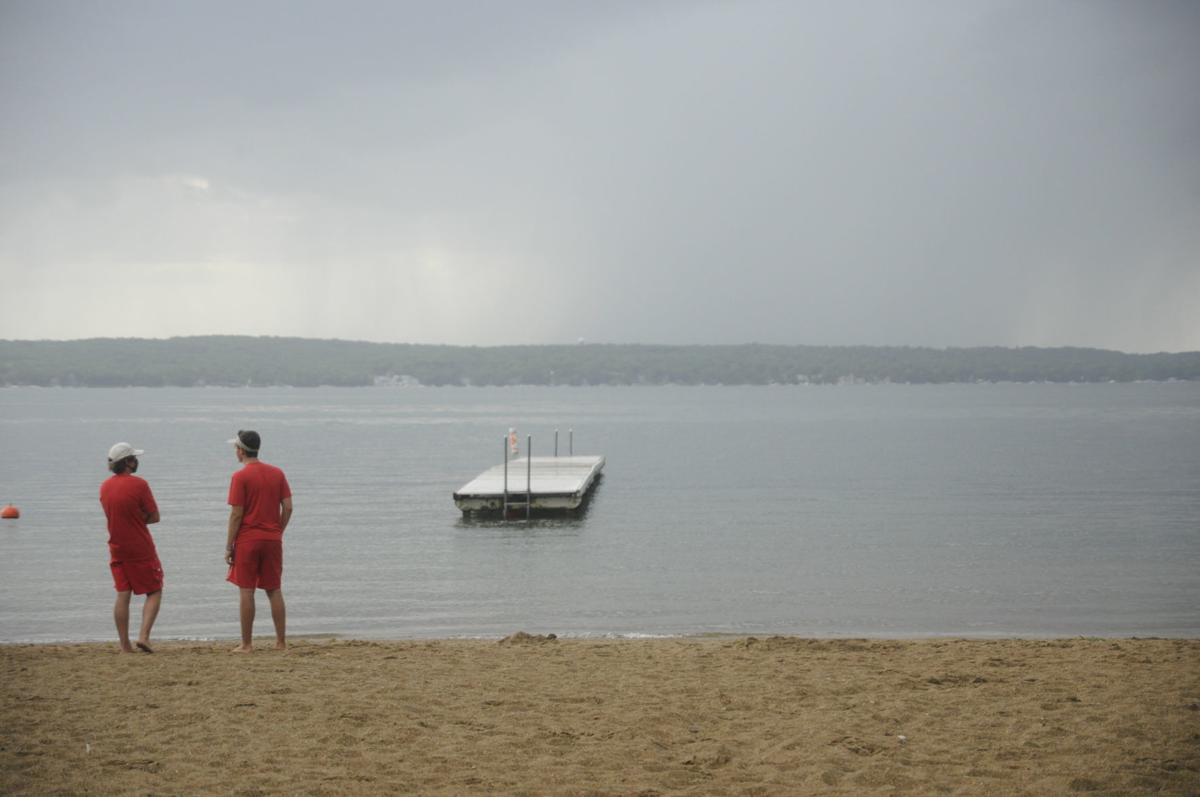 Two members of the Water Safety Patrol pause on the Williams Bay beach June 29 as clouds move in, discouraging crowds from gathering on the beach. 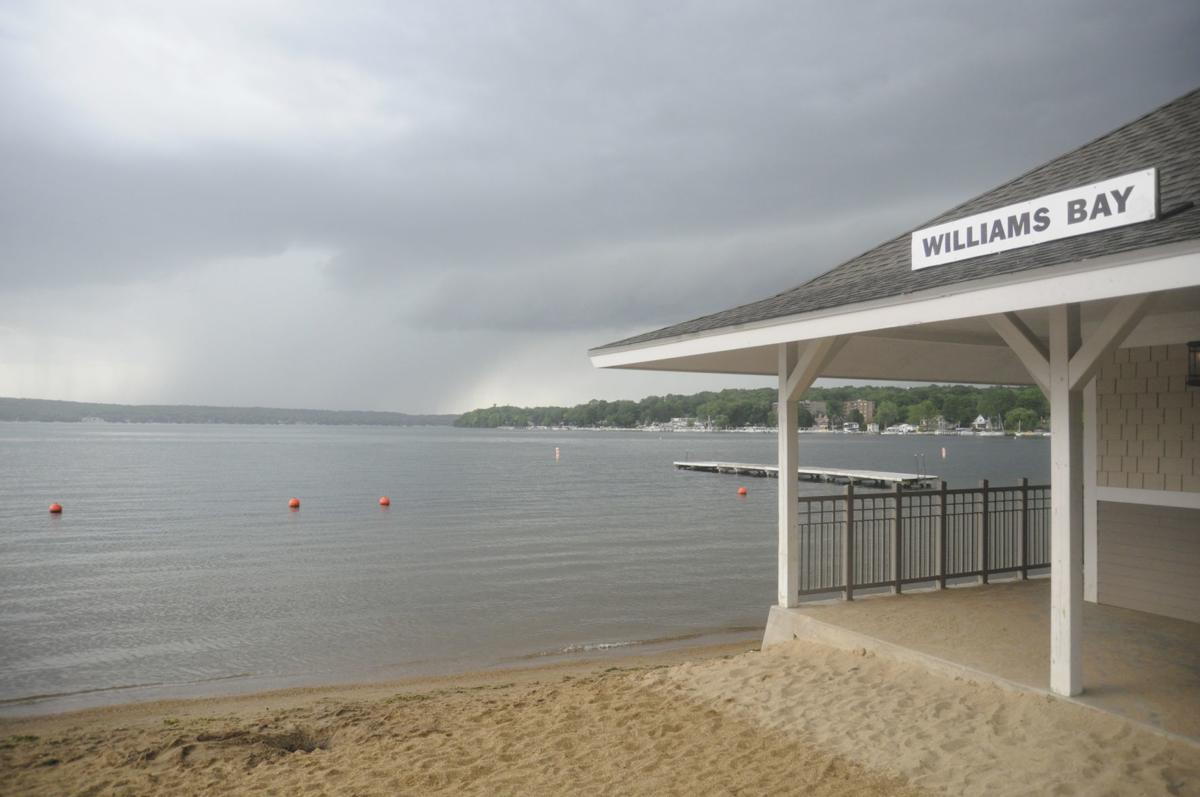 After initially capping beach capacity at 152 — 25 percent of the capacity — Williams Bay village officials now allow 304 people on the beach.

FONTANA – Fontana has tightened its beach restrictions while Williams Bay is easing its limits, as the two lakeside villages adjust policies to protect beach goers from coronavirus while still allowing outdoor summer fun.

Citing an increase in confirmed COVID-19 cases locally, Fontana has announced it is closing its public beach to nonresidents to limit traffic along the lakeshore.

Village trustees voted to close the beach during a June 23 special board meeting after multiple village beach workers tested positive for the coronavirus.

Village President Pat Kenny said the non-resident restriction was enacted to protect both members of the public and other village employees managing the beach, many of whom are in high school or college.

Although a firm date has not been confirmed, Kenny said the restriction may last between two or three weeks.

Kenny said he believes some recent coronavirus cases in the area may be the result of dense crowds on the beach and along the lakefront on recent weekends.

“It’s not surprising me that more of these cases are coming out,” he said. “I really think they’re coming out of Memorial Day weekend and all the crowds that showed up here.”

He said limiting the beach to residents and season beach pass holders should reduce congestion. In addition to increased social distancing, the beach restriction may also make parking more accessible for residents.

“I think by doing what we’re doing with the beach, I think we’re going to have a lot more parking available,” Kenny said.

The new rules bring Fontana’s policy more in line with that of Williams Bay, which restricted its beach access to non-residents earlier in the coronavirus pandemic.

Williams Bay originally capped its beach capacity at 25 percent, or 152 people, but has recently been moving toward more relaxed restrictions.

During a June 23 meeting, the Williams Bay village board voted to increase capacity on the beach to 50 percent, or 304 people, and to allow non-residents if their children attend the local school district or if they are taking swim lessons on the beach through the Water Safety Patrol.

Before the village board vote, trustees discussed beach restrictions during a parks and lakefront committee meeting.

At the committee meeting, trustee Jim D’Alessandro said he monitors the beach on busy days and has observed that it rarely reaches full capacity.

After speaking with beach attendants one day, D’Alesandro said he learned that they had turned away about 130 non-residents while only about 30 residents were using the beach.

Trustee Lowell Wright said he agrees that, after having the 25-percent capacity cap on the beach for more than a month, it may be time for the village to consider allowing more people on the beach.

Wright said he had not seen the beach so crowded that people were forced to be uncomfortably close.

“I think we could probably afford more than 150 people on the beach and still allow people room to be safe,” he said.

Trustee Jen McMannamy also voiced support to raise the beach capacity from 25 to 50 percent, before the committee unanimously approved a recommendation to the board.

An amendment was made to the recommendation to also allow non-resident students in the Williams Bay School District on the beach, after a member of the public said the village’s rule prevented classmates from spending time on the beach together.

The amendment was suggested by trustee George Vlach, who said the exclusion of Williams Bay students who are not village residents separates students at a time where they have already been separated from their classes, sports, events and other group school activities.

“I think it is important, more now than ever before, that we do what we can to help keep those kids together,” Vlach said.

+74 Photos: A look at how COVID-19 is affecting Wisconsin

John Hicks getting a meal

Video: Rescuers save deer from drowning in Geneva Lake

Watch the dramatic video of wildlife wardens and a bystander rescuing a deer from the waters of Geneva Lake in Williams Bay.

The National Weather Service has reported that a small tornado touched down Monday in Lake Geneva during an afternoon storm.

Among places flooded, besides roadways, was the ChocolateFest grounds.

Prosecutors have accused a man of burglarizing a Lake Geneva liquor store and stealing several bottles of vodka and 138 packs of cigarettes.

A woman throw overboard during a sailing race from Racine tells her harrowing story of fighting for survival in the dark waters of Lake Michigan.

A report from the Walworth County Courthouse on all the newest felony cases, including the potential prison terms facing each defendant.

It has been satisfying sweet tooths for 20 years, but the Jelly Belly candy operation in Kenosha County is being dismantled and moved out of state.

The latest police blotter from the Lake Geneva police department has all the latest city citations, including a flurry of people accused of not wearing seatbelts in cars.

Two members of the Water Safety Patrol pause on the Williams Bay beach June 29 as clouds move in, discouraging crowds from gathering on the beach.

After initially capping beach capacity at 152 — 25 percent of the capacity — Williams Bay village officials now allow 304 people on the beach.