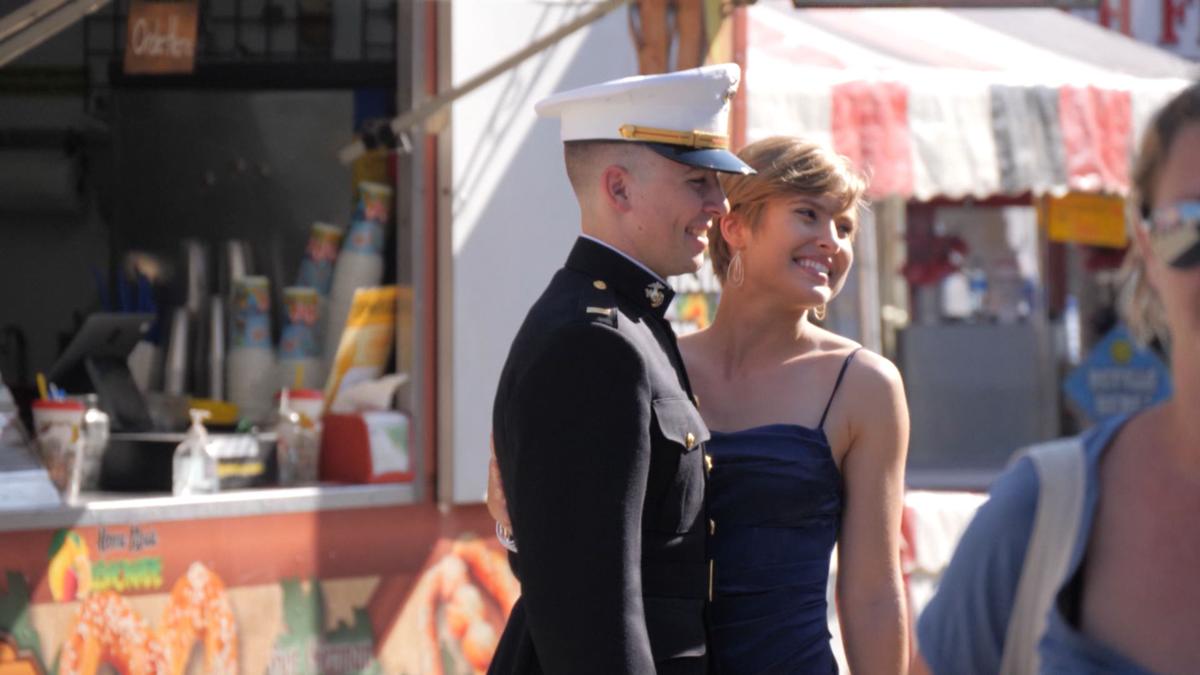 Max Gaffey and Iris Robare smile at the Walworth County Fairground where the two, who are both in the Marine Corp. got married. 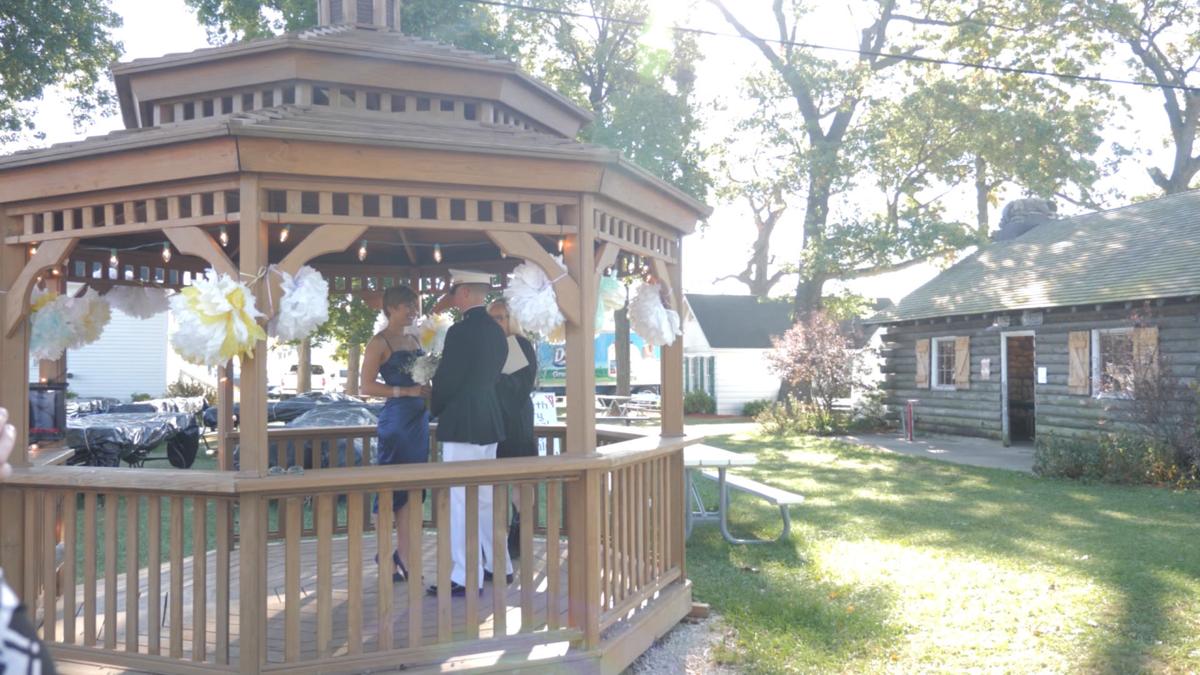 Max Gaffey and Iris Robare say their vows in a gazebo at the Walworth County Fairground where the two, who are both in the Marine Corp. got married. 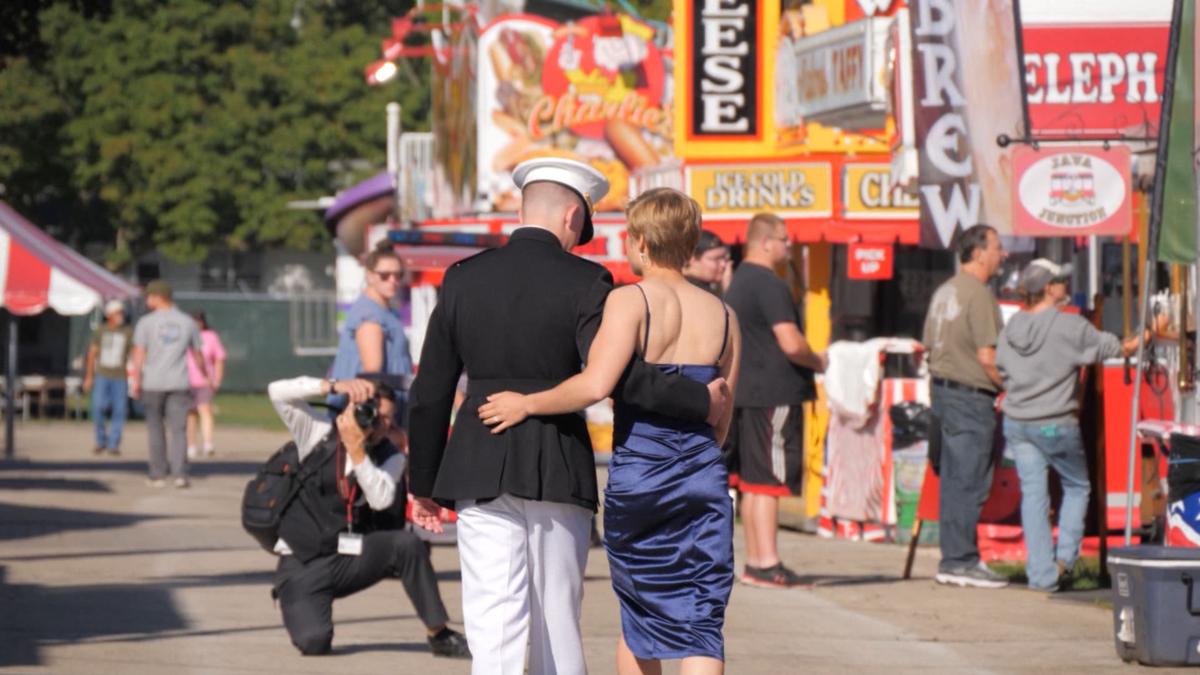 ELKHORN – After having to cancel the 2020 Walworth County Fair due to COVID, general manager Larry Gaffey said he was pleased with the attendance for this year’s county fair.

It’s a year that not only included all the festival favorites – and also included a wedding, Gaffey’s son and daughter-in-law in fact. (More on that later.)

Overall it was similar to 2019 numbers, except that it was down on Friday when it rained, Gaffey said.

Most importantly, Gaffey said he was grateful they were able to have the fair this year after having to cancel it in 2020. He said he was a little nervous they may forget a few things because they were out of practice after not having the fair in 2020, but he said he was very happy with how everything went, including the wedding for his son.

His son Lt. Max Gaffey and now daughter-in-law Lt. Iris Robare are both in the U.S. Marine Corp. and to be stationed together they decided to push up their wedding date to the fair weekend.

Gaffey’s son Max called up his dad on Thursday – the second day of the fair. He said he was going to get married that weekend. Larry said his initial reaction was, “You have to be kidding me.”

His next reaction was: “Well, why not? Do it at the fair.”

Max Gaffey said initially he wasn’t thinking about the fairgrounds for the wedding. But his fiancée was on board for the plan.

“It grew into an amazing day,” Max Gaffey said. “It was the happiest day of my life. It was perfect.”

His dad was in “fairground manager mode” getting everything organized and “it all worked out.”

On Sunday morning, Sept. 5, in the midst of the biggest event of the year at the fairgrounds, the two said their vows in a gazebo by the historic log cabin. The reception followed under the sponsor tent by the grandstand that wasn’t being used at the time. A friend made prime rib for lunch and that was complimented by a spread consisting of corndogs, cheese curds, cheese fries, cream puffs, candy apples and cotton candy.

The bride and groom had a small cake and the guests had funnel cake for their dessert.

Also because the event was during the fair, they had access to a photographer, videographer, and used some of the flowers decorating the fairground to decorate their gazebo.

“It was stressful but also exhilarating,” Larry Gaffey said.

He was happy to be able to share the special occasion with his son and daughter-in-law.

“I’m proud of both of them. They are both dedicated to their country. They found each other and have that common bond. It’s wonderful,” Larry Gaffey said.

Now, a week after the fairgrounds biggest event of the year, he is breathing a sigh of relief after a week he describes as “certainly a marathon.”

In photos: A wedding at the Walworth County Fair complete with corn dogs and cheese curds

Walking through the fairgrounds

Historic cabin in the background

Max Gaffey and Iris Robare smile at the Walworth County Fairground where the two, who are both in the Marine Corp. got married.

Max Gaffey and Iris Robare say their vows in a gazebo at the Walworth County Fairground where the two, who are both in the Marine Corp. got married.