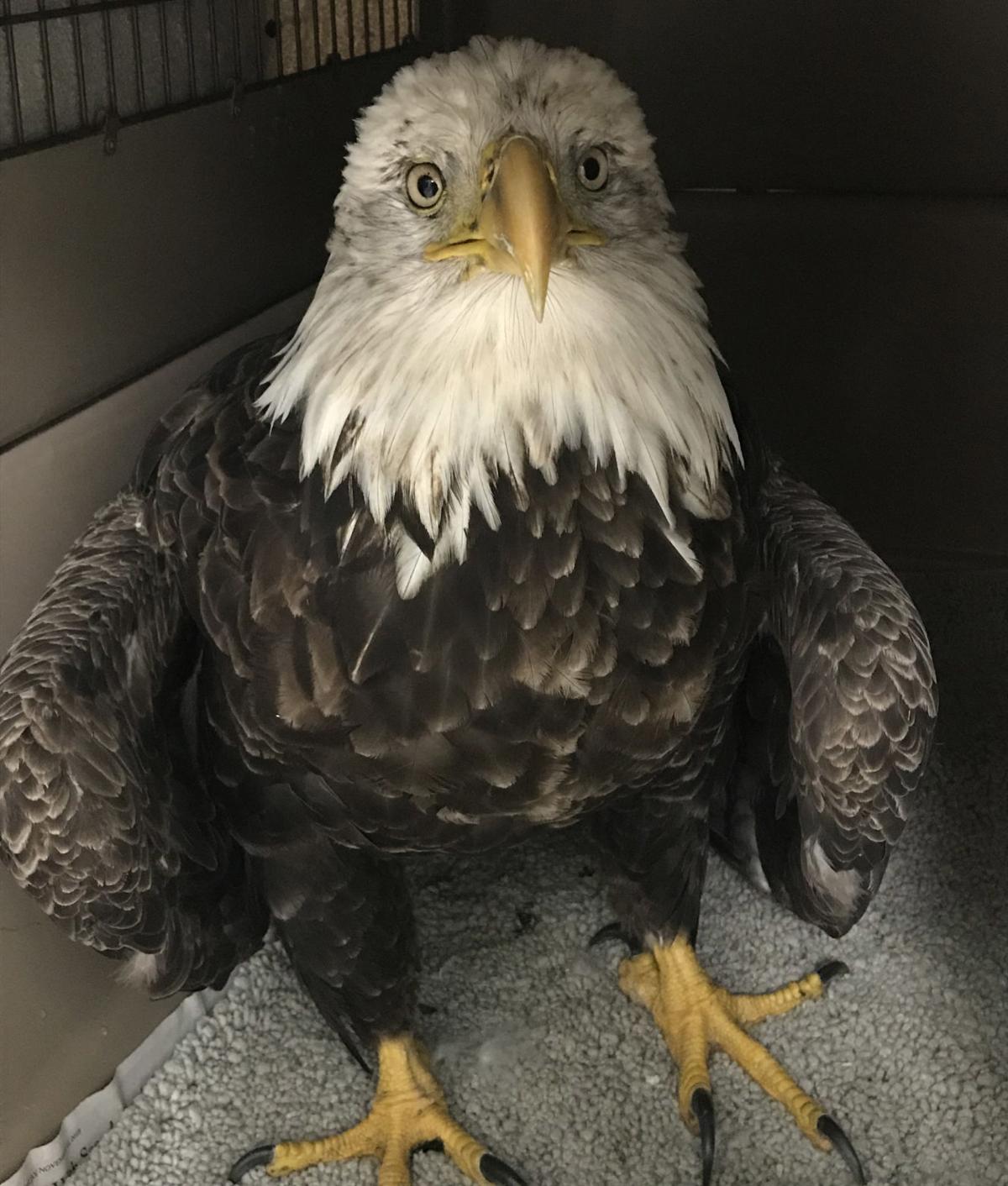 A male bald eagle, estimated to be about 5 years old, was cared for by Fellow Mortals Wildlife Hospital in the town of Geneva after it found injured Oct. 10. It was released back into the wild on Nov. 23. 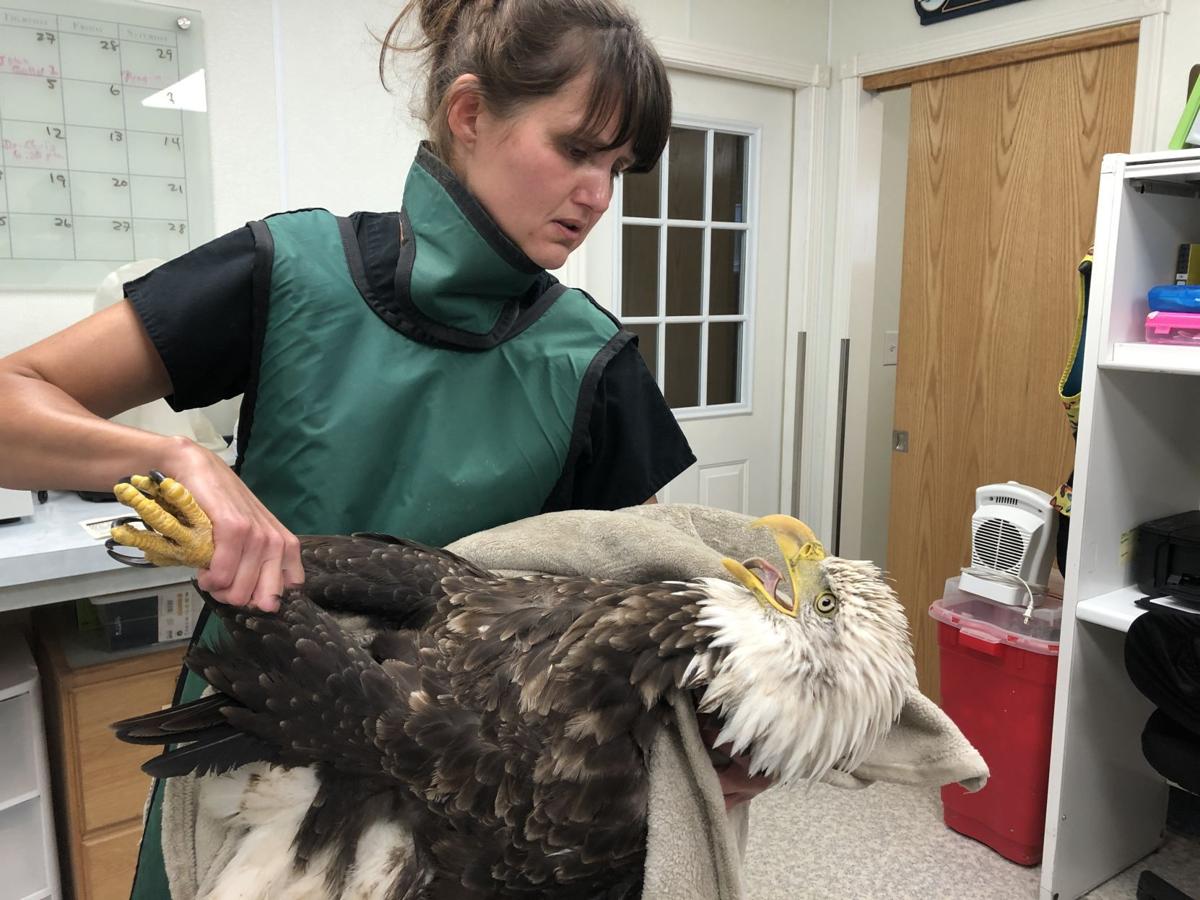 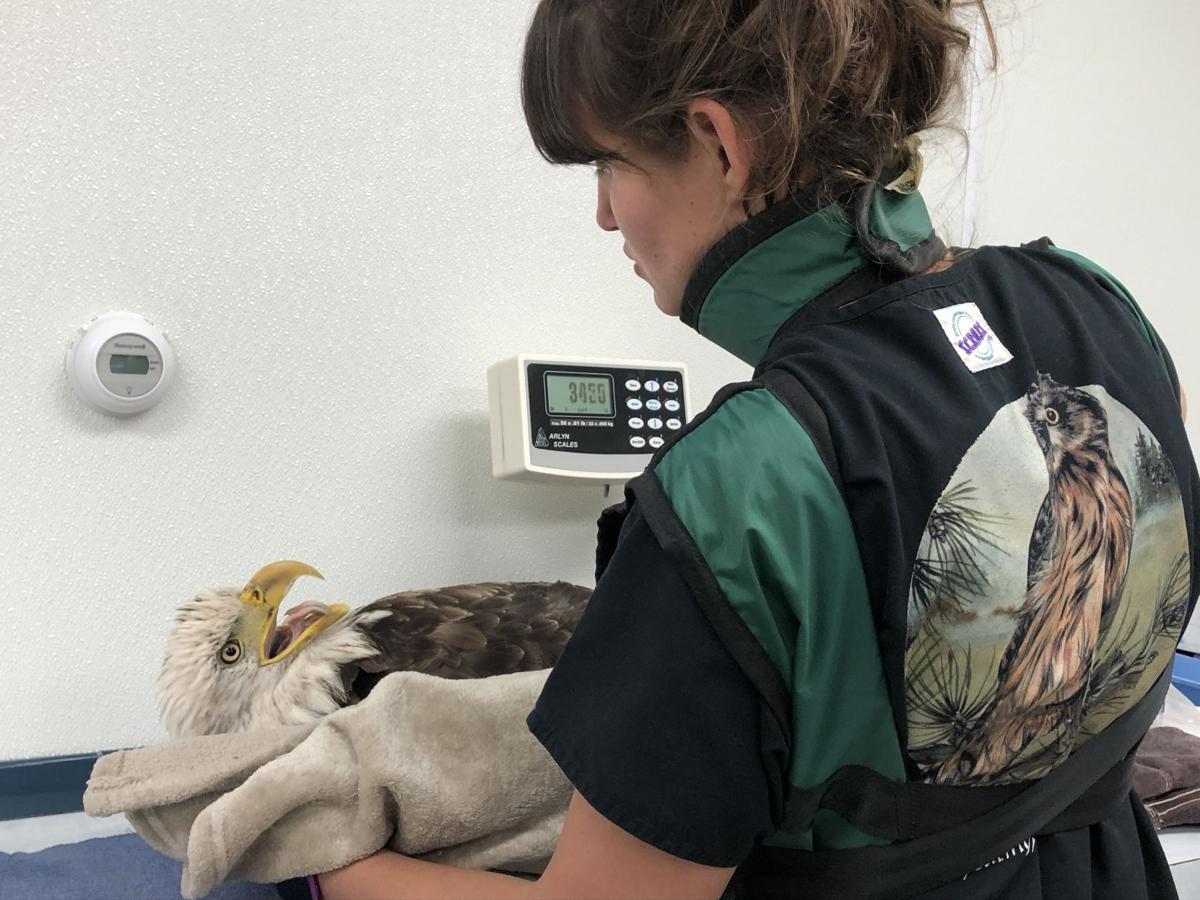 Jessica Massaro Nass, an advanced wildlife rehabilitator for Fellow Mortals Wildlife Hospital, weighs a bald eagle that was brought to the wildlife hospital after sustaining serious impact trauma, possibly from a car or boat.

Staff from Fellow Mortals Wildlife Hospital, a nonprofit which provides care to injured or orphaned wildlife, responded to calls about an injured bald eagle on the lawn of a Fontana resident on Oct. 10.

After bringing the bald eagle to its facility in the Town of Geneva, staff members found it had sustained no fractures after making x-ray images of the bird.

Despite not having fractured any bones, Yvonne Wallace Blane, the co-founder and director of rehabilitation for Fellow Mortals said the bald eagle had sustained serious impact trauma, which caused internal bleeding in the eagle’s lungs and may have potentially injured its organs.

“He had some kind of impact trauma, whether he was hit by a car or something happened on the water, we don’t know, but something caused a lot of injury to chest area or his back,” she said.

She added that it is unlikely the eagle was injured by another bird in a territorial dispute because there were no puncture injuries from talons.

She said the bald eagle, which she believes is male due to its smaller size compared to generally larger female bald eagles, has been stabilized and is being kept in a quiet, protected room.

Since the eagle has been taken to Fellow Mortals, it has begun drinking and eating, but Blane said it is too soon to say if the eagle will have a favorable outcome.

“It’s just going to be a matter of time to see if he can get through it,” she said.

Prior to the injury, Blane said the eagle, which staff are estimating to be five years old based on the coloration of its head feathers, was in a healthy weight and likely in good health.

“Whatever happened to him, he was in good health up until that point,” she said.

In a Facebook post made by Fellow Mortals providing details on the rescue, the nonprofit also asked for donations to assist with treatment. So far $680 has been contributed.

Blane said Fellow Mortals relies heavily on donations to provide care to injured wild animals and that like many other non-profits, the coronavirus has had a negative financial impact on the organization.

“Like everyone else, we’re struggling because of the pandemic,” she said.

Blane said she encourages those who support Fellow Mortal’s cause should consider attending its Wild Spirits Masquerade virtual event on Nov. 21, hosted from the Big Foot Country Club. The event will include displays from local artists, raffle items and discussions with Fellow Mortals staff members about their daily work.

The joy is in the details

Tools of the trade

Elves in the stump

Artist of the month

Geneva Lake drowning victim jumped in after child in water

A 31-year-old from Elgin, Illinois, was pulled from Geneva Lake on Monday, Aug. 2, after he went under water Sunday evening, trying to help a …

The Sunday evening drowning wasn’t the only water emergency on Geneva Lake that day. Earlier that same day, crews responded to another water i…

BLOOMFIELD — A man was arrested after allegedly dragging a woman down the road with his truck and punching another man in the face.

Racine man allegedly shot at multiple homes and cars, one of which had four children in it

MOUNT PLEASANT — A Racine man allegedly shot at multiple homes and cars, one of which had four children in it at the time.

July 27, 2021, Richard Driehaus would have turned 79. In his memory, his family held a legacy firework display over the weekend to give back to the community he loved.

The body of a 22-year-old man who slipped under water during a tubing accident has been pulled from Geneva Lake, confirmed Tom Hausner commander of the Geneva Lake Law Enforcement Agency.

Former Fleming's store to include hair salon and clothing store by the end of the summer.

Burlington man allegedly assaulted woman at playground, told her to 'go to Mexico'

BURLINGTON — A Burlington man allegedly assaulted a woman at a playground and told her to “go to Mexico.”

Racine resident faces several charges as a result of an accident that injured Walworth County deputy.

A male bald eagle, estimated to be about 5 years old, was cared for by Fellow Mortals Wildlife Hospital in the town of Geneva after it found injured Oct. 10. It was released back into the wild on Nov. 23.

Jessica Massaro Nass, an advanced wildlife rehabilitator for Fellow Mortals Wildlife Hospital, weighs a bald eagle that was brought to the wildlife hospital after sustaining serious impact trauma, possibly from a car or boat.