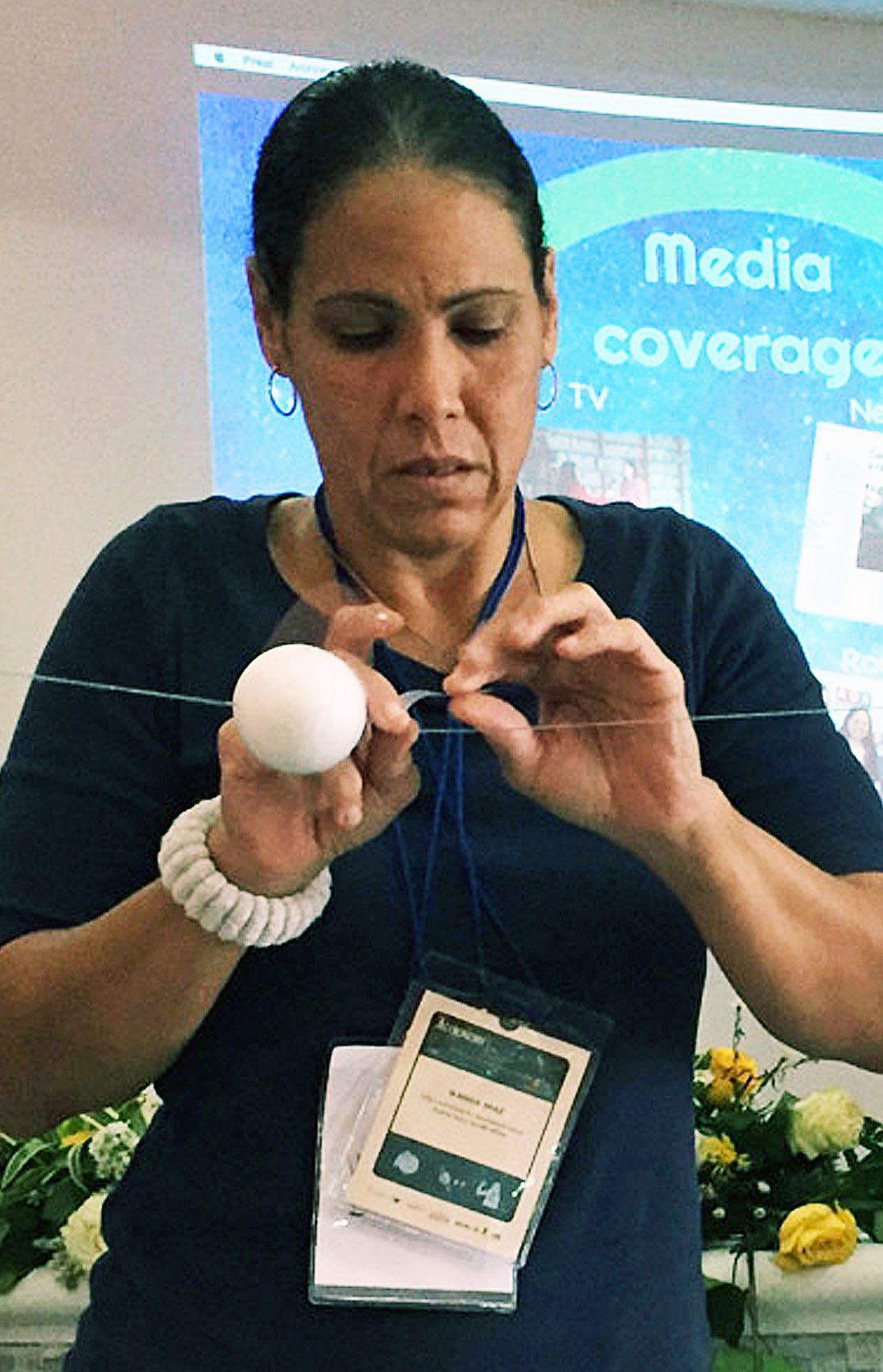 Astrophysicist Wanda Diaz Merced, who is blind, sets up a demonstration at a recent conference in Columbia. 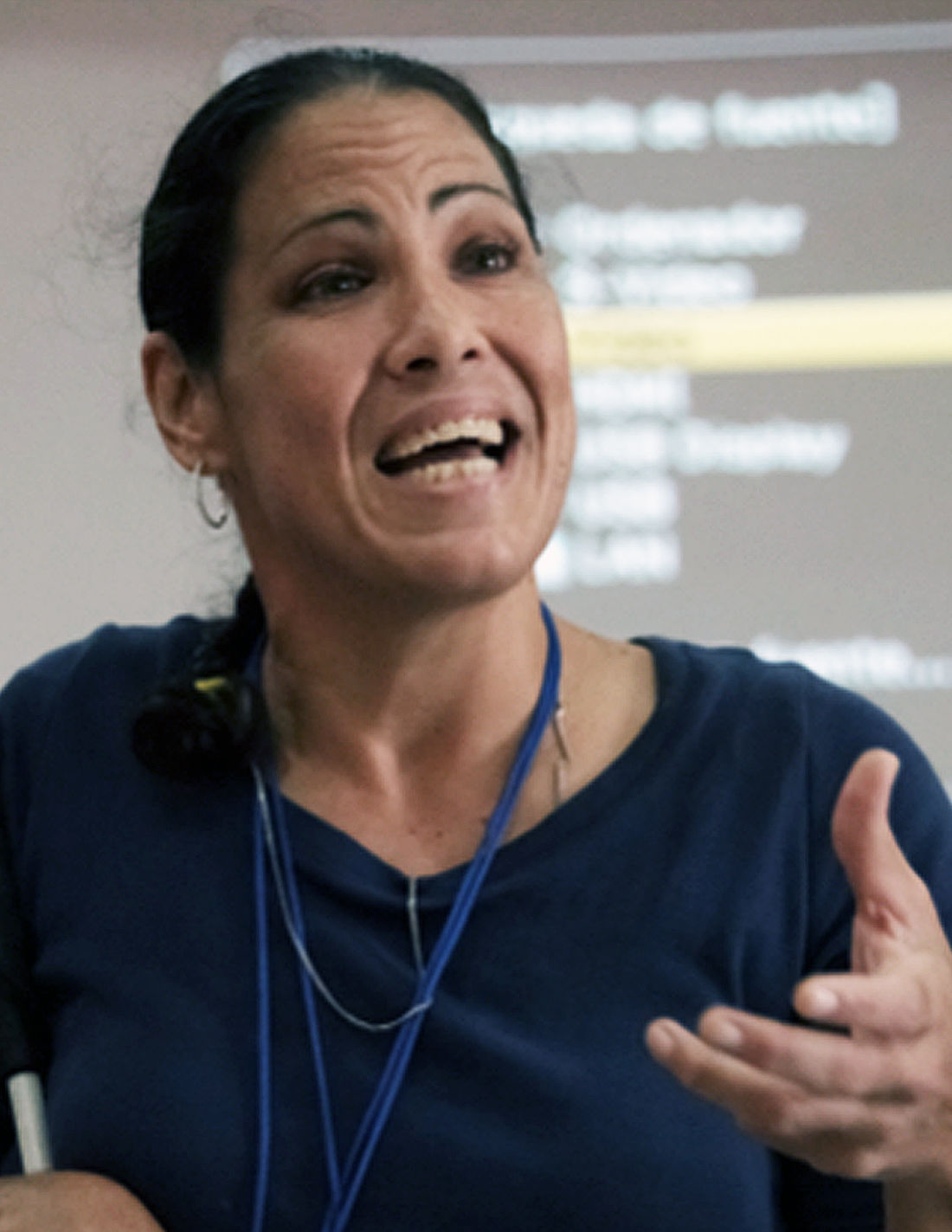 WILLIAMS BAY — Look up into a clear night sky and see the stars.

Wanda Diaz Merced can’t do that.

A serious illness deprived Merced of her sight in her early 20s.

Merced, a native of Gurabo, Puerto Rico, was studying astronomy when she lost her sight. Astronomy is a visually-oriented science, and it seemed that Merced would have to give up her dream of becoming an astronomer.

Except she didn’t give up her dream.

Merced earned a multidisciplinary PhD from the University of Glasgow, Scotland, where she researched using sound to analyze astrophysical data.

Class sounded like this, said Merced as she stabbed her finger into a desk top to sound like chalk writing on a chalkboard. A chalkboard Merced could not see.

Apparently there were some who didn’t believe that a blind person could become an astronomer, she said.

But Merced said she believes that science should be accessible to anyone.

“Science is about exploring,” said Merced. All humans need to explore, she added.

This past week, Merced was at Yerkes Observatory, participating in a program called IDATA, or Innovators Developing Accessible Tools for Astronomy.

During the week of April 17, Merced met with students from the Wisconsin School for the Visually Impaired, both at the school in Janesville and also at Yerkes. The students learned about astronomy and talked to Merced about their problems and frustrations in gathering useful astronomical data from the internet and other sources.

“We need honest, blunt data about what they want and need,” Merced said of visually impaired students.

“They run into road blocks constantly and they think this is normal.”

But it shouldn’t be normal for any scientist of any ability to have only limited access to data.

Actually, humans are blind to much of the light that comes from the universe. From infrared to ultraviolet, sighted eyes are sensitive to only a narrow band of light located almost in the middle of the spectrum, Merced said.

Merced is working on an entirely different way of interpreting the electromagnetic waves that pulse from stars and other distant astronomical objects.

Merced’s focus of astronomical study is the light emitted by gamma-ray bursts, the most energetic events in the universe.

She listens to them. The process is called sonification.

Data from solar dynamic objects are scanned through a computer program which turns them into sound.

“I bring all of those measurements to my computer, and I listen to them,” Merced said.

There is no standard for sonic data, Merced said.

Rising temperatures on a star might be represented by a quickening tempo or a rising pitch in a sound.

“If the number is big, the sound may be bigger (louder),” Merced said.

The advantage of sonification is that different sounds, tempos and pitches may be assigned to different kinds of data, allowing the user to experiment with the information to find relationships and variations that might not be apparent in data designed for the naked eye.

Kate Meredith, Yerkes director of education, said that Merced has already been credited with finding objects and astral motions using sonification that were not apparent with visual data alone.

“The sound is chaotic,” said Merced. “It is not necessarily harmonic.”

It takes some training to use sonic data.

Merced said she trains students in using the sonification by hiding information in manipulated data to familiarize students with sifting data from the sound stream.

“They get trained,” she said of the students. “It’s like a game. Sometimes they find new things, sometimes they don’t.”

While the parameters of sonic information are fluid, they are not open to wild interpretation.

“If I give you data from a quiet sun and you say there is a sunburst there, I say there is something wrong,” Merced said.

Merced is from Gurabo, Puerto Rico, but her work is international.

While she may not be well-known to the public, Merced is well-known within the scientific community.

In February 2016, she gave a 10-minute TED Talk. TED is a nonprofit devoted to ideas, which are usually expressed in brief, but high-powered oral presentations. Merced’s TED Talk can be found online at TED.com.

In October 2016 she was one of about 100 scientists invited to the White House Frontiers Conference.

She is co-chair of the National Society of Black Physicists’ multimodal accessibility project.

She is a member of The American Astronomical Society Working Group on Disability and Accessibility.

She is also coordinator for Astrosense, an international project that assists and encourages traditional and disabled learners in doing astronomical research.

She has taken a post doctoral position at the Office of Astronomy for Development in South Africa where she will work with students and teachers from the Athlone School for the Blind in South Africa to develop lessons that engage students in astronomy.

Merced was to be the project coordinator for the IDATA program, but her post-doctoral work in South Africa was delayed, limiting her availability for the Yerkes project.

She will be back at Yerkes on July 25 for about 10 days to continue her work with IDATA, Meredith said.

Astrophysicist Wanda Diaz Merced, who is blind, sets up a demonstration at a recent conference in Columbia.