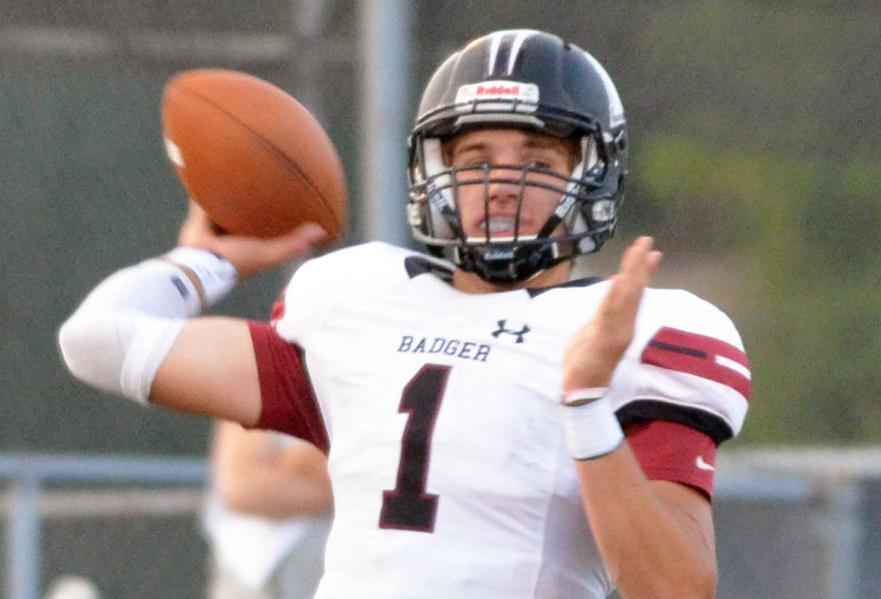 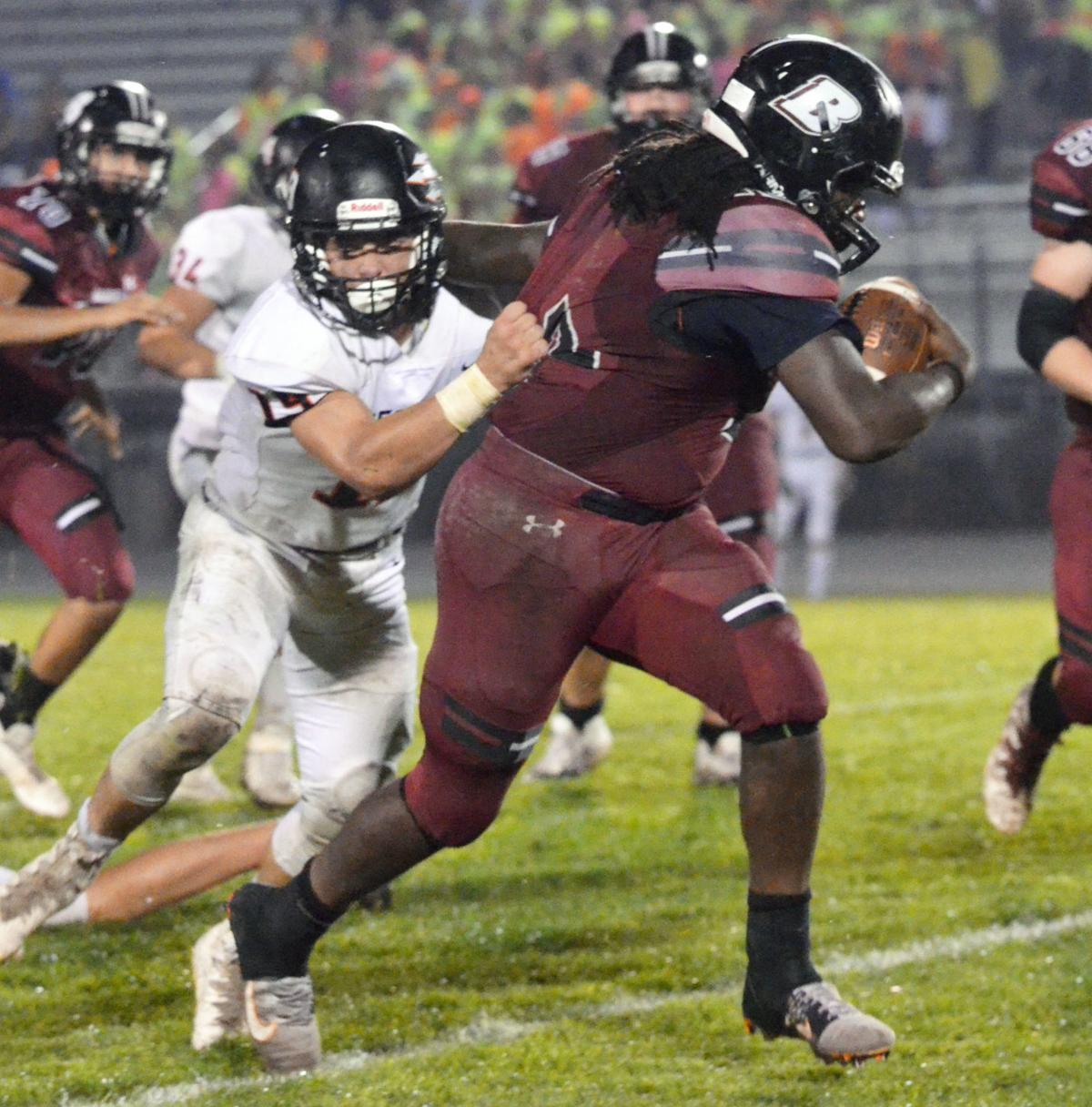 Running back Cole Gabor-Pullen fights through a tackle, as he adds a couple of extra yards to his team-leading 1,264 rushing yards this season.

Badger’s football team was seeking a bounce-back performance Sept. 27 when they traveled to Salem to face Westosha Central. After falling by three points to Burlington the week before, the Badgers exacted their revenge against Westosha in a 48-27 game that could have been more lopsided if mother nature did not get involved.

With weather reports predicting vicious storms to hit the area all night, the kickoff between the Falcons and Badgers was moved from 7 p.m. to 5:45 p.m. The time change did not allow the teams to avoid the storms, though, and with 11:30 remaining in the fourth quarter, the game went into a lightning delay.

Once the teams made it back to the locker rooms, it was clear to the officials, coaches and athletic directors that a delay of approximately two hours was imminent. Since the Badgers had outscored their opponents 41-14 in the past 24 minutes of game time, the teams instead decided to end the contest rather than hunker down for a late night.

Things did not always look so peachy for the Badgers, though.

The team got off to a slow start, and at the end of the first quarter, it looked like the Falcons might be able to pull off the upset, leading 13-7.

Slow starts have plagued the Badgers for the past two and a half seasons at this point, and head coach Matt Hensler is as desperate as ever to try to shake off that shortcoming.

“We have got to do something as a program to figure that out. It’s frustrating not to start strong, and it’s happened way too many times during the last couple of years,” Hensler said.

For as bad as the Badgers have been at the start of games, as they have in almost every game, they surged forward in the second quarter. After a pair of touchdown runs by quarterback Grant DuMez, Badger had a 21-13 lead.

Westosha Central was able to tie the game at 21 apiece, but Badger scored a touchdown late in the half to regain a 28-21 lead before the break.

Once play resumed in the second half, the Badgers kept rolling, scoring three straight touchdowns on the ground to extend their lead to 48-21. Westosha scored near the end of the quarter to cut it to 48-27 before mother nature ended the game for good.

DuMez had a well-rounded game under center for the Badgers, going 6-for-9 for 146 yards through the air and rushing for 120 yards and two touchdowns. In Badger’s triple-option offense, DuMez is instrumental in orchestrating the entire rushing attack, which totaled 371 yards to break 350 for the third-straight game.

Cole Gabor-Pullen led the team in rushing with 184 yards and two scores on the day, while Carter Lazzaroni rushed for two TDs of his own.

More important than the yards or the touchdowns was the fact that the Badgers did not fumble at all against the Falcons. Losing control of the ball has been a big issue for the team, even in games that it won, so Hensler was happy to see the team put forth a clean game.

“That’s a big deal. That was a pretty conscious effort by the kids and coaching staff this week to fix those things,” Hensler said.

Next up for the Badgers is a road trip to Union Grove on Oct. 4 to face the Broncos in a 7 p.m. kickoff.

The season has not quite gone according to plan for the Broncos so far, as they enter with a 1-5 record and an 0-4 Southern Lakes Conference record that has all but eliminated them from playoff contention.

Despite the fact that the game looks like a blowout on paper, Hensler has been coaching long enough to know that if the players go into the game expecting an easy win, an upset can come about quickly.

“We’ll do our part as coaches to make sure everybody understands what’s at stake, but it boils down to if the kids believe that and play hard. Our hope is they do,” Hensler said.

The Badger boys cross-country program has a new record holder after senior Demetrius Farmakis ran a time of 15:58 at the Southern Lakes Confer…

This season, the Badger girls cross-country squad is an interesting blend of veteran leadership and incoming talent.

AP Top 25 Takeaways: Superpowers looking not so super in 2021

On the court, the Big Foot volleyball team will look very similar this fall.

"We dictated the play": Badger soccer pulls together for 10-0 win

The Badger boys soccer team came out strong and stayed steady for a 10-0 win over visiting Racine Case on Thursday, Sept. 16.

The Badger girls tennis team may have a new head coach this fall, but that does not mean there’s an unfamiliar face in charge of one of Southe…

The Badger girls volleyball team’s 2020 roster was jam-packed with seniors, and that experienced lineup resulted in one of the program’s best …

The Badger boys soccer team suffered its first defeat of the season on Sept. 9, losing to Union Grove 1-0.

NFL Futures: Sleepers In the West

NFL Futures: Sleepers In the West

Running back Cole Gabor-Pullen fights through a tackle, as he adds a couple of extra yards to his team-leading 1,264 rushing yards this season.