Become a Member
Read Today's E-edition
Share This
AP Top 25 Reality Check: Georgia just 5th team to be No. 1 since 2015
Share this 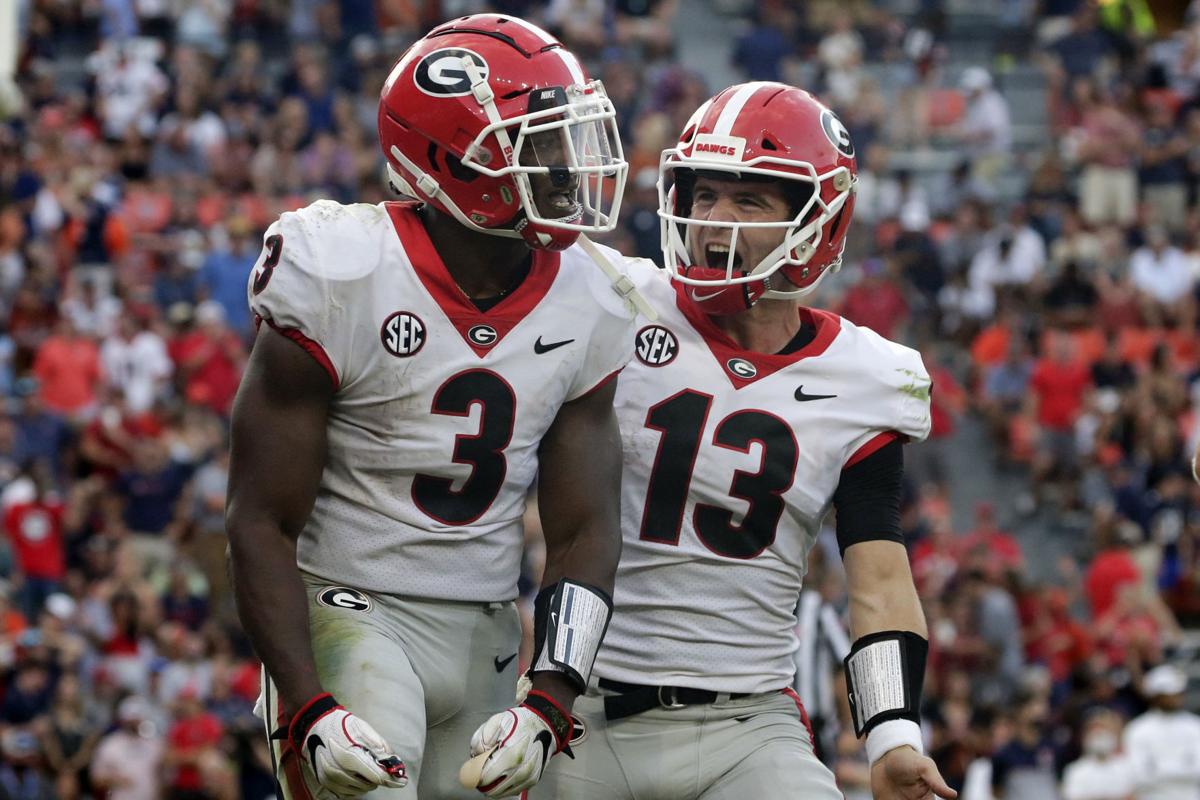 Georgia running back Zamir White (3) celebrates with quarterback Stetson Bennett (13) after scoring a touchdown against Auburn during the second half of an NCAA college football game Saturday, Oct 9, 2021 in Auburn, Al. (AP Photo/Butch Dill) 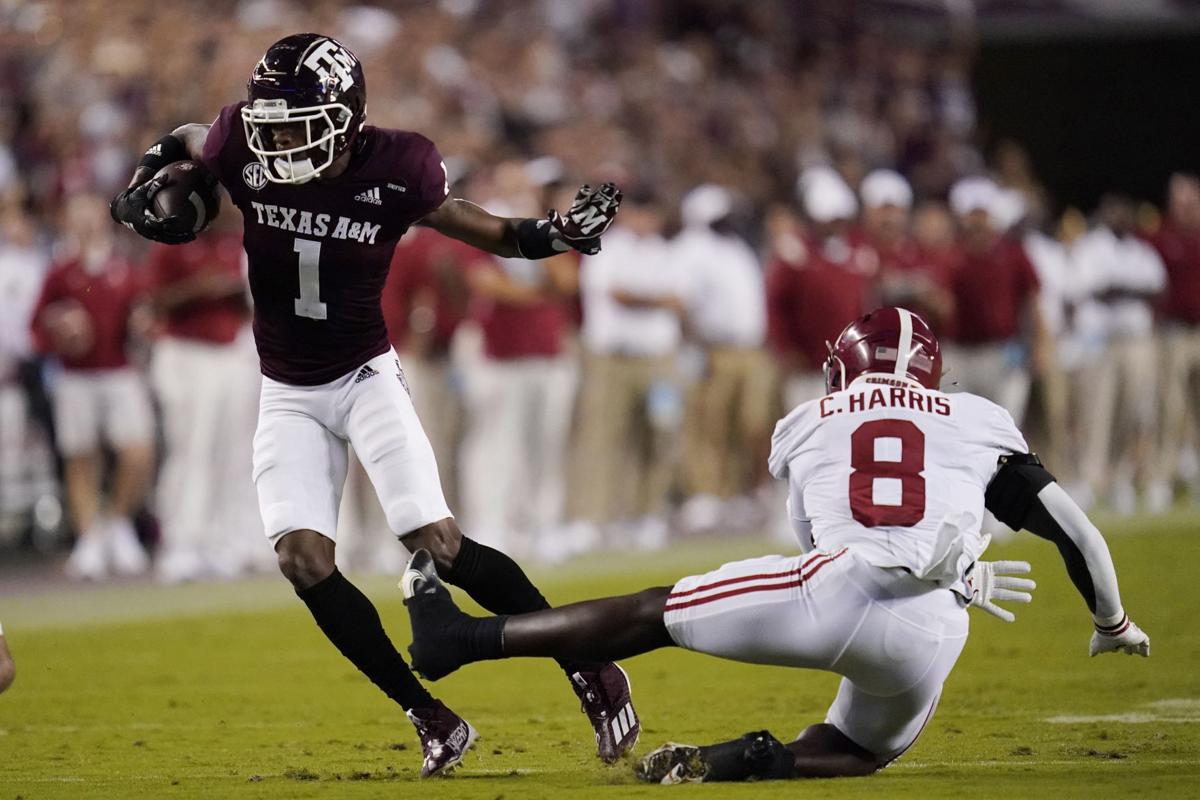 The No. 1 ranking in The Associated Press college football poll has been in the possession of just a few elite teams over the last six seasons.

Georgia joined that group Sunday, reaching the top spot in the AP poll presented by Regions Bank for the first time since being preseason No. 1 in 2008. It has been 39 years since the Bulldogs were No. 1 in a regular-season poll.

Georgia was one of four teams to be No. 1 in the 1982 season, holding that spot for the final five weeks of the regular season before losing to Penn State in a Sugar Bowl that decided the national championship.

The last time as many as four teams held No. 1 in a season was 2014, when defending national champion Florida State, Mississippi State and Alabama were atop the polls during before Ohio State won the College Football Playoff.

Since then no more than three teams have been No. 1 in any season.

The record for No. 1 teams in a season is seven in 1981. The were six No. 1 teams in 2008. As famously crazy as the 2007 season was, only four teams reached No. 1. There were nine different No. 2s that year, including California, South Florida, Boston College and Kansas. Yeah, it was weird.

This season has felt more unpredictable than recent ones, and Texas A&M's upset of preseason No. 1 Alabama on Saturday night was the peak. An unranked team had not beaten No. 1 since 2008, when Oregon State knocked off Southern California.

The Trojans dropped eight spots after that late September road loss. Alabama wasn't punished as much by the voters this week, falling only to No. 5.

Reality Check understands that historical greatness buys a program some credibility, but thinks the Tide might have been cut too much slack.

Reality check: Bulldogs D is racking up fun numbers. Like this from SportSource Analytics: Opponents have to run 10.27 plays for every point scored against Georgia. Next best in the nation is Clemson, which faces 5.97 plays per point allowed.

Next: vs. Purdue, Saturday.

Reality check: Hawkeyes are tied for fourth in the country in number of punts with 40. The other nine teams in the top 10 are a combined 12-45. Of course, Tory Taylor is a weapon, putting six of nine kicks inside the 20 against Penn State.

Ranked: The AP poll is a backward looking assessment of what a team has accomplished, not a forward looking projection, so this is fine.

Next: vs. UCF, Saturday.

Reality check: Having at least one of the SEC powerhouses lose a regular-season game was another item on the Bearcats' CFP checklist.

Next: vs. TCU, Saturday.

Reality check: Easy to get excited about QB Caleb Williams, especially if his mobility is part of what unlocked the Sooners' running game and RB Kennedy Brooks (217 yards on 25 carries) against Texas.

Next: at Mississippi State, Saturday.

Reality check: Four of Alabama's six national championships were won after losing a game in the regular season and it wouldn't be the least bit surprising if the Tide were to do that again.

Ranked: Little high. It's OK to make the Tide climb back after losing to an unranked team.

Reality check: In three previous games against Akron, Rutgers and Maryland, the Buckeyes allowed just six scoring drives among 36 total offensive possessions. Temper enthusiasm because of the the competition, but there are signs of progress for the defense.

Ranked: Buckeyes should probably still be behind Oregon.

Reality check: The loss to Iowa made a good case for QB Sean Clifford being the most important player in the country.

Reality check: Road wins against Wisconsin and Nebraska in consecutive weeks is a nice accomplishment, but this looks like a season that will be defined by what the Wolverines do against Michigan State, Penn State and Ohio State — as is so often the case.

Next: vs. California, Friday.

Next: at Indiana, Saturday.

Reality check: Explosive Spartans. Michigan State had more 60-plus yard plays against Rutgers (four) than the the program had in the past three seasons combined.

Reality check: Chris Rodriguez Jr. (128 yards per game and seven TDs) might be the best running back in the SEC and the Wildcats' Benny Snell 2.0.

Ranked: About right, though credit for beating LSU is waning fast.

Reality check: Back-to-back games on the road against Texas and Iowa State should answer the question, Are the Cowboys for real?

Next: at Tennessee, Saturday.

Reality check: Rebels have a Heisman contender quarterback in Matt Corral, but that running game ranks fifth in the country at 260 yards per game gets it contributions from a lot of different players and looks,

Reality check: The run games seems to work best with QB Tyler Buchner in the game so that's probably the best way forward. The Irish now have two weeks to get the freshman healthy and up to speed.

Ranked: Sure, this is fine.

Reality check: What if I told you the Demon Deacons have the best set of receivers in the ACC? Jaquarii Roberson (31 catches for 515 yards and two TDs) and A.T. Perry (23 for 454 and seven touchdowns) have got speed and size.

Ranked: Highest ranking since 2008 for Wake is about right.

Next: vs. Auburn, Saturday.

Next: at Utah, Saturday.

Reality check: Sun Devils are tied for the second-most rushing touchdowns in the country with 21.

Ranked: Should be behind BYU.

Next: at Baylor, Saturday.

Reality check: Cougars made all the mistakes they were mostly avoiding in their first loss of the season against Boise State.

Ranked: Should be ahead of Arizona State.

Next: at LSU, Saturday.

Reality check: Gators have outgained all their opponents. You are what you're record says you are, but Florida is probably better than that.

Next: at Missouri, Saturday.

Reality check: One question for the Aggies after the beat Alabama: Where has that been for five weeks?

Next: at Boston College, Saturday.

Reality check: Circle Oct. 30. The Mustangs play at Houston and the Cougars might be second best in the AAC.

Next: at San Jose State, Friday.

Reality check: Things are about to get real for the Aztecs in the Mountain West with a three-game stretch of at San Jose State, at Air Force and Fresno State.

Reality check: An epic Red River collapse, but a team that probably has enough firepower to get another shot at the Sooners in the Big 12 title game.

Ranked: Too high, though there are not other great options. Maybe Baylor or Auburn?

Unbeaten Texas-San Antonio is a popular pick among those who love to root for the underdogs.

Follow Ralph D. Russo at https://twitter.com/ralphDrussoAP and listen at http://www.westwoodonepodcasts.com/pods/ap-top-25-college-football-podcast/

Northwestern officials removed a Badgers fan from Welsh-Ryan Arena after he made racist and vulgar gestures during the game.

What we can learn from Wisconsin football's offensive coordinator job posting

The job listing to be the Badgers' offensive coordinator is light on details, but it does reveal some nuggets of information.

Longtime Badgers assistant coach Bob Bostad will lead the offensive line once again, a role he held from 2008-11.

Bobby Engram is the Badgers' target as offensive coordinator, according to two ESPN reporters.

The Badgers are adding a third experienced cornerback from the transfer portal, with former Kentucky starter Cedrick Dort Jr. set to join UW. Dort Jr. played in 44 games over five years with the Wildcats.

Mackenzie Long grew up in Walworth County and attended Big Foot High School where she played volleyball. She graduated in 2014 and went on to …

Jim Polzin: Big Ten fails to protect its integrity when given chance to police sportsmanship

Iowa’s Jordan Bohannon called out Wisconsin’s Brad Davison and Big Ten officials on Twitter. The conference offered no public response. Why that’s a failure for the conference.

Open Jim: Why the 2023 season could be a special one for the Wisconsin football program

Innovative insulation unveiled for Team USA ahead of Winter Olympics

NFL Divisional Round Preview: Expect a Dog Fight in Packers Vs. 49ers?

NFL Divisional Round Preview: Expect a Dog Fight in Packers Vs. 49ers?

Georgia running back Zamir White (3) celebrates with quarterback Stetson Bennett (13) after scoring a touchdown against Auburn during the second half of an NCAA college football game Saturday, Oct 9, 2021 in Auburn, Al. (AP Photo/Butch Dill)