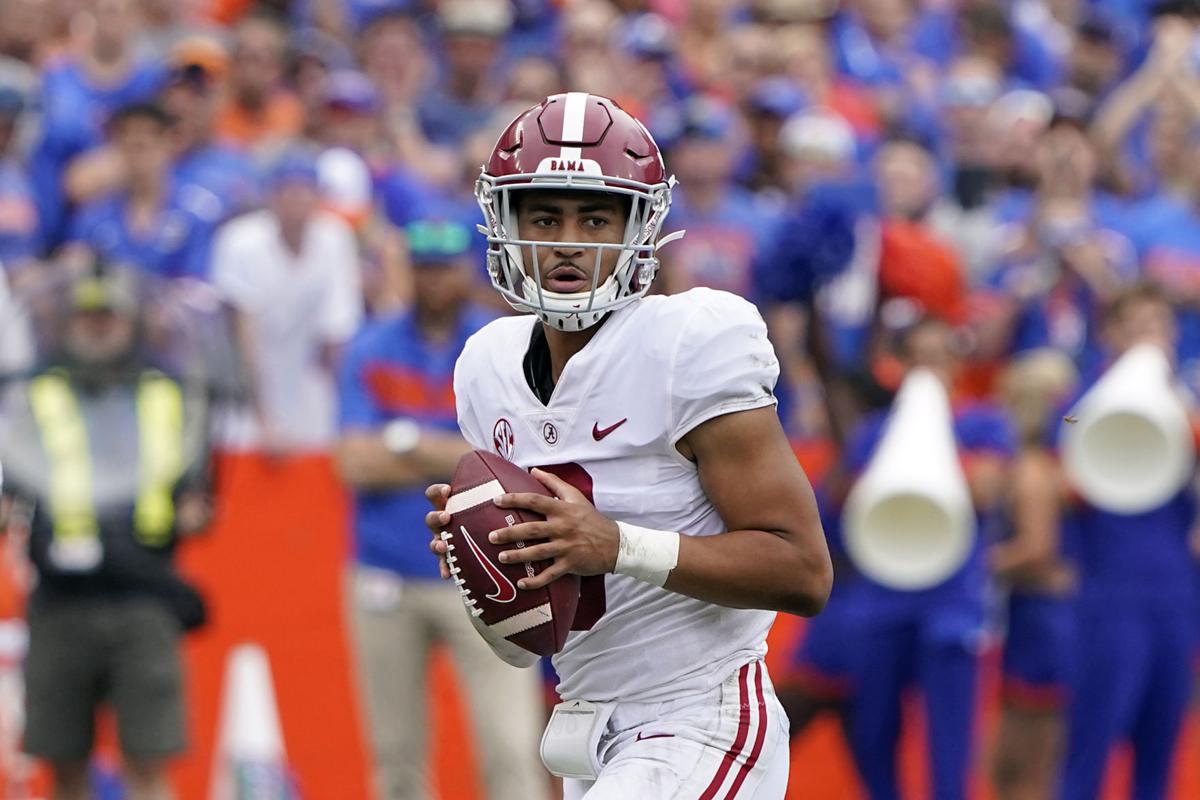 Alabama quarterback Bryce Young looks for a receiver during the first half of an NCAA college football game against Florida, Saturday, Sept. 18, 2021, in Gainesville, Fla. (AP Photo/John Raoux) 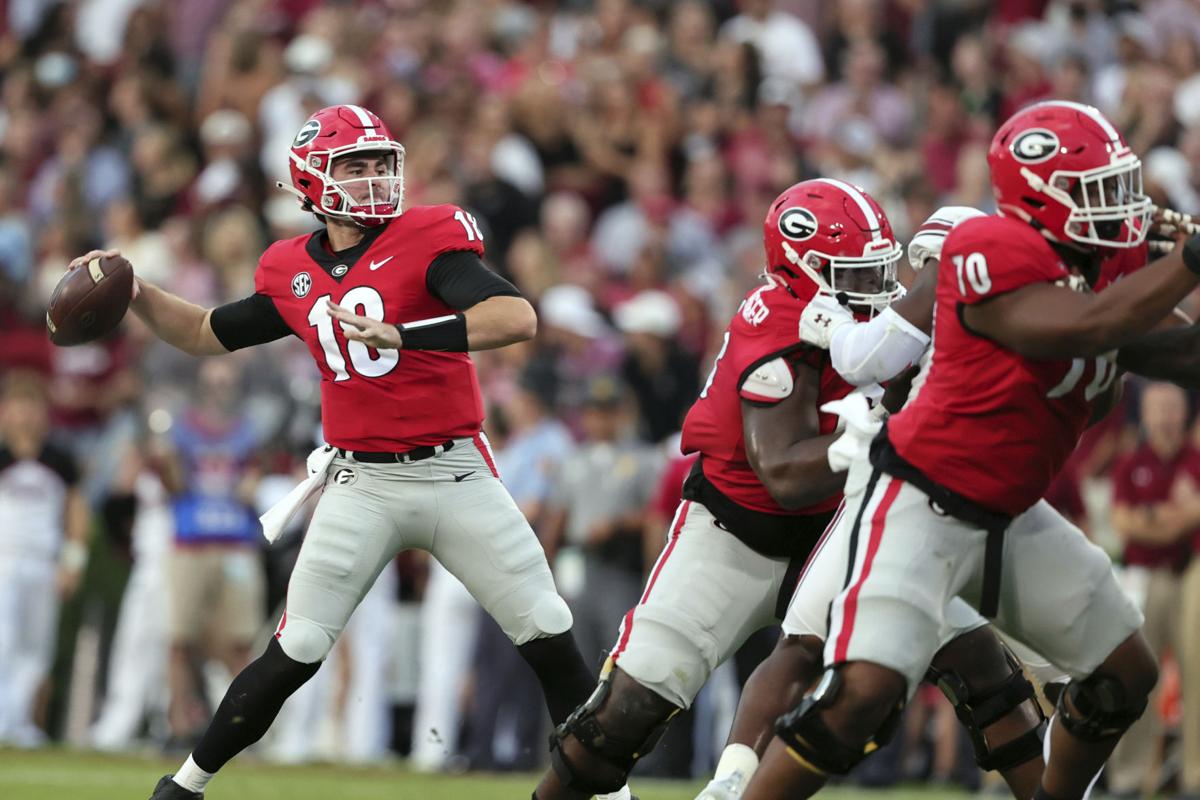 The teams that started the season ranked in the top four all won Saturday, none in particularly impressive fashion.

The result Sunday was Oklahoma, Clemson and Ohio State all dropped in The Associated Press college football poll for the second time this season. The fourth-ranked Sooners slipped one spot. The ninth-ranked Tigers fell three. The No. 10 Buckeyes dropped one.

The exception among the powerhouses was No. 1 Alabama. Not particularly surprising. Alabama was tested for the first time this season, but still beat No. 11 Florida on the road.

Georgia is currently No. 2 behind the Crimson Tide and gained no ground this week.

Is there a case for the Bulldogs to be No. 1? Sure.

The one edge for the Bulldogs is their non-P5 game was a total domination against UAB, a Conference USA title contender.

Alabama's non-P5 game was against Mercer, an FCS team and not even one of the better ones.

Three voters gave Georgia first-place votes the last two weeks. A perfectly reasonable decision, but when it's a close call, the Tide will usually get the benefit of the doubt.

Six national titles in the last 12 years will do that.

Next: vs. Southern Mississippi, Saturday.

Reality check: Tide's run defense — or lack thereof —- received a lot of attention after giving up 258 yards to Florida. Also notable, and not in a good way for 'Bama: Tailbacks ran 24 times for 95 yards (3.95 yards per carry) vs. the Gators.

Next: at Vanderbilt, Saturday.

Reality check: QB JT Daniels returned to action after a sore muscle in his side forced him to miss a game and he threw for 303 yards and three TDs against South Carolina.

Next: vs. Arizona, Saturday.

Reality check: Ducks got a scare when QB Anthony Brown was shaken up against Stony Brook. Fortunately, Brown should be able to get a little extra rest if he needs against Arizona.

Ranked ... just right. Somebody needs to be three.

Next: vs. West Virginia, Saturday.

Reality check: Sooners are usually a big play waiting to happen. Not so far this season. Oklahoma has five plays of at least 30 yards, tied for 77th in the country. Last year, OU ranked 17th in 30-plus plays after finishing in the top three in the nation in that category the four previous seasons.

Next: vs. Colorado State, Saturday.

Next: vs. Villanova, Saturday.

Reality check: WR Jahan Dotson is going to make a run at All-America. He caught 10 passes for only 78 yards against Auburn, but had several tough grabs.

Next: vs. No. 16 Arkansas in Arlington, Texas, Saturday.

Reality check: Aggies got a 70-yard touchdown reception from highly touted freshman Demond Demas against New Mexico. Would help a lot if it was the start of something big.

Reality check: What's with all the penalties? The Bearcats have never finished better than 118th in the nation in penalties per game during coach Luke Fickell's previous four seasons. They're ranked 100th currently.

Next: at North Carolina State, Saturday.

Reality check: Tigers are ranked last in the ACC in yards per play at 4.82 and that's with a game against South Carolina State to balance out the one versus Georgia.

Next: vs. Akron, Saturday.

Reality check: It's not just the defense. QB C.J. Stroud is a good player, but the Buckeyes will probably need more than good against their best competition with that D.

Next: vs. Tennessee, Saturday.

Reality check: Gators had the No. 1 passing offense in the SEC last season and were 11th in rushing. This season: No. 1 in rushing and No. 10 in passing. Dan Mullen can call some plays.

Next: vs. No. 18 Wisconsin in Chicago, Saturday.

Reality check: RB Kyren Williams seems to rip off a big play whenever the Irish get bogged down.

Reality check: QB Matt Corral is the September Heisman, having accounted for 14 touchdowns. He's got a chance to be Mr. October, too.

Next: at Baylor, Saturday.

Reality check: Cyclones defense is No. 1 in the nation in yards per play allowed at 3.40.

Next: vs. South Florida, Saturday.

Reality check: Cougars have been bend-but-don't-break on defense, allowing 6.08 yards per play but only 16.7 points per game. Hard to keep that up.

Reality check: Quick! Name the Razorbacks' quarterback? KJ Jefferson might be the most unheralded QB on a ranked team. The sophomore has only thrown 63 passes, but is averaging 10 yards per attempt.

Next: vs. Massachusetts, Saturday.

Reality check: Turnover margin so far is minus-2. The Chanticleers led the nation at plus-13 last season.

Reality check: A good performance by the Badgers against the Irish would make the Big Ten race seem wide open.

Next: vs. Rutgers, Saturday.

Reality check: Wolverines have been dominant with a clear identity. Michigan has run for more yards in three games this season than it did in six last. Your skepticism is noted.

Next: vs. Nebraska, Saturday.

Reality check: Led by Wake Forest transfer RB Kenneth Walker III (164.3 yards rushing per game), the Spartans' transfer-heavy roster looks like it's ready to be a problem in the Big Ten in Year 2 under coach Mel Tucker.

Next: at Georgia Tech, Saturday.

Reality check: QB Sam Howell has two straight games of 100 yards rushing and 300 yards passing. The last Power Five quarterback to do that was Lamar Jackson of Louisville.

Ranked ... a bit too high, but don’t be surprised if that offensive performance in the loss to Virginia Tech ends up looking like an aberration.

Reality check: It is very possible Washington transfer Jake Haener would be the best quarterback in the Pac-12 this season. Instead, he's making the Bulldogs giant killers again.

Next: vs. Georgia State, Saturday.

Reality check: Tank Bigbsy might be the toughest running back in the country to tackle.

Next: at Stanford, Saturday.

Reality check: Losing to Fresno State does not mean the Bruins can't still be the best team in the Pac-12 South.

Next: at Oklahoma State, Saturday.

Reality check: Stanford has looked functional the past two weeks and Nevada was good enough to beat Cal. The Wildcats pounded both. Intriguing team in Manhattan.

The three-star running back was suspended on Aug. 31 by Badgers coach Paul Chryst after an altercation with a teammate in a residence hall.

Wisconsin kept its spot in the AP poll after its idle week.

ESPN's College GameDay to be at Wisconsin-Notre Dame

Though the Badgers are technically the home team next weekend against the Fighting Irish, GameDay hasn’t visited Madison since 2017.

AP Top 25 Takeaways: Superpowers looking not so super in 2021

Kyren Williams scored two long touchdowns as No. 12 Notre Dame held off Purdue 27-13 on Saturday, a week in advance of the Fighting Irish facing Wisconsin.

Milwaukee native Ralph Kurek fondly recalls scoring the winning touchdown in the closing minutes of the Badgers' last win over Notre Dame in football, which came in 1963.

State Journal beat reporter Colten Bartholomew and columnist Jim Polzin get together on Zoom to break down the Badgers, Big Ten connections to the USC coaching job and make Big Ten picks.

Watch now: Badgers RB Braelon Allen on bouncing back from fumbles, Chez Mellusi and his confidence

Watch now: Badgers RB Braelon Allen on bouncing back from fumbles, Chez Mellusi and his confidence

Alabama quarterback Bryce Young looks for a receiver during the first half of an NCAA college football game against Florida, Saturday, Sept. 18, 2021, in Gainesville, Fla. (AP Photo/John Raoux)