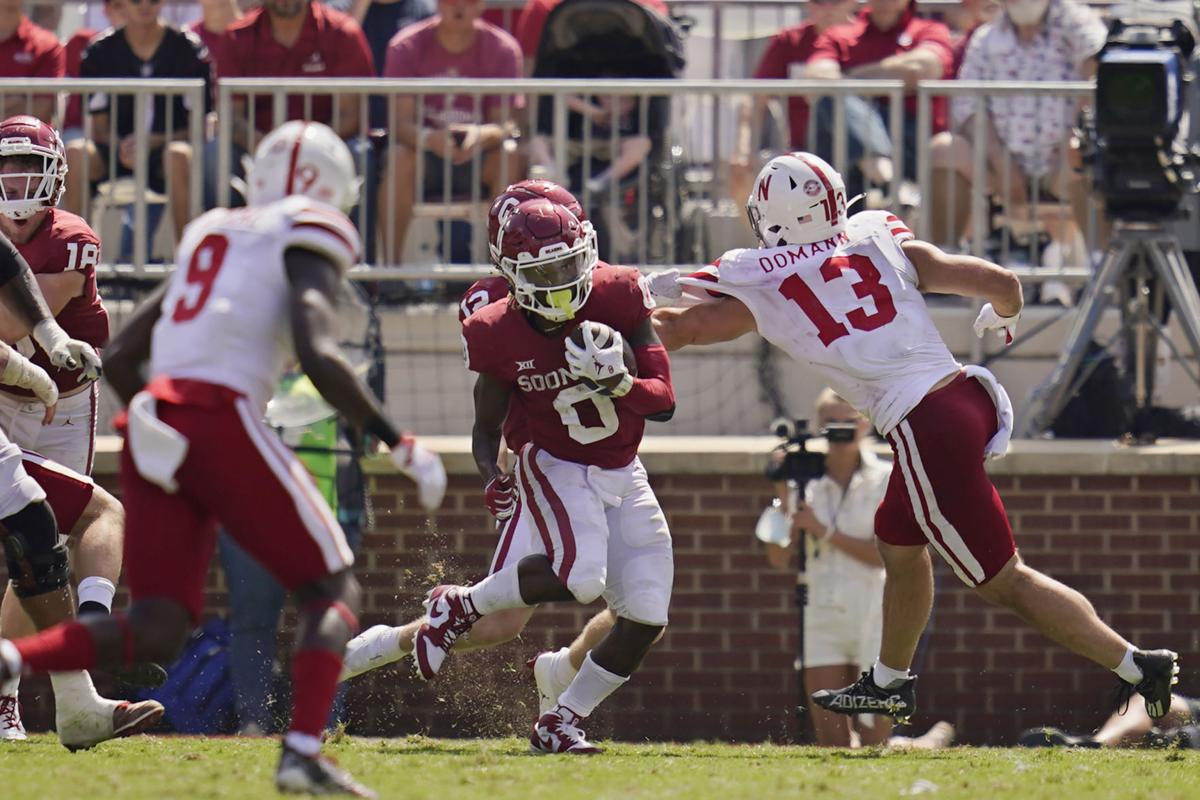 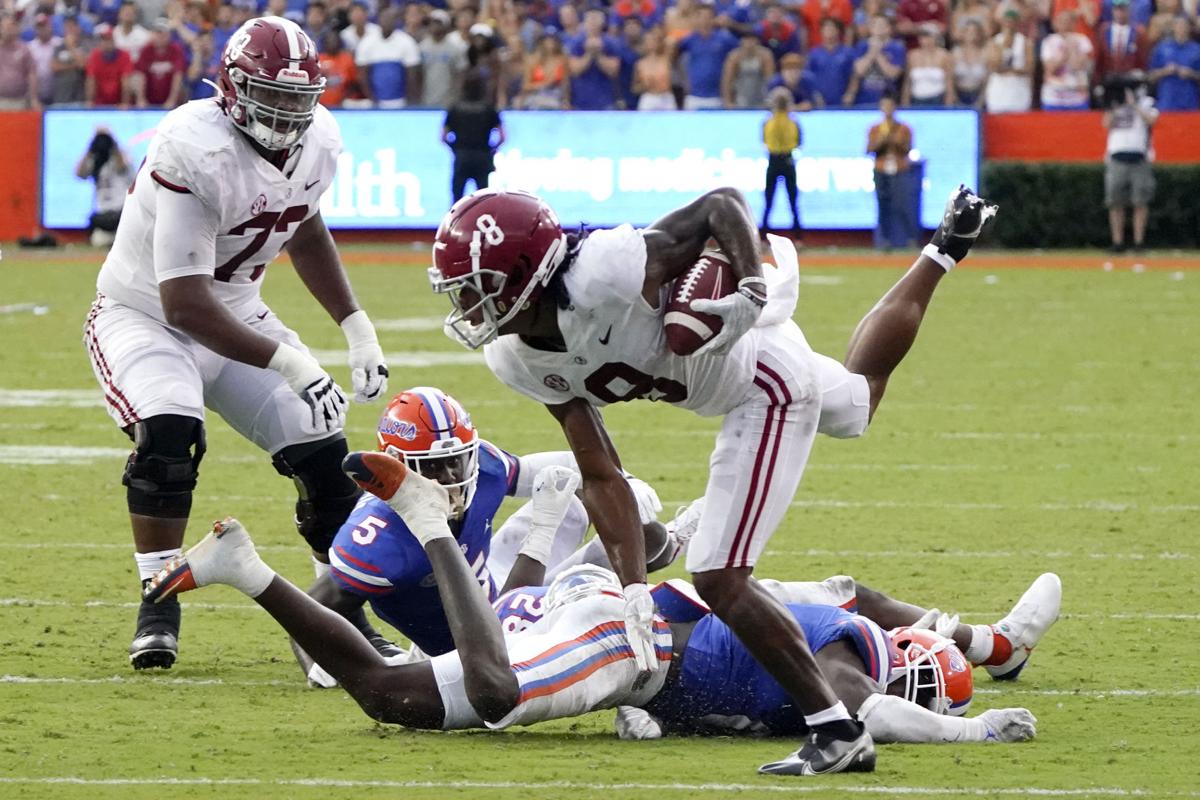 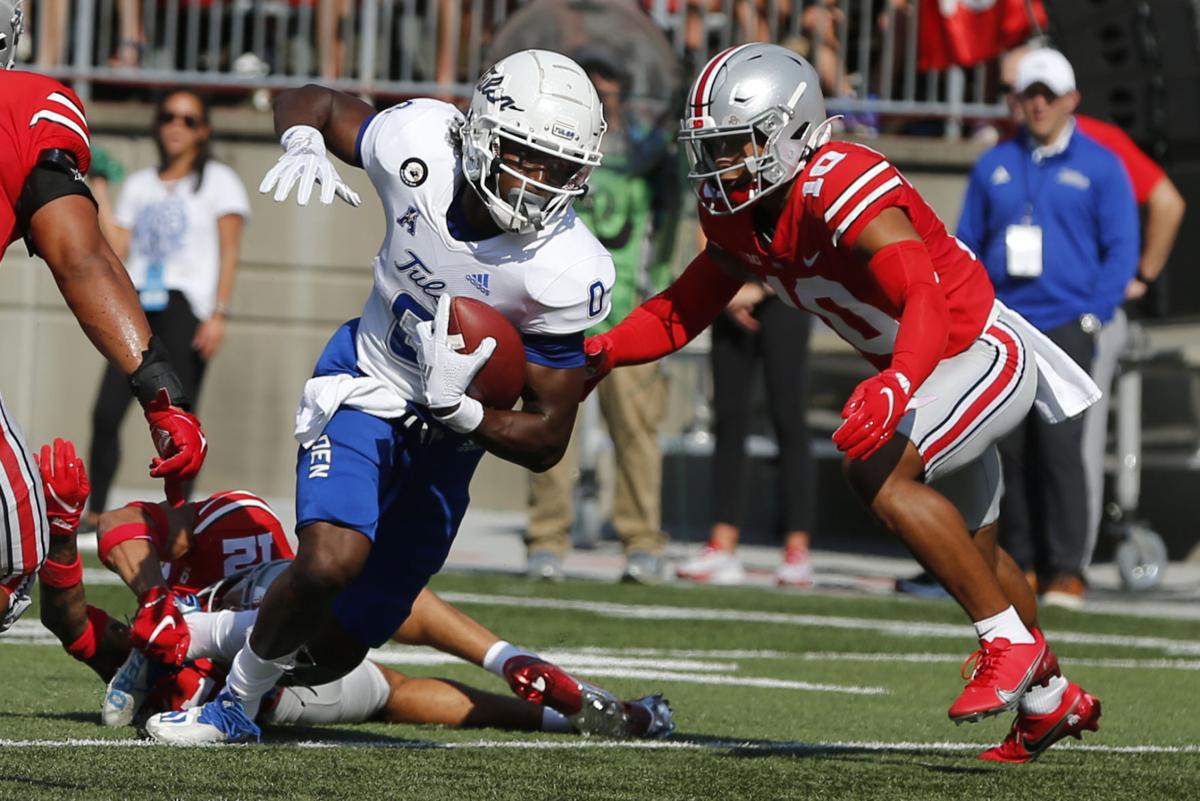 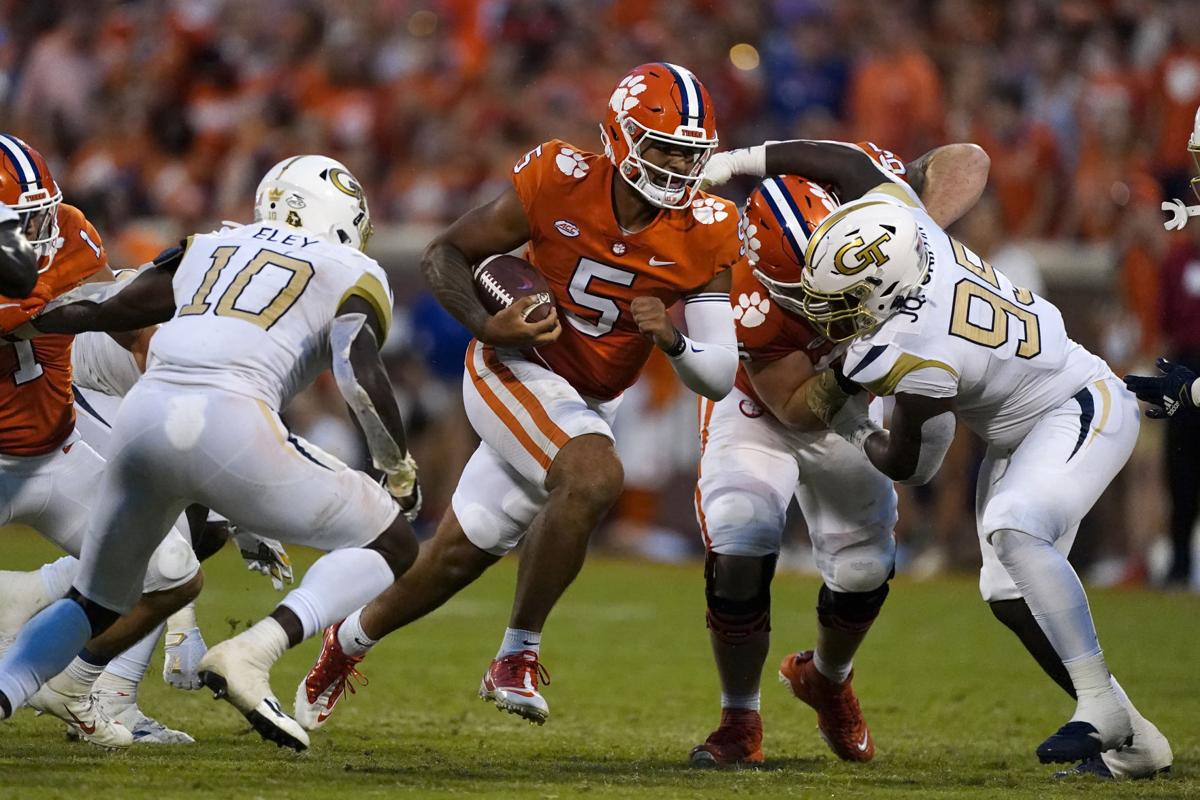 Clemson quarterback D.J. Uiagalelei (5) runs through the line as Georgia Tech's Ayinde Eley (10) and D'Quan Douse (99) close in during the second half of an NCAA college football game, Saturday, Sept. 18, 2021, in Clemson, S.C. (AP Photo/John Bazemore)

Maybe college football's season of the super teams won't be such a foregone conclusion after all?

The top-ranked Crimson Tide faced its first serious challenge, but managed to get out of The Swamp undefeated against No. 11 Florida. The No. 9 Buckeyes, No. 6 Tigers and No. 3 Sooners also were winners — with blemishes.

Those four teams have combined for 20 College Football Playoff appearances. Fans, at least those of other teams, have been lamenting the same old, same old and bracing for another round of it in 2021.

Three weeks in, dare to dream of something different.

After rolling out to a 21-3 lead, things didn't come easy for the Crimson Tide's offense and maybe Nick Saban was right to be concerned about that run defense after the Mercer game. The Gators ran for 245 yards — though they went nowhere on the potential tying 2-point conversion late in the fourth quarter.

Credit Florida coach Dan Mullen with back-to-back games against Alabama where — with very different personnel — the Gators were able to make the Tide's offense operate under pressure by carving up its defense.

Last year, Florida was all about Kyle Trask connecting with Kyle Pitts and Kadarius Toney. The Gators are a quarterback run team now with Emory Jones, who went the whole way with Anthony Richardson sidelined.

"To be honest with you, I hope we see them really soon, like later this season,” Mullen said of the Tide.

Alabama will still be No. 1 in the country, the favorite to repeat as national champion, but the Tide gave just the slightest indication the machine might have a couple of gears that need grease. Especially with consecutive games against No. 20 Mississippi (Oct. 2) and at No. 7 Texas A&M (Oct. 9) coming up soon.

No. 9 Ohio State (2-1) is past the point of needing just a tune up. The Buckeyes pulled away from Tulsa in the fourth quarter thanks to freshman phenom TreVeyon Henderson (270 yards rushing and three TDs).

Those defensive issues that had coach Ryan Day being asked about the status of defensive coordinator Kerry Coombs after the Oregon loss? Still there. Tulsa passed for 428 yards.

Clemson's opening, touchdown-less loss to Georgia seemed no reason to panic and maybe Saturday's long weather delay against Georgia Tech got the Tigers (2-1) out of sorts. Still, 284 total yards against a team that lost to Northern Illinois is disconcerting. Clemson has scored 17 points in two games against FBS opponents.

Of course, the ACC is not exactly showing off a bunch of potential challengers to break Clemson's six-year lock on the conference title.

As for Oklahoma, the hype coming into this year was based on the premise that the Sooners now had a good defense to go with what is almost always a super-charged offense. The assumption being that with Lincoln Riley calling plays, Spencer Rattler would go from good to great at quarterback and the rest of the offense would follow.

Rattler would turn into a Heisman contender like the three quarterbacks (Baker Mayfield, Kyler Murray and Jalen Hurts) who came before him.

What's the old saying about assuming?

Oklahoma's offense is still a long way from from the Baker/Kyler days. In a workmanlike victory against Nebraska, Rattler was 23 of 34 for 213 yards and no picks.

The Sooners have won six straight Big 12 titles, but have only gone unbeaten in conference play once during that time. After watching the Sooners play it close with Tulane and Nebraska, the rest of the Big 12 should be buoyed.

Now, a reality check: Wins are wins and by the time November rolls around all these powerhouses could be rolling toward the CFP again.

But for now, the rest of the country has some reason to hope a real playoff race is possible.

No. 8 Cincinnati came from 14-0 down late in the first half to put away Indiana late, checking the first box on an important stretch of games for the Bearcats if they hope to make a playoff case. UC has a week off before heading to No. 12 Notre Dame on Oct. 2.

The Bearcats got some help in the form of four turnovers by the Hoosiers and a targeting call against IU that swung momentum late in the first half. Still, it's a solid road win.

The problem is solid was not what UC signed up for. Cincinnati's perfect-world CFP scenario had Indiana and Notre Dame as ranked teams. The Hoosiers could still cobble together a good season, but Michael Penix has been a turnover machine and Indiana is probably not going to be the second-best team in the Big Ten East this season.

As for Notre Dame, the Irish improved to 3-0 and none of it has been easy. At least this time they didn't need late-game heroics against Purdue.

Notre Dame has No. 18 Wisconsin next week in Chicago. The Bearcats will be rooting for the Irish on their off week.

Jake Haener transferred out of Washington to Fresno State and turned into a Pac-12 killer.

The Bulldogs' quarterback engineered two late touchdown drives to upset No. 13 UCLA and turn Pac-12 After Dark into a debacle for the West's Coast Power Five conference.

San Diego State beat Utah in three overtimes, No. 23 BYU won at No. 19 Arizona State, with the help of an amazing chase-down by Tyson Allgeier, and Northern Arizona beat Arizona for the first time in almost 90 years.

But nothing was worse than the UCLA loss. Just two weeks ago the Bruins knocked off LSU and seemed on the way to a big season under Chip Kelly.

Then Haener, playing through pain, put on one of the performances of the season, throwing for 455 yards and two touchdowns.

The Pac-12 is 16-16 in nonconference games, including three losses to BYU, five against Mountain West teams — such as Fresno State — and two to FCS schools.

AROUND THE COUNTRY: Nothing is more Pitt than the Panthers losing at home to Western Michigan of the Mid-American Conference the week after beating an SEC team (Tennessee) on the road. ... Add No. 15 Virginia Tech losing at West Virginia and Michigan State taking it to No. 24 Miam i to Pitt's loss and the Atlantic Coast Conference had another rough week in nonconference play. ... Memphis won a wild game against Mississippi State with one of the more bizarre punt return TDs you'll see — and one that Bulldogs fans will be fuming over ... Kedon Slovis got his opportunity at USC two seasons ago because of an injury to JT Daniels. Did Jaxson Dart just Wally Pipp Slovis? The Trojans' freshman came off the bench in USC"s first game since Clay Helton was fired to pass for 391 yards and four touchdowns i n a rout of Washington State. ... Florida State is 0-3 for the first time since 1976, the late Bobby Bowden's first season as coach. Rutgers is 3-0 for the first time since 2012. ... Hope college football doesn't have to wait 90 more years to see Auburn play at a Big Ten stadium. Penn State-Auburn for a white out at Beaver Stadium was Exhibit A in the case against banning neutral site games.

Follow Ralph D. Russo at https://twitter.com/ralphDrussoAP and listen at http://www.westwoodonepodcasts.com/pods/ap-top-25-college-football-podcast/

The teams that started the season ranked in the top four all won Saturday, none in particularly impressive fashion, but only Alabama didn't slide in the AP poll.

Updated odds on the Heisman Trophy

Clemson quarterback D.J. Uiagalelei (5) runs through the line as Georgia Tech's Ayinde Eley (10) and D'Quan Douse (99) close in during the second half of an NCAA college football game, Saturday, Sept. 18, 2021, in Clemson, S.C. (AP Photo/John Bazemore)