Doubt and surprise often are the undertones of the replies Ashley Cornwell receives when she tells others about her future plans.

The University of Wisconsin senior from Rock Springs is going to be a football coach. Scratch that — she already is a football coach and she’s going to continue that career path. She has no time to explain herself to skeptics — she’s too busy hustling for her next move.

“I have had people doubt it a lot,” Cornwell said. “But I always knew this is where I’m meant to be. I am very religious and I think God gave me a passion in my heart for this, so I always knew it’s going to work out. It’s just the patience and praying and just working hard. I know this is going to be my career, so I’m very confident.”

Cornwell’s been working for the football program since July 2019 and is entering her third season as a student assistant coach this fall. Her ambition helped net her one of 32 Bill Walsh Diversity Coaching Fellowships this fall. The Walsh fellowship program places minority coaches onto NFL coaching staffs during training camp in order to establish connections and hopefully lead to increased minority hiring.

To compete in the 1970s, Wisconsin women's athletes dealt with cramped cars and uniform sharing

Cornwell will be working for the Tennessee Titans when their training camp begins on July 23, likely aiding offensive coaches on all aspects of the job, such as leading drills in practice, creating film cut-ups and more.

Her connection with the Titans began in March after she was invited to the NFL Women’s Forum. She had Tennessee coach Mike Vrabel — a 14-year NFL linebacker with three Super Bowl rings entering his fifth season as the Titans’ coach — circled as one of the speakers she wanted to hear. She was assigned to a breakout session with Vrabel, in which she got to ask questions about how he’d scheme a defense against particular red-zone situations.

“We just had really good dialogue and I felt good about it,” she said. “We just kept it going and that’s how I got the fellowship.”

Cornwell’s love of football was sparked as a child when she played flag football with her twin brother, John. She didn’t know how that passion would manifest itself in her life, but found an outlet while in high school when she began helping coach in Reedsburg’s program.

That experience led her to spend the latter portion of her senior year in high school applying for any job she could find in the Badgers football program. She was driven to find her way in, believing she would find ways to contribute and immerse herself in the program.

Cornwell’s start in the video department taping practices led to her helping out with recruiting, as those teams share a floor in the McClain Center. She began breaking down film of prospects and taking notes for coaches.

Since becoming a student assistant coach, Cornwell has worked on each side of the ball. She started with special teams and continues to aid coaches by charting specialists’ work during practices. She’s been involved with creating scouting reports, scout-team play cards and putting together teach tape for multiple position groups on offense and defense. Former UW offensive coordinator and offensive line coach Joe Rudolph got her involved with the offense and initiated her love for offensive and defensive line play.

She’s working with the defensive line this year, her last at the school before graduating in December. She credits the coaching staff for continually pushing her and giving her new challenges, and for exposing her to each phase of the game. That allows her to have an array of experiences to draw upon as she applies for graduate-assistant and entry-level NFL jobs.

“I’m very blessed I’ve had a taste of all three phases at Wisconsin,” Cornwell said. “I’ve interacted with the entire staff, I’ve done stuff for the entire staff, and I’m very lucky they’ve all been amazing and supportive.

“I’m excited to represent Wisconsin. It means a lot to me and I just kind of want to show everything that everybody put into me here. I just want to show it paid off and what I can bring to the table. I’m excited to show my work ethic, my eagerness to learn and just to represent the sport and help out the Titans any way I can.”

Cornwell describes herself as a hands-on coach, willing to jump into a situation and show exactly how a technique is supposed to be applied.

Even a short conversation with Cornwell reveals her determination. She’s got clear goals of becoming a coordinator and knows the steps she must take to reach them. That focus came from her parents, she said. They pushed her to become a first-generation college student and instilled a mentality of never quitting.

“My parents were very driven to make sure that me and my brother did well academically, and anything that we chose to sign up for, we were going to do a good job and we were going to finish it,” she said. “When I have a goal in mind, I always make sure I finish it and I do the best job that I can.”

Consensus three-star linebacker Tyler Jansey became the first member of the Badgers’ 2023 recruiting class when he announced his commitment on Jan. 28, 2022.

The 6-foot-1, 225-pound inside linebacker ranks as the 10th-best player in his class in Illinois, per Rivals. He had 36 tackles and 5½ sacks in a six-game season as a sophomore and followed that up with 88 tackles and 16 tackles for loss in 11 games as a junior, according to MaxPreps. Jansey chose UW over offers from Eastern Illinois, Eastern Michigan, Toledo, Miami (Ohio) and others.

I want to thank basha football and basha high school. I want to thank Coach Kelly for everything. Lastly my family. I’m beyond excited to say that I have committed to further my education and football career at the University of Wisconsin! Joshua 1:9 Romans 11:36 #OnWisconsin pic.twitter.com/kob6QX1wnb

James Durand became the first offensive lineman in the 2023 class when he committed on May 6, 2022.

The Chandler, Arizona, product is a 6-foot-6, 285-pound tackle/guard who had a number of offers. Arizona, BYU, California, Colorado, Indiana, Iowa State, Oregon State and Utah were among his suitors. Durand visited UW in late March and received his offer that weekend.

Durand has quick feet and good balance, which allow him to wall off defenders in pass blocks.

Just a kid from Broadview,IL . Thank You to everybody who was there from the start. #Blessed pic.twitter.com/r7cFEMUdcA

Consensus three-star defensive back Justin Taylor became the first member of the secondary to join the class when he orally committed on May 13, 2022.

Taylor is a 6-foot, 185-pound athlete who could play cornerback or safety at the next level. He held offers to Kansas State, Army, Air Force and others before committing to UW. The Nazareth Academy (La Grange Park, Illinois) product is a native of Broadview, Illinois.

His tape shows good speed and instincts when playing the ball in the air.

The Badgers dipped into the talent-rich state of Ohio for talented running back Jaquez Keyes. Keys is a four-star prospect according to Rivals, but a three-star in 247Sports’ rankings.

Keyes’ relationship with UW moved quickly. He took a visit to UW on April 16 and tweeted he received an offer the next day. Keys orally committed to UW on May 13, 2022.

UW recruiting success in Illinois continued with the commitment of three-star defensive lineman Trey Pierce. Pierce joined the class on May 19, 2022.

Pierce is listed at 6-foot-3 and 280 pounds and his recruitment was heating up when he committed to UW. He held offers from Iowa State, Illinois, Minnesota, Purdue and others. His highlight tapes show good upper-body strength and the ability to stay low and not get moved off his spot.

Three-star tailback Nate White from Milwaukee Rufus King became the sixth recruit in the 2023 class when he announced his decision in late May.

The 6-foot, 175-pound speedster had offers from Iowa State, Minnesota, Purdue, Kansas and others before choosing UW. White averaged 8.6 yards per carry and had 20 touchdowns as a junior, according to WisSports.net statistics.

UW added long and strong outside linebacker Jordan Mayer to the recruiting class on June 12, 2022.

The Tallmadge, Ohio, product had almost 1,500 receiving yards as a junior and had offers from Illinois, Indiana, Kentucky, Pittsburgh, Purdue and others. The 6-foot-1, 200-pound receiver committed June 13, a day after his official visit to UW.

The College Station native is a three-star recruit according to Rivals and he held offers from Baylor, California, Texas Tech, Vanderbilt and others before choosing UW. Listed at 5-foot-11 and 175 pounds, Tisdell shows fluidity in his hips and strong hands at the point of attack.

Three-star receiver prospect Trech Kekahuna added another member to the Hawaii to UW pipeline when he orally committed on June 19.

Kekahuna has the agility to contribute as a returner.

The Badgers pulled four-star cornerback Jace Arnold out of Georgia to secure their 11th commitment of the class on June 22.

Arnold is a willing tackler whose speed will be an asset for UW defensive coordinator Jim Leonhard.

UW snagged another recruit out of Illinois when Jamel Howard Jr. announced his commitment to the Badgers on June 26, 2022.

Howard is a 6-foot-2, 320-pound interior defensive lineman out of Marist High School in Chicago and a three-star prospect per both 247Sports and Rivals. Howard's high school film shows an explosive lower-body that allows him to blow offensive linemen off the ball.

Howard and 2022 recruit Curt Neal look to have the abilities be anchors of the Badgers' 3-4 defense in the near future.

Terek is a 6-foot-6, 290-pound offensive lineman who is most likely to fit at tackle in the Badgers system. The Glenbard West High School product picked the Badgers over offers from Illinois, Iowa, Michigan and others.

UW receiver Chimere Dike describes the inspiration for his youth camp in his hometown of Waukesha.

Some of the biggest games in Badgers football history have been against UCLA and USC, programs joining the Big Ten Conference in 2024. 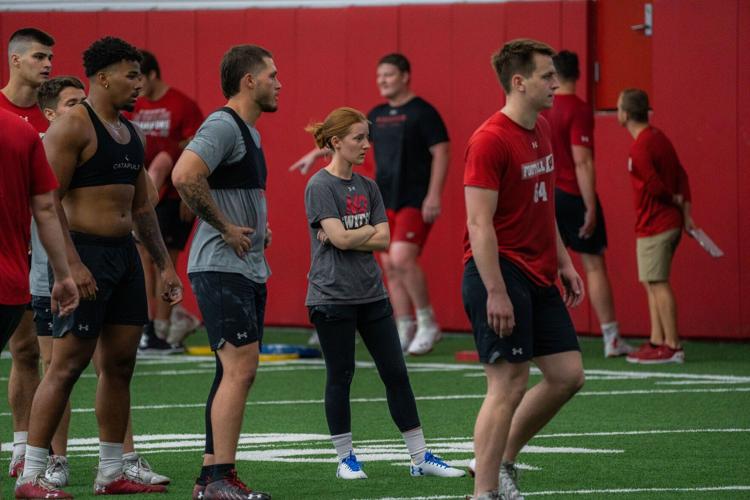 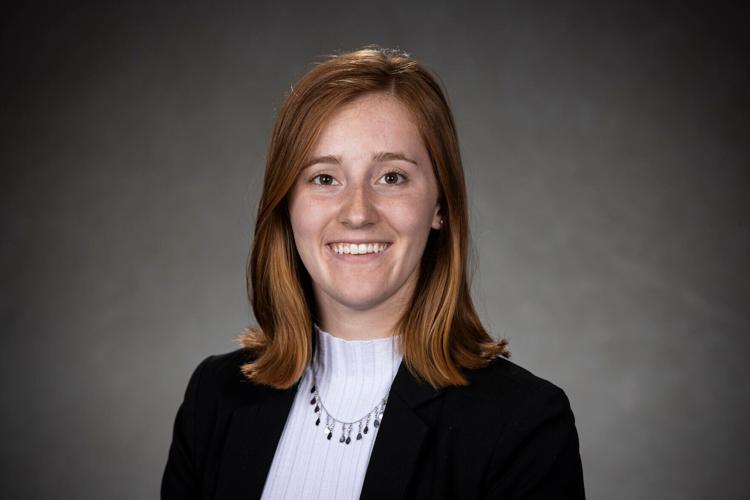