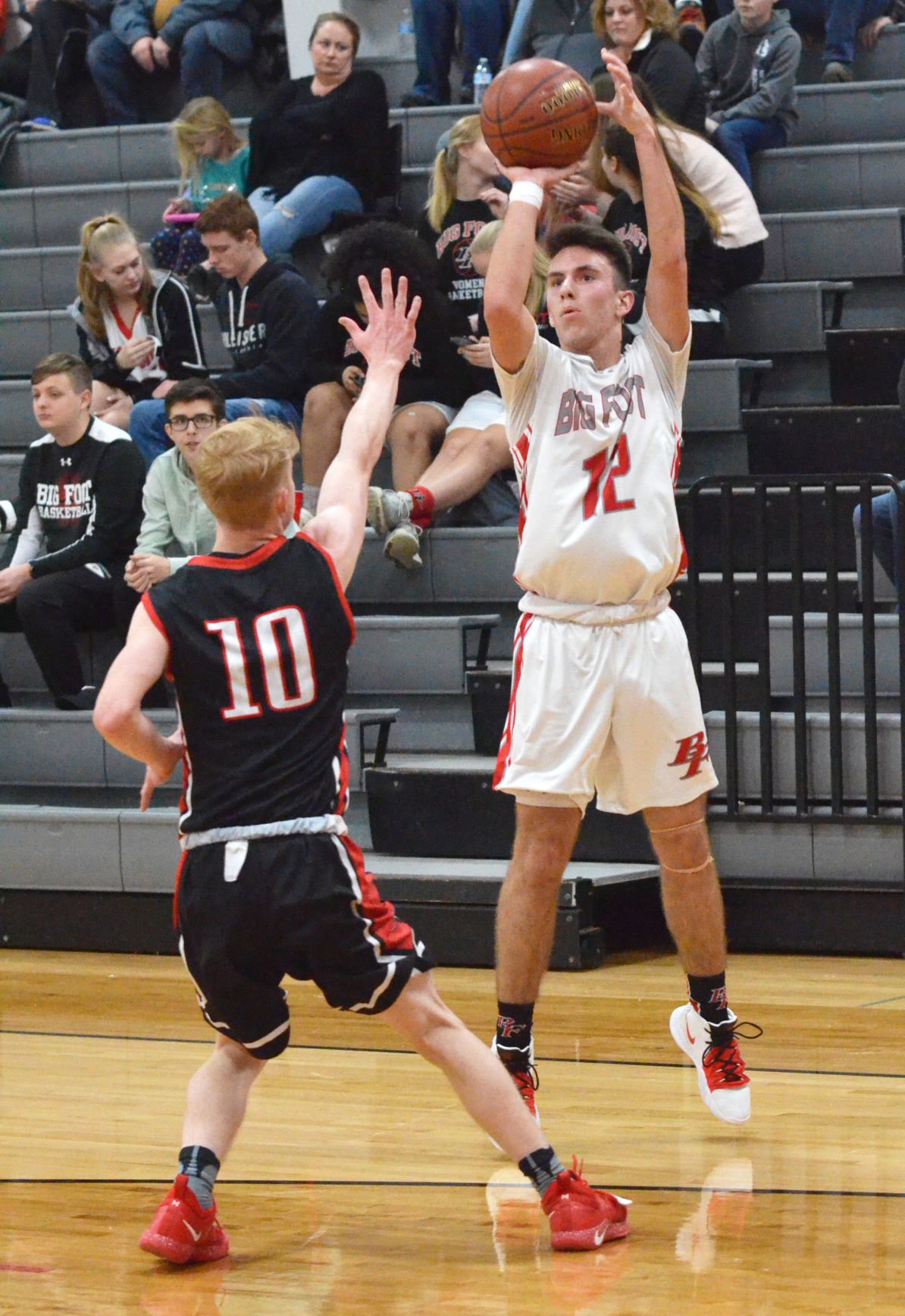 Basil Demco, right, gets set for a three-point shot Dec. 30 in Big Foot’s 76-49 loss against Columbus. 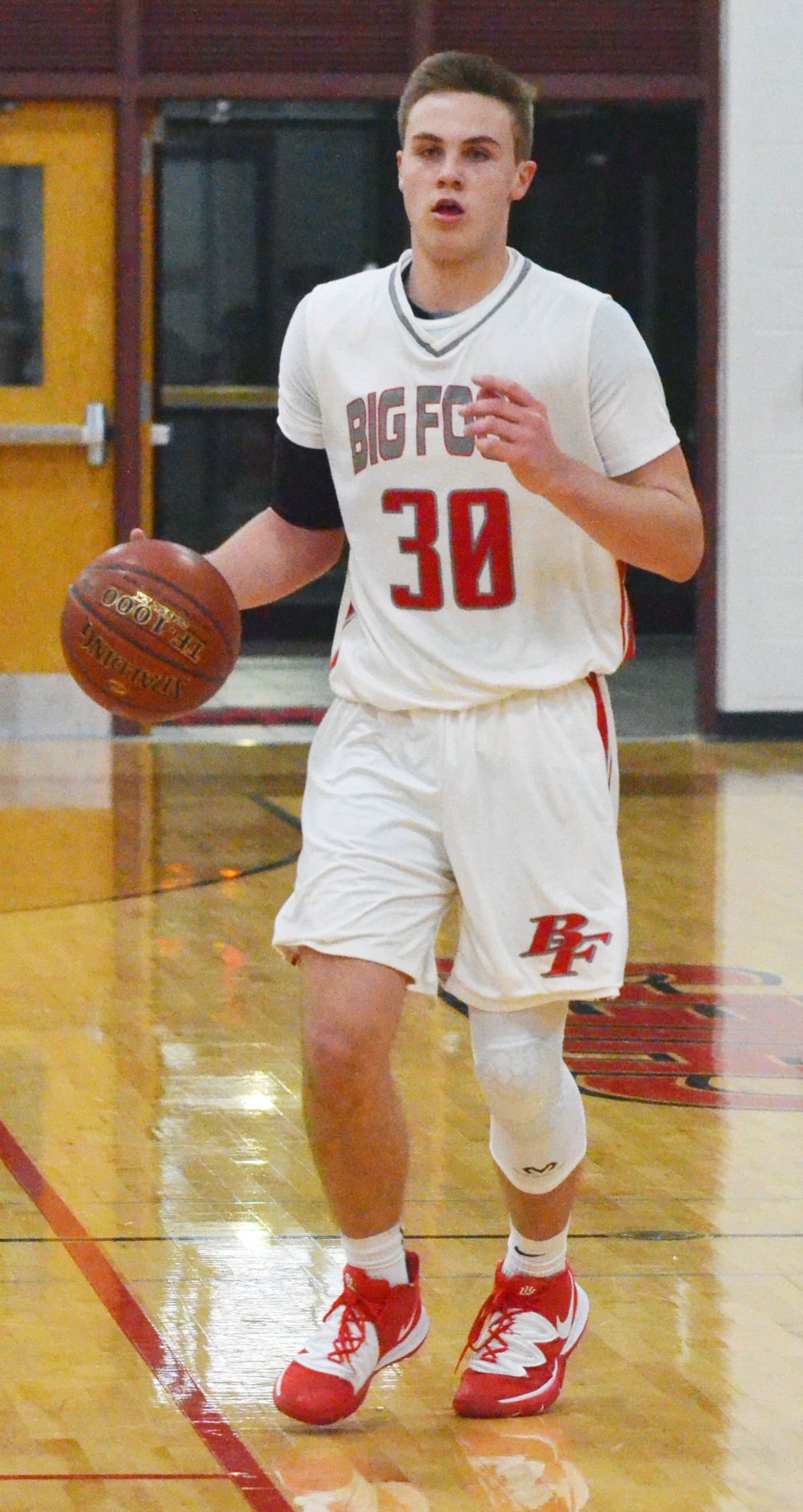 WALWORTH — For the sixth game in a row, the Big Foot boys basketball team Dec. 30 came out on the wrong end, losing a 77-49 matchup against Columbus to bring their record this season to 0-6.

While the scores have not yet tilted in Big Foot’s favor, the team has undeniably gotten better in a variety of ways with each game they have played. That said, the team has a way to go before they look like world beaters.

“It’s hard to see those when you’re sitting at 0-6,” head coach Hunter Price said. “I thought we did a nice job of that, little things we can build off of. But overall they know it — we just have to get better.”

As an example of the improvements, the Chiefs came out of the gate strong against Columbus. Both teams took turns jumping into the lead early on, and after a three-pointer by Big Foot guard Basil Demco at the 12:38 mark, the game was tied 11-11.

However, the Chiefs could not keep pace any longer than that, as the Cardinals went on a 7-2 run followed by an 8-2 surge that gave them a double-digit lead, 26-15, that would not dip back into single digits for the remainder of the contest.

Early in the game, the Chiefs were able to hang tough with the Cardinals because they were able to take care of the ball enough to put up quality shots. Once they began slipping up, though, Columbus took advantage to grab the lead.

“I think we had three turnovers and four air balls, which I count as a turnover, in that three- or four-minute stretch. And they turned those all into points,” Price said. “If you do that, you can’t come back from it. We’ve just got to take care of the ball.”

As the half went on, Columbus continued to grow its lead, and a buzzer-beating three-pointer by Ben Emler gave the team a 42-25 lead at the break.

That lead continued to grow throughout the second half, reaching its peak at a 33-point deficit, 67-34, with nine minutes left in the game. By the end, the Chiefs’ cut the margin of defeat down to just 27 points at 76-49.

Gus Foster was the leading scorer for the Chiefs in the game, tallying 18 points. Demco was second on the team with 11.

Big Foot’s season has not gotten off to a fast start, but with the vast majority of the squad having little to no varsity experience prior to this year, as well as having three sophomores in the starting lineup, some early speed bumps were to be expected.

With that in mind, every game is a learning experience for the Chiefs, and while Price says he does not want to rely on youth as an excuse, getting tossed into the fire and making rookie mistakes will give the players plenty to learn from.

If Big Foot wants to see an example of that type of growth in a young team, they have one in their own backyard: the rival Williams Bay Bulldogs. The 2018-19 Dogs featured a plethora of sophomores, and got off to a 3-10 start before finishing the regular season on a 5-3 stretch in the last eight games.

Whether the Chiefs can replicate that type of turnaround is yet to be seen, but as the Bay proved, it is not out of the realm of possibilities.

Basil Demco, right, gets set for a three-point shot Dec. 30 in Big Foot’s 76-49 loss against Columbus.