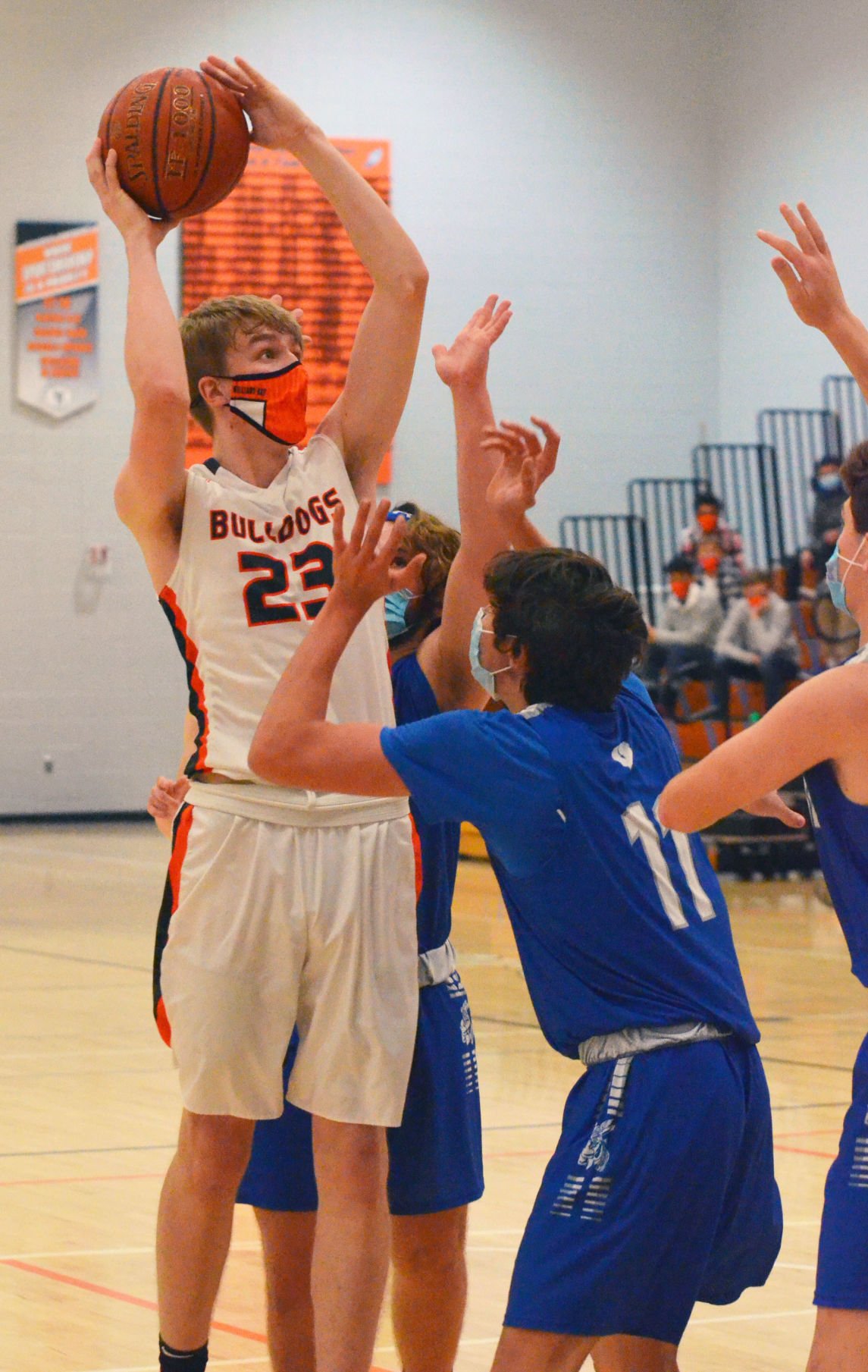 Williams Bay senior Ben Venteicher rises up in traffic during his 29-point performance in the 92-88 win over Parkview on Dec. 8. 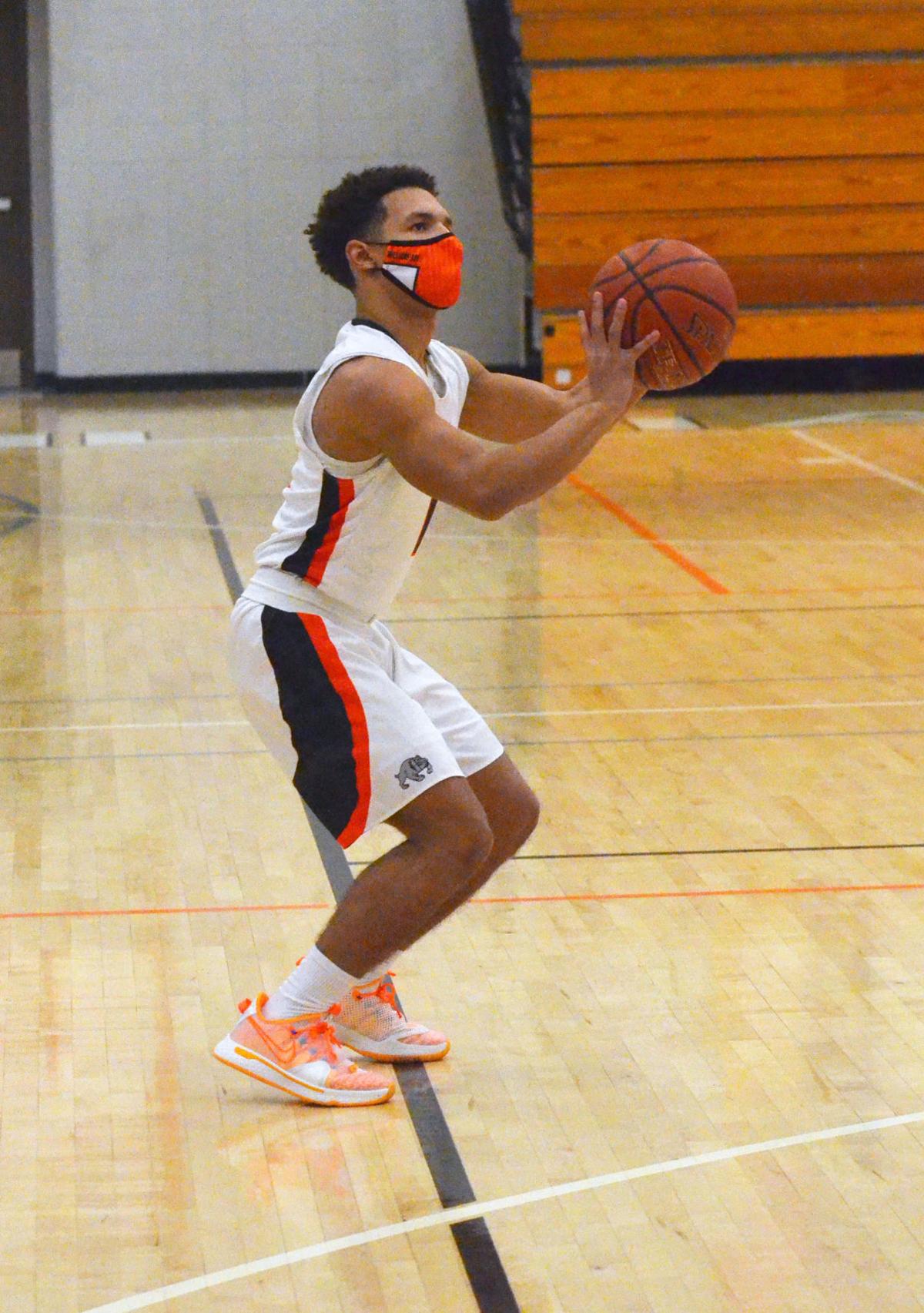 Senior Jaden Randall sets up for a wide open three-pointer in Williams Bay’s Dec. 8 win over Parkview, before the team was forced to cancel games.

Seniors Ben Venteicher and Jaden Randall have been playing basketball together for Williams Bay for a while. They came off the bench as freshmen, and have been the team’s offensive centerpiece for the past two seasons.

They flexed their combined muscle on Dec. 8 when Venteicher scored 29 points and Randall added 27 in a 92-88 win over Trailways Conference rival Parkview.

Even though their final scoring totals were just two points apart, it was not an even distribution throughout the game for Venteicher and Randall. Randall scored 21 points in the first half while the center Venteicher notched 21 of his own in the second half.

The ability for one to dominate while the other struggled illustrated how potent a force the dyad is for the Bulldogs.

“We kind of just feed off each other,” Venteicher said. “It’s nice knowing if I’m struggling like I was in the first half there, Jaden can go out and be a bucket when we need it.”

“Same thing for you,” Randall said. “I was having a rough second half, but knowing you were there every time was what made us win the game.”

Things were not always rosy for Williams Bay. Parkview was the better team early, holding a slight lead for most of the first nine minutes until a layup by Venteicher gave Bay an 18-17 lead. That sparked a 12-2 run that put the Bulldogs up 28-19 with 7:13 left in the half.

With less than four minutes left in the half, Williams Bay led 37-27. That’s when Parkview caught fire. The visiting Vikings rattled off a 12-4 run, cutting the deficit down to one possession—42-39—at the break.

The key to the first period was the long-range shooting of Randall, who had made four three pointers.

When play resumed, Parkview was ready to defend the outside shots, which in turn allowed Randall to find Venteicher and company inside for easy buckets down low.

“All of a sudden they’re thinking ‘hey, this guy can shoot a little bit,’” said head coach Troy Nottestad. “They stepped out on him a little more, then he had a couple nice plays in the second half where he dished to his teammates after they got up in his face.”

Parkview chipped away at that deficit over the next six minutes, cutting it down to one possession, 75-72, with 5:29 remaining. Ninety seconds later the Vikings took their first lead since early in the first half on a layup by senior Tyler Oswald. Parkview was up 78-75 and Nottestad called a timeout.

In situations like this last year, the junior-heavy Williams Bay team often struggled to regain the momentum they lost and sputtered to the finish. Now the senior-laden roster with an added year of game experience responded to their coach’s adjustments.

“We were there last year and didn’t succeed, so then this year we were able to fix things at the end of the game,” Nottestad said.

The fixes worked. After the timeout, the Bulldogs scored eight straight points to go back up 83-78 with 1:51 remaining. They maintained that lead for the rest of the game to preserve the victory.

While Venteicher and Randall were the leading scorers for the Bay, junior Henry Mannelli also hit double digits for the Dogs with 10 points.

Parkview has been a thorn in Williams Bay’s side recently, winning five matchups in a row dating back to the second half of the 2017-18 season.

While the team was glad to get over the hump against their frequent foe, the Dogs were disappointed with their defense.

“We realize that we scored a lot of points, but we let up a lot of points,” Venteicher said. “There’s a lot that we can improve on. We hope that at the end of the year we look back on this and, sheesh, that’s as good as we played?”

+8 Photos of the area's top 10 basketball players in action

Williams Bay senior Ben Venteicher rises up in traffic during his 29-point performance in the 92-88 win over Parkview on Dec. 8.

Senior Jaden Randall sets up for a wide open three-pointer in Williams Bay’s Dec. 8 win over Parkview, before the team was forced to cancel games.