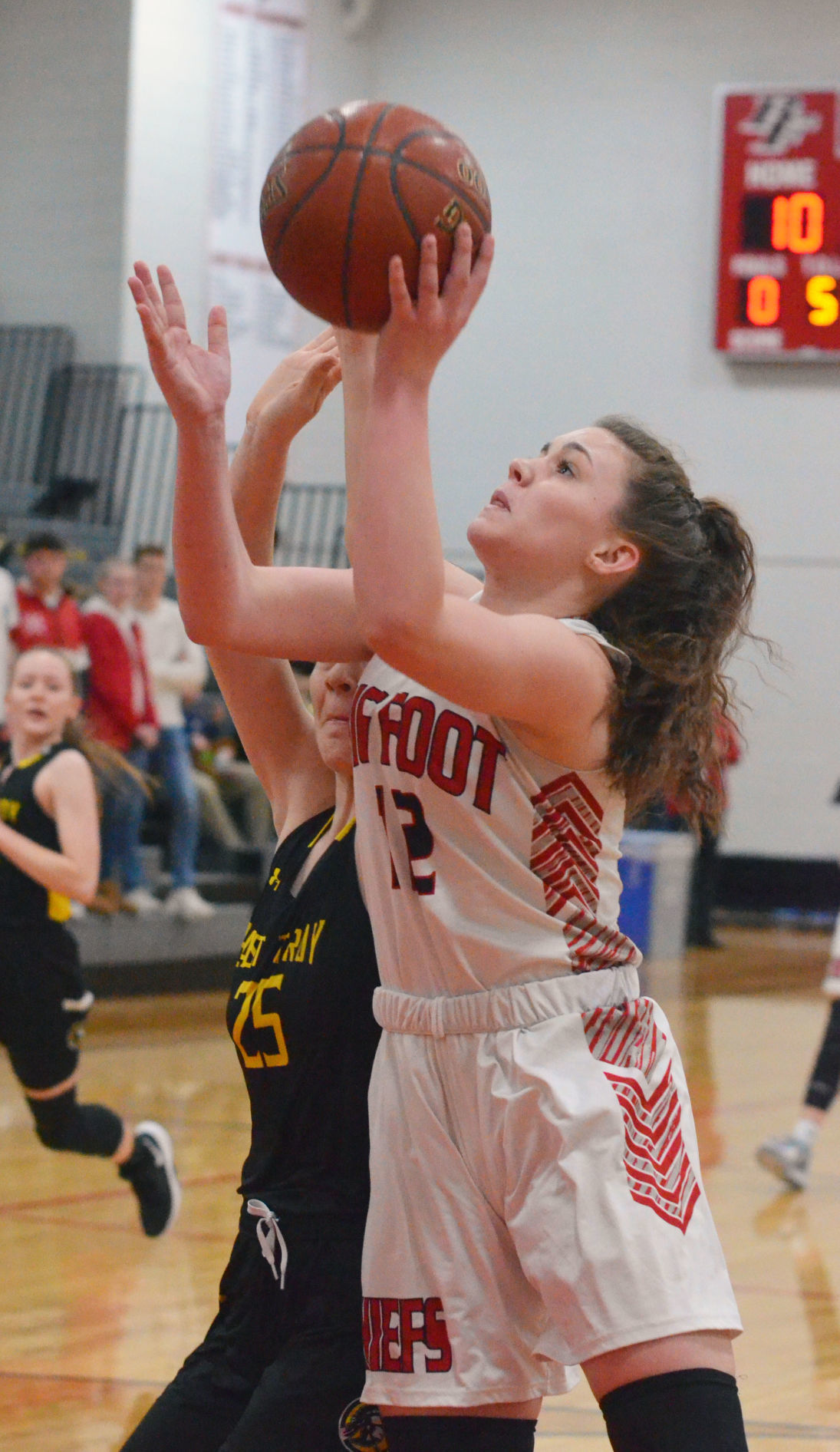 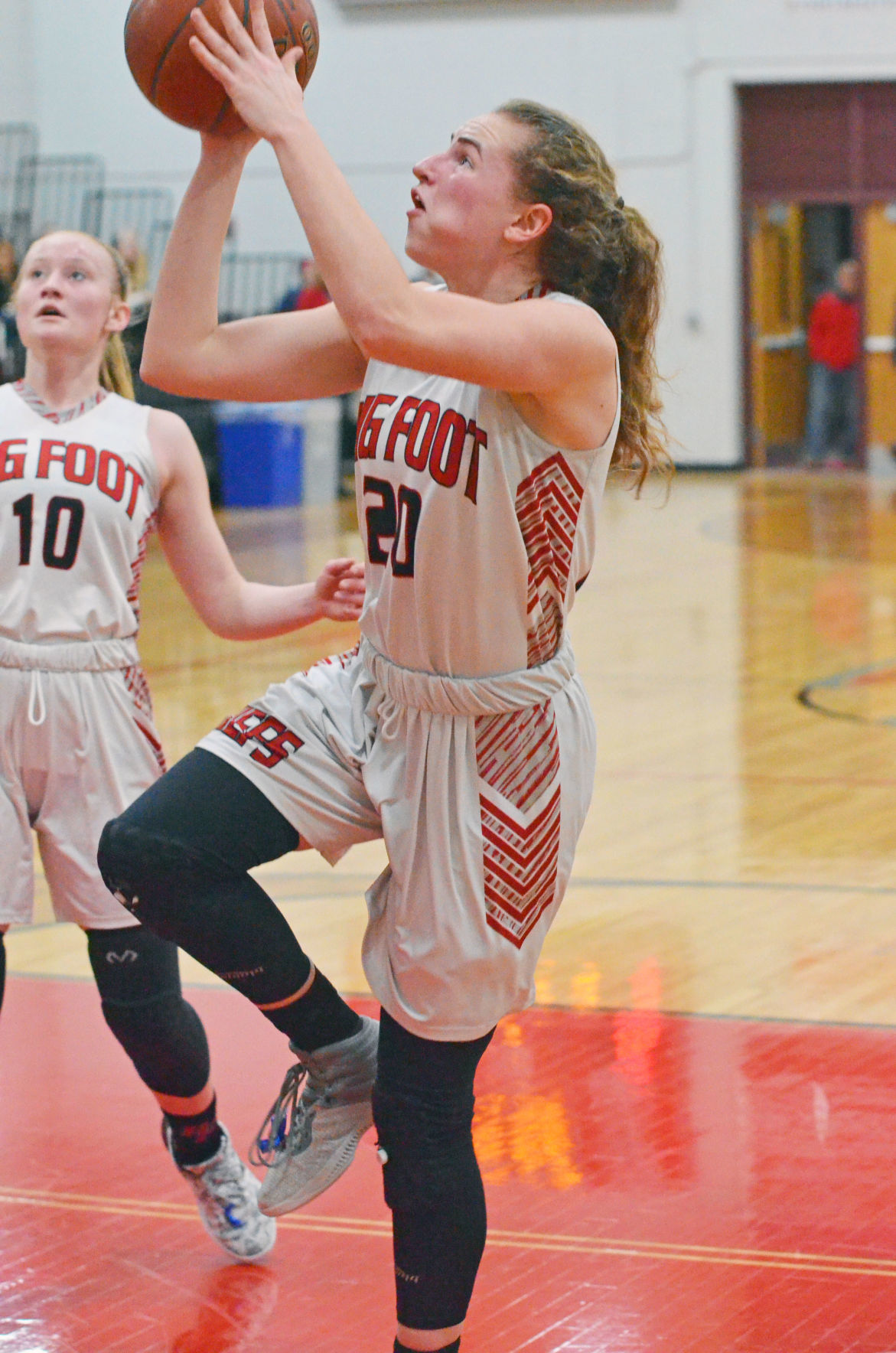 Big Foot senior Viola Larson goes up for a shot Feb. 25 during the team’s 60-34 playoff win over East Troy.

The Chiefs finished with a 7-15 record and an eighth-place finish in the Rock Valley Conference standings, showing flashes of strong play along with mistakes in an up-and-down year overall.

In that respect, the playoffs provided the Chiefs an opportunity to shake off their blues and start fresh, which is something Dowden and his coaches emphasized to the girls.

The approach worked, as Big Foot overcame its bumpy regular season in the first round of the playoffs on Feb. 25, beating East Troy by a resounding 60-34 score to keep the season going.

Dowden believes the 26-point win showcased the Chiefs’ abilities as a team more than the 7-15 record would suggest.

“We battled, we had good energy, we played together, and that’s more of what I envisioned,” Dowden said.

Also factoring into Big Foot’s strong play was the fact that the team has a significant number of seniors on the squad who have played basketball together since elementary school. With a loss ending their careers, they want their season to last as long as possible.

“As cheesy as it sounds, we are a big family and we don’t want this to end. Playing for each other kind of took us up one more notch,” senior guard Olivia Peterson said.

While the whole Chiefs squad is not seniors, the team’s younger players took the message to heart as well.

“All the underclassmen know this is our last one. They have more, but they want to play for us,” senior guard Reagan Courier said.

Early on in the Feb. 25 contest with East Troy, the two teams stayed close. East Troy had a slight upper hand with a 14-8 lead with 13:35 on the clock. However, that Trojan lead did not last much longer.

Over the next seven and a half minutes, the Chiefs ran away with the game, outscoring East Troy 17-2 to take a 25-17 lead with six minutes left until halftime.

By the break, Big Foot had extended the lead to double digits, with a 34-24 score at halftime.

The second half played out similarly, with the Trojans starting well, before the Chiefs shut them down for an extended stretch.

East Troy hit a two-point shot and a three-pointer in the first three minutes of the half, cutting the deficit to just five points, 34-29. They would not score again for the next eight minutes, as Big Foot went on a 16-0 run to extend its lead to 50-29 before the Trojans finally got back on the board with a basket with 7:45 left in the game.

Big Foot began shifting their starters out of the game shortly thereafter, but it did not slow them down. By the end of the game, the Chiefs’ lead was up to 60-34.

The 60-point final score was the second-highest of the season for Big Foot, only two points lower than their season-high of 62-46 over Columbus on Dec. 30. Dowden thought that the fresh-start mentality might have influenced his team’s high-scoring performance.

“That’s the big thing — be confident, shoot open shots, and go from there,” Dowden said.

The win over East Troy set the Chiefs up to face another Rock Valley Conference foe in the second round. The team traveled to Whitewater on Feb. 28, and the host Whippets ended Big Foot’s season with a 47-37 defeat.

Both teams were fairly even in the first half, and Whitewater only led 23-19 at halftime. However, the Whippets pulled away in the second period, outscoring Big Foot 24-18.

Courier was the top scorer for the Chiefs in the game, scoring 11 points to bring her school-record career scoring total up to 1,327.

+15 Reagan Courier through the years

Reagan Courier through the years

Big Foot senior Viola Larson goes up for a shot Feb. 25 during the team’s 60-34 playoff win over East Troy.