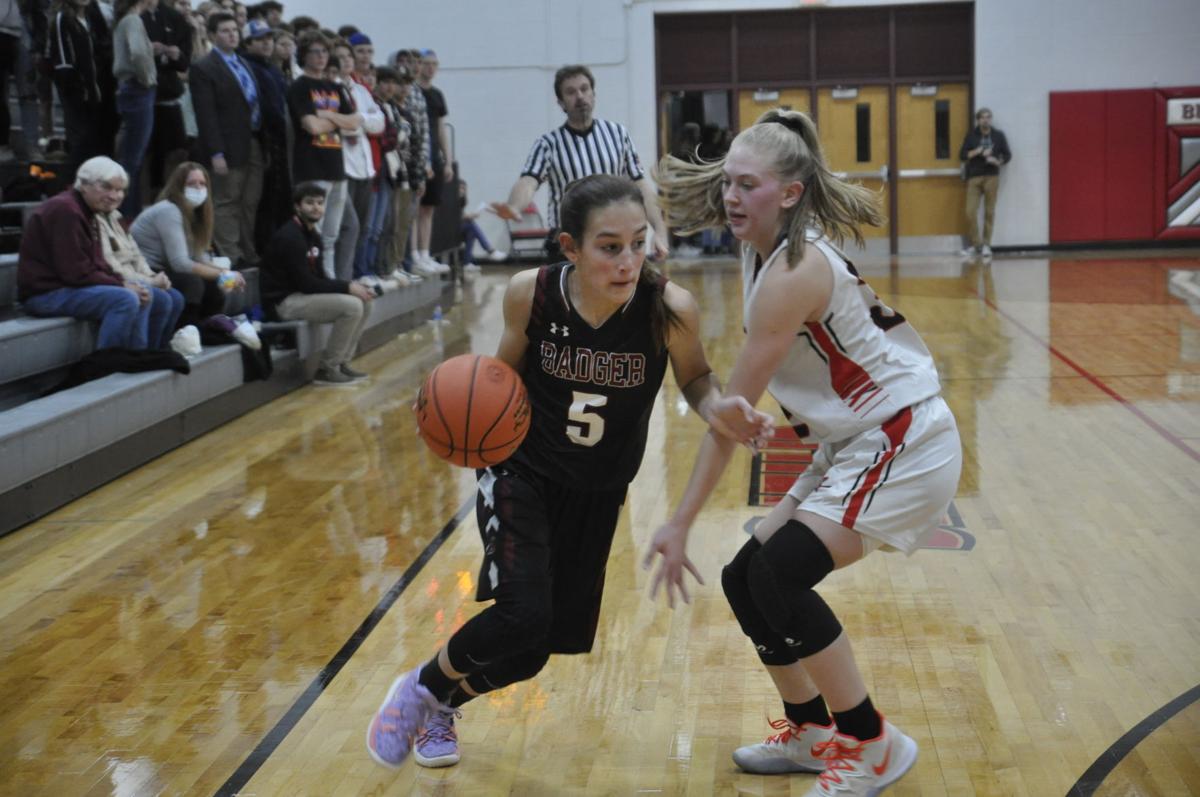 Badger freshman Payton Hayes drives around her defender in the season opening matchup against Big Foot in November at Big Foot High School. 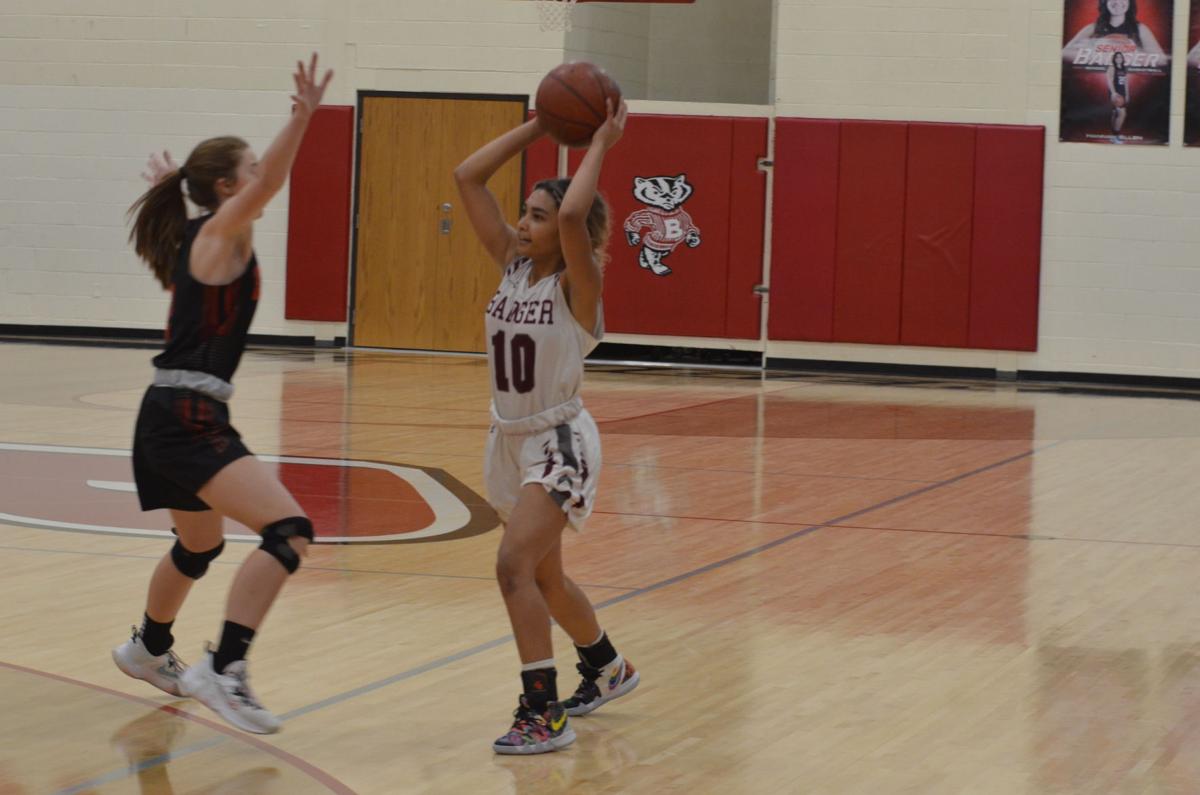 Badger senior Bella Cruz looks for a pass from in the in-conference matchup against Burlington Tuesday, Dec. 7, at Badger High School. 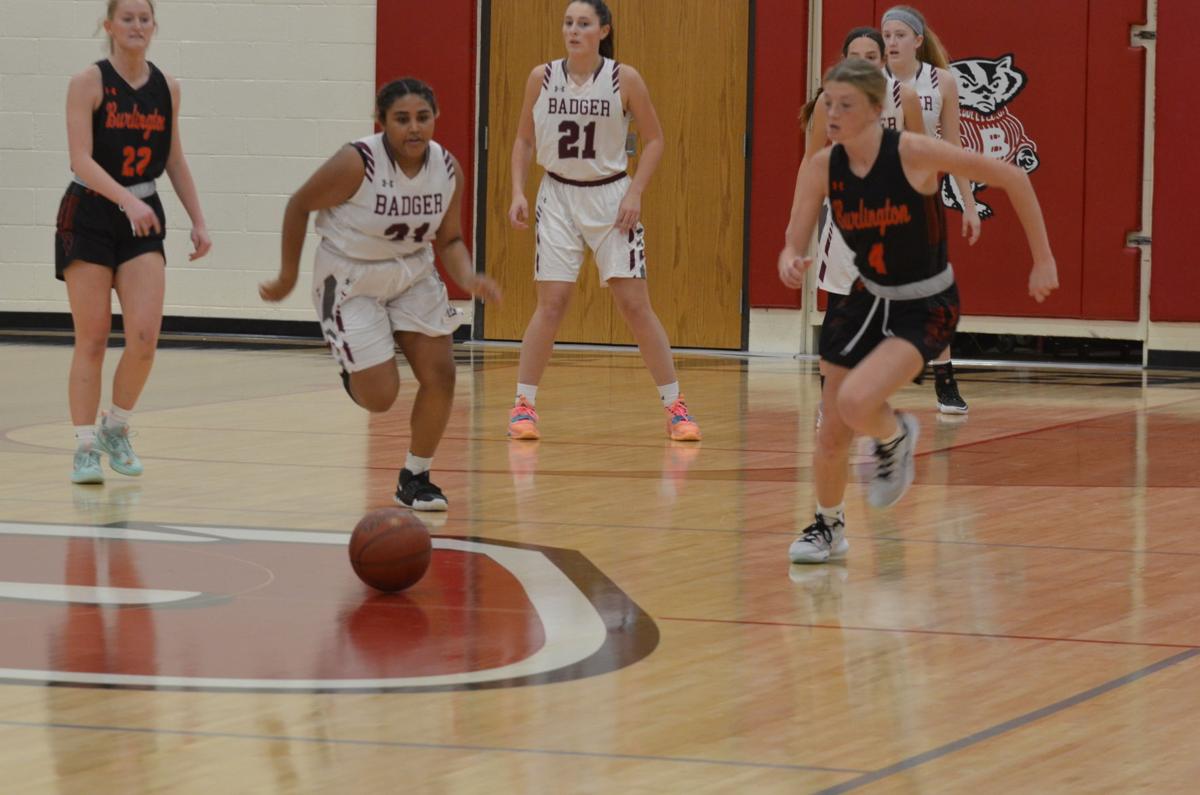 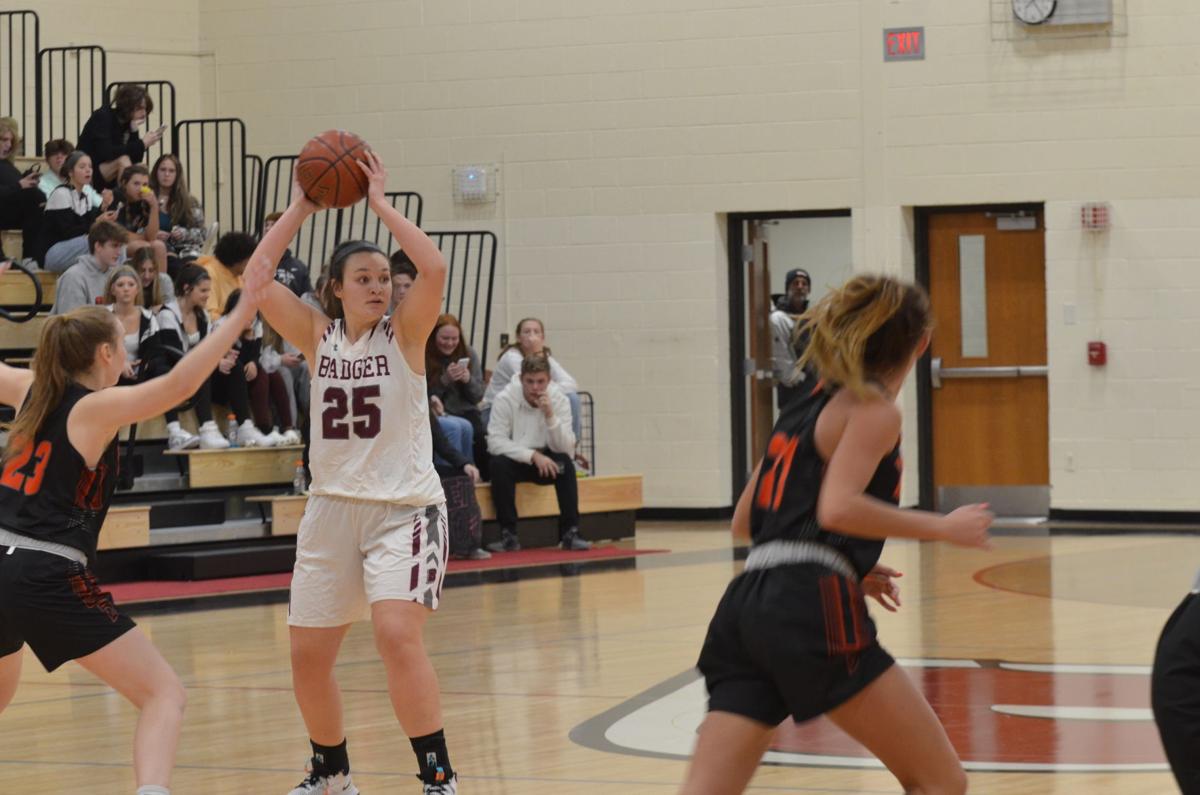 Badger senior Hannah Allen looks for a pass in the matchup against Burlington.

Eleven seniors from the Badger varsity girls basketball team from one season ago have graduated and moved on. It was a team that went 15-4 overall and finished with a 13-1 record in the Southern Lakes Conference, sealing a conference co-championship. The 2021-2022 looks very different and that includes having a new head coach on the sidelines.

Former coach David Jooss retired from his head coaching position back in March of 2021 after 12 seasons at the helm that included several conference championships.

The new head coach is Steve Deering, a 10-year veteran at Badger High School as a coach and guidance counselor, has also coached basketball at McHenry County College in Crystal Lake, Illinois, Crystal Lake Central High School and has been involved with youth coaching for nearly 17 years.

Deering added longtime Williams Bay boys head basketball coach Troy Nottestad to his staff as an assistant after he retired from the Bulldogs sideline at the end of the 2021 season after 19 seasons. Nottestad’s daughter, Ashlin, is a freshman on the team.

“He was my first phone call that I made,” he said. “I’m going to lean on him during the games. After doing it for 20 years, even though he was coaching boys, there’s probably not much he hasn’t seen. It’s great to have his calmness and experience with me on the sideline.”

“Bella brings back the experience from a conference championship team last year and she’s doing great,” Deering said. “She’s our point guard and our motor.”

Another captain is center Hannah Allen.

“She’s our team leader, our team enthusiast,” he said. “Everybody loves her. She’s great with the team, which makes her perfect for a captaincy role.”

Junior forward Devon Bland is another player who Deering expects a big year from.

“Her toughness is something we need,” he said.

Those 11 seniors from last season who have now graduated and moved on had played together since fourth grade, so trying to sustain the success the Badger girls’ basketball program has had will be a challenge. But it is certainly something Deering is up for.

“I hope we’re going to build it once again,” he said. “We are going to have to do our own thing, we can’t mimic what was done with those players.”

Macie Todd, who led the team in scoring last season with 14.7 points-per-game, is now on the track team in college at the University of Wisconsin-La Crosse. Ashlyn Welch, a three-year starter at point guard, averaged 11.0 points-per-game in her final season and was an all-state academic, conference player as a senior.

“We can’t replace them. This person is not this person anymore, but hopefully we’re going to do it as a group and a team effort,” Deering said.

Compared to last season’s team with 11 seniors, this is a much younger team. As a coach in the youth program for several years, Deering finds this opportunity exciting to be able to see the growth.

“We have some athleticism on this team that I haven’t seen in my 10 years of being a coach here at Badger,” he said. “We have 15 players at our practice and I don’t have a problem playing any of them in our games this season.”

Badger started the season with a record of 3-1 on the season and 1-0 in the Southern Lakes Conference as of Monday, Dec.6. At the time of publication, freshman Molly Deering leads the team in scoring with 10.3 points-per-game.

“We don’t have a goal, we just kind of have some standards,” Deering said. “We’re going to have fun, we’re going to be committed, and we’re going to compete. I want kids that will cheat at checkers to win the game. I need people that want to win at everything they do whether it’s an essay in English class or on the basketball court. I believe we’re getting that way.”

Badger remains hot early on in the season

Badger's girl's basketball team is off to a 3-1 start and 1-0 in the Southern Lakes Conference led by freshman leading leading scorer Molly Deering.

Troy Nottestad was born and bred a Badger.

Brawl breaks out between Cowboys, 49ers fans outside AT&T Stadium

Brawl breaks out between Cowboys, 49ers fans outside AT&T Stadium

These rare photos show Tom Brady from his baseball days

These rare photos show Tom Brady from his baseball days

Badger freshman Payton Hayes drives around her defender in the season opening matchup against Big Foot in November at Big Foot High School.

Badger senior Bella Cruz looks for a pass from in the in-conference matchup against Burlington Tuesday, Dec. 7, at Badger High School.

Badger senior Hannah Allen looks for a pass in the matchup against Burlington.