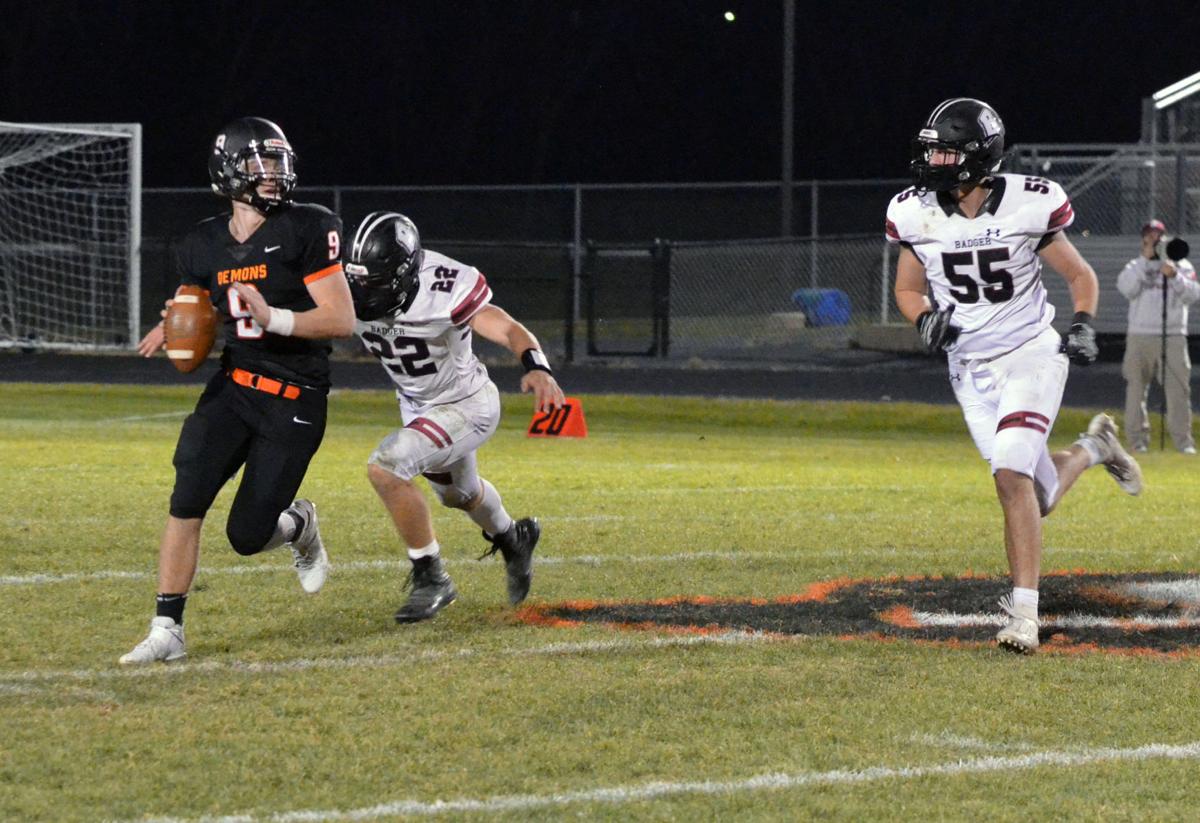 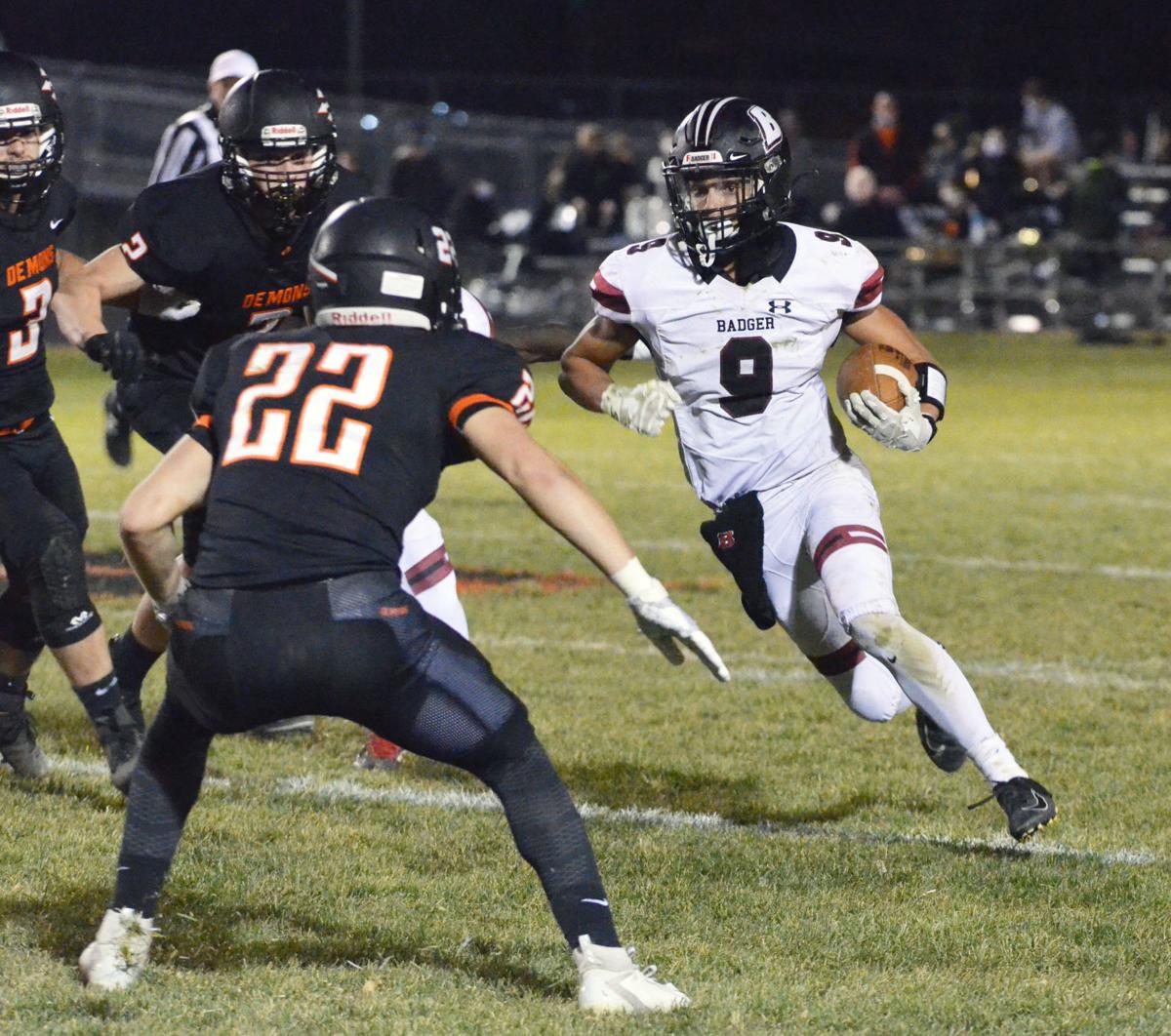 Badger running back Keegan Huber cuts into the heart of the Burlington defense during the Badgers’ 27-20 comeback victory on Nov. 6.

For the second season in a row, the Badger football team closed out the regular season with an underdog victory in a rivalry game, winning a road game in Burlington 27-20 on Oct. 6.

At the end of the 2019 season, the Badgers defeated Waterford 17-7 despite the Wolverines entering the game with an undefeated record and a No. 2 ranking among Division 2 teams.

Heading into the matchup between the Badgers and Demons, Burlington had a 4-1 record and was ranked eighth in Division 2.

Given the similarities between the two situations, head coach Matt Hensler and his staff would have been foolish to not hype up the prior season’s success to get the team ready for this fall’s rivalry game.

“If you think we didn’t bring up Waterford, you’re nuts. We absolutely did,” Hensler said with a chuckle.

Unlike the Waterford game, which the Badgers controlled for most of the contest, Badger needed a late comeback to overcome a rough start against the Demons.

Burlington received the opening kickoff and marched down the field in four minutes to score. The drive ended with a 1-yard rushing touchdown by running back Zach Wallace at the 8:12 mark.

The Badgers had a turnover on downs on their first drive, and the Demons scored again, this time with a 15-yard pass to tight end Cody Benzow to make it a 14-0 lead with 1:16 remaining in the first quarter.

Badger fumbled near midfield on the ensuing drive, and Burlington capitalized once again as Wallace punched in an eight-yard run. The Badgers blocked the extra point and Burlington led 20-0 a minute into the second quarter.

At that point, it seemed as though the game was destined to be a rout. When the Badgers were forced to punt on their next two drives, it seemed like that outcome was even more likely.

However, things began to turn around just before halftime.

With 4:25 left in the half, the Badgers forced and recovered a fumble near midfield. They moved down the field and reached the end zone for the first time when quarterback Tannor Garrels rushed for a nine-yard touchdown to make it a 20-7 deficit with 29 seconds left in the half.

With that sign of life, Garrels made sure his teammates stayed upbeat about their chances for a comeback.

“I was just trying to hype them up, you know, tell them we’re not out of it yet. There’s a lot of game left,” Garrels said.

Neither team was able to get much going when play resumed. The Badgers failed to convert on a fourth-down attempt and the Demons were forced to punt on their first drives of the half.

It looked like Badger’s second drive of the third quarter was destined for more of the same, facing a fourth-and-one on their own 19-yard line. The Demons crowded the box, but Garrels burst through the line and, with few Burlington defenders in the backfield, the Badger quarterback sprinted 81 yards for a touchdown to cut the team’s deficit to just one score at 20-14 with 2:06 remaining in the third quarter.

The quarterback said he was a bit surprised to see no defenders near him.

“I was just like ‘oh my gosh, there’s a lot of field here I can work with.’ I just tried to outrun everyone, I was really tired, but I got it done,” Garrels said.

The two teams traded punts on their next drives. Burlington got the ball early in the fourth quarter with a chance to run time off the clock.

But rather than play it safe, the Demons decided to try some razzle-dazzle. They pitched the ball to the running back Wallace, who then attempted a deep pass. His pass did not go deep enough, and Badger defensive back Jacob Needle swooped in for an interception that gave Badger the ball at the Demons’ 27-yard line.

Badger capitalized on that takeaway a few minutes later when Garrels found receiver Tyler Deleskiewicz, who tumbled into the end zone after being hit from behind to tie the score, 20-20. Burlington kept the game tied by blocking the extra point kick.

Badger forced another takeaway on the ensuing kickoff, knocking the ball loose for a fumble and recovering at the Demons 39. A few plays later, the Badgers faced a fourth-and-one situation at the 16-yard line. Once again, they picked up not just a first down, but a touchdown: running back Cole Berghorn shed several would-be tacklers for a 16-yard rushing score to put Badger ahead 27-20 with 2:19 remaining in the contest.

Shortly after Burlington got the ball back, Needle intercepted his second pass of the game, allowing the Badgers to run out the clock and seal the win.

The Badger victory snapped a three-game losing streak to their Southern Lakes Conference rivals that included a season-ending 33-7 game in the 2019 playoffs.

Besides upsetting a bitter rival, the game showed the Badgers have come from the start of the season. After starting off the year 0-2, the team went 3-1 in its final four games, the most impressive of which came in the final week of the regular season.

Hensler said he feels that the team’s improvement has less to do with any sort of adjustments he and his coaching staff made and more with how his young squad grew accustomed to the varsity football atmosphere.

“Our prep hasn’t changed; we’re just getting better,” Hensler said. “We were playing so many young guys at the beginning of the year and they’re starting to play some football.”

The team will try to keep their momentum going on Nov. 13 at 7 P.M. when they play their first playoff game of the season, hitting the road to face off against Brookfield East.

Check here for all of the Lake Geneva Regional News' coverage of the 2020 Badger and Williams Bay high school football season so far.

Badger running back Keegan Huber cuts into the heart of the Burlington defense during the Badgers’ 27-20 comeback victory on Nov. 6.