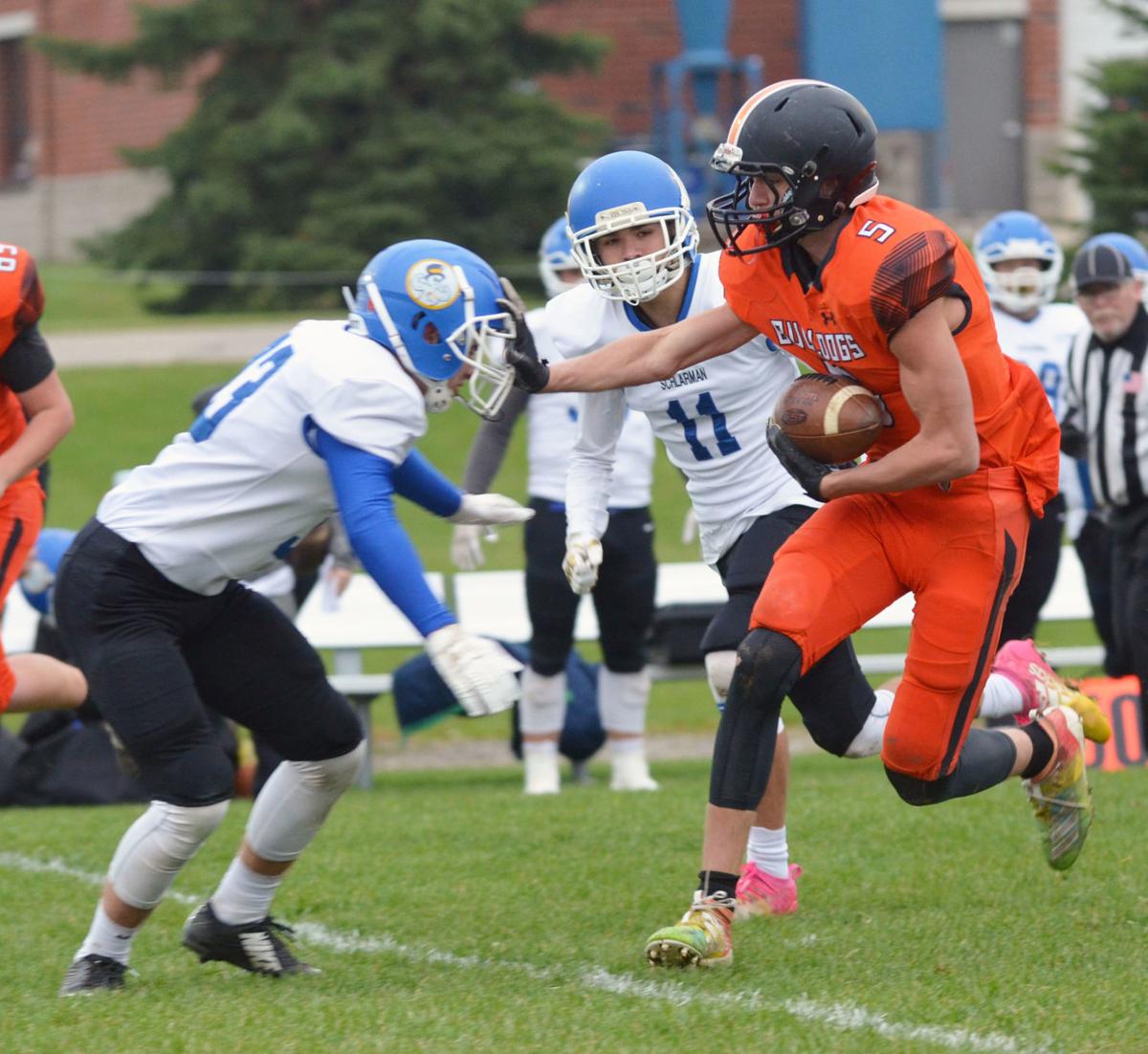 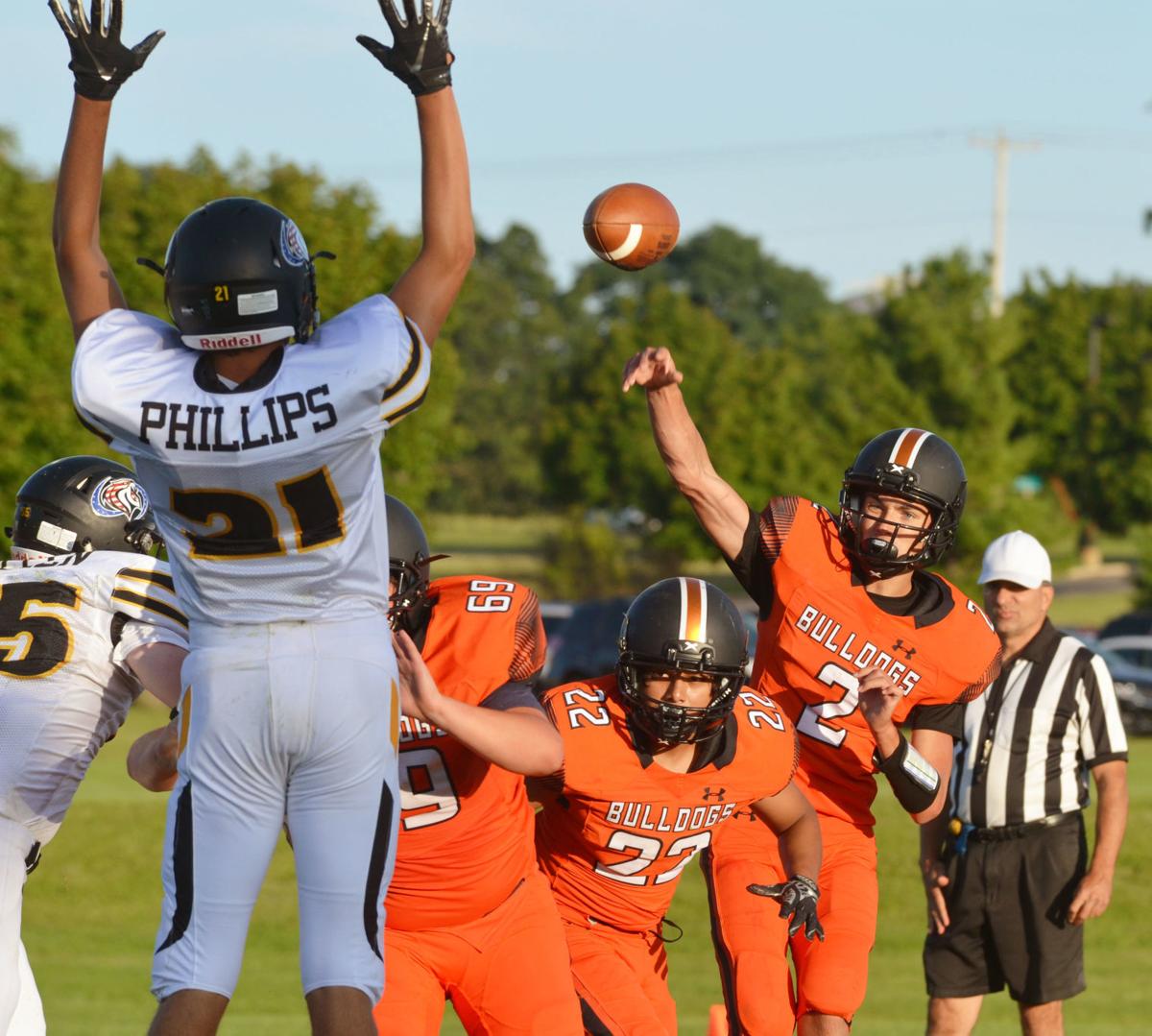 Quarterback Cole Oertel, right, will return under center next year for the Bulldogs as one of 18 returning players on a young team this season. 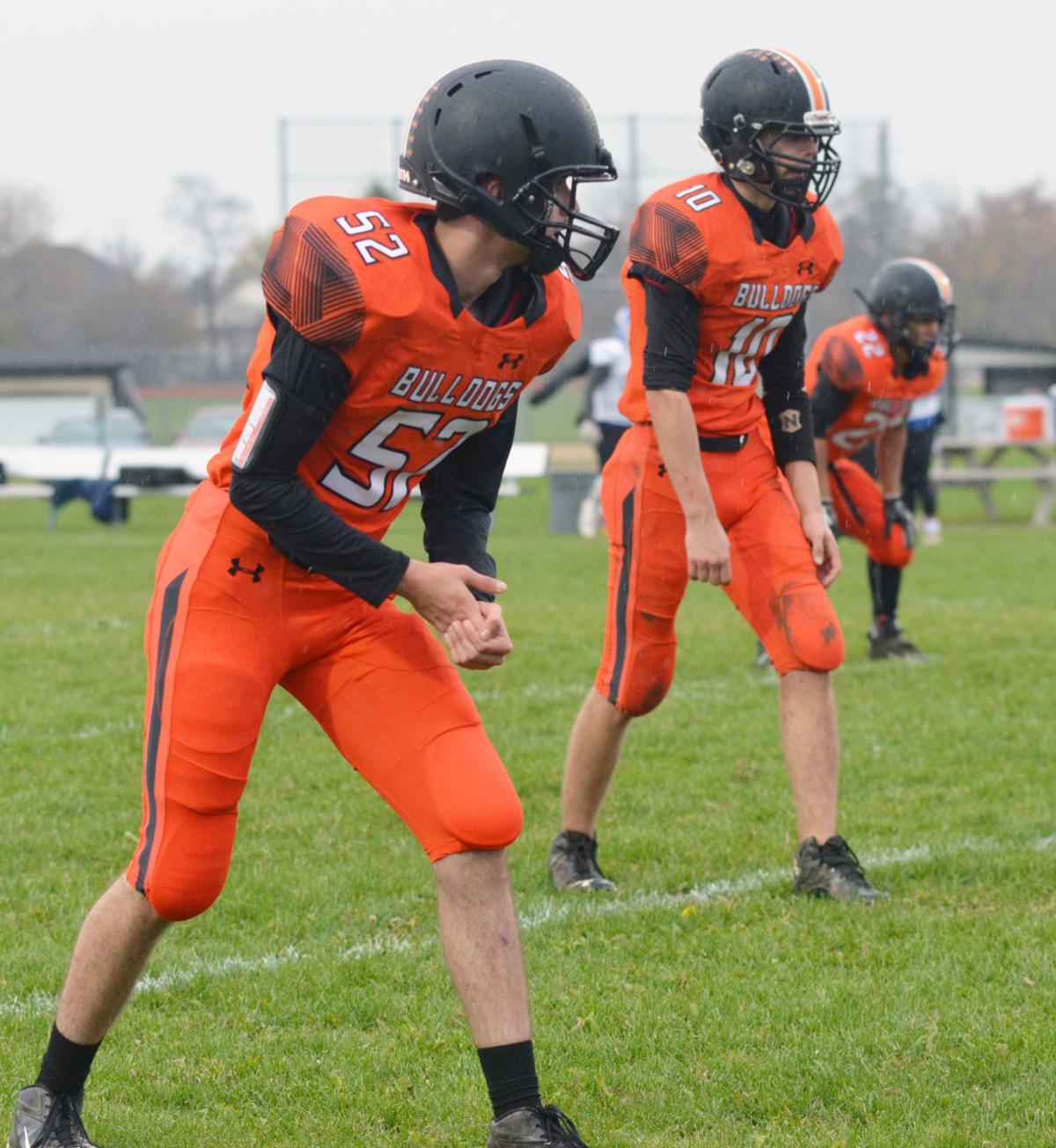 Williams Bay's only two senior football players line up next to each other during the final game of the year Oct. 26, with Ian Karcher on the left and Xavier Quiles on the right.

As such, the team had plenty of milestones to hit.

In Week 1, they had their first home game, Week 2 saw their first touchdown, and the Bulldogs won their first game in Week 8. Now that all those boxes have been checked, the Bay needs to play like it has been there and done that.

“There’s no excuses anymore, not that I was big into excuses to begin with. We’re a varsity program, and now it’s not anything new and earth-shattering,” head coach Jon Tomaszewski said.

While the 1-9 record was not quite what the players and coaches wanted, for a program that lacked experience, getting games under their belt was the most important part of the season.

“Now we know what to expect, and next year we can build off this year,” junior receiver Jake Oertel said.

After two years of junior-varsity eight-man football, the Bulldogs players had a bit of history playing the sport. But transitioning to the varsity level proved challenging. With an increase in intensity, size and athleticism of their opponents, it took a bit for the Bulldogs to get their feet under them.

With their first game of the year coming against reigning Iowa state champion New London, Williams Bay took its lumps early in a 60-0 shutout. While the results did not get better in the win-loss column until Week 8, the Dogs improved statistically throughout that losing streak, including a couple of close calls where the team could not quite hold on to late leads.

Beyond just the box scores, the team saw tremendous growth in both skills and knowledge by the end of the year, particularly on the offensive line.

To see that growth manifest itself with a 46-8 win over Aldon-Hebron in Week 8 gave the team a morale boost that could play a role in driving the team forward through the offseason and into next year.

“I’d say getting our win this year was definitely paramount to our confidence,” sophomore quarterback Cole Oertel said.

In this first varsity season, inexperience was a definite weakness for the Bulldogs. With only two seniors graduating from this team, and the remaining 18 players back, the script will be flipped next year as Williams Bay comes back as an experienced unit.

The players and coaches hope that the extra year of training and bonding will give their record a boost.

“I think our chemistry has definitely developed, and I think it will continue to develop through next year,” Cole Oertel said.

Regardless of the fact that the team’s record was not as strong as they hoped, just having a team again for the first time in four years was a big boost to Williams Bay High School’s athletic department. And the community rallied around the team.

“Even though it wasn’t a very good season in my opinion, people were still out there supporting us,” Jake Oertel said.

“I think the pride was definitely there,” added Cole Oertel, his brother.

More than just bringing the fans back into the stands, Tomaszewski believes that the fact that the team played through the season will serve as a major recruiting tool for future years.

“I think the biggest part was offering some credibility to it. This was the first year, people thought, ‘Are they going to survive, are they going to make it through?” Tomaszewski said. “Having competitive games there at the end, and not everything being a blowout, definitely helped the cause.”

The increased attention already showed itself during the year, as four new players joined after the season began, growing the roster size from 16 to 20.

Whether a plethora of new faces join up or the team sticks with just its 18 returning players, the first offseason as a varsity program will be a critical juncture for the Bulldogs. Early in the year, Williams Bay got pushed around by teams that were stronger and faster than they were, and the easiest way to narrow that game is by a disciplined weight room regimen, or by playing other sports to become a more versatile athlete.

“I was a huge advocate that these guys need to play another sport or need to be in the weight room. No just going home after school and sitting around,” Tomaszewski said. “Our big motto toward the end of the year was taking steps forward. And this is another step in the offseason.”

Quarterback Cole Oertel, right, will return under center next year for the Bulldogs as one of 18 returning players on a young team this season.

Williams Bay's only two senior football players line up next to each other during the final game of the year Oct. 26, with Ian Karcher on the left and Xavier Quiles on the right.