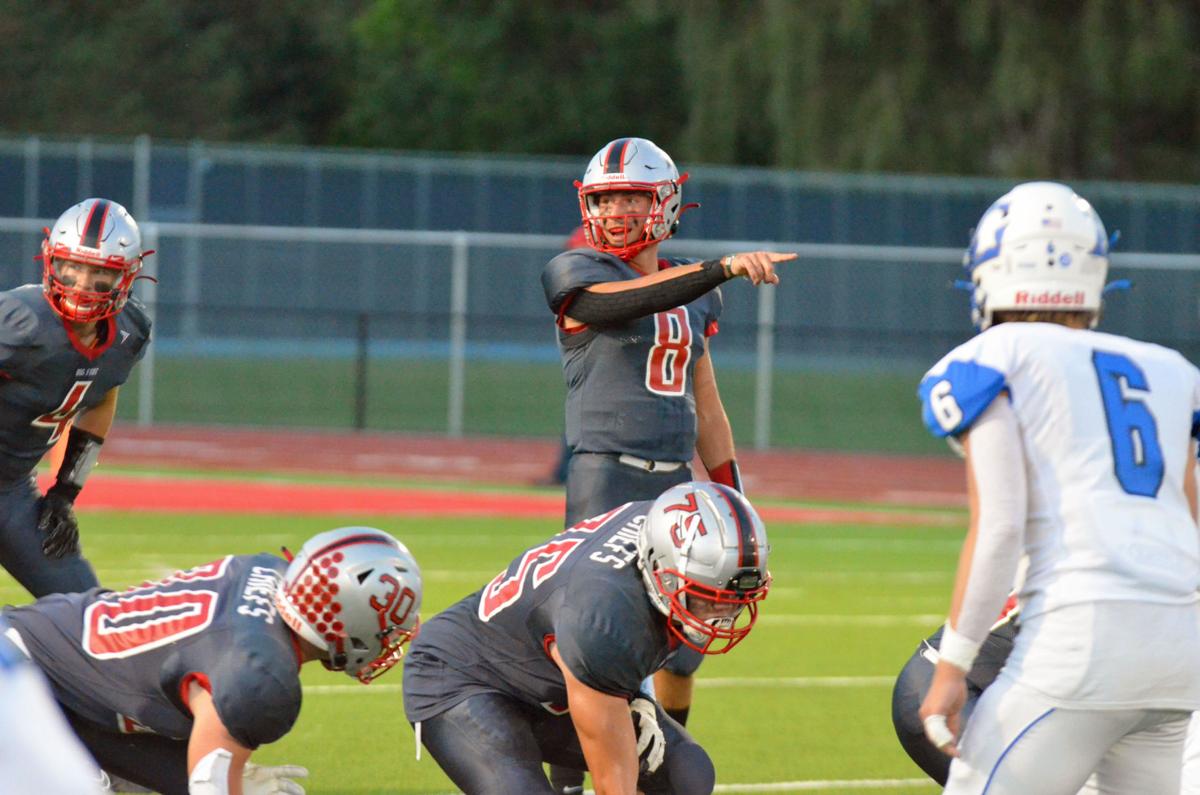 Big Foot quarterback Basil Demco calls out a play at the line of scrimmage during the Chiefs’ Sept. 10 loss to Lodi. 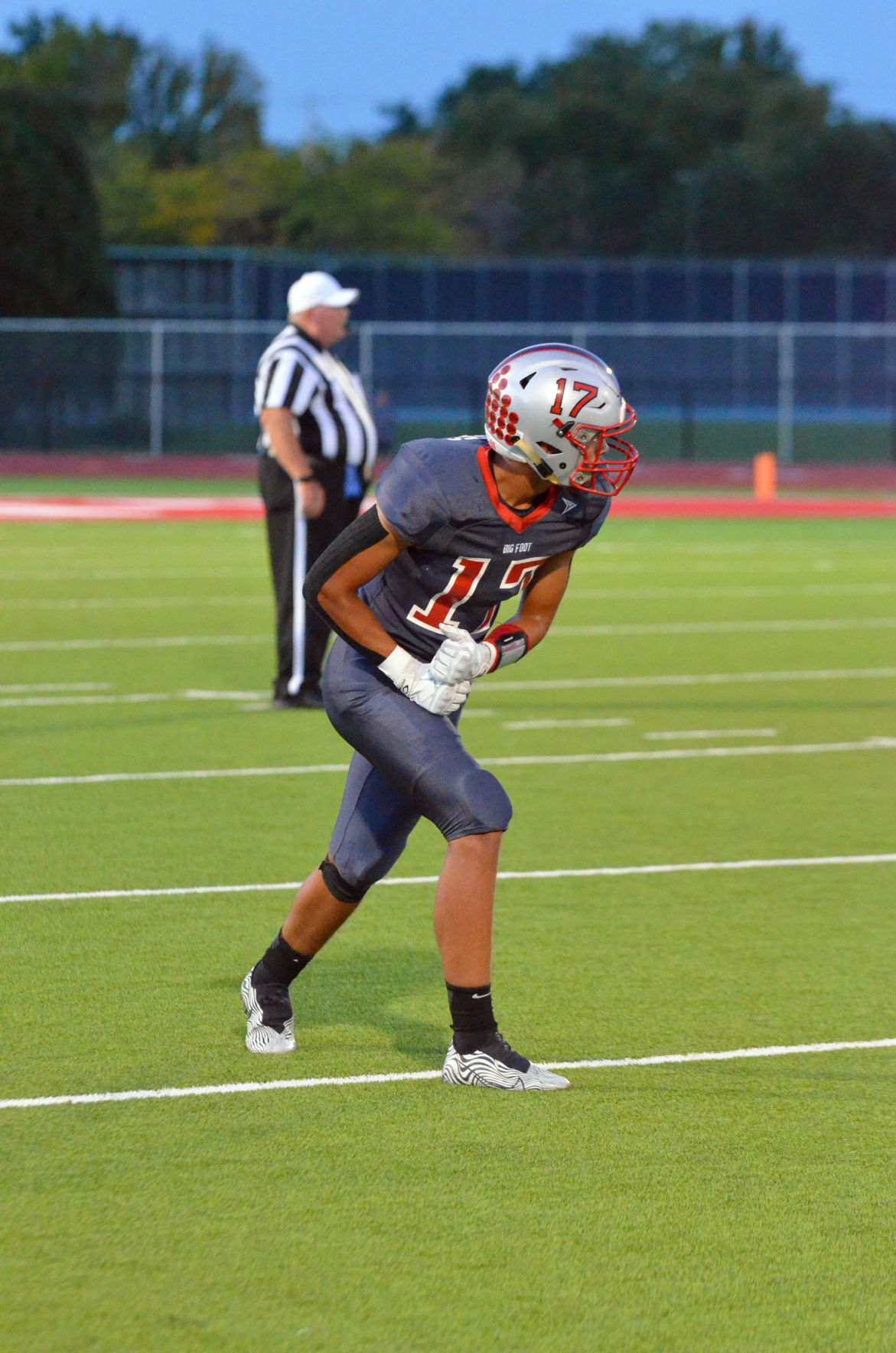 Big Foot receiver Alex Schmitz gets in a ready stance before a play in Big Foot’s Sept. 10 home loss to Lodi.

WALWORTH — The Big Foot football team has a tough schedule loaded with talented teams, but their Sept. 10 game may have been against the toughest of them all as they hosted Capitol Conference foe Lodi.

The Blue Devils went 3-0 in their first three games, outscoring their opponents by a 120-0 margin and earning a third-place ranking in the Wisconsin Football Coaches Association poll.

While the Chiefs hung tough for much of the game, the talent discrepancy between the two teams was evident in the fourth quarter as Lodi pulled away for a 38-6 victory.

“Some of their all-state caliber players really came to play in the second half. Their D-line and O-line really stepped up,” head coach Mike Welden said.

On the game’s opening drive, Lodi moved the ball well but came up empty after missing a 37-yard field goal.

Big Foot responded well, moving down the field and drawing first blood with a 29-yard touchdown run by junior running back Jax Hertel. Lodi blocked the extra point, though and kept the Chiefs’ lead to 6-0 at 2:56 in the first quarter.

It took just 24 seconds for the Blue Devils to jump into the lead as running back Jaylen Montgomery shook a few BFHS tacklers and ran for a 42-yard touchdown for a 7-6 advantage.

The Chiefs had another strong drive developing, moving down the field into the red zone, though a series of penalties and miscommunications pushed them back into a fourth-down-and-30 situation that they were not able to convert.

Lodi chewed nearly eight minutes off the clock with their next drive, scoring on a seven-yard pass from quarterback Keegan Fleischman to receiver Erik Lincoln for a 14-6 score with 1:32 remaining in the half.

Not only would that score hold until the end of the second quarter, it held throughout a scoreless third quarter, and Big Foot had a chance at an upset heading into the final quarter.

The dramatics were not meant to be, though, as Montgomery scored a 12-yard touchdown on the first play of the fourth quarter for a 21-6 lead.

Big Foot’s next drive ended in an interception, then the Chiefs failed to convert on a fourth-down attempt, then their third possession of the quarter ended in a punt.

Meanwhile, Lodi got points on each drive with two touchdowns and a field goal to cap off the 32-point victory.

Hertel was Big Foot’s leading offensive player, rushing 17 times for 102 yards and the team’s only score.

It was a tough game for the Chiefs’ passing attack as senior quarterback Basil Demco went 4-for-14 for 34 yards and three interceptions, with the stellar disruption abilities of Lodi’s defensive line to blame. Demco also added 53 yards on 10 rushes.

Despite the lopsided final score, Welden felt his team played well and just faced a more talented team that also played a good game. Nonetheless, by keeping it close until the final quarter, it shows that the gap between the Chiefs and the state’s best may not be as wide as some think.

“I think we’re closer than that score represents,” Welden said.

When Waterford and Badger meet up on the football field, there is a bit of extra energy compared to a typical game.

Big Foot falls to one of state's best, plus scores from Badger and Williams Bay

WALWORTH — Big Foot had a tall task when Lodi came to town Friday night, and while the Chiefs hung tough, the Blue Devils were too much to han…

Badger got the better of archrival Waterford on Friday night, defeating the visiting Wolverines 42-25 in Lake Geneva.

When coronavirus precautions shook up the football season in 2020, it delayed Big Foot’s switch to the Capitol Conference until this fall.

Big Foot quarterback Basil Demco calls out a play at the line of scrimmage during the Chiefs’ Sept. 10 loss to Lodi.

Big Foot receiver Alex Schmitz gets in a ready stance before a play in Big Foot’s Sept. 10 home loss to Lodi.