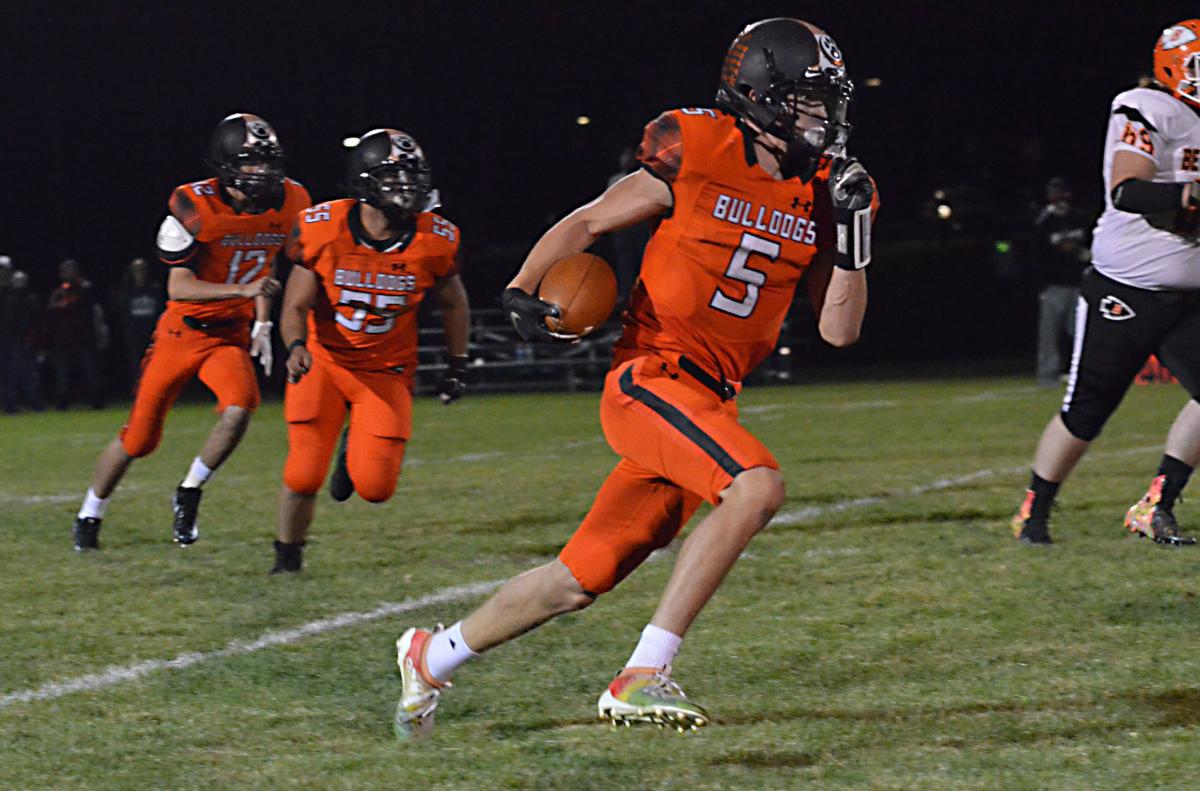 Receiver Jake Oertel sprints upfield with the ball during the Williams Bay homecoming game on Oct. 9. 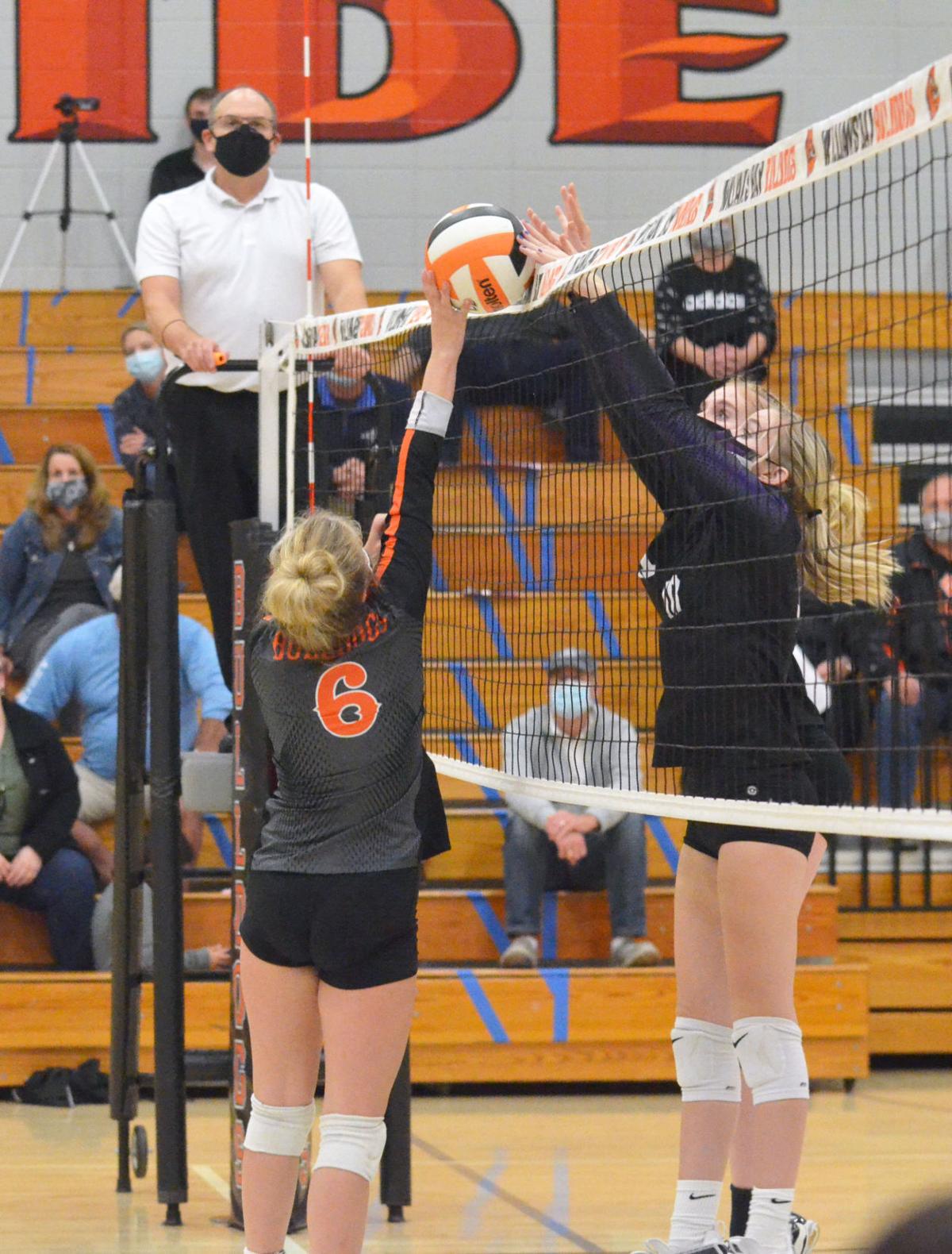 Williams Bay’s Bryn Shea, left, tries to get the ball over the net as Palmyra-Eagle opponents block her shot in a Sept. 28 contest. 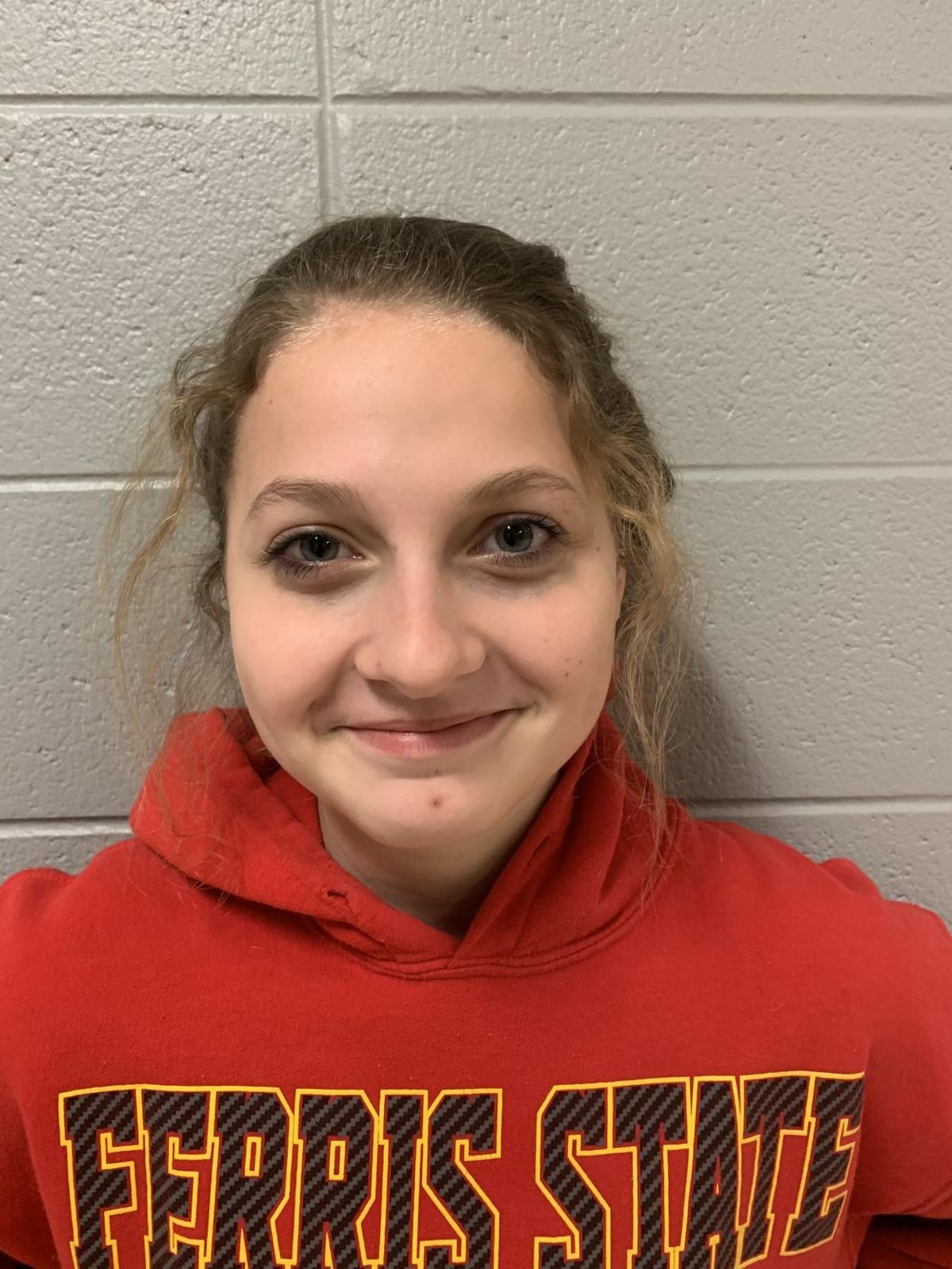 Despite an atypical fall sports season, nine Williams Bay athletes were able to earn all-conference accolades for their performance on the field and the court.

Williams Bay’s eight-man football team was not able to pick up a win this season, but four players were able to earn Southern Conference all-conference acknowledgement, including two players that made all-conference on both offense and defense.

Senior Jake Oertel and junior Aiden Hoover each earned all-conference honors for their roles on offense and defense.

Oertel made the offensive first team after catching 28 passes for 328 yards and four touchdowns as the Bulldogs’ top receiver. Defensively, Oertel earned recognition on the second team as a linebacker, for a season in which he led the team with 36 tackles, and picked up a sack and an interception.

This marks the second season in a row that Oertel made all-conference after being named an honorable mention in the 2019 season.

Hoover also earned all-conference as a receiver, making the second team for his stat line of 17 catches for 267 yards and two touchdowns. The junior bumped it up a notch, being a unanimous choice for the defensive first team for his season as a lockdown presence on defense, ending the year with four interceptions to his name. This is the first time Hoover has earned all-conference in his career.

Two more Bulldogs made the list on the offensive side of the ball alone, as seniors R.J. Pollak and Raul Rojas both earned their first all-conference honors.

Pollak was a stellar offensive lineman the past two seasons for the Bulldogs, and his play caught the eye of Williams Bay’s Southern Conference foes, earning him a unanimous selection to the first team.

Rojas was the Bay’s best running back, running for 137 yards and a pair of touchdowns during the season as he made his way onto the all-conference second team.

With three of those all-conference players departing after the 2020 season, there will be big shoes to fill in the Bay next fall.

It was a tough season for the Williams Bay volleyball team, which ended the year with a 2-8 record, but five players were named to the Trailways Conference south division’s all-conference teams, with all five making all-conference for the first time in their career.

A pair of sophomores made the first team, with Bridget Higgins and Margaret Higgins both earning the honor.

Bridget Higgins filled a spot on the all-conference list for her role as the Bulldogs’ middle hitter. As an important part of the WBHS defense, Higgins led the team in total blocks with 14, while also being a strong offensive player, ranking second on the team with 36 kills.

Margaret Higgins served as a well-rounded outside hitter for the Bulldogs, ranking near the top of every statistical category, placing fourth in kills, fifth in service aces, fourth in blocks, third in digs and fourth in serve receptions.

Sandstrom was the team’s libero, and she was a key part of the back-row defense for the Bulldogs, racking up 121 serve receptions to lead the team and finishing second on the team with 57 digs. The senior also picked up 21 service aces, which was good for second on the squad.

Fellow senior Shea was the team’s setter, and as such the offense ran almost entirely through her hands, notching 156 assists out of the team’s 167 total on the season. Shea also had a strong serving game, ranking first on the team with 24 aces.

Hamberg played outside hitter for the Bay, and she was the team’s go-to attacker, leading the way with 46 kills. Defensively, she also led the team in digs with 58 and finished second in serves received with 83.

With three all-conference players returning next year, the future is bright for the Bulldogs.

With basketball practices getting started this week, and games coming soon too, it will not be long before high school basketball fans across …

Bradford, Tremper and Indian Trail will have to wait until the new year for their winter sports seasons to get fully underway.

Badger’s swimming program has produced plenty of talented teams over the past few years, with conference and sectional titles lining the troph…

Column: WIAA's football playoff system has its share of flaws

After months of discussions, delays and then eventually some games, the high school football season is finally nearing its conclusion.

This year's football playoffs will be different than in years past, with no champion being crowned at the season's end.

Badger’s football season came to a close in the first round of the playoffs, losing a road game 20-13 to Brookfield East.

Badger, Big Foot and Williams Bay will all be participating in the winter sports seasons starting on Nov. 16.

The Badger football team lost by the narrowest of margins in a 34-33 defeat on the road against Elkhorn on Oct. 30.

Start of the second half for Badger vs Brookfield East

Receiver Jake Oertel sprints upfield with the ball during the Williams Bay homecoming game on Oct. 9.

Williams Bay’s Bryn Shea, left, tries to get the ball over the net as Palmyra-Eagle opponents block her shot in a Sept. 28 contest.