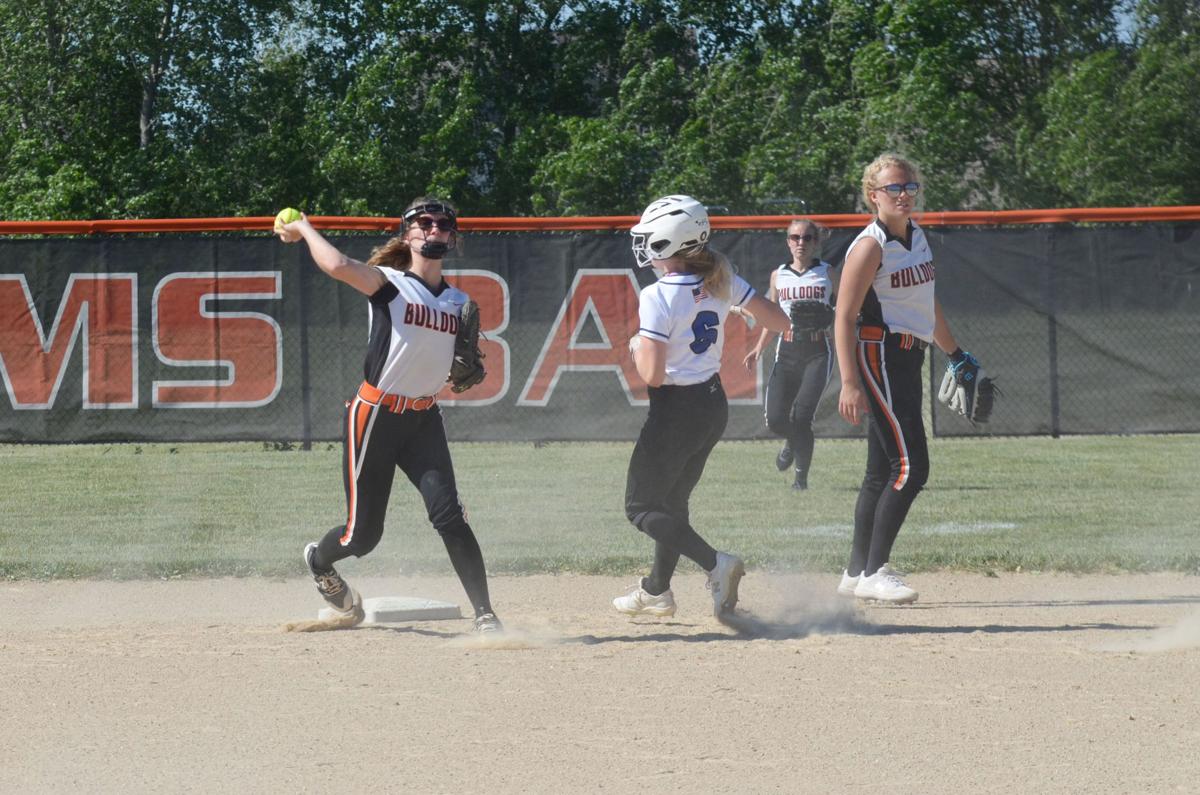 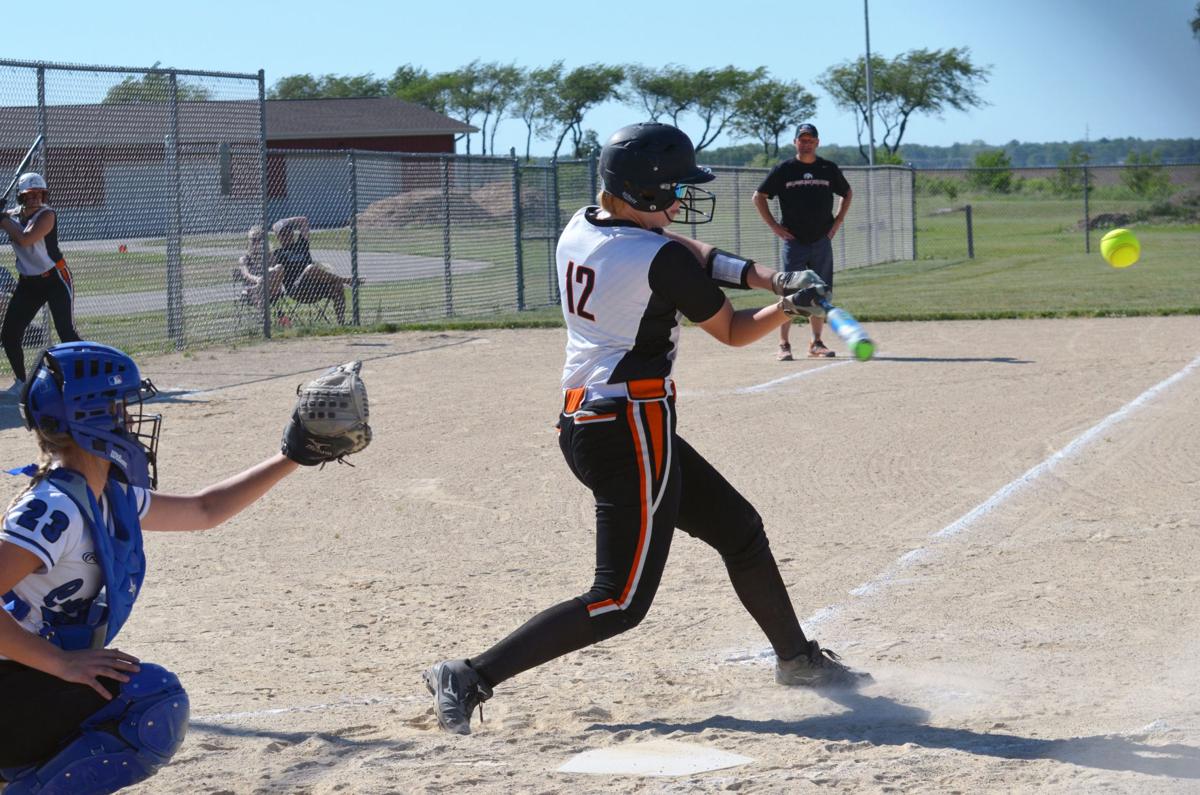 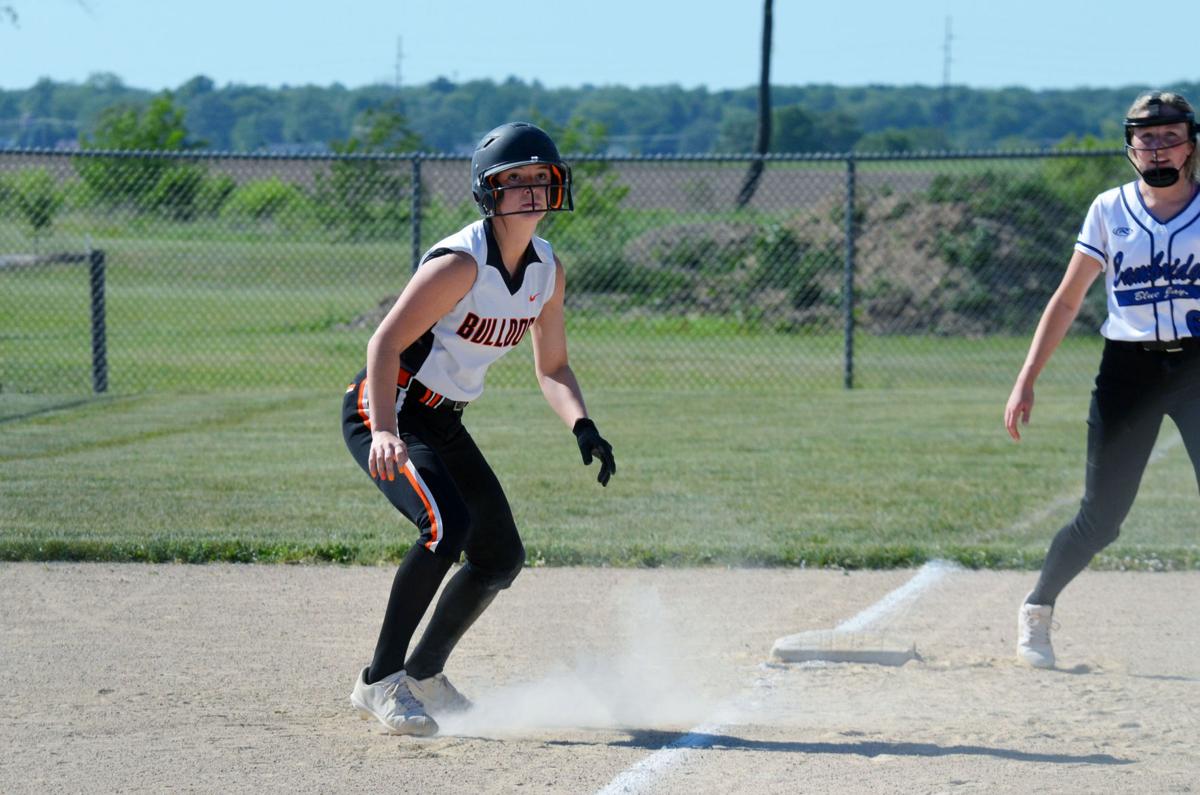 Williams Bay Junior Emily Gauger keeps her eye on a fly ball while leading off third base in the Bulldogs’ 17-7 loss against Cambridge on June 4.

The Bay hung tough for the first few innings, but the Blue Jays pulled away late in a 17-7 victory.

“They’re a quality team, we went toe-to-toe with them for five innings. Proud of the girls for the way they battled,” head coach Jeff Kuespert said.

It was the Bulldogs that got on the board first, scoring a pair of runs in the bottom of the first inning for a 2-0 lead.

The team’s first run was the result of savvy base running as sophomore Evelyn Hamberg stole second base, which baited a throw that allowed junior Emily Gauger to score from third base. Hamberg then scored when senior Austyn Hartwig hit a single in the same at-bat that featured the nifty base running trick.

Cambridge fought back in the top of the second inning, scoring thanks to an even mixture of walks and hits, taking a 4-2 lead.

That advantage was short-lived, however, as Williams Bay scored four runs of their own in the bottom of the frame for a 6-4 lead.

Hartwig had a ground-rule double that scored senior Meg Sorenson to start the damage, then Hamberg drove in Gauger with a bloop double to left field to tie the game. Senior Nettie Dellheim then laid down a sacrifice bunt to score Hartwig, and senior Annika Olson knocked in Hamberg with a single to finish the scoring.

The see-saw scoring continued in the third inning as the Blue Jays tied the score 6-6. In the fourth frame, each team scored a run for a 7-7 tie heading into the fifth.

While the Bulldogs were still firmly in the game at that point, cracks had begun to show as defensive errors contributed to the three runs that Cambridge scored in the third and fourth innings.

Sure enough, those defensive struggles continued throughout the game as Cambridge scored two runs in both the fifth and sixth innings, then six runs in the seventh to turn what was a tie game just past the halfway point into a 10-run victory.

Defensive miscues are always costly, but coming in quick succession against a tough opponent is a death knell.

“There was a couple innings where we gave them six outs and you can’t do that against anybody, let alone a pretty good team,” Kuespert said.

Following the loss, the Bulldogs had a three-day break to rest up before getting back to practice to prepare for a June 9 home first-round playoff matchup against Kenosha Christian Life, with the Bulldogs earning an 8-seed and Kenosha being the bracket’s 9-seed.

Williams Bay’s softball team was the only local squad to pick up a win this past week, with Badger and Big Foot losing a combined 10 game.

Big Foot and Williams Bay’s softball teams both played 5-4 games on May 25, with the Bulldogs winning against Fall River and the Chiefs losing…

Williams Bay Junior Emily Gauger keeps her eye on a fly ball while leading off third base in the Bulldogs’ 17-7 loss against Cambridge on June 4.