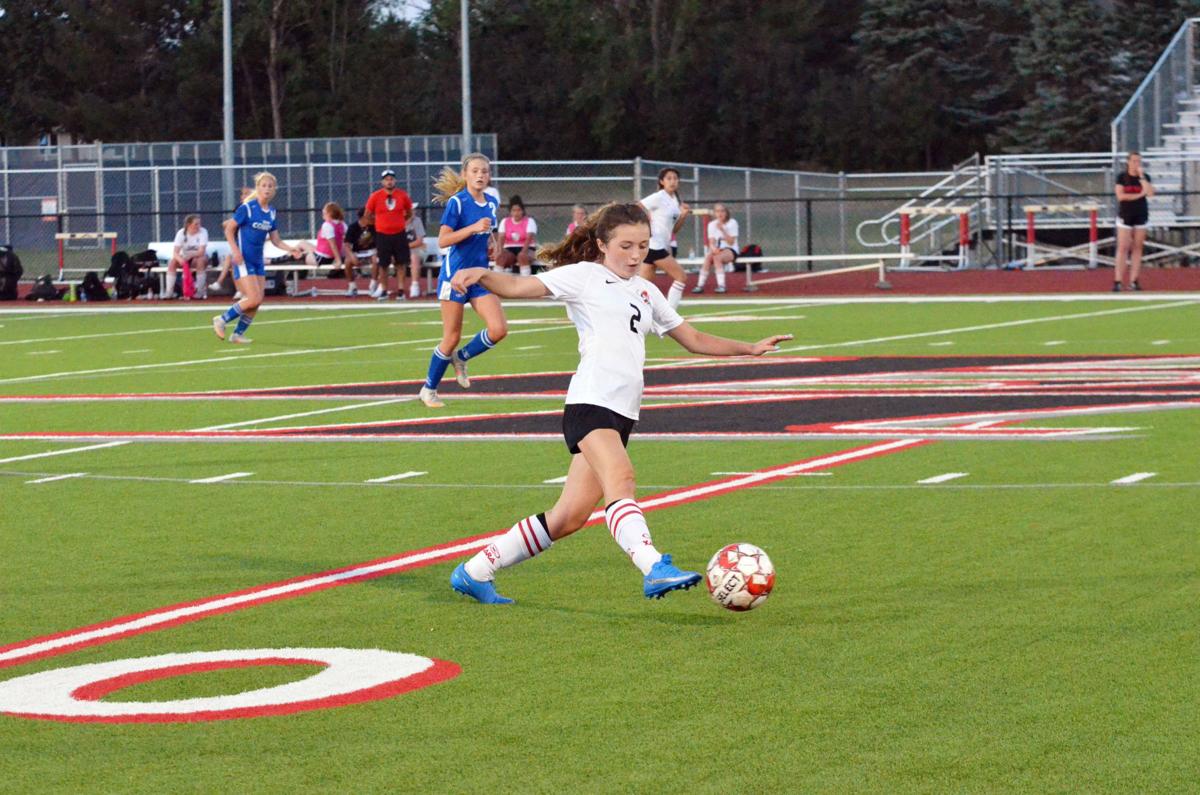 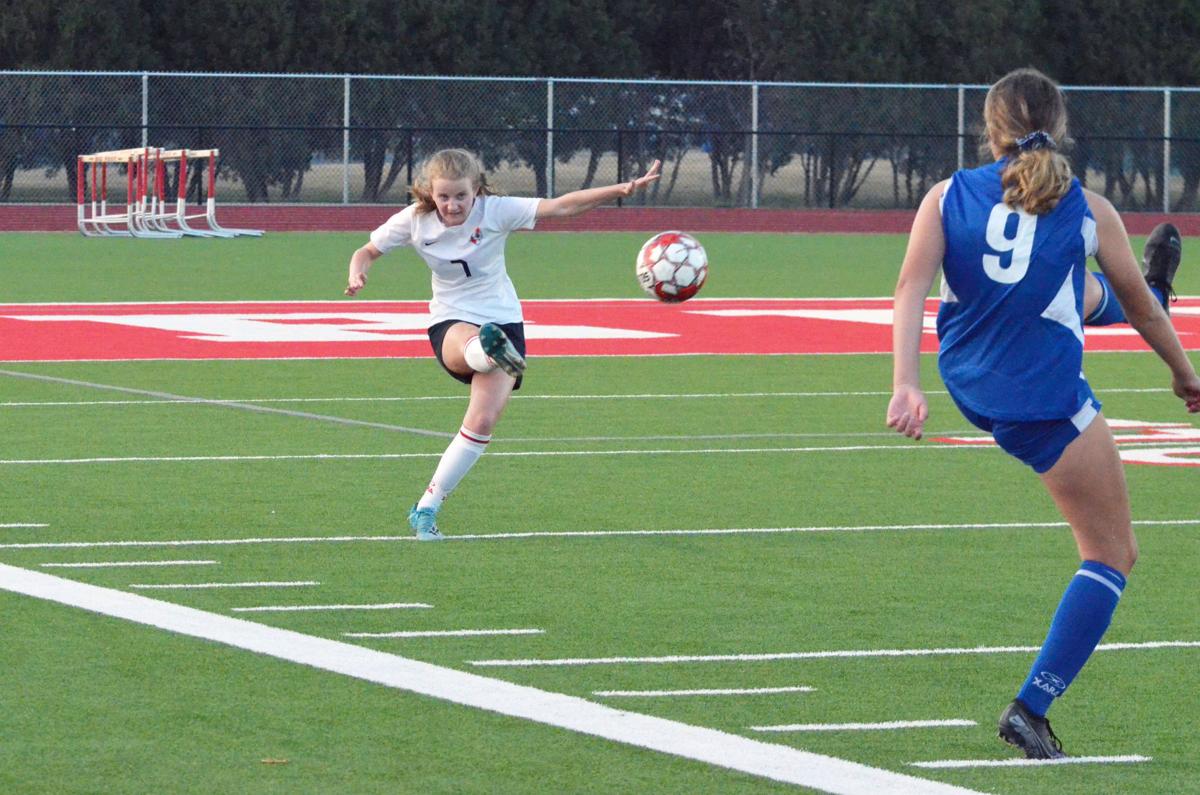 Big Foot/Williams Bay sophomore Hannah Abram clears the ball out of the defensive zone with a powerful kick against Delavan-Darien on June 10.

WALWORTH — Big Foot/Williams Bay’s girls soccer team saw its season come to an end on June 10, but the mood on the team’s bench after the game was more positive than that result would suggest.

While the six-seed ChiefDogs lost a 3-1 overtime first-round playoff game against three-seed Delavan-Darien, the contest was proof of just how much the BFWB team had gotten better throughout the season.

The postseason game was not the first time the two teams faced off this season, with the Comets winning 4-0 over the Big Foot/Bay on May 19.

Just under a month later, the ChiefDogs added one goal and held Delavan-Darien to three fewer in regulation time thanks to a more aggressive attitude that came from the additional weeks of experience.

“Then, we were younger and a little more timid. Today, we played a lot better on the 50/50 balls and being a little more vocal,” head coach Rene Perez.

That added aggression was on display from the start, as the ChiefDogs put pressure on the Comets defense in the game’s opening minute, leading to enough contact to draw a whistle for a free kick just outside the penalty area.

Sophomore Leeza Patterson took the kick, and the ball ricocheted off the goalpost into the back of the net to give BFWB a 1-0 lead just a minute and a half into the game.

Patterson has come on strong late in the season, scoring four goals in the team’s final regular season game and netting the only score of the playoff game. A talented overall athlete, Patterson won a state championship as part of the Wilmot/Union Grove/Williams Bay gymnastics team and as she got more polished on the soccer field, that athletic ability was able to shine through.

“She’s got the speed, we just need to build more on the technical aspects. She’s got two more years to go, excited for her,” Perez said.

It did not take Delavan-Darien too long to respond, with freshman Brooke O’Grady scoring in the 14th minute on a high free kick just over the outstretched hand of BFWB junior goalkeeper Lindsey McIntyre for a 1-1 tie.

With a pair of goals before the game was even one-sixth of the way done, it seemed as though it was set to be a shootout.

Instead, the two defenses clamped down and finished out the final 76 minutes of regulation time in scoreless fashion.

The closest either team came to scoring was in the 83rd minute when Patterson hit a crisp crossing pass to senior Sariah Tracy, who hit a one-timer on the net, but DD junior goalkeeper Maria Shackett made a stellar save to keep the tie alive.

Once the overtime period began, the Comets flipped a switch.

In the fifth minute, O’Grady scored on another free kick, yet again perfectly placing the ball above the stretching arm of McIntyre. One minute later, freshman Mayline Reynoso scored on a rocket shot from just outside the penalty area to put Delavan-Darien up 3-1 and put the game out of reach.

With only three seniors on the ChiefDogs roster, the future is bright in Walworth despite the season ending earlier than the players and coaches hoped.

“We played well, improved, we’ve just got to get a bit better,” Perez said. “I’m very happy where we were then to now.”

The Badgers’ season also came to an end on June 8, losing a 7-0 road game against Mukwonago in the first playoff round.

The Badger track team will be well represented at the state meet.

If a track team has a good year, they might see one school record broken over the course of the season. In a great year, there might be two ne…

The Badger High School track and field program has seen plenty of individual successes over the past few seasons, but Southern Lakes Conferenc…

The Badger boys and girls track teams fared well at their regional meet on June 14, hosting the event and seeing a number of athletes advance …

For the first time in nearly two decades, the Williams Bay High School athletic department will have a new face in charge when the 2021-22 sch…

Both the Badger and Big Foot/Williams Bay boys tennis teams saw their seasons end in the sectional round, with the four Badger flights and thr…

In the first round of the baseball playoffs on June 10, Big Foot survived and advanced while Williams Bay was eliminated.

The state streak is over for the Badger boys golf team.

Big Foot/Williams Bay sophomore Hannah Abram clears the ball out of the defensive zone with a powerful kick against Delavan-Darien on June 10.