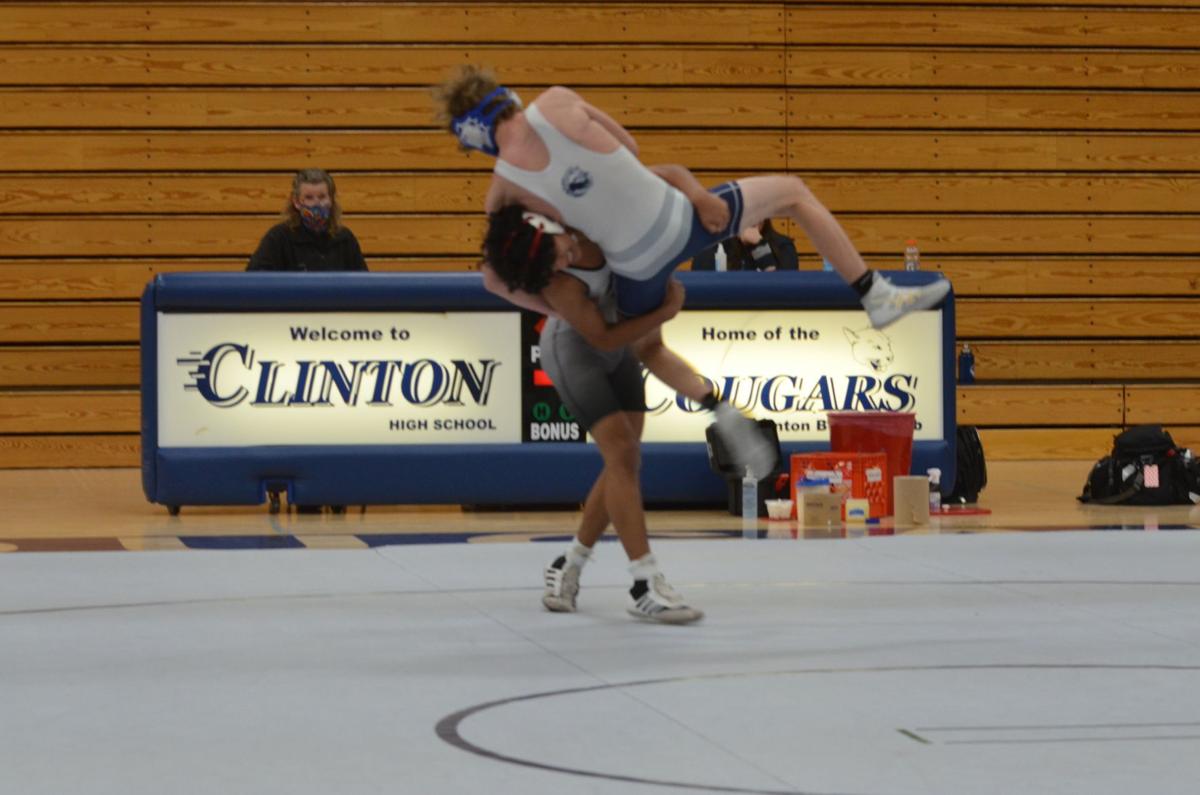 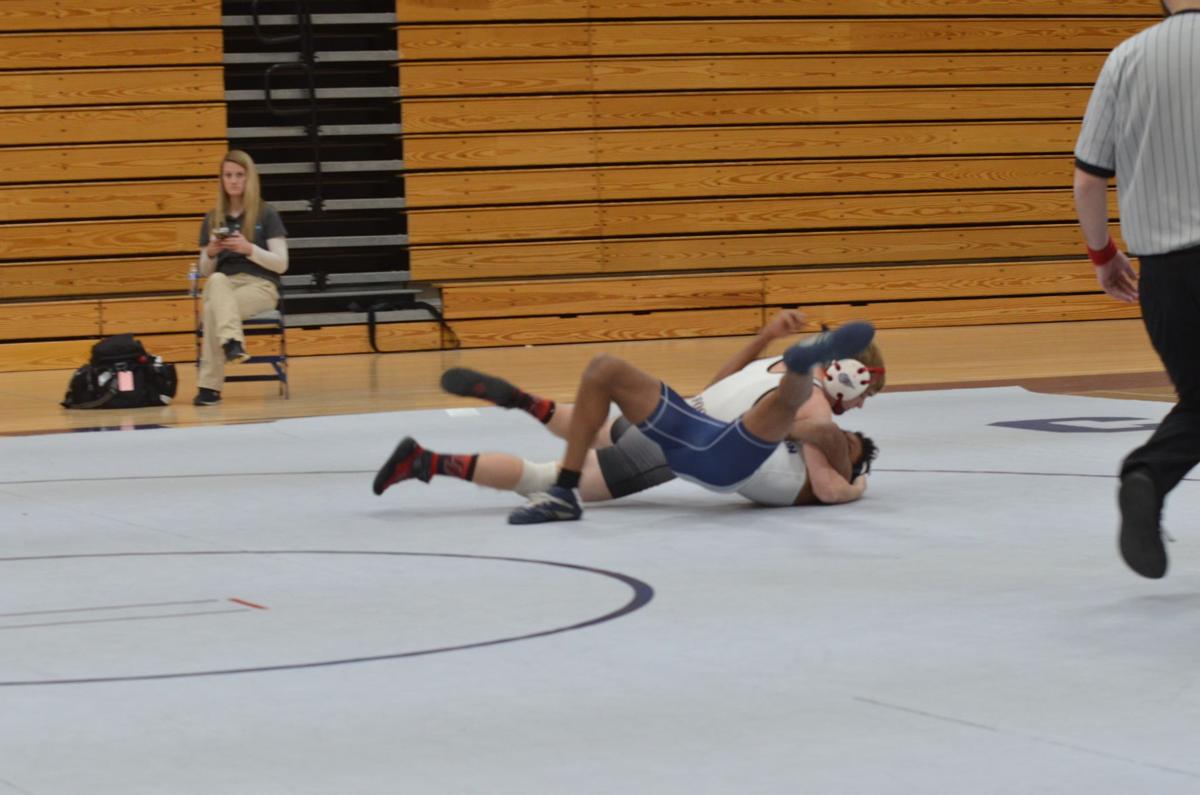 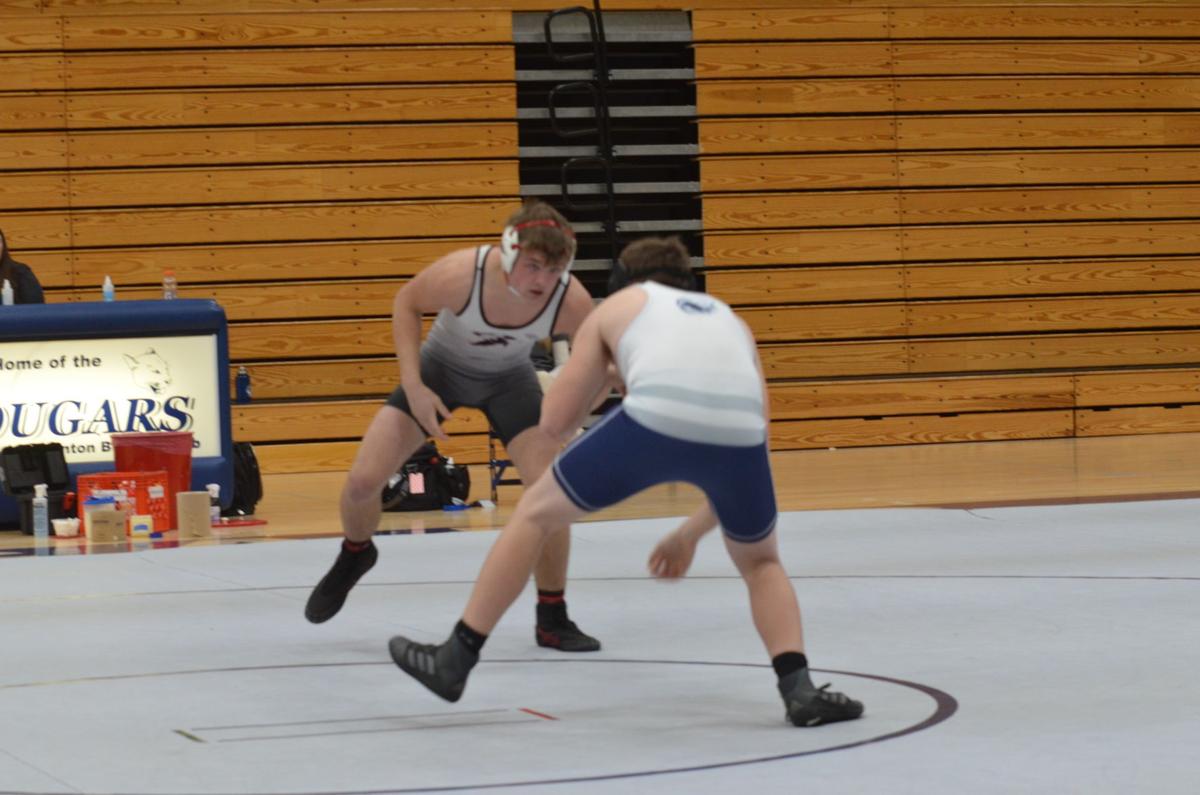 Big Foot/Williams Bay sophomore Will Wojcik sizes up his Clinton opponent in the 160 lbs. weight class in the dual against Clinton Tuesday, Jan. 11, at Clinton High School.

It was a competitive battle on the wrestling mat with the Big Foot/Williams Bay Chiefs wrestling team, taking their final four matches and coming back for the team victory over the Clinton Cougars/Lady Cougars 45-33 in a Rock Valley Conference dual meet Tuesday night, Jan. 11, at Clinton High School.

Big Foot/Williams Bay senior Christian Carrerno took the mat first against Clinton’s junior captain Cody Sullivan. Sullivan was up 2-1 at the end of the first. Carreno got on top 3-2 briefly in the second round before Sullivan earned a takedown (worth two points) to go up 4-3. Carreno briefly tied it up at 4-4 early in the third with an escape (worth one point), but he would go on to lose the match by a final score of 9-6.

“He gave up some weight, but wrestled well against a really good kid,” Big Foot/Williams Bay head coach Tyler Heck said. “I think even though he lost, his match set the tone for what we needed. I thought it was a perfect second match in the dual.”

The first match of the night was won by Big Foot/Williams Bay’s Aaron Rowland by way of forfeit at 145 lbs., which was then awarded six points for the Chiefs.

Big Foot/Williams Bay senior Nate Hoyt followed up Carreno’s competitive match with a pin of freshman James Esselman in the 160 lbs. weight class to earn another six points to go up 12-3. Sophomore Will Wojcik got three more points for the Chiefs in a 9-4 over Clinton sophomore Gage Brown at 170 lbs.

Big Foot/Williams Bay went back out on top by six in the next match when junior Jax Hertel received victory by way of a Clinton forfeit.

But it didn’t take long for it the score to be all tied it up once again in the 220 lbs. weight class with Clinton junior Lance Kutz pinning Big Foot/Williams Bay junior Eddy Malbaes with 22.4 seconds left in the first round.

Clinton won the next two matches because of forfeits, giving them a 33-21 advantage with four matches left in the dual, but those final four matches were dominated by Big Foot/Williams Bay wrestlers.

Big Foot/Williams Bay 120 lbs. sophomore Chase Rodriguez earned six points with a pin followed by a pin from teammate Austin Cocroft over Clinton sophomore Taylor Beaudin to once again tie things up at 33-33.

The pinning streak continued for the Chiefs in the final two matches, with wins 132 lbs. junior David Hernandez and 138 lbs. Grayson Gunrow. The Chiefs closed out the dual with 24 unanswered points to earn the team victory.

“That was a fun one,” Heck said. “We knew coming in that was going to be a close one, they usually are, especially the last couple years. We were down a couple guys tonight, had to do some shuffling around and it really helped in a lot of places. We had kids who stepped up and did what we needed them to do.”

Big Foot/Williams Bay sophomore Will Wojcik sizes up his Clinton opponent in the 160 lbs. weight class in the dual against Clinton Tuesday, Jan. 11, at Clinton High School.