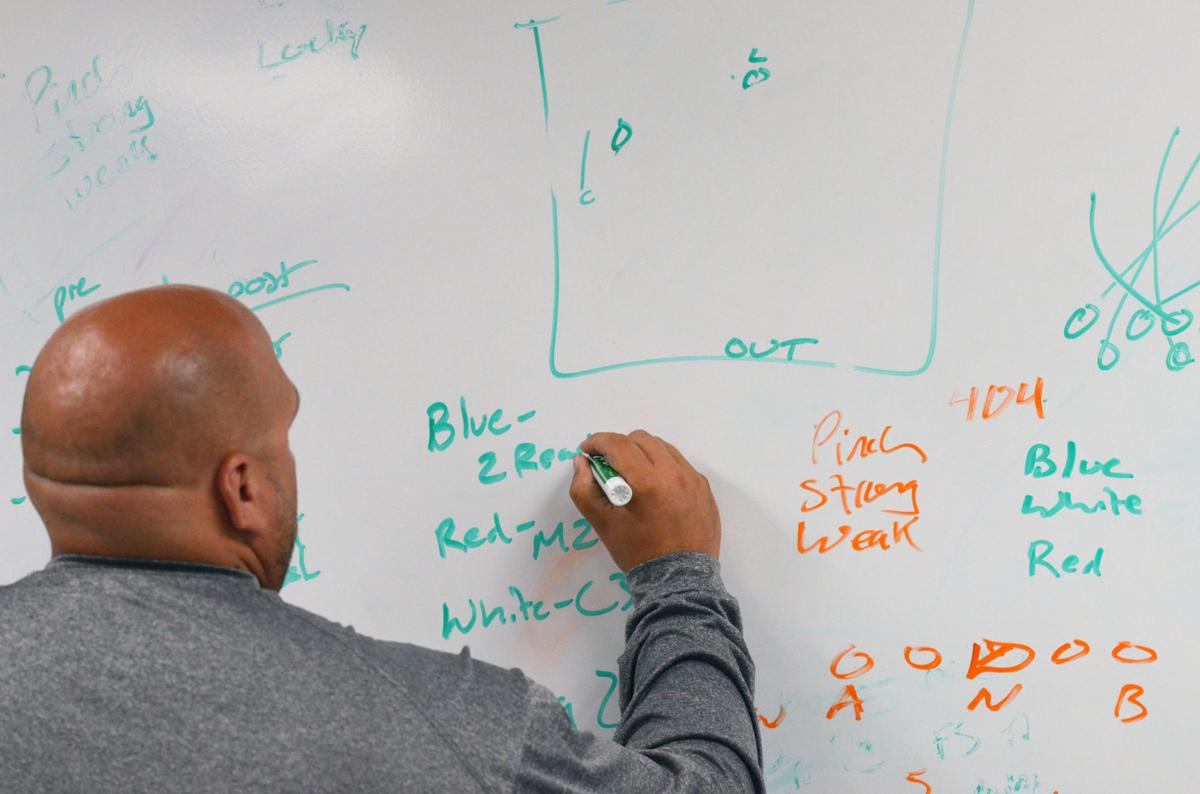 Big Foot football coach Mike Welden draws up some play ideas on a crowded whiteboard in his office at the high school. (Photo by Andrew Tucker/Regional News) 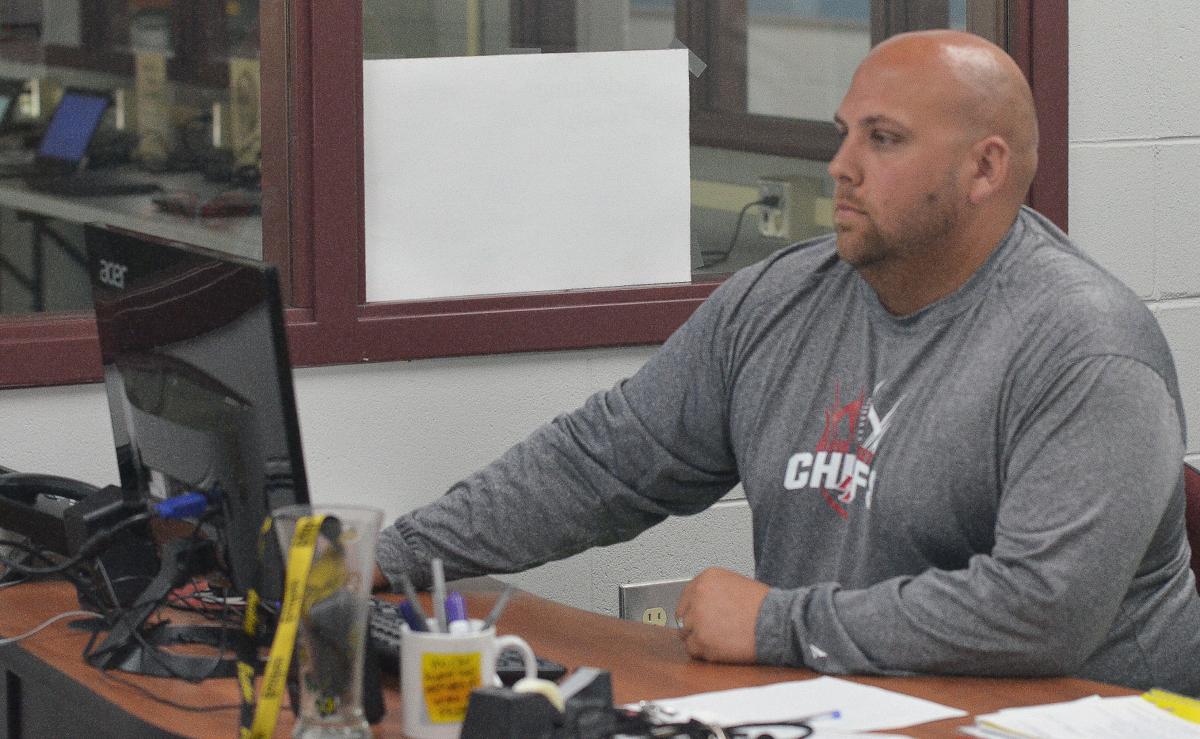 With no practice time this summer so far, Welden and his staff has relied on online communication with players to help them learn the new playbook.

After a decade of climbing the coaching ranks, Welden is taking the reins at Big Foot in his first head coaching role.

Welden, who worked alongside seven different varsity head coaches over his 10 years with the Blackhawks, will use his experience handling transitions to jump into his first season with the Chiefs.

Welden, who was hired by the Big Foot School Board on April 15, has a goal in mind for his first year. He wants the Chiefs to make the playoffs again after missing the cut the past two seasons.

This conversation has been edited for clarity and brevity.

Did you play football in high school or college?

No, that’s the crazy thing. I loved it always, but I was one of those kids that always worked in high school and regretted it. I had a little extra money compared to everyone else, but in the grand scheme of things I realized that after a semester of college that money’s gone and I’m like “What did I do?” I had some kids at Grafton where they were going to quit to work and I pulled them aside and we had that conversation where I said, “Hey, you can do what you want to do, but from my experience, you’re going to regret this. It’s something you can’t redo when you’re 22 years old.”

With so many head coaches in your time at Grafton, what lessons did you take away from all that transition?

I think going through so many head coaches there gave me an opportunity to work with a lot of people, build my network, and find things they did great and I want to steal and things I wouldn’t do it that way if I had the opportunity to do it myself. It really all comes back to the kids and building a relationship with them. Yes, they’ve got to work hard, but it’s got to be fun, and that’s where we got to in Grafton where the kids were really working hard but really enjoyed it.

Will the team look very different on the field schematically this season?

Have you gotten much of a chance to work hands-on with the players since your hiring?

We’re limited on the amount of contact we can have with them, so we’ve put a lot of the onus on them with online stuff, where we can share it with them but we can’t do much about it. They’ve taken it on themselves to learn the defense, learn the offense. We had some 7 on 7 competitions and did pretty well against the Illinois teams we’ve played against and they have 25 practices all summer, we’ve had zero, they should be a bit ahead of us, and our guys are already picking things up. Our camp is in a week and a half when we finally get to coach them and work on technique and stuff.

Who are some of the returning players you expect to make an impact this season?

I got a chance to look at all their film from last year and there are kids at Big Foot that can really play football. I think we can put them in somewhat different positions this year to showcase their talents even more than they have been in the past, but there’s definitely some kids that can play at all grade levels. Jack Gillingham is going to be a really good football player, he’s got some collegiate interest. One of the most impressive kids I’ve seen so far has been Owen Martin. He’s completely changed his body, put on 25-30 pounds of muscle, he is a different kid than what I saw on film from last year, I’m expecting a huge season out of him. Cole Vance is working his tail off. Basil Demco, I don’t know what he’s going to play for us, offense, defense, quarterback, he’s going to get on the field at some point but he’s another one of those kids who clearly can be a difference maker if we put him in the right position. Sam Dickerson, he was one of the all-conference kids last year, he’s put in a ton of work. From a leadership standpoint, he’s not the most vocal person, but he’s bought in and he shows it with his work ethic. He’s always willing to help people out, especially those younger guys.

Last year’s team started out slow at 0-3 before bouncing back and finishing the season going 3-3 for a 3-6 season. Do you expect a similar growth throughout the year?

Their slow start last year was partially due to the teams they faced, and partially, no one wants to talk about it, but academics. They had a lot of kids ineligible due to academics and that was the biggest focus since I got the job, getting your grades right. I’ve sent kids out of the weight room so they can go to summer school, because it’s important to us that we get the academic thing figured out, because at the end of the day, that’s what we need for these kids to have success and to graduate. I think we are going to start fast. I try not to say wins, losses or anything, but we’re going to go out and try to get better every single day, and I think we’ve been doing that this summer and I think if we continue doing that, things are going to take care of themselves.

In the 2020-21 school year, Big Foot and Williams Bay are joining up with three other schools as part of a hockey co-op that will practice and play home games in Stoughton.

Harry Melges IV and Finn Rowe have traveled the world to sail, but currently find themselves training back in their old stomping grounds

Lake Geneva sports time capsule for the week of May 28

With few current sports events happening in the region, take a dive into seasons past to see what was going on in Lake Geneva 5, 25 and 30 years ago.

On May 19, Chiefs star Reagan Courier committed to Division 2 powerhouse Drury University on a full scholarship.

The Burlington High School wrestling program is reeling from another tragedy.

For Big Foot football fans, there will be a familiar face on the gridiron at the University of Wisconsin-Whitewater next season, after former …

Lake Geneva skier flips his way to the top

Badger student Ian Ward has traveled all around North America as he competes as a top-flight freeskier.

The WIAA Board of Control, which met virtually Friday, explored financial recommendations, verified dates for the boys golf state tournament in June, 2021, and approved an extension of the alternate year physical exam period.

High school football season is not officially set to begin until Aug. 4, with the first games not scheduled until Aug. 20. But that does not m…

Big Foot football coach Mike Welden draws up some play ideas on a crowded whiteboard in his office at the high school. (Photo by Andrew Tucker/Regional News)

With no practice time this summer so far, Welden and his staff has relied on online communication with players to help them learn the new playbook.