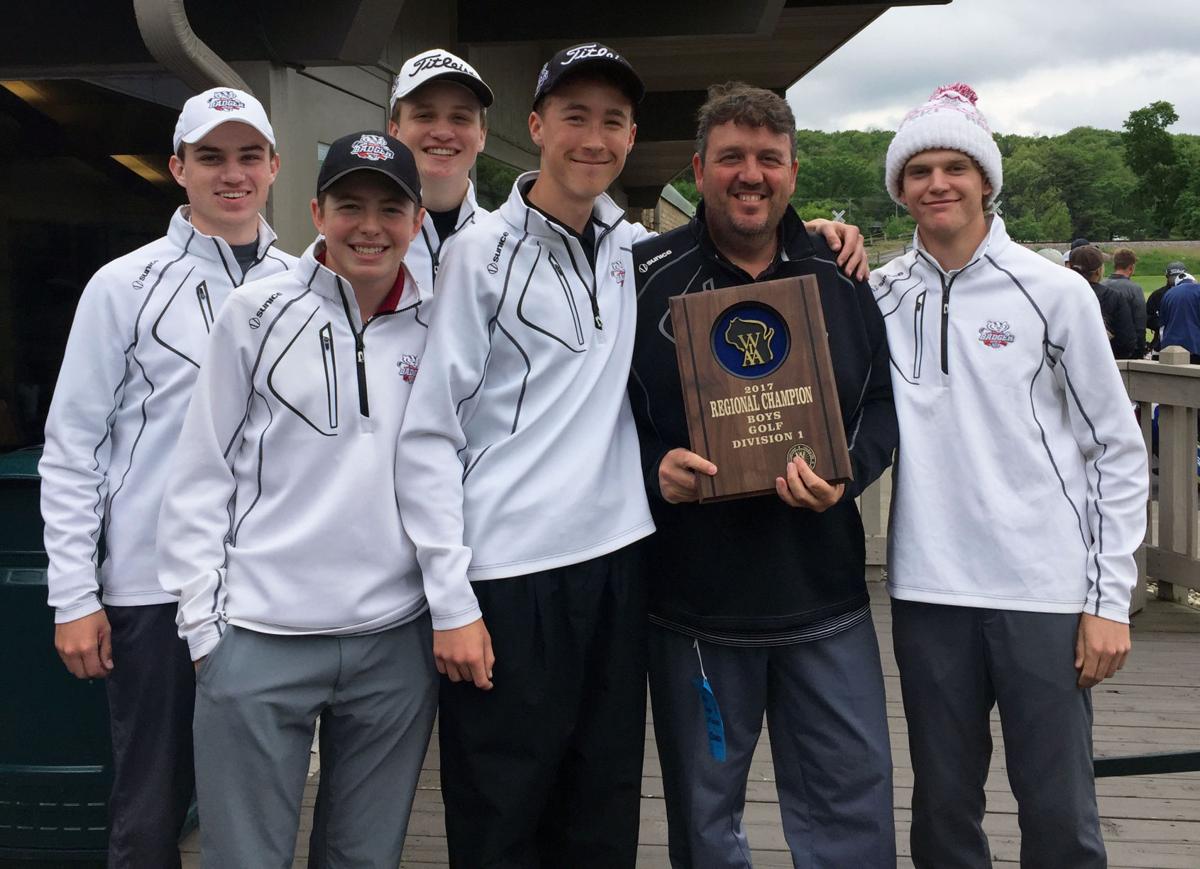 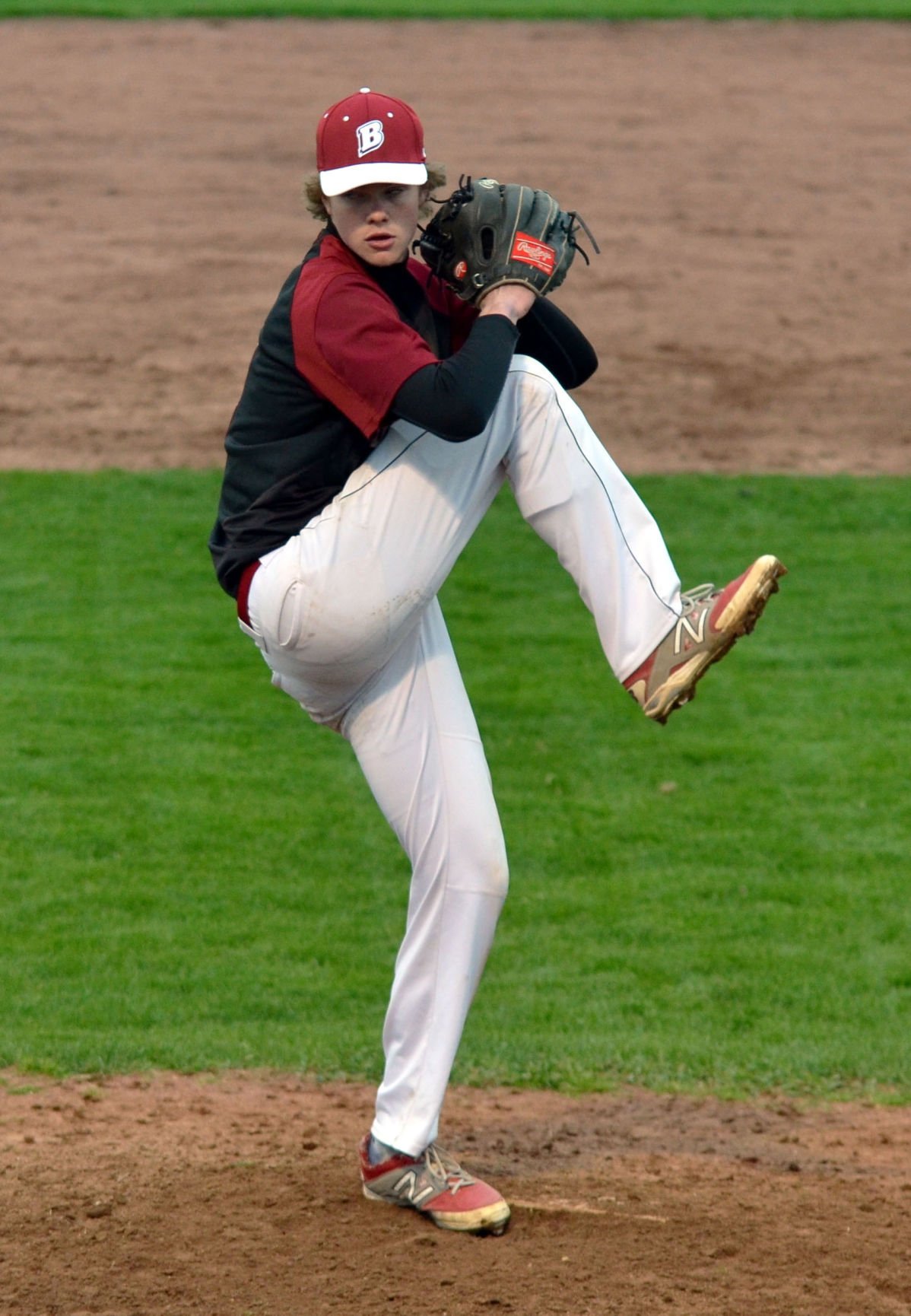 Senior Tyler Love was a shutdown reliever for the Badgers this season. He had a team-best 0.93 ERA and recorded 15 strikeouts in 15 IP. (Photo by Mike Masson/Regional News) 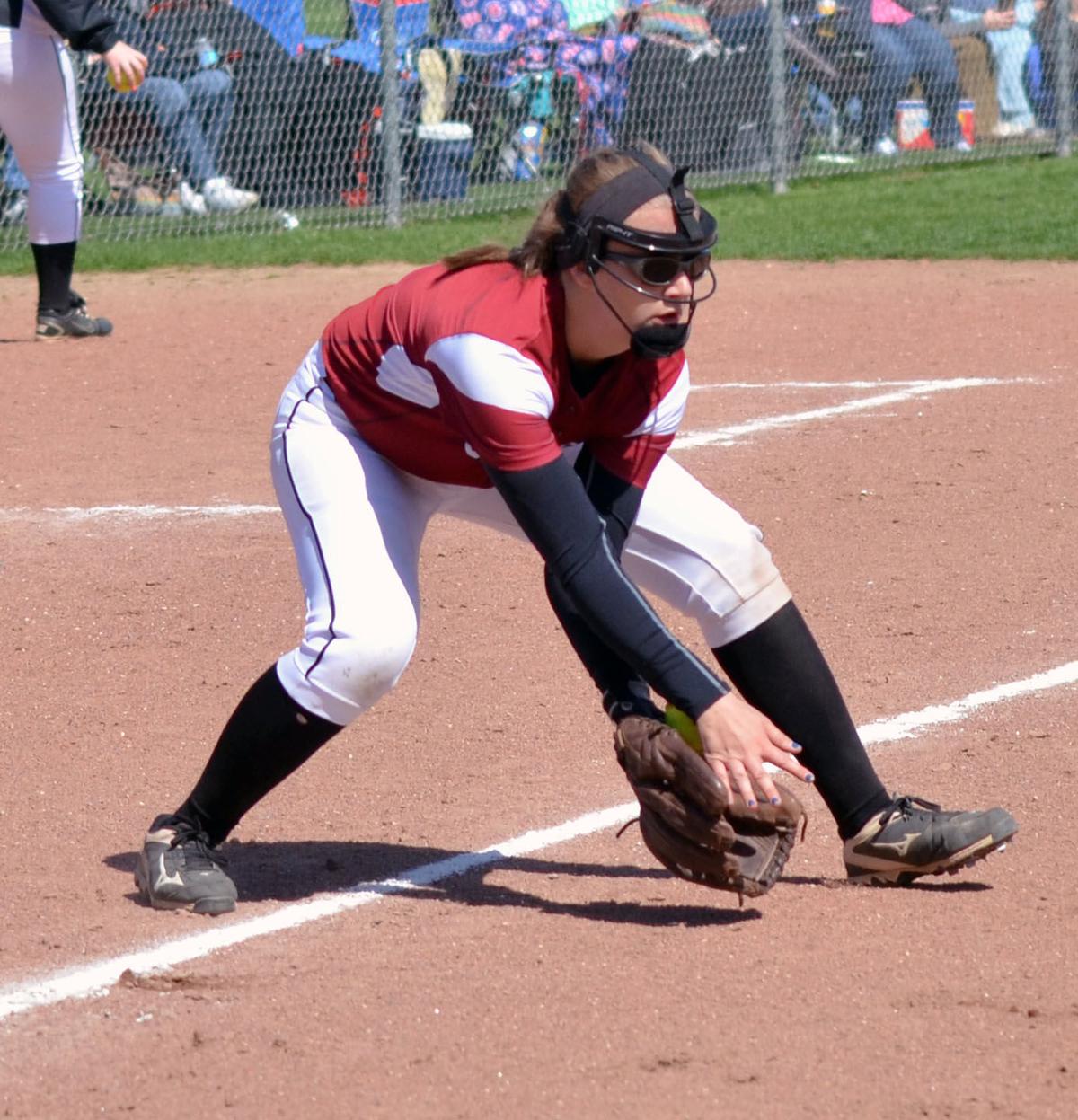 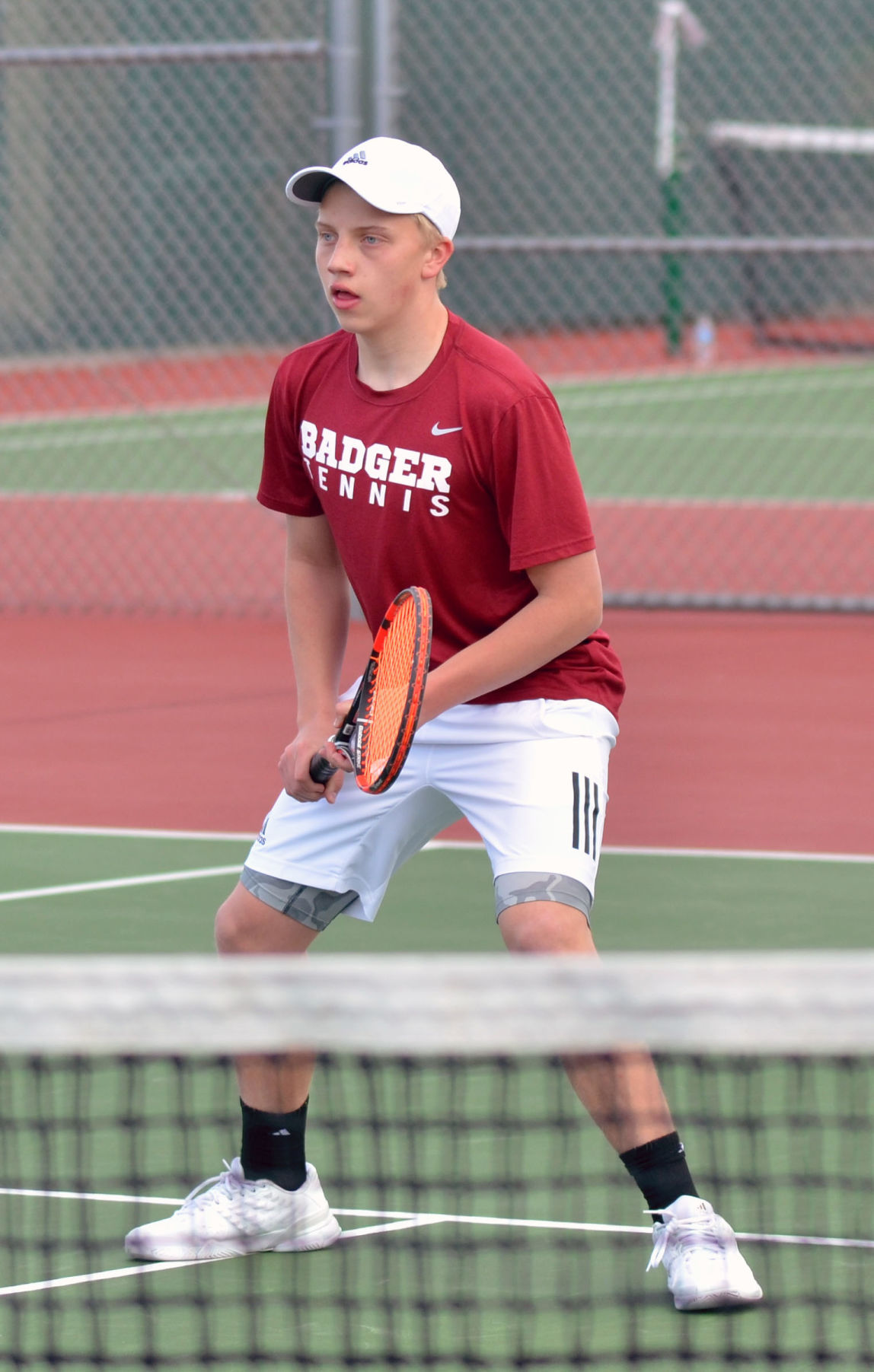 Sophomore Jordan Lauer will be defending his crown as the SLC Two Singles champion this season. (File Photo/Regional News) 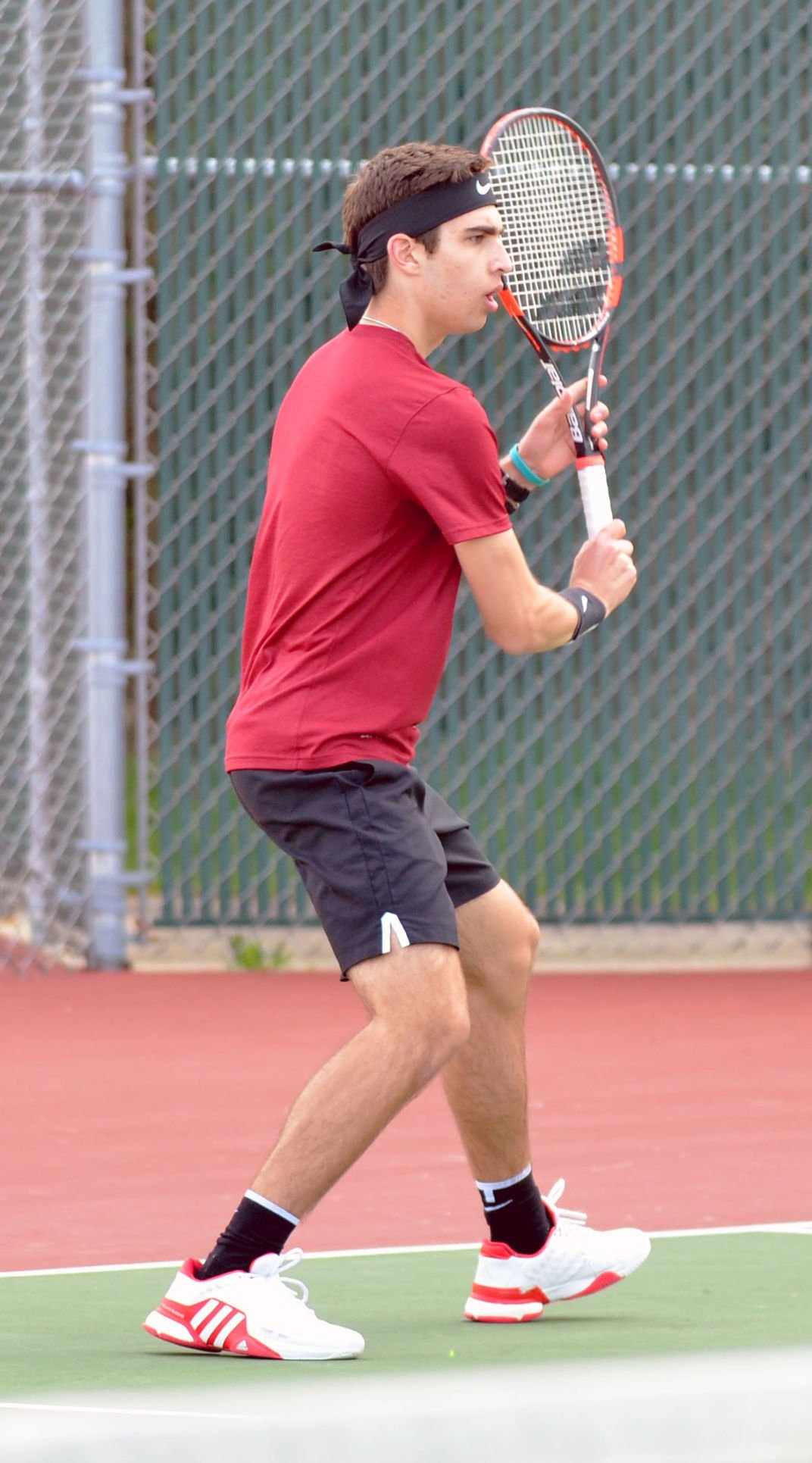 The Badger golf team claimed its third consecutive conference, regional and sectional titles over the past month.

And despite an eighth-place finish as a team in the Division 1 state tournament, all five of the Badgers’ main varsity players were honored by the Southern Lakes Conference.

Connor Duggan, junior, led the way with a 75.5 scoring average during conference play. He’s now received All-SLC recognition in three straight years, following being named to the second-team in 2015 and first-team in 2016.

Wisdom, sophomore, wasn’t far behind him with a scoring average of 75.75. He improves after being named to the second-team last season.

Rademaker, junior, averaged 76.5 and was named to the first-team for the first time after a second-team appearance in 2015 and an honorable mention in 2016.

Befort, senior, received an All-SLC honor for the first time behind a scoring average of 81.75

The Badger baseball team finished under .500 at 11-14 but advanced to the sectional round of the Division. 1 state tournament for the first time since 2013 before seeing its season ended by Waterford.

Two Badgers were recognized by the SLC for their performances during the spring.

Senior OF/P Tyler Love received an honorable mention after being named to the second team All-SLC in 2016.

Love hit .293 on the season while driving in 10 runs and led the team in stolen bases with seven swipes.

He was close to unhittable on the mound, posting an ERA of 0.93 on his way to recording three saves. He struck out 15 hitters in 15 IP.

Surges batted .324 and had an impressive on-base percentage of .425. He also finished the season with 12 RBIs.

This spring was definitely an improvement for the Badger softball team as the Badgers increased their win total from one in 2016 to 10 this season.

And two Badgers were rewarded by being named to All-SLC teams.

Sophomore infielder Madison Hunt received recognition for the first time, being named to the first team.

Three Badger soccer stars were honored by the conference.

Sophomore forward Brittany Gestrich was named to the second team for the second straight year following a season where she led the Badgers with 18 goals.

Senior Alyssa Borkowski was also named to the second team for the second year running. She also received an honorable mention in 2015.

And senior Kelsey Reece received an honorable mention. It is the first time she has been honored by the SLC.

Sophomore Mason Sniatynski was named tennis athlete of the year for the second straight season.

Sniatynski finished the season with a 19-4 record before losing in the second round of the Division. 1 state tournament.

Freshman Jordan Lauer was named to the second team along with the senior doubles pair of Ian Schirtzinger and Tim Von Seth.

The other Badger doubles team, the senior duo of Avaish Pirzada and Jack Wright received an honorable mention. Pirzada was named to the first team in 2016.

Junior runner Gustavo Gordillo received an honorable mention. Gordillo was the lone boy to represent Badger at the state meet in La Crosse, where he finished 21st in the 1600.

And senior thrower Elizabeth Bullock also received an honorable mention. Bullock was the lone girl to qualify for the state meet, where she finished 12th in the shot put.

Mike Masson has been the Lake Geneva Regional News sports reporter since March 2017. He grew up in Farmington Hills, Mich., a suburb of Detroit, and is a 2016 graduate of Michigan State University. He is a fan of all the Detroit professional sports teams.

Senior Tyler Love was a shutdown reliever for the Badgers this season. He had a team-best 0.93 ERA and recorded 15 strikeouts in 15 IP. (Photo by Mike Masson/Regional News)

Sophomore Jordan Lauer will be defending his crown as the SLC Two Singles champion this season. (File Photo/Regional News)