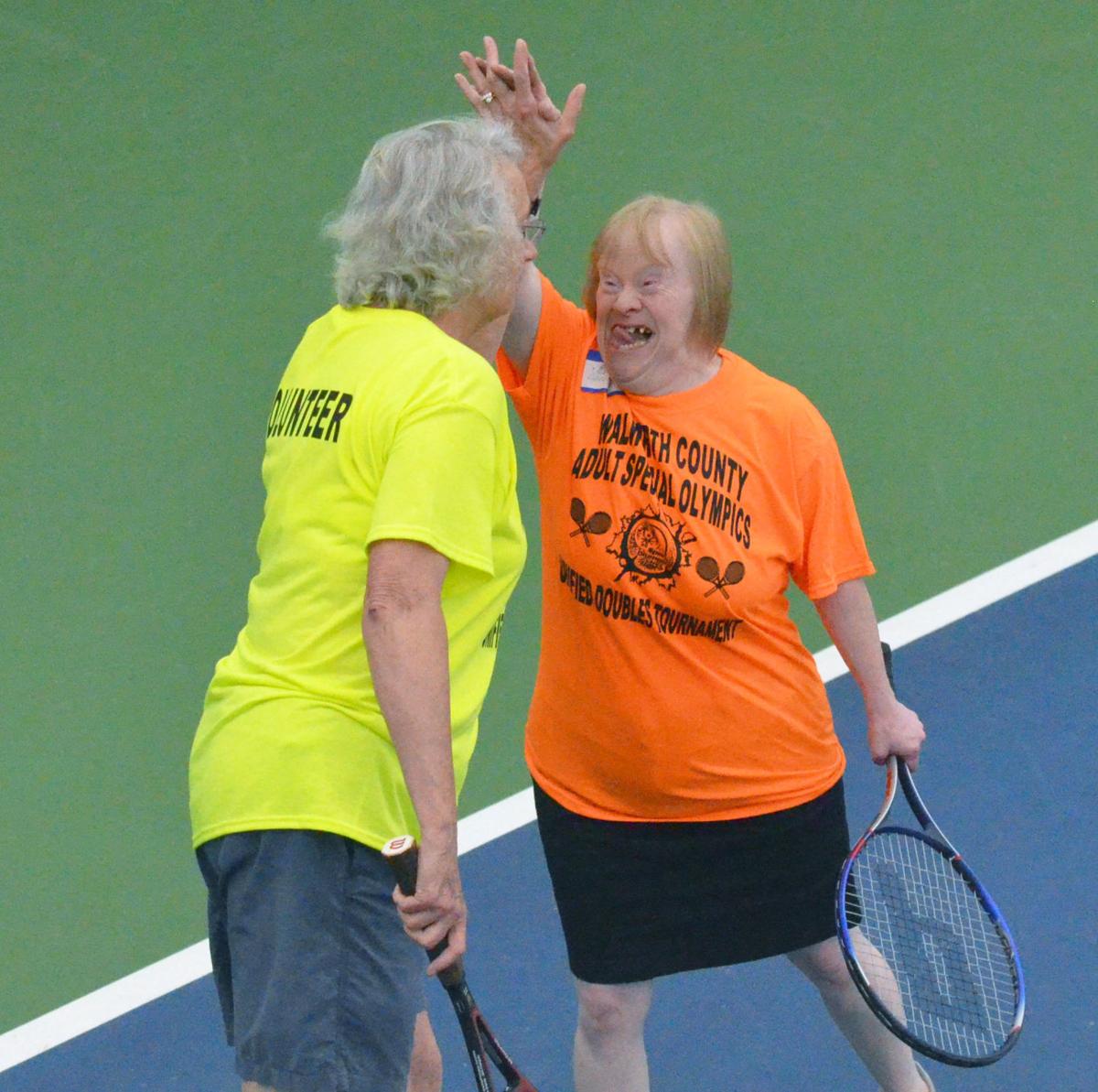 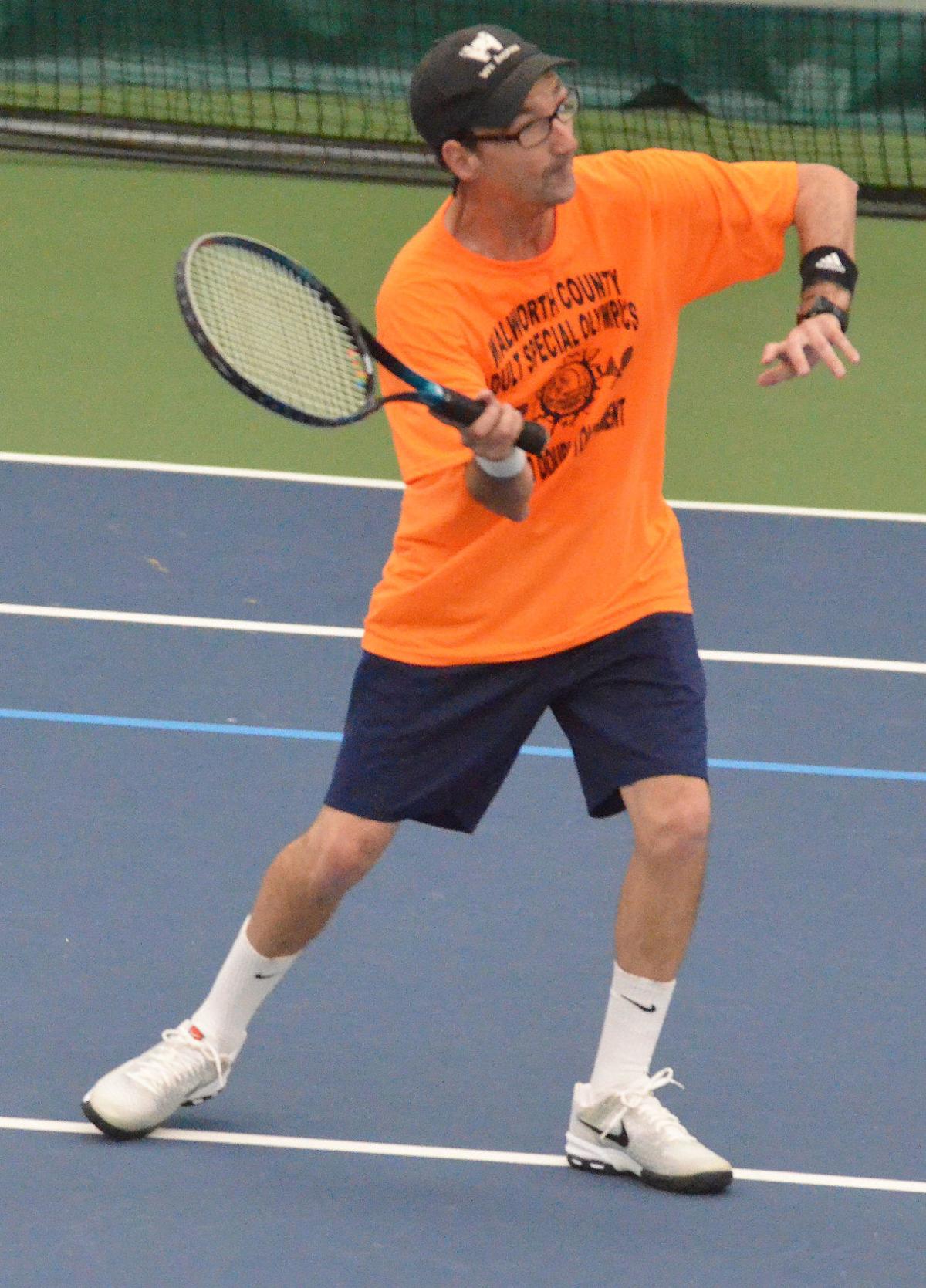 Michael Poll of Milwaukee swings his racket during a match in Wisconsin’s first ever Unified doubles Special Olympics tournament. 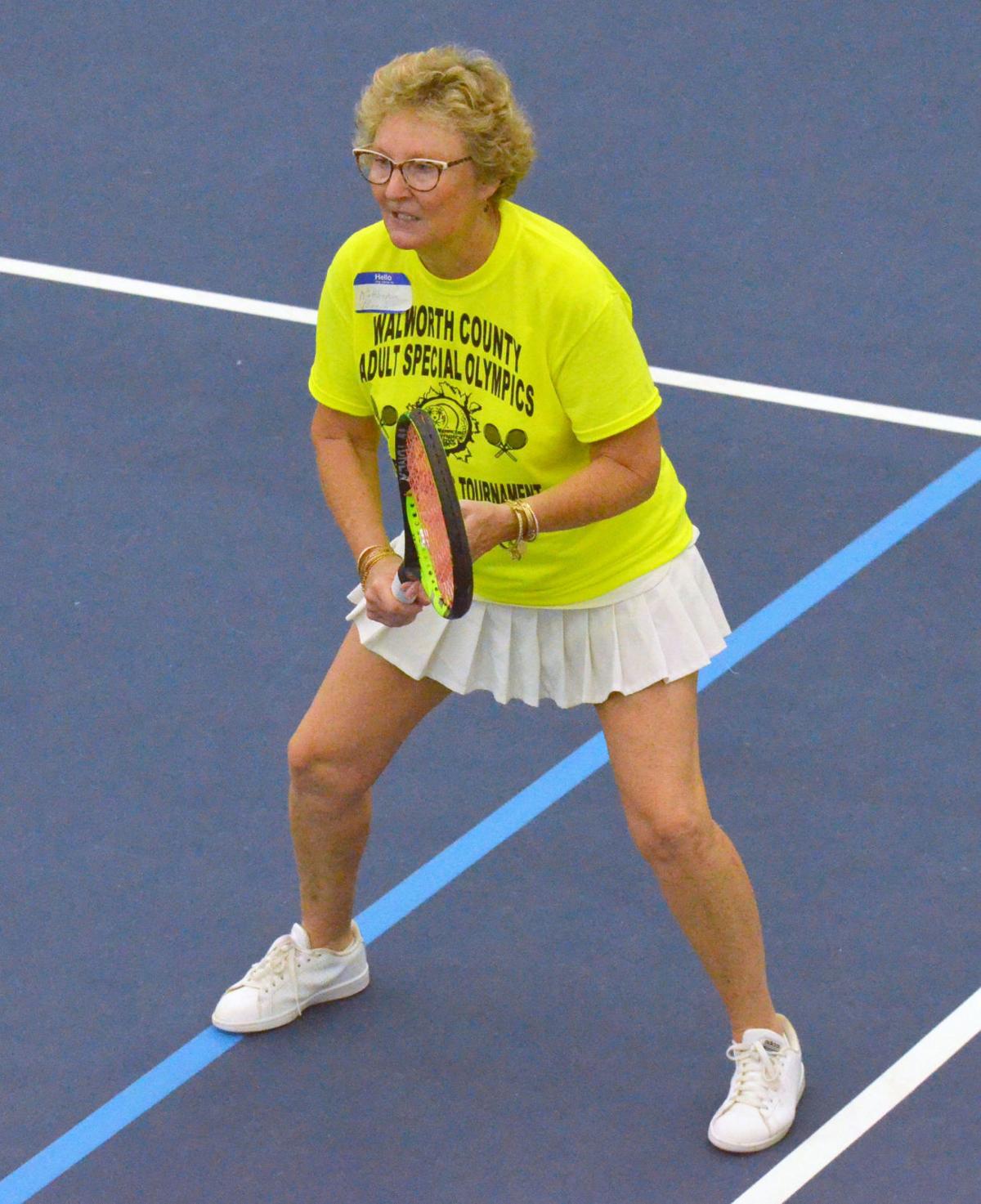 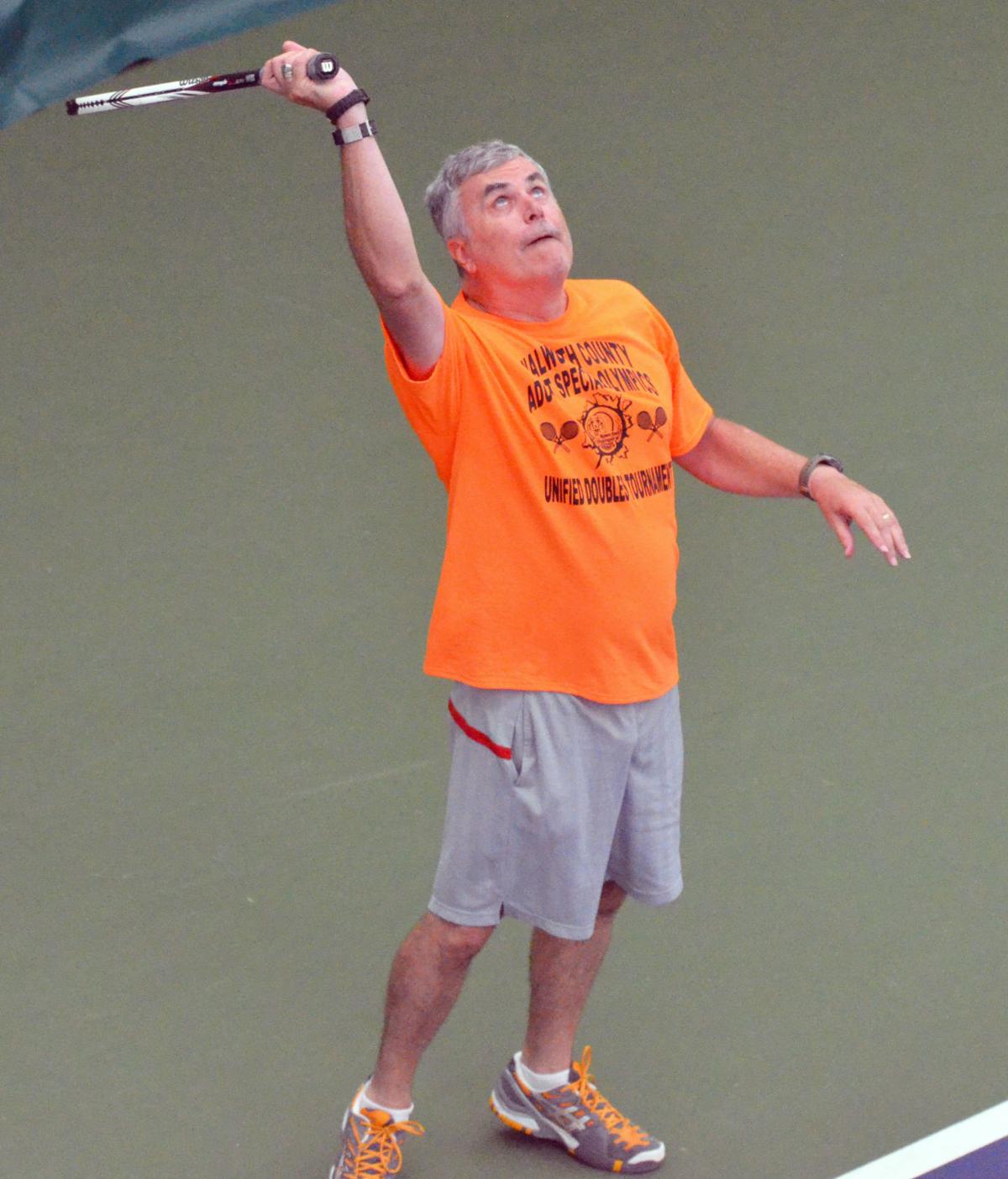 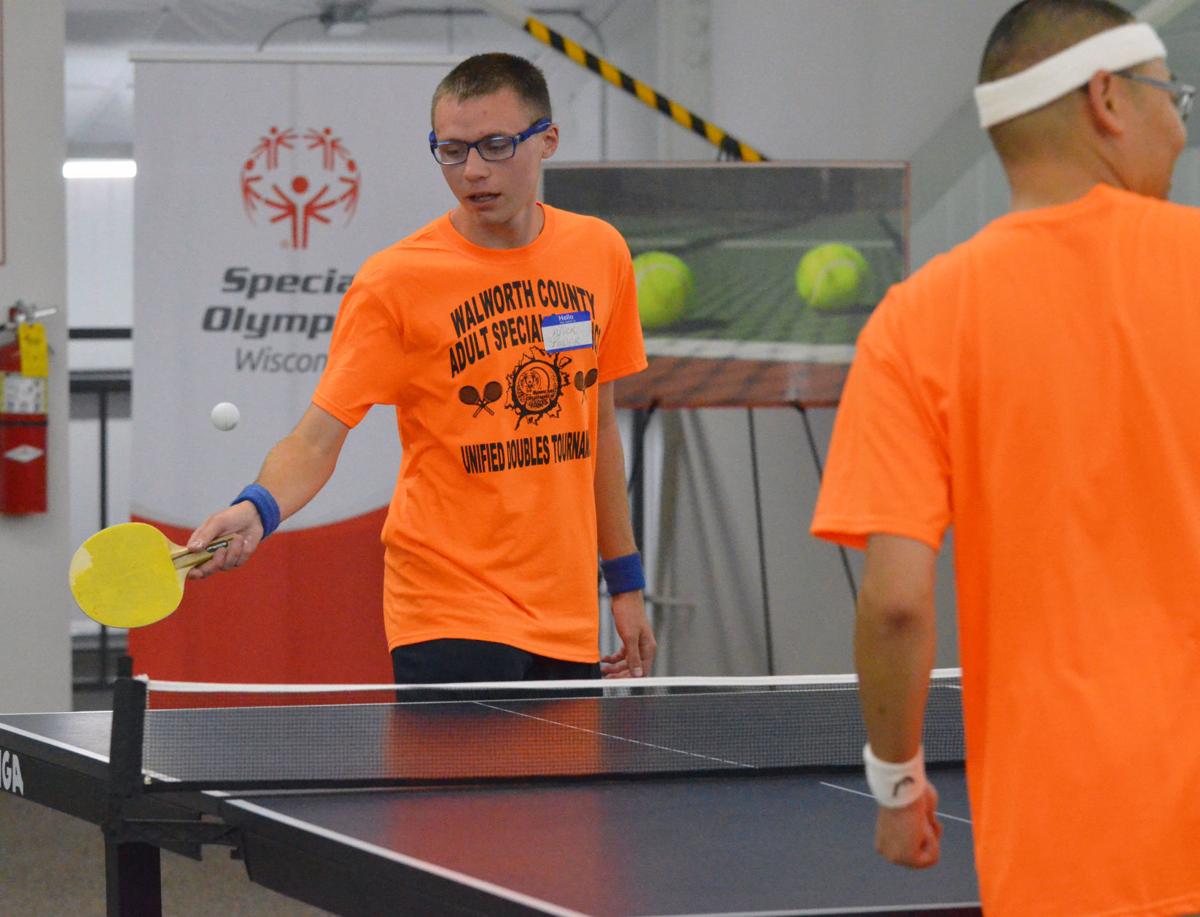 In their down time between matches, the Special Olympians mingled and played some ping pong during the July 20 tournament.

While there have been many tennis tournaments across the state in Special Olympics history, none of them have been a Unified format before.

“It’s kind of monumental, because we’re just a little over 50 years of Special Olympics being in existence. But this has never been done before, so that’s what makes it so exciting,” local Special Olympics organizer Betty Aguirre said.

Aguirre has dreamed of hosting such a tournament for years, and with the help of Paul Lauterbach of Lake Geneva Tennis, this tournament has been in the works for about a year.

Unified sports and a sense of inclusion for all athletes have been a major focus of the Special Olympics over the past year from national chairman Tim Shriver all the way down to the local level, making this the perfect time for Aguirre to realize her dream.

“What Special Olympics is becoming about is inclusion,” Roach said. “So people with and without disabilities are playing together, and this is a perfect example. It’s fun for everyone.”

An avid tennis player, Roach did not just come to the tournament to stand around and watch, though. She jumped onto the court as a volunteer for the day’s matches.

“I really love tennis, so it’s great I can come out here and play,” Roach said. “Because tennis is my sport, I really want it to grow. I think through what Betty is doing, this is really an opportunity to expose tennis to other people. They may be playing other sports, but now they can try tennis. They may like it, and they may not, but at least they tried.”

Heading into the tournament, Lauterbach and Aguirre were not sure how many athletes would attend. However, their expectations were surpassed when 23 doubles teams signed up, hailing from Walworth County, Milwaukee and Madison.

With this year’s success, Lauterbach is already thinking about how to run the tournament again next year.

“It being the first time, we had no idea. I’m blown away with 23 teams. I have a feeling next year we’ll have to do it over two weekends,” he said.

He was not the only one planning for future tournaments, either.

Don Wigington, Special Olympics Wisconsin vice president of sports and health programs, was happy that players from Milwaukee and Madison made the trip, and he hopes that in the future, athletes from Green Bay, Eau Claire and La Crosse will participate, too.

“Traveling is always hard for our athletes, and it costs the teams money. One of the things I want to do is find more grants we can use for transportation, because if the reason they aren’t coming is they can’t get here, that’s up to us to try to find a way to overcome that hurdle,” Wigington said.

One of the competitive tournament’s Special Olympians was 44-year-old Michael Poll of Milwaukee, who plays tennis every week with volunteers Brad Novak and Phil Sklar. Poll is a veteran of numerous Special Olympics sports, making it to the 2018 Special Olympics USA Games as a member of Wisconsin’s basketball team.

While Poll, Novak and Sklar were in Seattle at the 2018 USA games, they saw a Unified doubles tournament being played, and hoped they could join in the action when they got back to Wisconsin.

“We went to the USA games to support Michael last year in the summer and found out about the Unified doubles format and thought it would be really cool to participate,” Sklar said. “So we kept asking special Olympics Wisconsin if there would be an event. We found out a couple months ago that they were having this event, and signed up right away.”

Now that he has gotten some tournament experience under his belt, Poll has his sights set high in tennis.

“It’s a goal for me and my friends Phil and Brad to try to make it to the U.S. Unified tennis team in the 2022 USA Games in Orlando, Florida,” Poll said.

While the event on the court was all about inclusion for the athletes, the off-court happenings did a good job of bringing people together as well.

Aguirre and the Walworth County Special Olympics agency partnered with Lake Geneva Tennis to put on the event. Local volunteers, including the Lake Geneva fire and police departments, made sure the event ran smoothly. And lastly, the athletes got to socialize with volunteers and one another.

“Even when they’re not playing, they’re talking and interacting. The community comes together,” Wigington said.

Michael Poll of Milwaukee swings his racket during a match in Wisconsin’s first ever Unified doubles Special Olympics tournament.

In their down time between matches, the Special Olympians mingled and played some ping pong during the July 20 tournament.