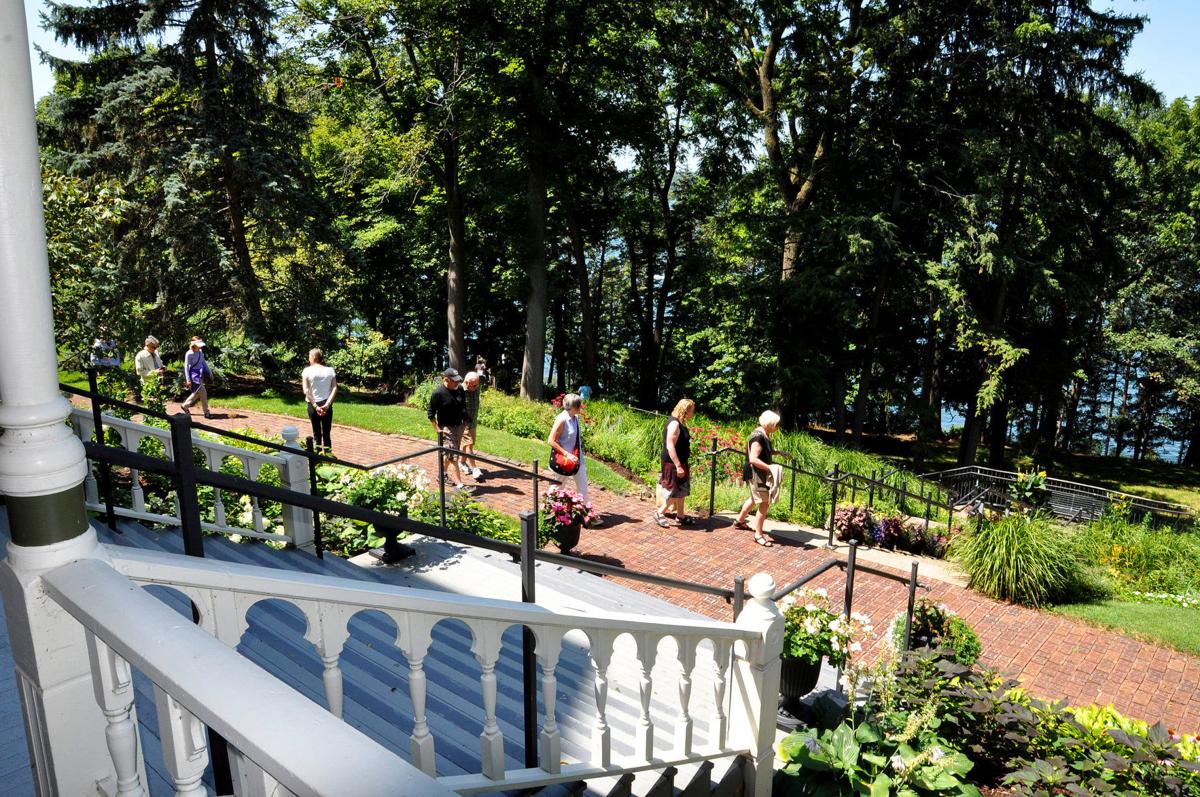 Tourists enjoying the grounds of Black Point Estate and Gardens, town of Linn. 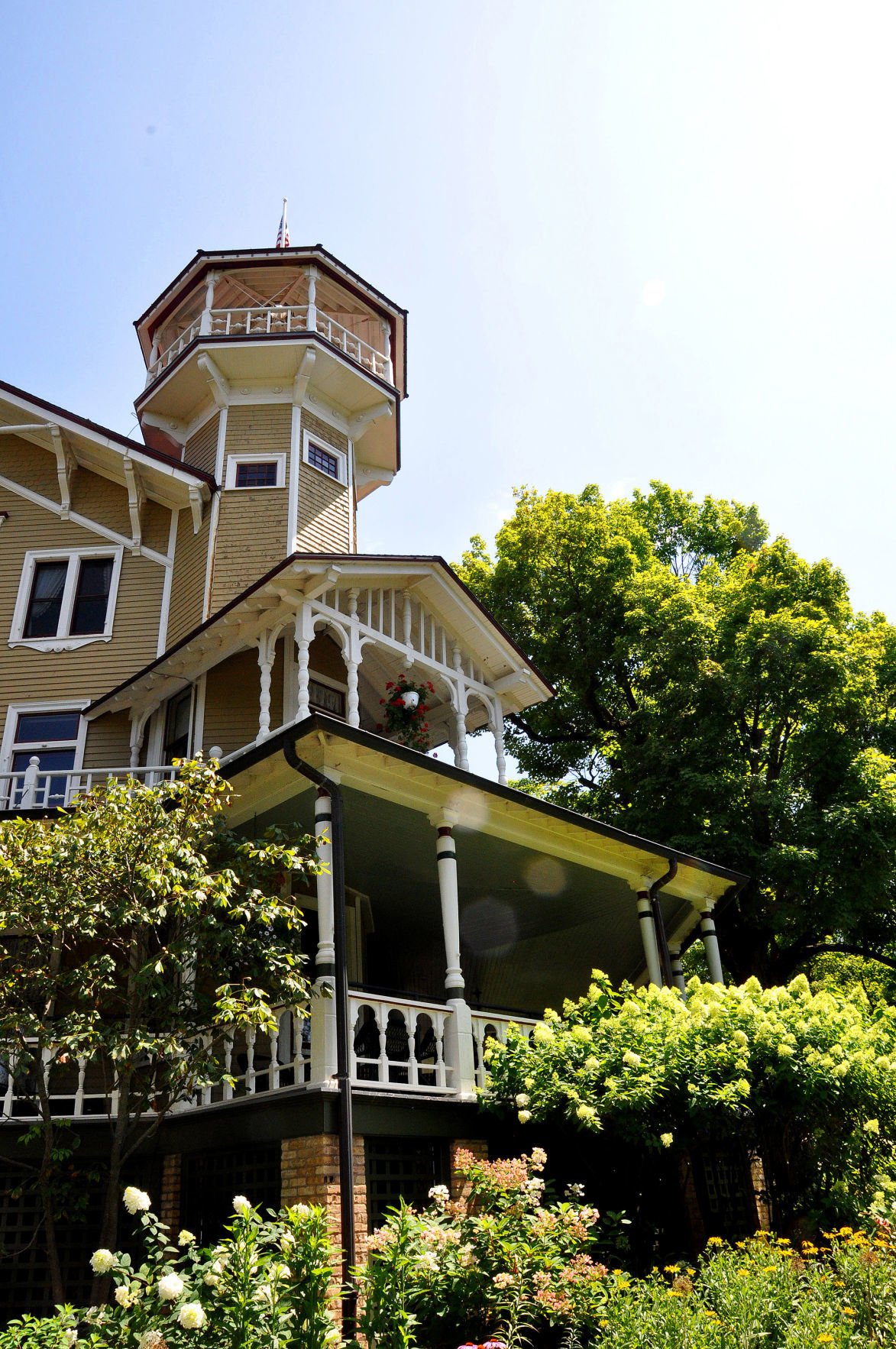 The summer sun beats down on Black Point — a three-story, 20-room “cottage.” 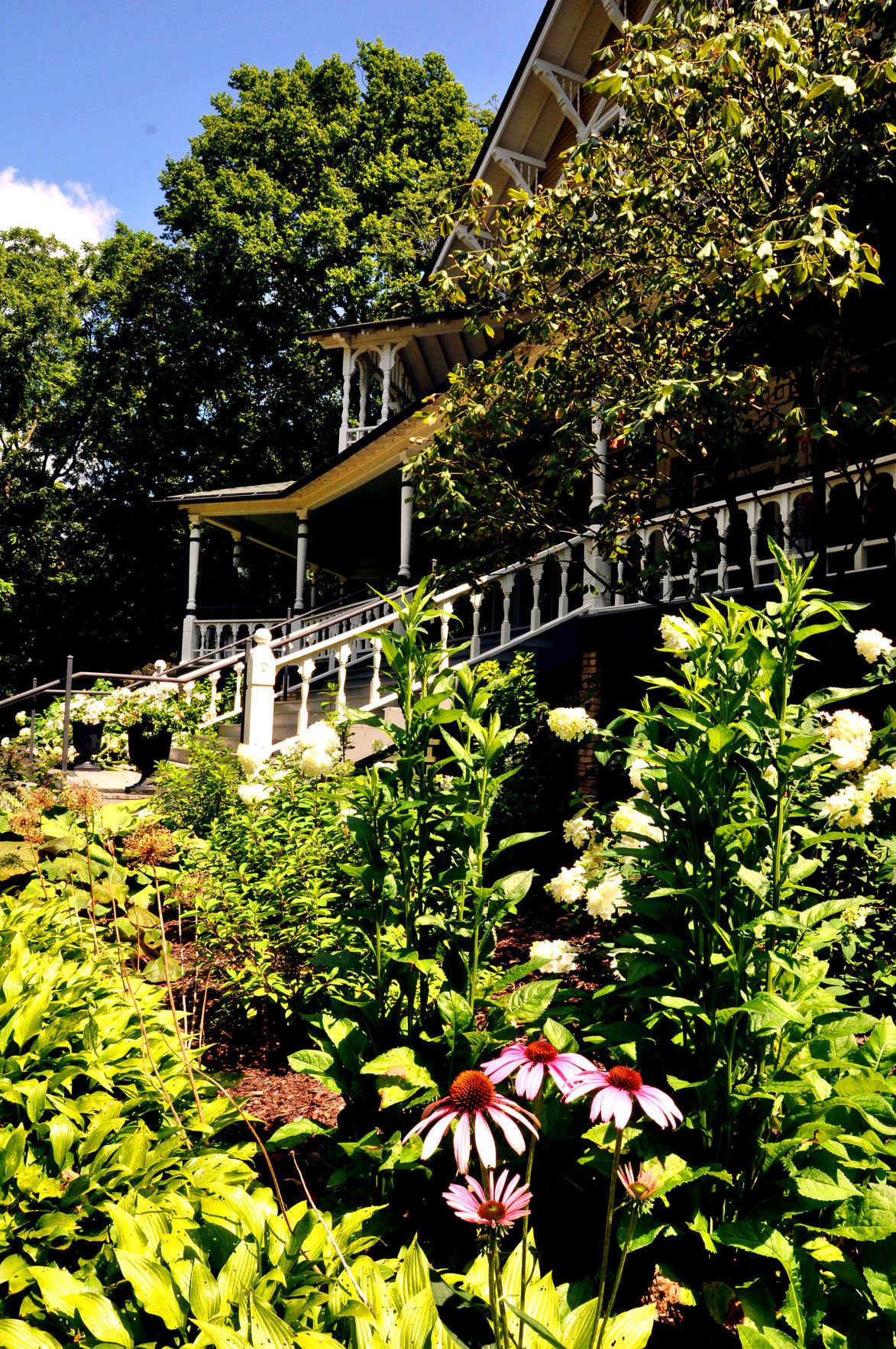 Plant colors explode mere steps away from the veranda at Black Point. 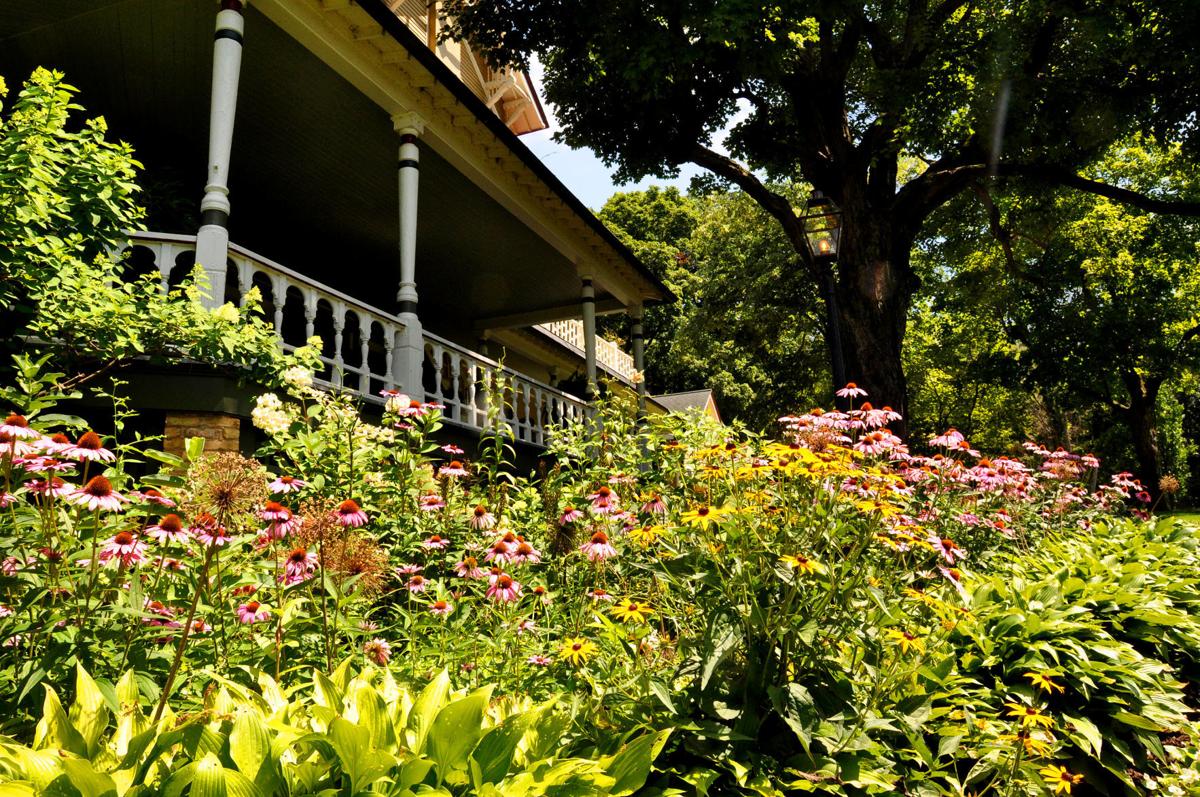 Some of the plants near the Black Point veranda. 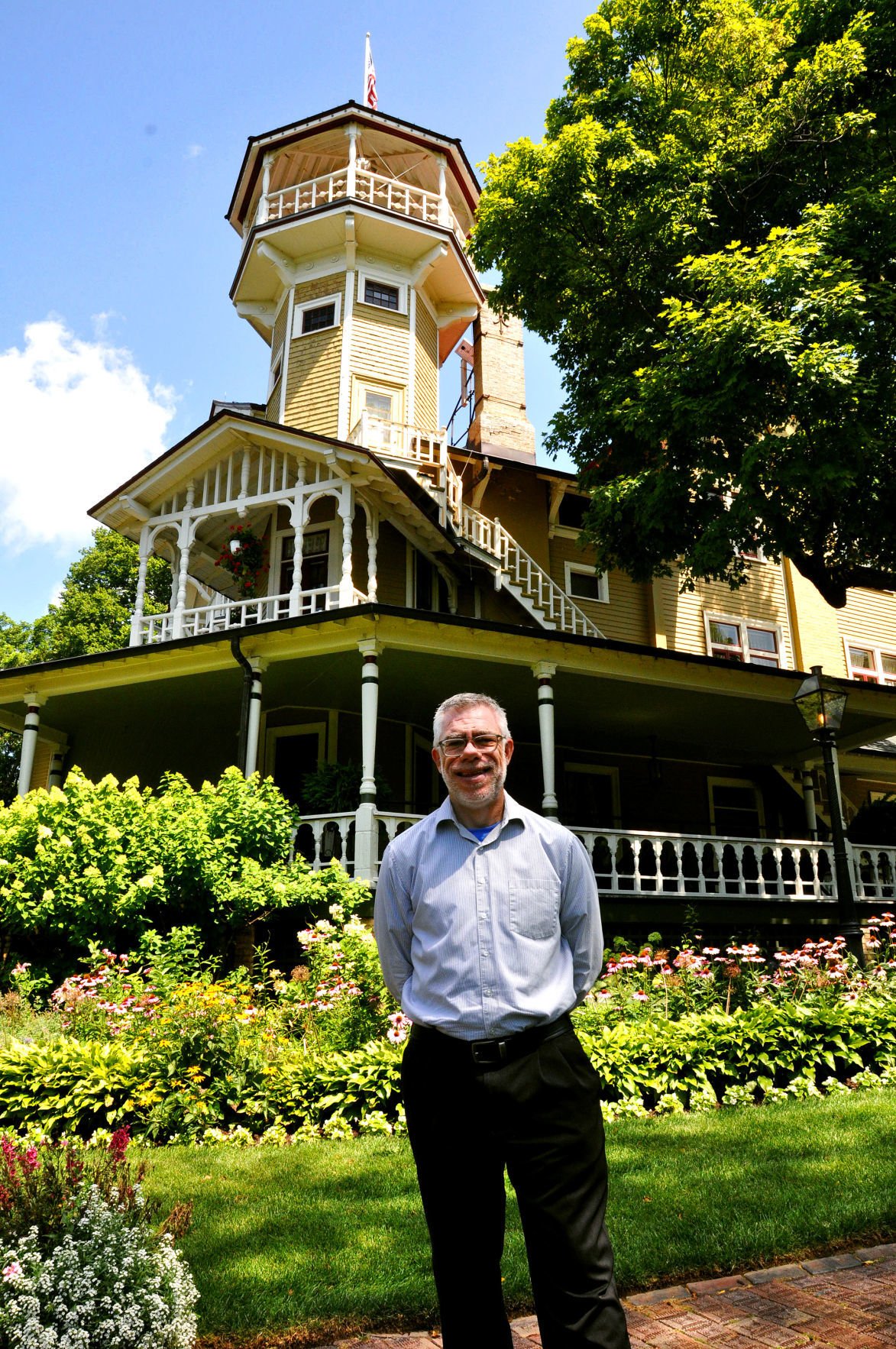 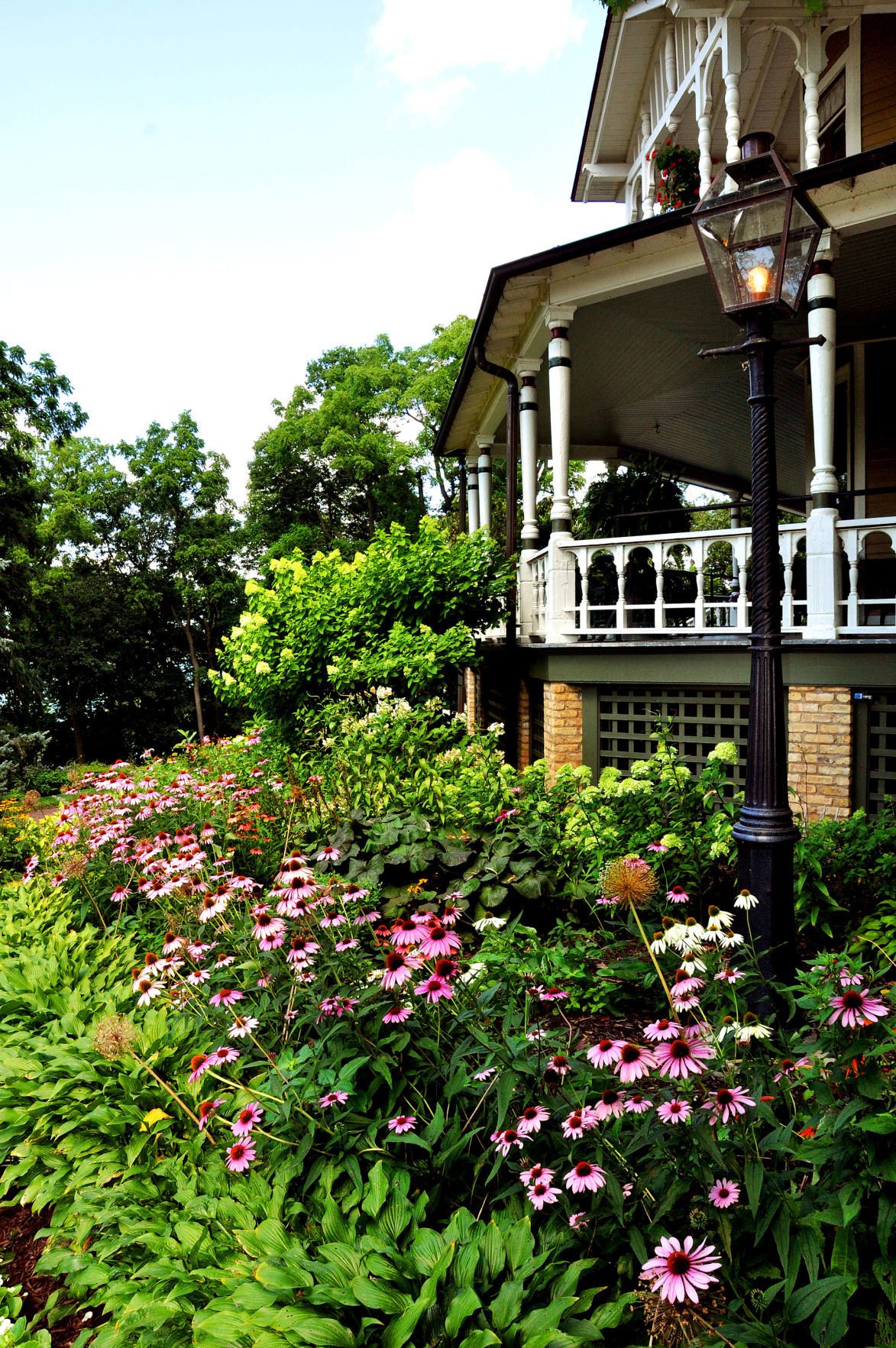 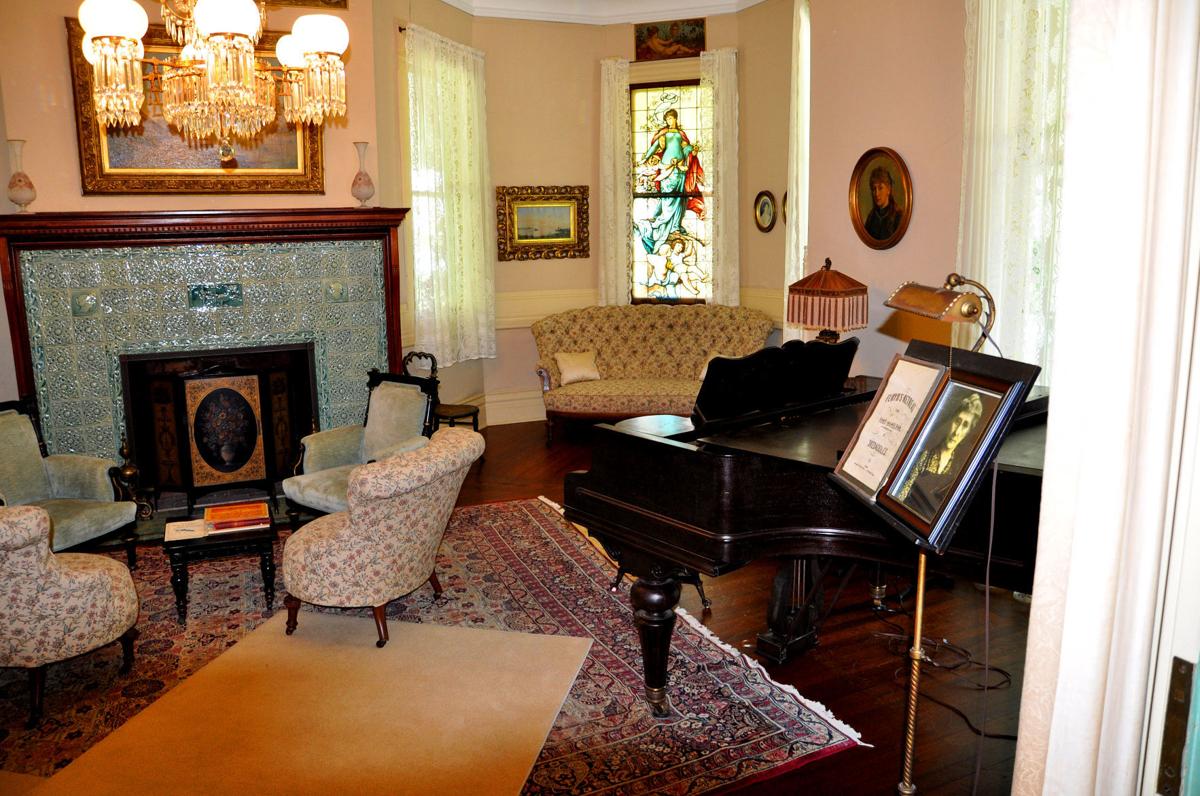 Inside, the furnishings of Black Point help to tell the tale of Geneva Lake life as it was lived by the Seipp family. 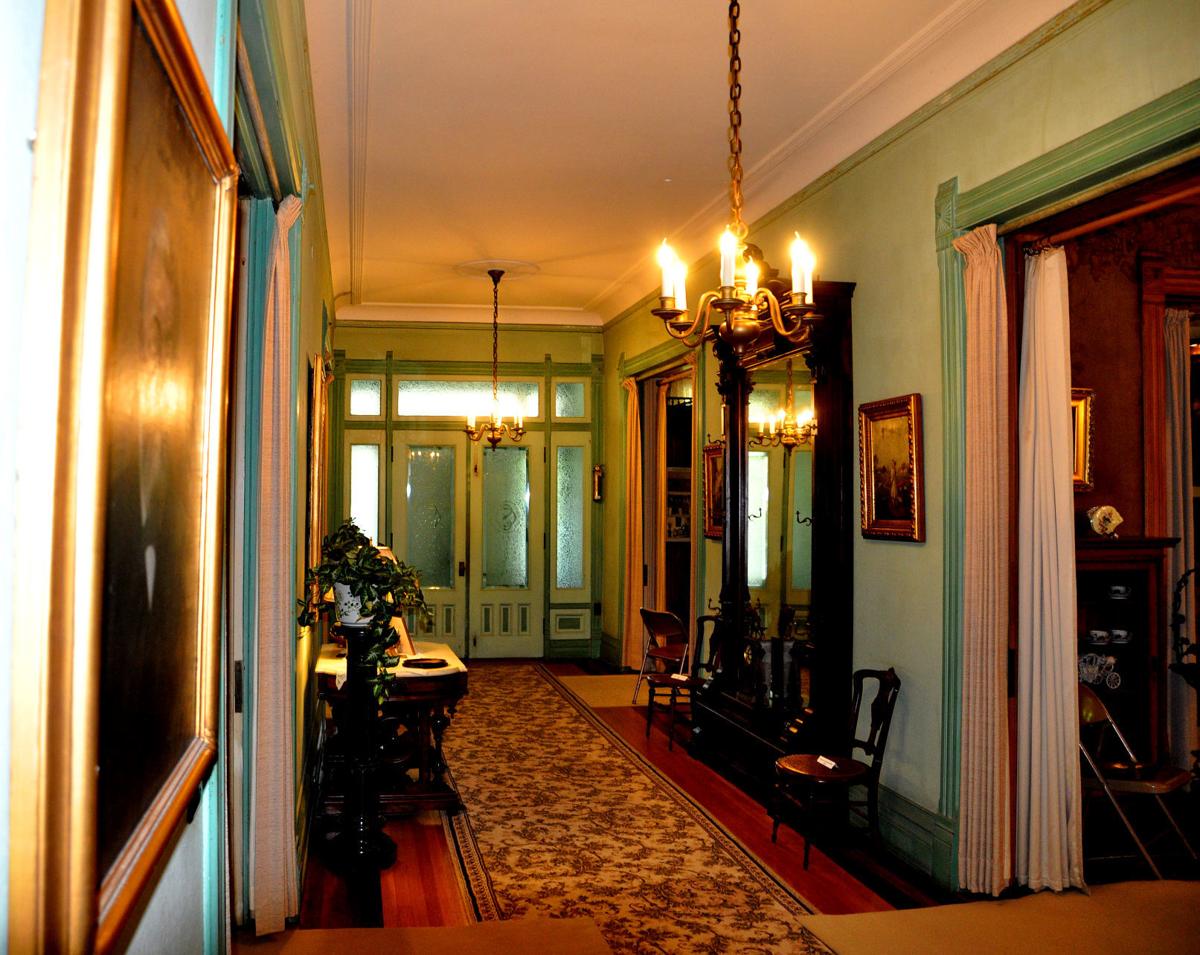 One of Dave Desimone’s goals for Black Point is to have a report done in the next 10 years to determine what, if any, interior restoration is needed.

TOWN OF LINN — A Geneva Lake breeze swept across the veranda of Black Point Estate and Gardens as Dave Desimone explained how the tour boat is a time machine.

The Black Point director was describing how the Lake Geneva Cruise Line takes guests across Geneva Lake, from the Riviera in Lake Geneva, to an over 130-year-old remnant of Victorian Era architecture that looks untouched by age.

Tourists can arrive by boat, just as guests likely would have traveled to Black Point in the 19th century, on a ride that Desimone said melts away anxieties yet helps build anticipation.

“Whatever could go wrong, it doesn’t matter because by the time they sit down on that boat, you could be in the worst mood and after five minutes of riding on this lake, well, it’s gorgeous,” he said.

Tourists then leave the boat and take the 120-step walk up the hill, where the Black Point home and gardens lie, tucked away in thick forest serenity.

“And when they get here, they are ready for an experience,” Desimone said. “They are ready to be taken back in time.”

To transport people deep into history, Desimone is looking to the future and the present – new programs, preserving the Black Point home and enhancing its colorful gardens.

He hopes to restore the home’s interior and improve other aspects of Black Point over the next 10 years.

It has been an ongoing effort to keep the property looking as if it hasn’t aged a day since it was first built in 1888.

Back then, it was called a “cottage,” a term which today can only be applied ironically to the 8,000-square-foot, Queen Anne-style home.

Black Point has three floors, 20 rooms, a veranda, a deck off the second floor, a balcony off the third and a tower.

For almost 120 years, the property remained in the family of its builder — Chicago beer magnate Conrad Seipp.

His great-grandson, William Petersen, gave Black Point to the state in 2005, which has since operated it as a museum.

Since 2007, people have been visiting the historic estate by boat, bus, trolley or through direct site access for those with physical limitations.

Desimone said the tour gives people a glimpse of lake life as well as the story of the Seipp family and its efforts to help people and preserve history.

Intern Braiya Nolan said one of her favorite parts of being a Black Point tour guide is learning about the Seipp family’s kindness.

“Even though this family was super rich, and they had all of this and more, it’s super awesome how philanthropic they are,” said Nolan.

In recent years, Black Point has seen some significant projects to enhance the property.

The veranda was rebuilt, from foundation to roof, with all new materials.

In 2018, a half-acre woodland garden was installed on the property.

Designed in 2017 by Ted Wolff Landscape Architecture, it was inspired by the work of a landscape architect Catherina Seipp — Conrad’s wife — hired around 1900.

The architect was Olof Benson, one of the designers of Lincoln Park, in Chicago.

Featuring over 30 types of plants, the Wolff-designed woodland garden was installed by Northwind Perennial Farm in summer 2018.

Among his future goals are more plantings to further the screening of the property.

Desimone also said they will add a “brewery garden,” which would feature plants necessary to make beer, such as barley and hops.

“The plan for this garden is to open — pending funding — by summer of 2020, just in time to celebrate the 100th year of prohibition,” said Desimone.

The museum will also conduct a report to determine if there is any hidden structural damage to the Black Point house.

Desimone said he does not suspect there is, “but that’s the start.”

If there is no damage, cosmetic work is still necessary — painting, refinishing the floor and plaster repair.

In the last couple years, Black Point has rolled out more programs — beer tastings, yoga and art and music events — as another way for guests to experience the property.

“The idea is we’ll never divorce ourselves from our historical focus, but we want to allow people who are within the area to experience the site and create their own memories,” said Desimone.

Tourists enjoying the grounds of Black Point Estate and Gardens, town of Linn.

The summer sun beats down on Black Point — a three-story, 20-room “cottage.”

Plant colors explode mere steps away from the veranda at Black Point.

Some of the plants near the Black Point veranda.

Inside, the furnishings of Black Point help to tell the tale of Geneva Lake life as it was lived by the Seipp family.

One of Dave Desimone’s goals for Black Point is to have a report done in the next 10 years to determine what, if any, interior restoration is needed.