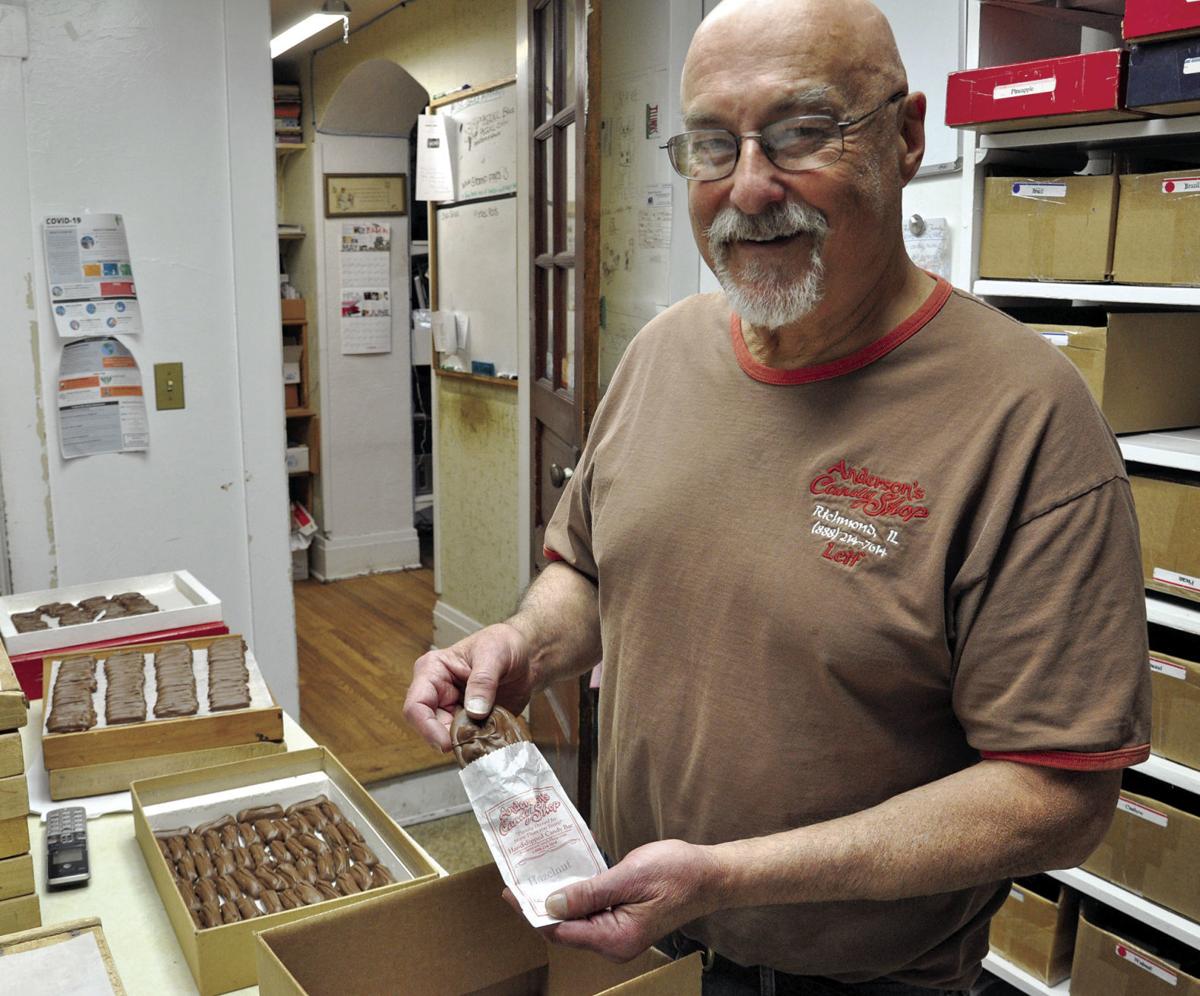 Leif Anderson, owner of Anderson’s Candy Shop in Richmond, Illinois, has been active in numerous projects at Trinity Church in Bloomfield. 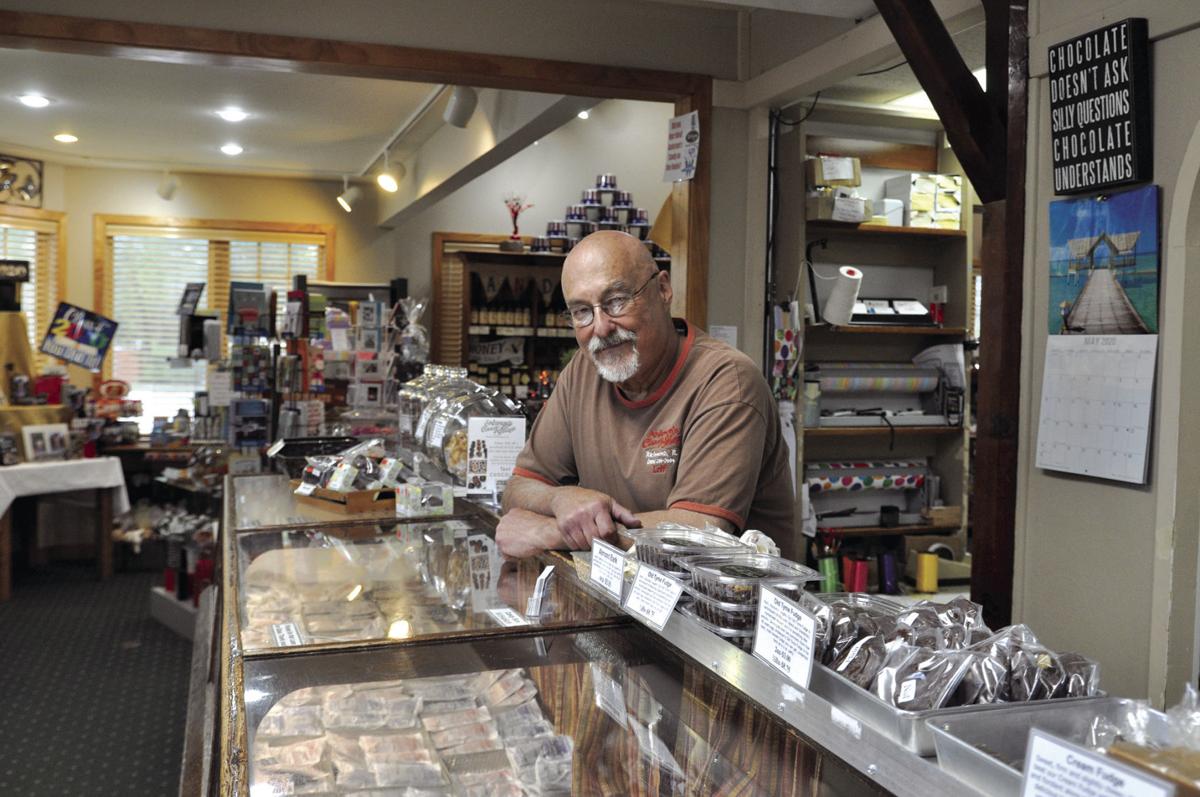 Leif Anderson works the counter at Anderson’s Candy Shop, in Richmond, Illinois. The family business has been lovingly making chocolates by hand over 100 years.

Leif Anderson fell asleep while he was driving and woke up just as his car drifted off the road, down the steep slope of a ditch in the pouring rain.

The car struck a post, and while he was not injured, his vehicle needed to be towed from the scene of the accident.

Then, Anderson recognized the tow truck driver. He met him 12 years ago, in his men’s group at Trinity Church in Bloomfield.

Anderson co-leads the group, which helped the tow truck operator battle alcoholism. Ten years ago, the group sponsored him through Alcoholics Anonymous, and now the driver was helping Anderson.

Best of all, said Anderson, the person has stayed sober for 10 years — and is now helping others.

This is why Anderson, age 70, is involved in numerous programs and ministries at Trinity.

“Anywhere that I can be useful, that’s where I want to be,” he said.

The owner of Anderson’s Candy Shop in Richmond, Illinois, has worked on several Trinity projects and ministries, everything from writing letters to convicts to helping people fix their homes.

“Leif is naturally positive and hopeful when he works with people,” said Pastor Brian Metke, of Trinity Church. “He always sees the potential in them and is willing to spend time investing in their lives.” Jen Melchi, Trinity’s director of assimilation, said Anderson is always willing to help.

He donates boxes of chocolates to new Trinity members, she said, plus he sings with the Worship and Praise team and speaks to the Recycled Teenagers senior group.

“He even helped my son’s scout troop by lending them sound equipment for a Veterans Day celebration,” said Melchi.

Anderson said he grew up going to church, but he drifted away from it until he married his second wife, Tracy. They have been together now for 21 years.

Tracy wanted Leif to find a church he liked. The search ended where it began — Trinity.

Anderson said he immediately knew it was a special church, but it took him a while to realize that what sets Trinity apart is how the men behave.

“They weren’t afraid to not just shake your hand and greet you, but give you a hearty hug after the service and actually care about what was happening in your life,” he said.

Fifteen years ago, he and Dick Peacock were tapped to lead the Trinity men’s group, where area counselors send men who need help battling drug and alcohol abuse or other crises.

The group also helps others, said Anderson. They delivered groceries for people. Once, the group cleaned the home of a person who was recovering from an illness.

Open to men regardless of whether they worship at Trinity, the group meets Saturdays at 8:30 a.m.

Anderson was also involved in Reach Out, a now defunct Trinity mission to help community members who could not tend to home repair issues.

He wants to revive the program, which ended because they could no longer find homes to work on.

In its heyday, the program had crews working on plumbing, heating, electrical, roofing and carpentry projects for community residents — for free.

“I found it very satisfying and rewarding work, and the people were always incredibly grateful,” said Anderson.

Recently, he started writing letters for a Trinity ministry to inmates.

Of the four Anderson corresponds with, two are incarcerated for murder, another for being a sex offender.

By writing to them, he feels he is helping in their recovery.

Two of the inmates will be released someday, said Anderson, and someone has to offer a helping hand.

Anderson was born and raised in the Anderson’s Candy Shop, which has been in business over 100 years.

Known for its handmade chocolates, the shop moved to Richmond in 1926, but it was founded in 1919 in Chicago.

Anderson did not immediately follow in his family’s footsteps.

While in college, he was drafted into the U.S. Army during the Vietnam War. During his service, he lived in Washington, Arizona, California and Washington D.C.

He was a hippie, he said, having to guard places against protesters who engaged in the same activities he participated in before the draft.

After the service, Anderson returned to Illinois, marrying his first wife and having two daughters.

Anderson went to work full-time at the candy shop after his father had a cancer scare.

Five children later — he has three sons with Tracy — Anderson said he still has his “wicked wit.”

He likes to make people laugh, he said, because laughter is contagious.

“Every chance I get, everywhere I go, I want to spread joy and happiness, and maybe make people think, too,” said Anderson.

ELKHORN — It appears as if the good food, good music and good times will still happen this year.

A cruise, a flea market and an ice cream social for dogs are just some of the numerous community events listed in this week's Happenings.

Nick Cordero, a Broadway actor who had admirers across the world rallying for his recovery, has died after a battle with COVID-19, his wife Amanda Kloots said.

DELAVAN — People will have to wait another year for the Cars Time Forgot car show.

Blast from the past: Seipp descendant revives family beer

Canceled TV Shows 2020: Which of Your Favorite Series Are Coming to an End?

A roundup of all of the shows that are coming to an end this year.

Fourth of July fireworks, line dancing and being active outdoors are the focus of some of community events in this week's Happenings.

Movies in a Minute: 'Greyhound'

How to safely road trip this summer

How to safely road trip this summer

Leif Anderson, owner of Anderson’s Candy Shop in Richmond, Illinois, has been active in numerous projects at Trinity Church in Bloomfield.

Leif Anderson works the counter at Anderson’s Candy Shop, in Richmond, Illinois. The family business has been lovingly making chocolates by hand over 100 years.