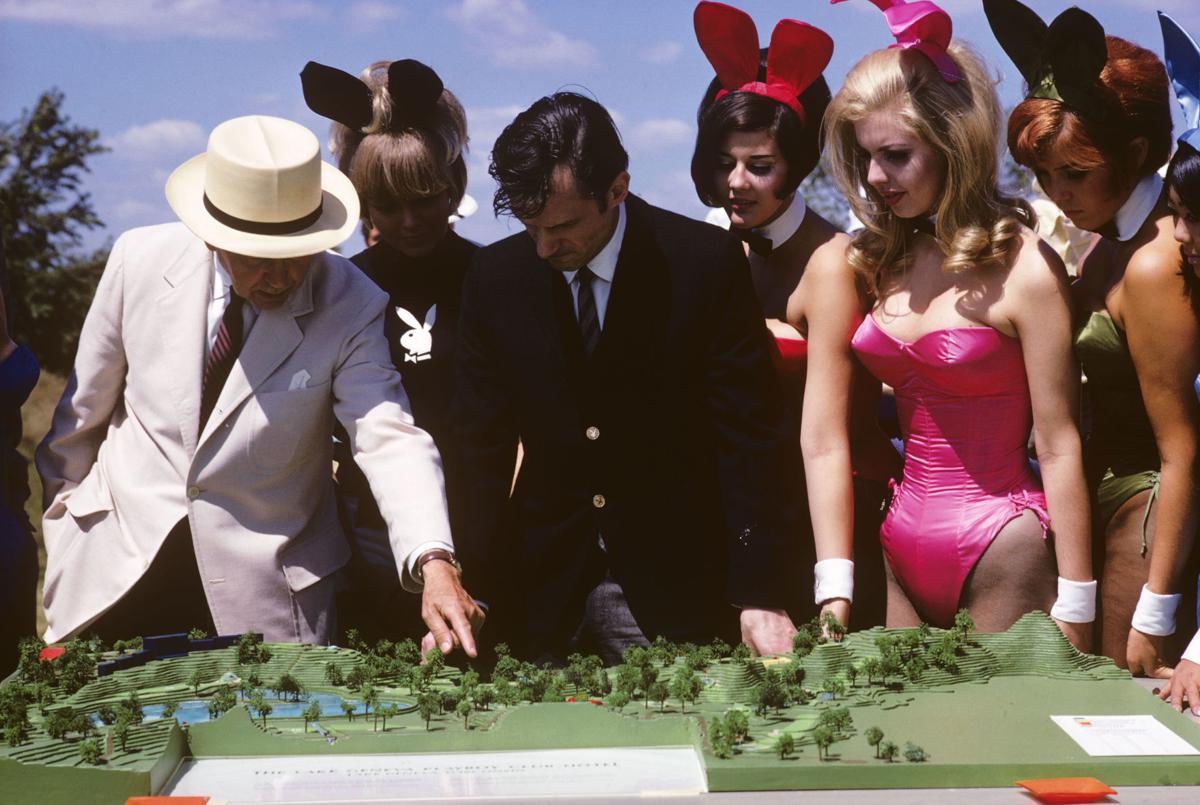 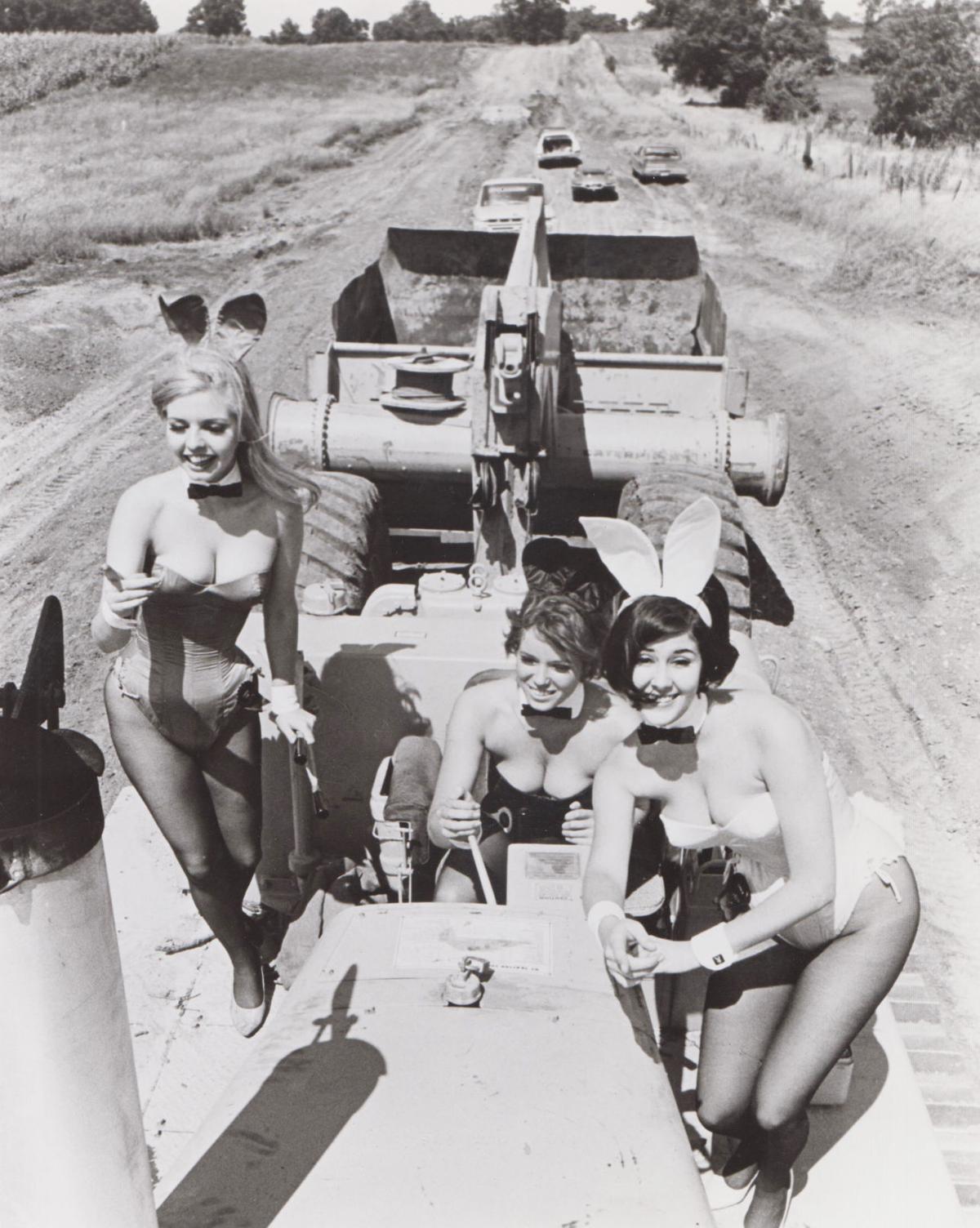 A trio of Playboy bunnies have some fun on construction equipment at the site of the future Lake Geneva Playboy Club, which opened 50 years ago this month and had a dramatic impact on Lake Geneva. (File photo/Regional News)

It was an urban, pleasure-filled paradise plopped down in the middle of conservative, church-going America.

In the mid-1960s, Playboy magazine owner Hugh Hefner and his empire settled on Lake Geneva as the location for their first Playboy Club in the United States.

Situated on converted farmland on the eastern outskirts of town, the club opened in May 1968 — 50 years ago this month.

The iconic resort combined attractive young Midwestern women in bunny costumes with top-name entertainers from Hollywood and crowds of free-spending thrill-seekers from Chicago.

In short, it transformed Lake Geneva, and remained an important local institution for 13 years before Playboy closed the doors.

Playboy Clubs existed elsewhere around the world, but unlike the others, this first American endeavor would provide guest rooms to match its dining, drinking and late-night entertainment.

Rosenzweig recalled that just a couple of years earlier, in 1965, Playboy bought an existing luxury hotel in Jamaica. Demonstrating the marketing power of the Playboy name, the hotel enjoyed a dramatic surge in business as soon as the purchase was announced — even before the first bunny took up residence there.

“We thought we would continue dipping our toe in the hotel business,” Rosenzweig said.

And the Playboy toe soon dipped into Geneva Lake.

Playboy bought about 1,300 acres of farmland located about a mile east of the Lake Geneva city limits.

Lake Geneva already had hotels where summer visitors could enjoy sitting by the pool and playing golf. But the vast open area acquired by Hefner provided an enormous blank canvas where Playboy could stake its claim —and make its mark.

“There was nothing like it between Chicago and Milwaukee,” Rosenzweig said.

The official groundbreaking took place on Friday, Aug. 26, 1966, with invitation-only guests and dignitaries in attendance.

Hefner flew in on a black helicopter.

Wearing a hard hat emblazoned with the Playboy bunny emblem, he walked up to a black box, pushed a red button and detonated a distant dynamite charge that blew a hole in the top of a land feature called Indian Knob, signaling the start of construction.

While guests enjoyed Wisconsin cheese and steaks grilled under a tent, skydivers dropped onto the new Playboy property and planted a Playboy flag.

“We are very happy to have Playboy come to Lake Geneva,” then-Mayor Emil Johnejack told the crowd during the festive occasion.

Playboy was starting a $6.5 million project that the company promised would bring $3.9 million a year in new spending to the area, with a staff of 250 employees sharing an annual payroll of $1.3 million.

Construction of the 265,000-square-foot resort took a little more than a year. The seven interconnected buildings that made up what was officially called the Lake Geneva Playboy Club-Hotel opened for business on May 6, 1968.

The hotel and main lodge were at the center of a five-acre central complex, which overlooked a man-made Playboy Lake.

According to “A Grand Tale,” a book on the property’s history, the main lodge contained 350 guest rooms, 10 meeting rooms and three bar/restaurants, one of which also served as a nightclub theater. There was also a dance club, a barbershop/salon and several other small stores.

The operation was an immediate success.

“It was very popular around the Midwest,” Rosenzweig said. “It drew people from around the U.S. and the world.”

While the good times rolled inside the club, management maintained good relations with the surrounding Lake Geneva community by making donations to local charities and inviting local organizations to visit the club for business meetings or events.

George Hennerley, former president of the Lake Geneva Hotel and Motel Association, arrived in town in 1980, well into the Playboy era locally.

Hennerley said the Playboy organization enjoyed an esprit de corps with most of Lake Geneva, although the company’s bawdy personality rubbed some people the wrong way.

“Some organizations stayed away because of the Playboy image,” he said.

Located in the town of Lyons, the club generated enough in hotel taxes that Lyons town officials built the current town hall with revenue from the Playboy taxes.

Lake Geneva historian Patrick Quinn said the community in the late 1960s and ‘70s was not generally as conservative as it is today.

Not only that, the geographic location of the Playboy Club insulated the place with a buffer zone of farmland that separated Hefner and his bunnies from the city’s eastern limits.

Quinn said although he and his friends were younger at the time, they did not go to the Playboy Club.

“It was too expensive,” he said.

The main connection between Lake Geneva and the Playboy Club, typically, was the bunnies, more than 100 of them. At the club, the young women — wearing corsets, bunny ears and tails — were the living emblem of Playboy hospitality.

They were also the conduit to bring Playboy money into the city. Once work was done, the bunnies became young women in search of a good meal and maybe a little dancing at surrounding restaurants and bars.

“We were having so much fun, working and going dancing,” former bunny Gail Frantz recalled.

Bunnies were well trained and strictly monitored, but they were also well paid. Frantz said she often made more money in a month than her father, who taught English at Badger High School.

She and the other bunnies shopped at the local stores and headed into town to take care of such chores as doing their laundry.

“I think a lot of people who had businesses appreciated that,” she said.

After 13 years of high times and success, the Lake Geneva Playboy Club’s fate was sealed 4,000 miles away in England.

The London Playboy casino was a major money-maker for Playboy Enterprises. But in October 1981, the casino’s license was pulled by the British Gaming Board for alleged rules violations. Loss of the license meant the loss of a major profit center.

As a consequence, Playboy clubs were closed around the world.

“When we heard about London, we could see the writing on the wall,” Hennerley said.

A trio of Playboy bunnies have some fun on construction equipment at the site of the future Lake Geneva Playboy Club, which opened 50 years ago this month and had a dramatic impact on Lake Geneva. (File photo/Regional News)