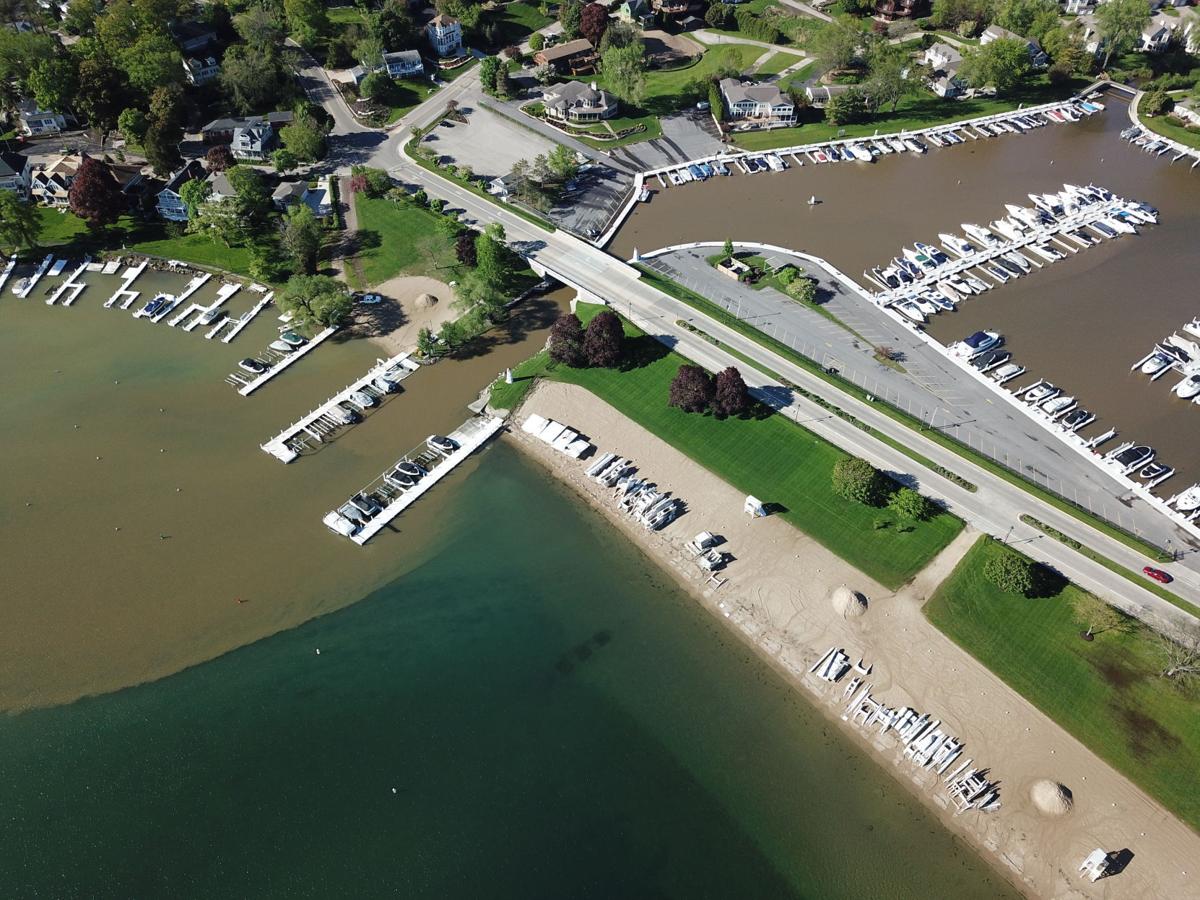 In an image provided by the Abbey Marina group, an aerial of the Fontana marina shows dark areas where sedimentation has accumulated, reducing the water depths for boats. 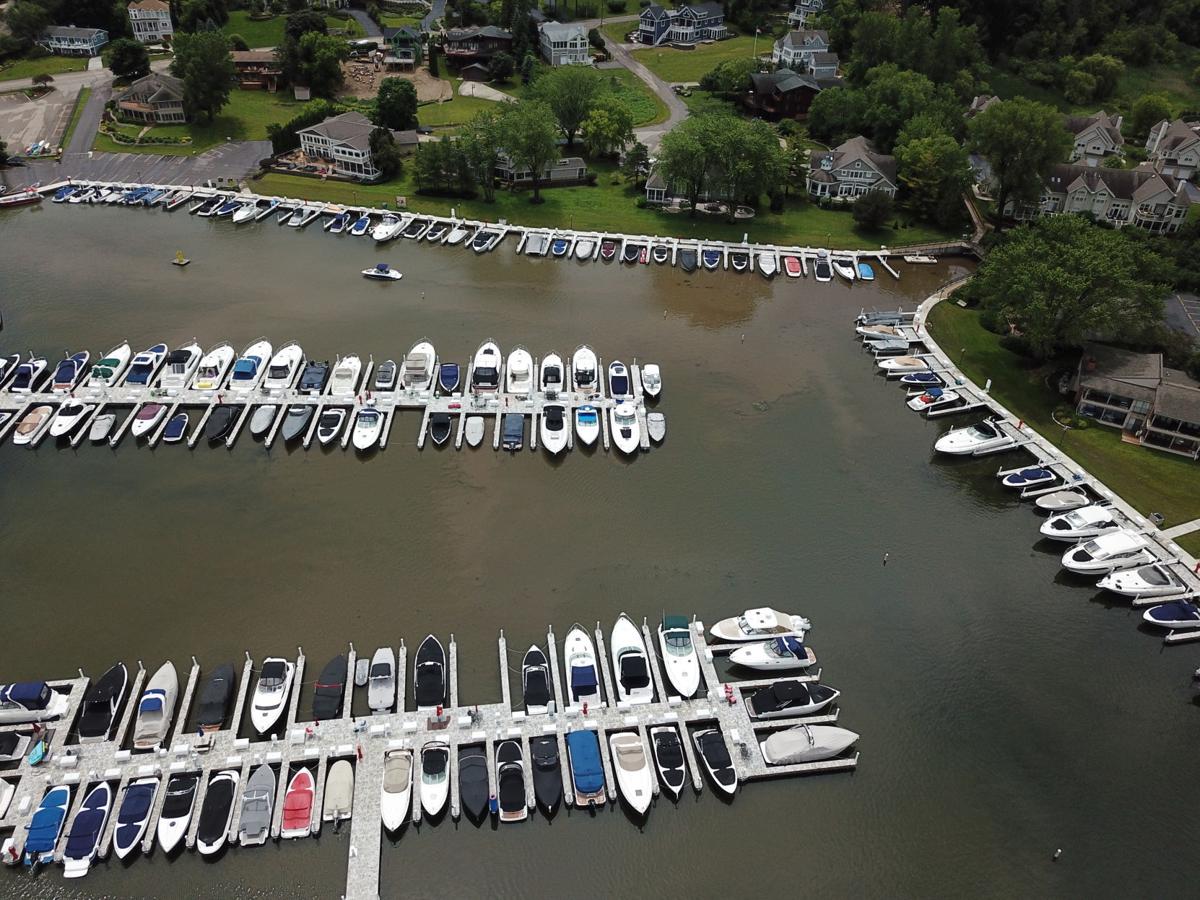 An aerial photo provided by the Abbey Marina group shows an area in the southwest section of the marina where the group believes sedimentation is accumulating from the Potawatomi Creek. 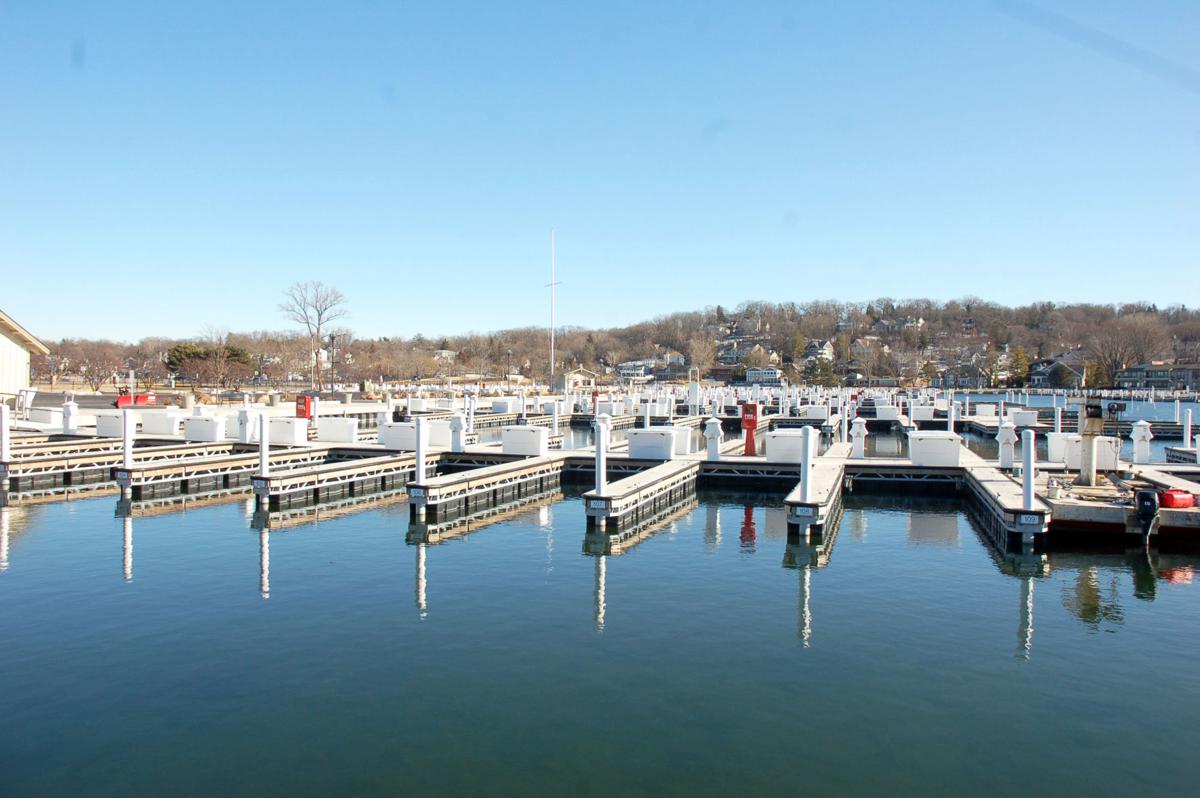 The Abbey Marina in Fontana. 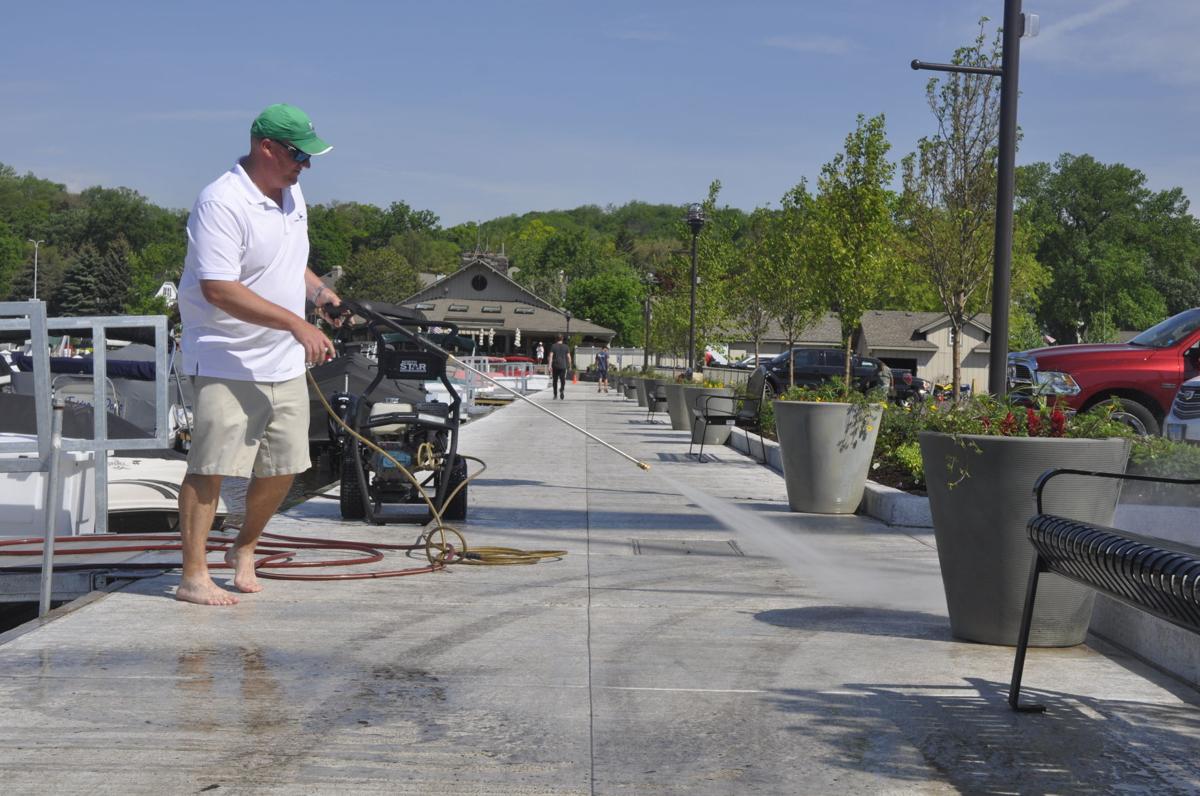 Ed Snyder, harbormaster at the Abbey Marina, power washes sidewalks in the privately owned marina that is home to about 400 boat slips.

If the board approves, the village would coordinate a study to evaluate the local watershed, track stream and rainwater flows, and develop potential solutions for the sedimentation issues.

The accumulation of sediment at the bottom of the harbor has, by some accounts, reduced water depth to two feet in some spots, making boat traffic potentially dangerous.

But whether the village, the private marina organization or someone else pays for the $19,000 study is still unknown.

The sedimentation issue has been a topic of discussion for years between the village and the Abbey Marina group.

The Abbey Marina, which is adjacent to the Abbey Resort, is a private club that operates about 400 boat slips, as well as a club house, swimming pool and outdoor space.

Harbormaster Ed Snyder approached the village’s lakefront and harbor committee in January and presented findings that the cause of increased sedimentation was a village storm-water management project near the Big Foot County Club.

The village-funded project, completed about five years ago, rerouted storm water through a pipe down a slope north of the country club and into Potawatomi Creek, which runs into the marina.

Snyder said storm-water now picks up high levels of sedimentation because it flows down a steep slow that was not a waterway before the village project. Snyder then requested village assistance in resolving the issue to save the marina from costly dredging.

While the private harbor group has historically spent $15,000 to $20,000 each year to do spot dredging, the group now is seeking village involvement because of an rapid accumulation of sediment and because officials believe the village’s storm-water project has played a role.

When the southwest corner of the harbor was dredged in 2018, it had a depth of about six feet, Snyder said. But the depth has since decreased to about two feet in the area where Potawatomi feeds into the harbor and the most sediment collects.

While no boats have been seriously damaged yet, he said, the shallow depths could cause serious issues.

Snyder said there have been 13 times since March when the marina has turned murky from sedimentation running from the village’s storm-water system.

“It’s coming from the village’s storm-water pipes,” he said.

At a July 22 meeting of the village’s lakefront and harbor committee, village trustee Rick Pappas, the committee chairman, questioned whether the village is responsible for the sedimentation problem.

Pappas said the source of the problem needs to be identified before the village assists in financing. The Big Foot Country Club storm-water system, he added, contributes only a small portion to the watershed.

“Whoever is suffering the damages, mainly the Abbey Harbor, needs to go to the ones who caused the damage,” he said.

Snyder’s father, Ed Snyder Sr., the former harbormaster, told village officials there is evidence that the village storm-water project has caused sedimentation and that the marina group should not be the one to correct the issue.

“The Abbey Harbor is the recipient of all of this, not necessarily the cause,” Snyder Sr. said. “So to try to throw it onto the Abbey to pay for this, I don’t think makes a lot of sense.”

Rob Chanson, another member of the village committee, said regardless of who is responsible, action needs to be taken quickly to resolve the sedimentation.

To expedite decision making, Chanson proposed sending the matter onto the village board without recommendation.

“I think we want to do something sooner rather than later, not year from now or two years from now,” Chanson said.

In an image provided by the Abbey Marina group, an aerial of the Fontana marina shows dark areas where sedimentation has accumulated, reducing the water depths for boats.

An aerial photo provided by the Abbey Marina group shows an area in the southwest section of the marina where the group believes sedimentation is accumulating from the Potawatomi Creek.

The Abbey Marina in Fontana.

Ed Snyder, harbormaster at the Abbey Marina, power washes sidewalks in the privately owned marina that is home to about 400 boat slips.