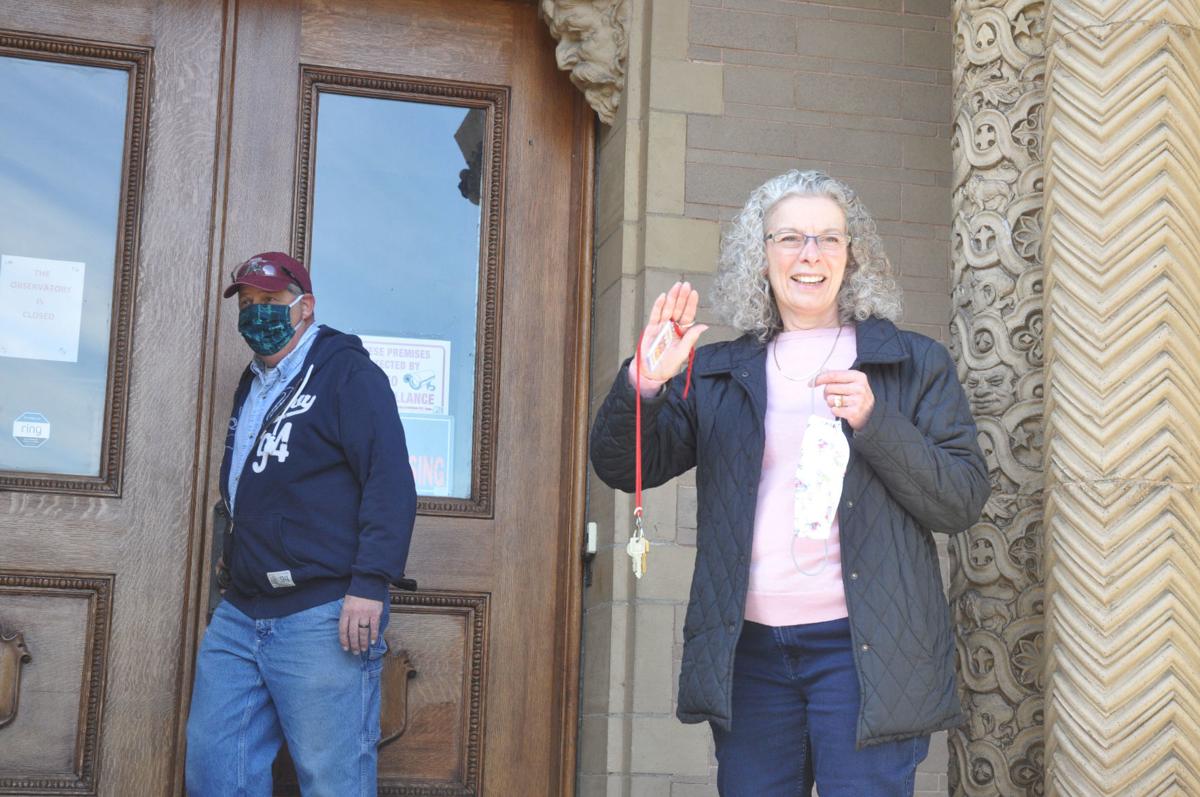 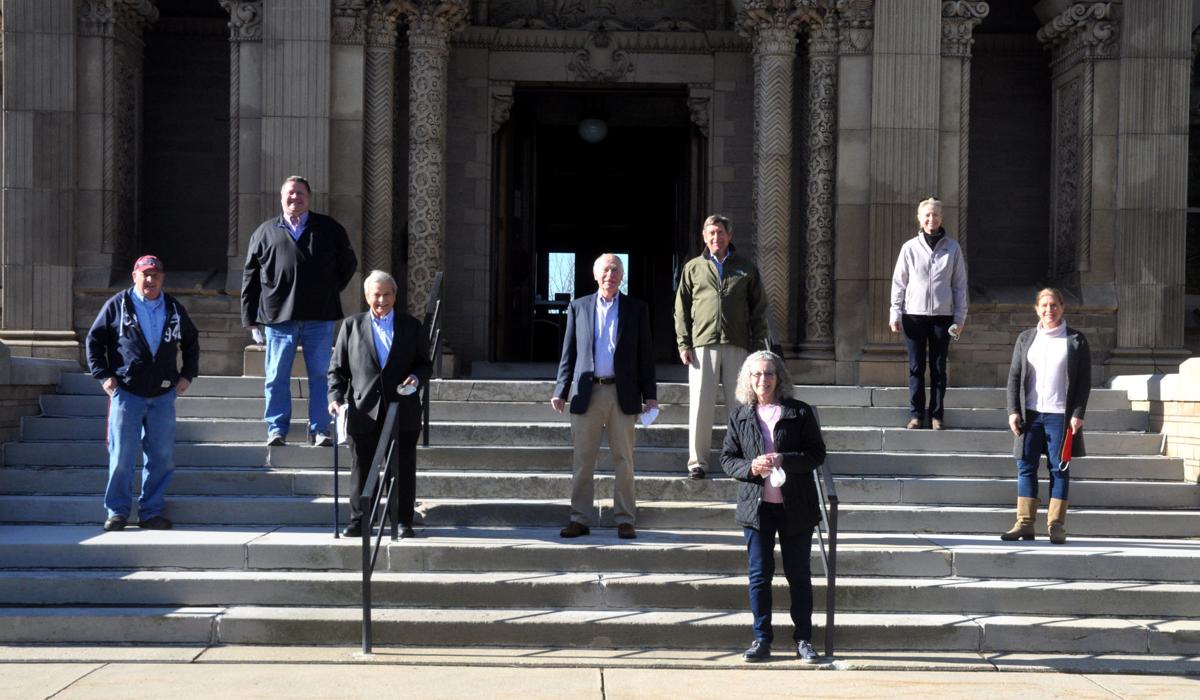 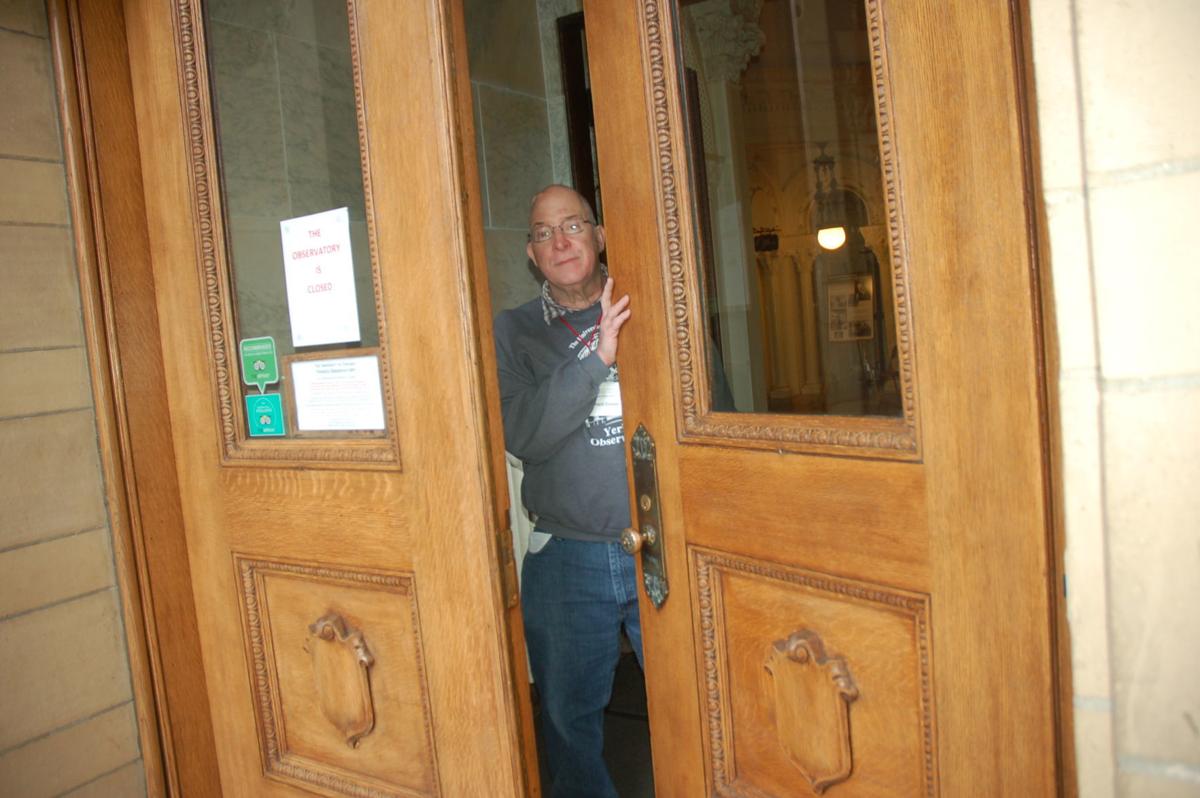 Tour guide Richard Dreiser closes the front door of Yerkes Observatory on Sept. 29, 2018, as the University of Chicago officially closed the Williams Bay landmark to the public. 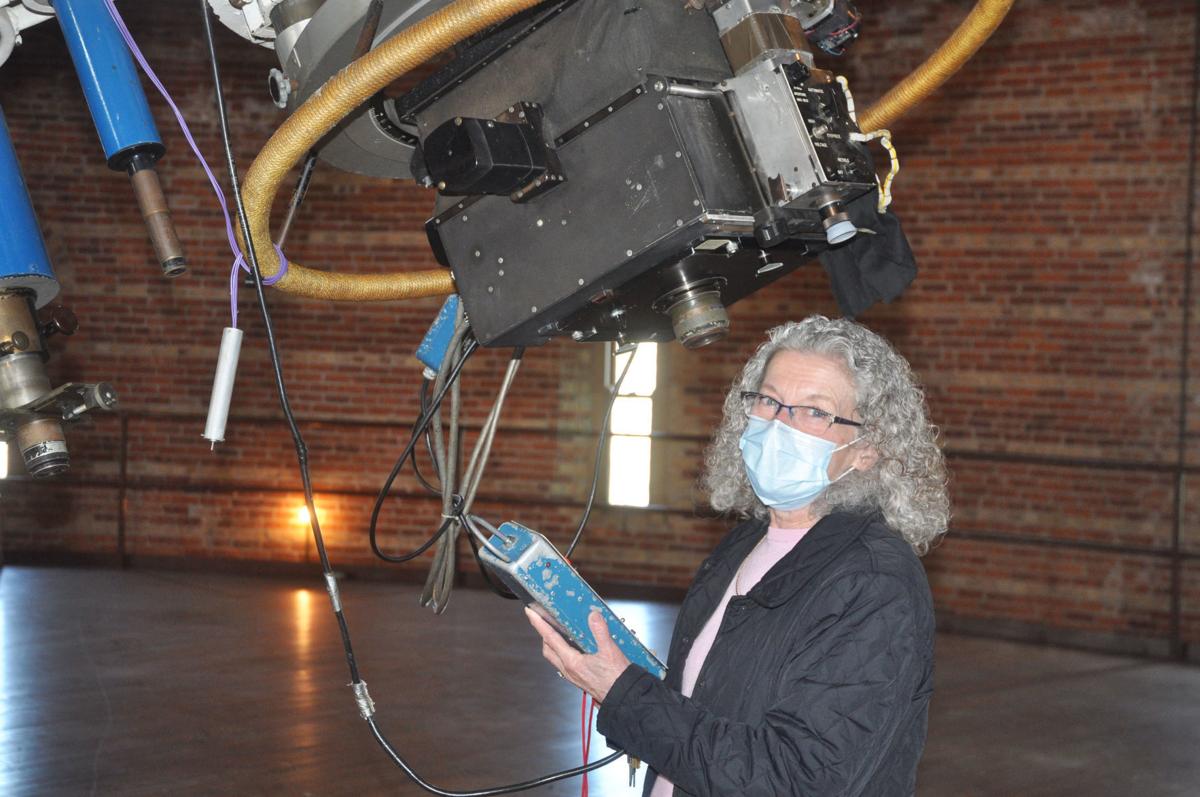 Wearing a mask to guard against the coronavirus, Dianna Colman, chairwoman of the Yerkes Future Foundation, holds the control panel today beneath the main telescope inside Yerkes Observatory.

WILLIAMS BAY – Although no crowds amassed, no ribbons were cut and no champagne bottles popped, a celebration took place May 1 on the front steps of Yerkes Observatory.

Culminating a two-year effort to preserve the beloved landmark of scientific exploration and education, the private Yerkes Future Foundation officially assumed ownership of the property from the University of Chicago.

After announcing in March 2018 that the facilities were closing to the public, the university donated the iconic domed observatory and about 50 surrounding acres of land to the nonprofit foundation.

Ed Struble, a longtime caretaker of the property, greeted foundation officials and other supporters and observers after the university finalized its donation and handed over keys to the 120-year-old observatory.

Struble, who has managed the observatory for nearly 30 years, said he was excited to see people who care so much about Yerkes taking ownership.

“The future of this place is very bright,” he said. “I can’t wait to see what’s going to happen here.”

With the keys in hand, Yerkes Future Foundation chairwoman Dianna Colman was given the honor of unlocking the doors and leading the excited crowd inside for the first time after the property transfer.

Stepping into the intricately decorated lobby, Colman said the sensation of ownership was exciting and overwhelming.

Months of negotiations with the University of Chicago on how the property would transfer, Colman said, were only the first steps in a long road to reopening, preserving and utilizing the historic facility, which houses what was once the world’s largest refracting telescope.

“It’s going to take a while to get everything in gear,” Colman said. “But we will get there.”

The foundation, formed in 2018, includes local business and civic leaders who joined together after the impending closure was announced, with the goal of preserving the observatory for public enjoyment for years to come.

Now that ownership is secure, the foundation can begin renovations and moving ahead with plans to reopen Yerkes to the public, possibly this fall, for the first time since the doors were closed in October 2018.

The foundation had hoped to reopen the this summer, but the coronavirus outbreak has caused delays in fundraising and permitting. A permit to expand parking on the property has been delayed by Williams Bay village officials.

Colman said the virus has also slowed fundraising efforts to finance repairs and restoration of the observatory.

Along with some donations already received, the University of Chicago was to have donated to the Yerkes Future Foundation an undisclosed amount at the time of the ownership transfer. Another donation is expected from the university’s sale of other lakefront property that was part of the Yerkes campus.

Loudenbeck said preserving the Williams Bay attraction has been a journey for the foundation and community alike, but that it has finally reached its successful conclusion.

“This is an iconic touchstone for Williams Bay and for the surrounding area,” Loundenbeck said. “And to see it resolved with a plan for the future is a really shining moment for the area.”

Follow the roller-coaster ride of Yerkes Observatory over the past couple of years as the Williams Bay landmark is closed to the public, then …

With video: University of Chicago plans to sell Williams Bay land: Will it be for residential or other plans?

WILLIAMS BAY – One way or another, the University of Chicago plans to sell its 8.72 lakefront acres in the Village of Williams Bay – the remai…

Tour guide Richard Dreiser closes the front door of Yerkes Observatory on Sept. 29, 2018, as the University of Chicago officially closed the Williams Bay landmark to the public.

Wearing a mask to guard against the coronavirus, Dianna Colman, chairwoman of the Yerkes Future Foundation, holds the control panel today beneath the main telescope inside Yerkes Observatory.