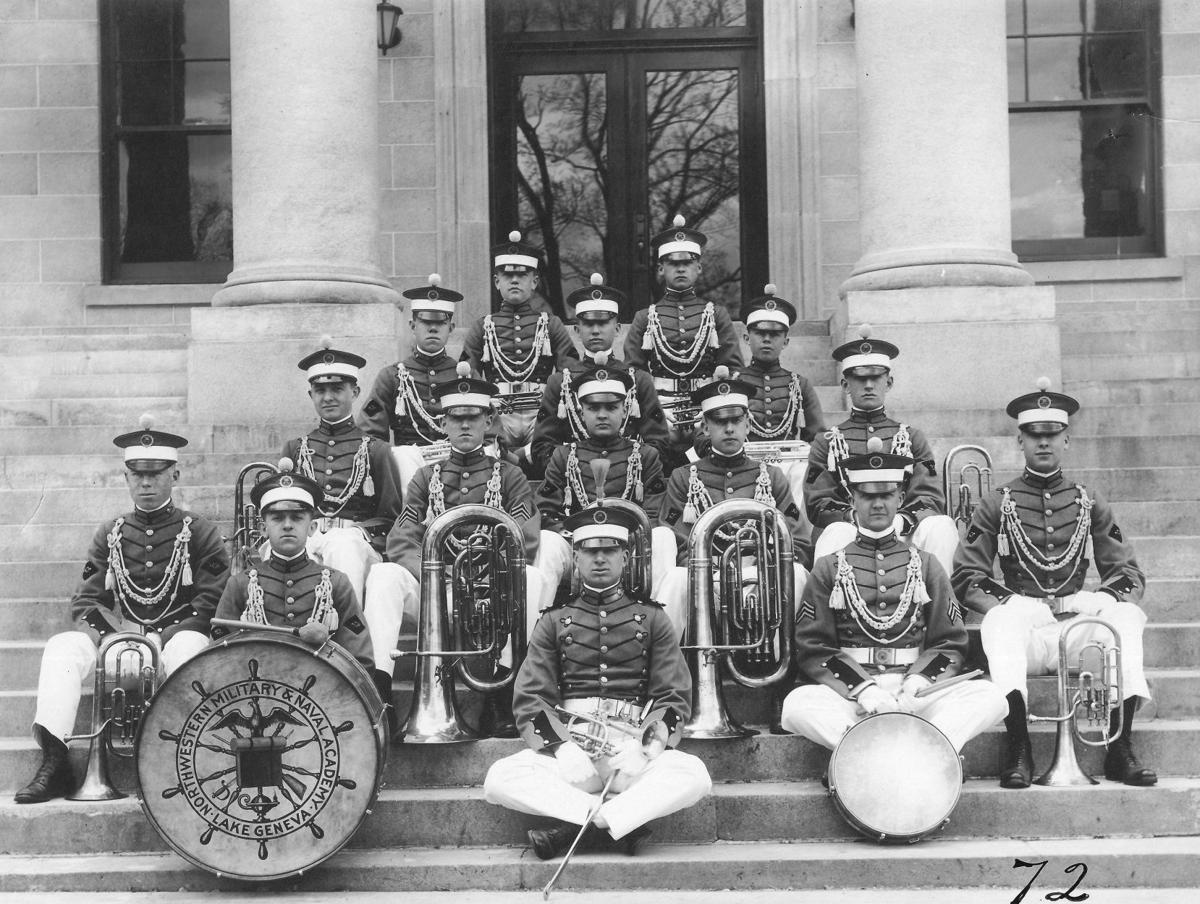 Members of the Northwestern Military and Naval Academy marching band pose outside of the school’s Davidson Hall administration building during the academy’s 80-year run in the town of Linn. 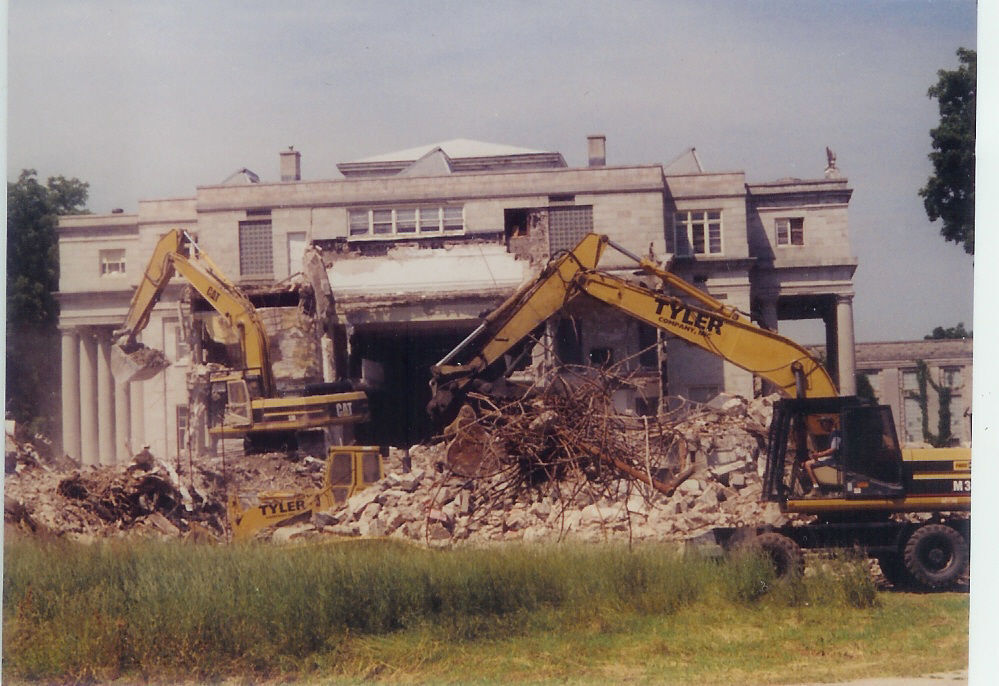 Davidson Hall, the administrative headquarters of the Northwestern Military and Naval Academy in the town of Linn, comes down in 2000, five years after the academy was closed. 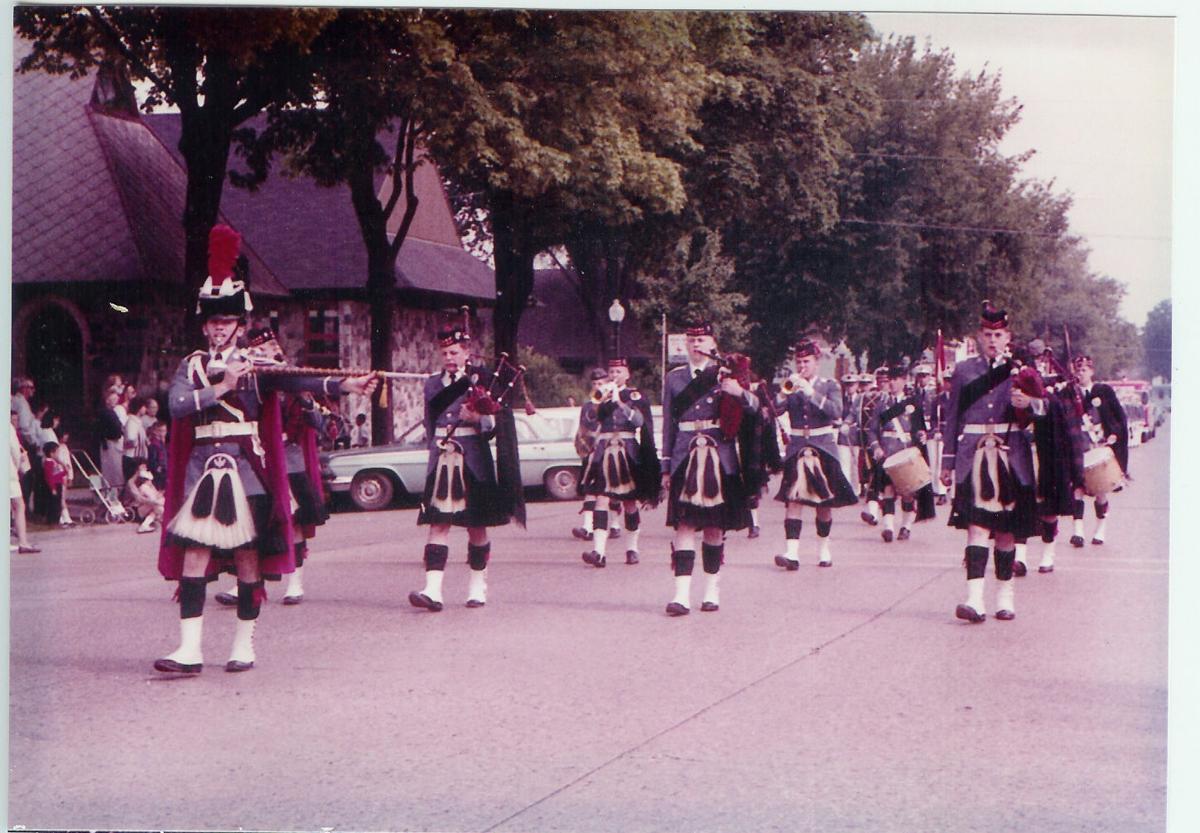 Students from the Northwestern Military and Naval Academy participate in a parade through downtown Lake Geneva at a time when the academy was thriving in the town of Linn. 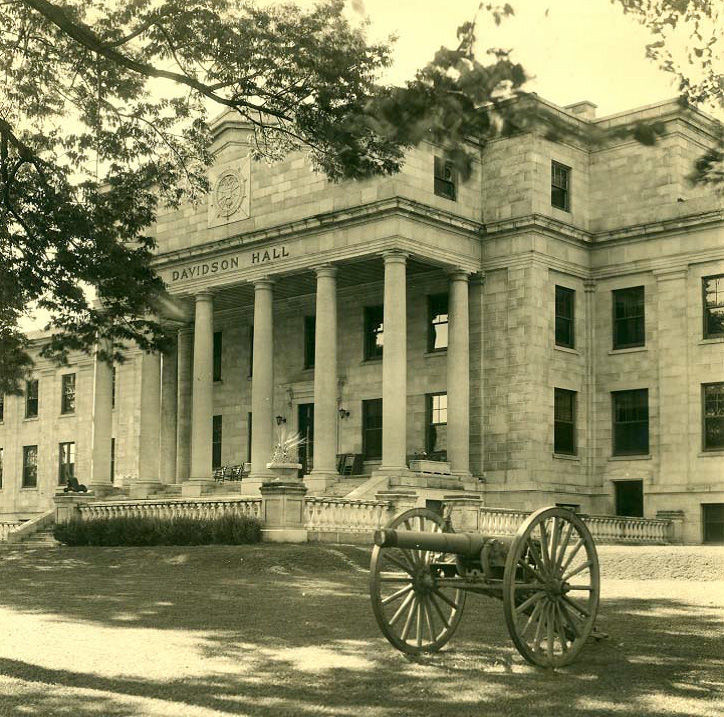 Davidson Hall, the administrative headquarters of the Northwestern Military and Naval Academy, was featured in a 1970s horror movie. 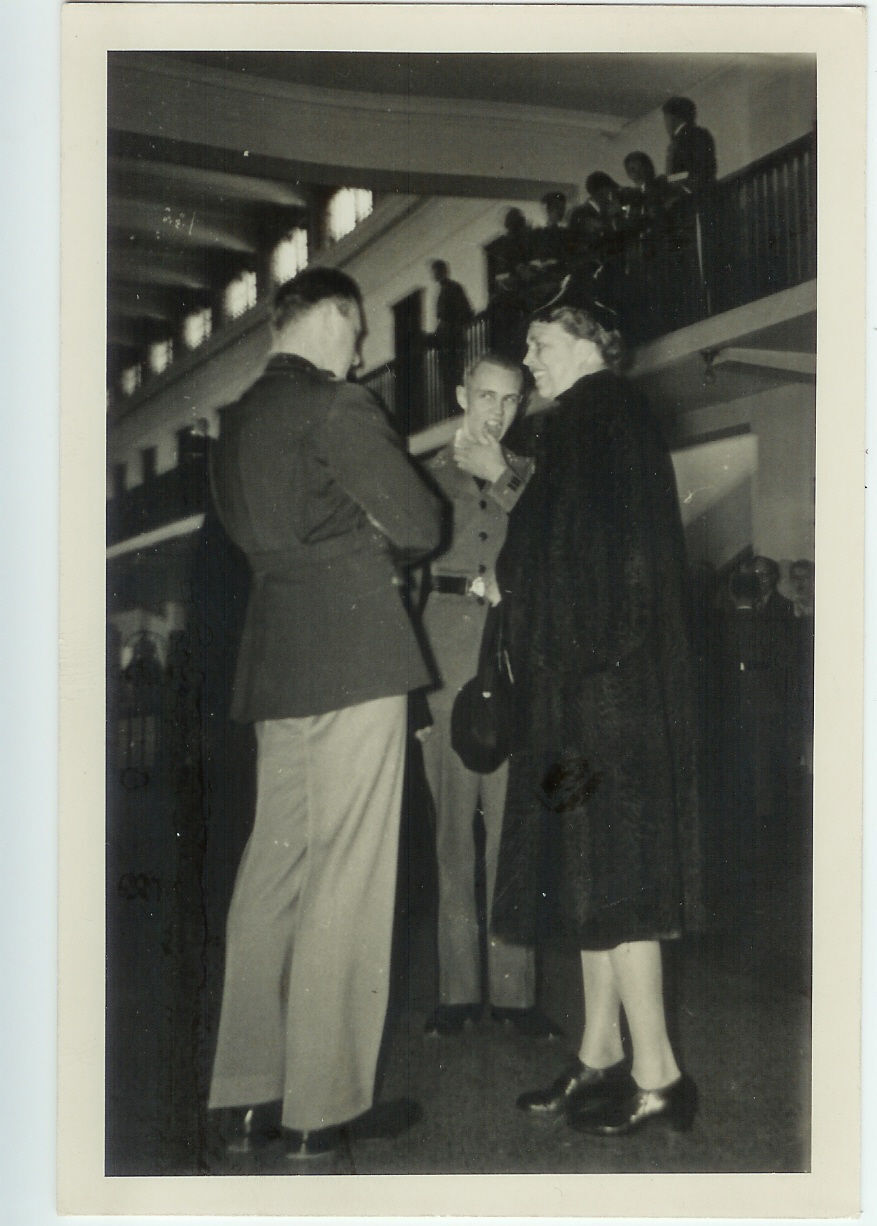 Former First Lady Elenore Roosevelt, right, visits her grandson, Curtis “Buzz” Roosevelt, center, while he was a student at the Northwestern Military and Naval Academy in the Town of Linn.

TOWN OF LINN — For Christine Jacobson Brookes, the Northwestern Military and Naval Academy was more than just a school.

It was a home with 180 older brothers, a place her mother became a movie star, and a lively hub where she would form lifelong friends.

For Brookes and so many others involved in the academy, the school was adolescence in its prime — an opportunity to grow, learn and explore.

“It meant a lot to a lot of people,” Brookes said.

While the 25th anniversary of the school’s closure passes quietly without fanfare in 2020, alumni in the Lake Geneva region think back on the experiences and rich history formed around its neo-classical façade.

The academy schooled hundreds, if not thousands, of students during its 80 years as a respected and cherished institution along the shore of Geneva Lake in the town of Linn. The Davidson Hall building, which served as the school’s administrative headquarters, may not stand today, but the memories of those involved with the institution live on.

The school opened in 1915 in what is now the South Shores Club, after its original location in Highland Park, Illinois, was burned down in a fire.

Originally named the Northwestern Military Academy, the school was able to incorporate naval exercises because of its proximity to Geneva Lake after moving to the town of Linn.

Colonial Royal Page Davidson, the first headmaster of the new school, stated in a 1919 school catalogue that the academy’s mission was “to graduate young men who, with sturdy physique, sound scholarship, refined tastes, high moral and spiritual ideals, will be best prepared to make good citizens,” according to information gathered by the Geneva Lake Museum.

Following the death of Davidson on Jan. 16, 1943, Episcopal Father James Howard — Jacobson — Brookes’ father became the next headmaster of the academy, after serving as interim headmaster for one year.

The academy was closed in 1995 after merging with its rival school, St. John’s Military Academy, due to declining enrollment and growing property values along the lakefront. After the merger, the two schools formed the St, John’s Northwestern Military Academy — a facility that still operates today in the Waukesha County community of Delafield.

The academy received another moment in the spotlight when the building’s Davidson Hall was used as a filming location in the 1978 horror film “Omen II,” serving as the military youth academy for the character Damien.

Many of the teachers, staff members, and affiliates of the academy were used as extras in the film, including Brookes’ mother. Brookes said after she and her family saw the film, they joked with her mother that she was a movie star.

Many alumni still live in the Lake Geneva area today, and think fondly of their time at the academy.

Graduate Jeff Glass, the third-generation owner of Glass Insurance Center in Lake Geneva, said while he was not thrilled to be attending the academy at first, he looks back fondly now on his time in the school.

Glass said he was not expecting to attend the academy originally, but was actually tricked into going the summer before entering seventh grade. He said he had gone with his father and older brother to the academy to meet then-quartermaster Jack Frost and have his brother fitted for a uniform. While his brother was being fitted, Glass said he poked fun at him for having to attend the school, which caught the attention of his father. His father asked Frost what grades the academy accepted, and was told students could enroll as soon as seventh grade.

“My dad looked at me, then looked back at Jack Frost and said, ‘Set him up, too,’” Glass said. “I sort of talked my way into going there.”

Glass said he was resistant toward the militant structure initially, noting he was the only student in his class to not move up in rank until his sophomore year. But he now looks back on his time there fondly.

Glass said he recalls the golf coach at the time letting the boys stop for beers before heading out to the field when he was a senior. He also enjoyed riding his snowmobile home over the weekends to visit family, and spending time at the Majestic Hills ski hill when his grades were good enough to be allowed a leave of campus.

“There’s a lot of good memories there,” he said.

Brookes’ experience in the school was a unique one. She grew up in an apartment housed within Davidson Hall until the age of seven, as the daughter of the school’s headmaster of 30 years, Chris Jacobson Brookes.

She ate with the boys in the mess hall, celebrated birthday parties with the boys on the front lawn, and was even taught to ride a bike by the all-boy student body.

“They taught me how to ride a bike,” she said. “I think they taught me a few swear words, too, which my mom was not real pleased about.”

She said it was like having 180 older brothers who would cycle through the years, as one class graduated and the next came in.

Brookes said some of her favorite memories of the academy were Memorial Day parades, where students would take a Geneva Lake Cruise Line charter to Lake Geneva to march in the parade clad in kilts and bagpipes. She also remembers a trip she was able to take in eighth grade with her father abroad to visit Greece, Rome and Paris.

Town of Linn resident and former town supervisor Roy White also has cherished memories of the academy, although he never attended the school.

White said his family was able to rent out Davidson Hall in the early 1990s as a venue for a daughter’s wedding while the students were away on summer break.

He said the academy and its campus were a beautiful backdrop during the wedding ceremony hosted on the academy’s front lawn.

“We have nice memories of the building,” he said.

White said he would like to see some marker of sorts for the academy near its former site, without taking away from the South Shore Club’s current uses for the land.

White was involved in efforts while serving as a supervisor on the Town of Linn in 2019 to have a memorial plaque honoring the 10th anniversary of the academy’s merger with St. John’s Military Academy moved from its current location on Shadow Lane in the town closer to the original site of the academy.

Town leaders had hoped to have the plaque moved before the 25th anniversary of the academy’s closing, but plans never came to fruition after the town faced permitting complications involved with moving the plaque close to the lakeshore path.

A life of luxury

WILLIAMS BAY — Less than two weeks before the Williams Bay board is expected to vote on the fate of the 8.72 acres of lakefront property near …

Members of the Northwestern Military and Naval Academy marching band pose outside of the school’s Davidson Hall administration building during the academy’s 80-year run in the town of Linn.

Davidson Hall, the administrative headquarters of the Northwestern Military and Naval Academy in the town of Linn, comes down in 2000, five years after the academy was closed.

Students from the Northwestern Military and Naval Academy participate in a parade through downtown Lake Geneva at a time when the academy was thriving in the town of Linn.

Davidson Hall, the administrative headquarters of the Northwestern Military and Naval Academy, was featured in a 1970s horror movie.

Former First Lady Elenore Roosevelt, right, visits her grandson, Curtis “Buzz” Roosevelt, center, while he was a student at the Northwestern Military and Naval Academy in the Town of Linn.