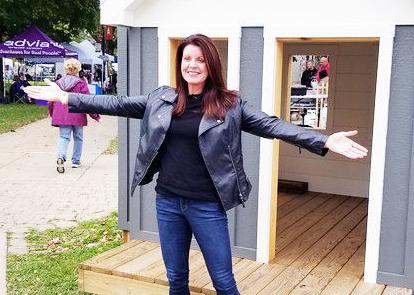 Amy Garcia, a teaching assistant at Walworth Elementary School, celebrates alongside the playhouse that she won in a raffle at Elkhorn Oktoberfest. 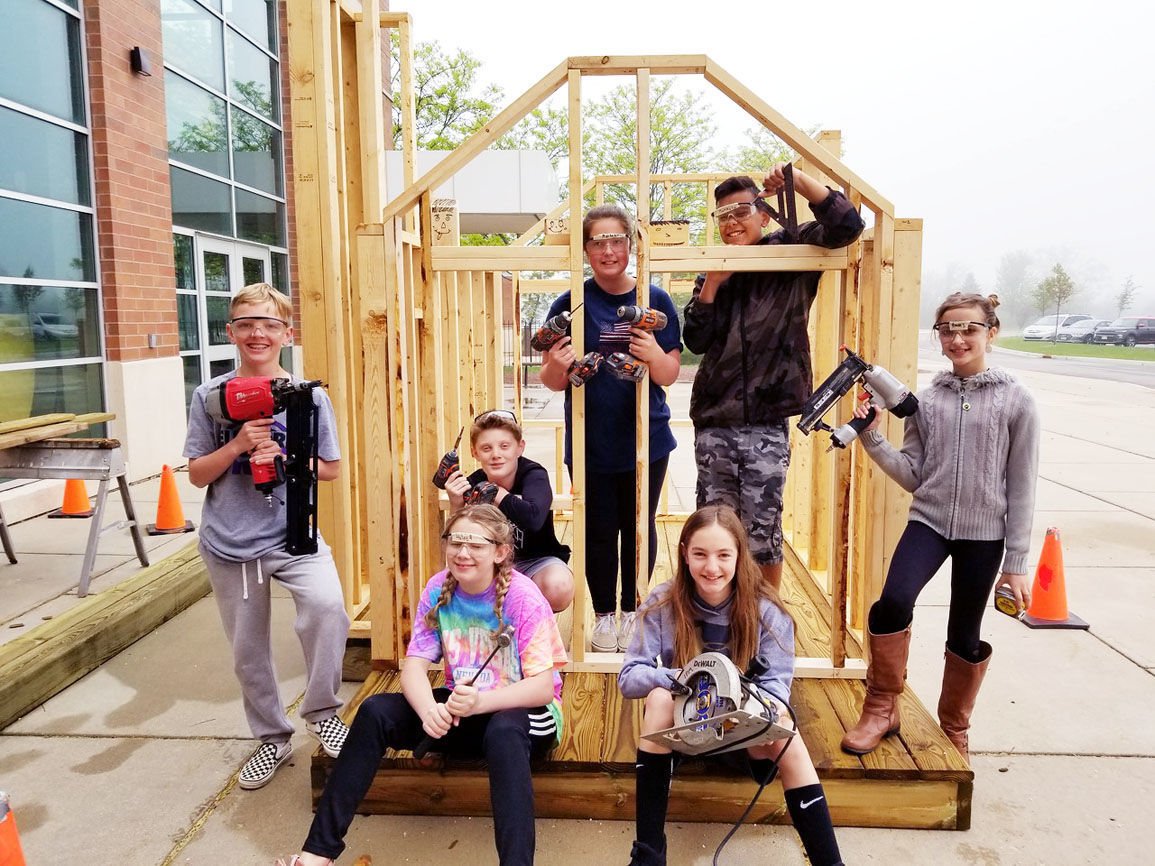 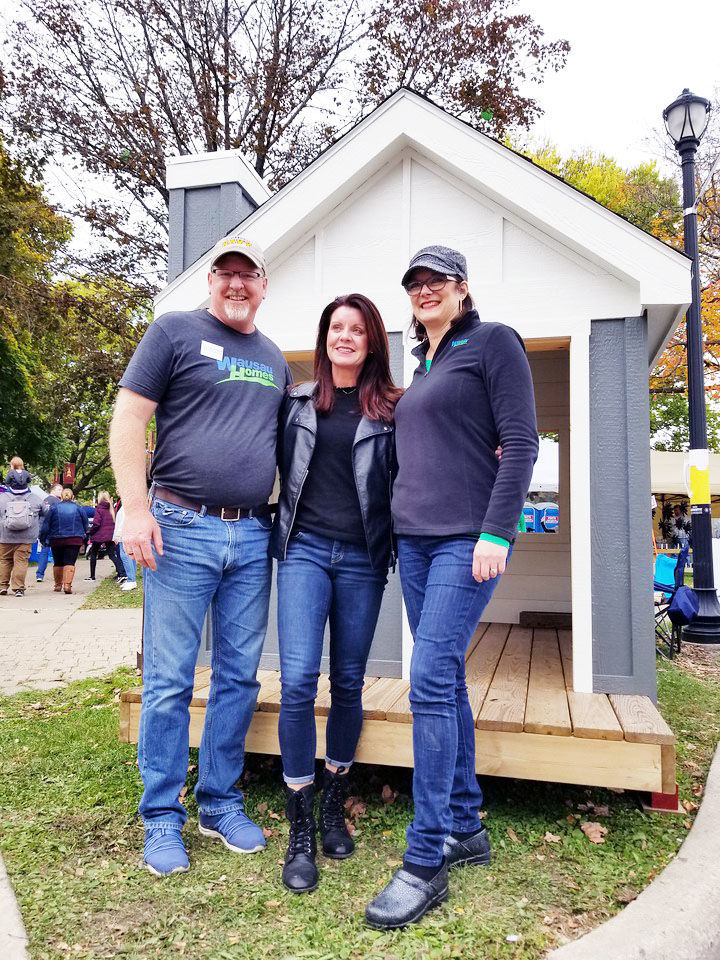 WALWORTH — Amy Garcia had a good feeling about it when she paid $25 for a raffle ticket to win a large children’s playhouse.

And the school teacher knew exactly what to do with the prize.

Garcia is donating the professionally built playhouse — valued at $6,000 — for students to enjoy on the playground at Walworth Elementary School, where she works.

Since she joined the staff at Walworth Elementary last year, Garcia said, she has developed a deep affection for the school and the students.

“It’s a magical place,” she said. “There’s a very big sense of community.”

But that is not the whole story behind the 7-foot-tall playhouse, which will travel quite a distance before arriving in Walworth for children to enjoy for years to come.

It was another gesture of goodwill at a school located miles away that landed the playhouse in a raffle.

Students at Elkhorn Middle School in Elkhorn built the playhouse as a school project with a local construction company. Those students then donated the finished product to New Beginnings, a nonprofit group battling domestic violence in Walworth County.

When New Beginnings held a raffle at the Elkhorn Octoberfest event last month, the raffle raised $5,000 for the domestic violence group. And a certain school teacher in Walworth was the big winner.

Walworth Elementary Principal Phil Klamm said the roundabout manner in which the playhouse has found its way to his school makes the donation all the more special.

“I just cannot wait until the kids see it,” Klamm said. “The kids are going to love it.”

The A-frame playhouse, which is big enough to hold about 10 kids at a time, is due to arrive on campus within a few weeks.

It began last spring at Elkhorn Middle School as a pile of lumber.

Wausau Homes-Elkhorn, a construction company owned by Greg and Julia Ingersoll, had offered to give middle school students a hands-on lesson in the construction trades.

Eight students chosen for the special project spent two months learning and building. The husband-and-wife Ingersoll team supervised the effort and made sure that the playhouse was built to professional standards.

Greg Ingersoll said he was proud when the students agreed to donate their finished product to New Beginnings, an Elkhorn-based group that works with battered women and their children.

“That’s what we’re in business for,” Ingersoll said. “We want to give back to our community.”

Klamm said it is solid and safe for school kids.

The playhouse was displayed at the Elkhorn Oktoberfest last month for the raffle, with tickets costing $25 each. Garcia, who lives in Elkhorn, went to Oktoberfest with family members visiting from Chicago.

Hired last year as a teaching assistant at Walworth Elementary School, Garcia works with students in small groups to help with their reading, spelling and other literacy skills. The school has 420 students in pre-kindergarten to eighth grade.

After dropping $25 on a raffle ticket, Garcia got a strong sense that she was going to win the drawing. With her own children too old for a playhouse, she started making plans in her mind for giving it to the kids at Walworth Elementary.

“I knew instantly where it needed to go,” she said.

A few hours later, she received a telephone call that she had won the raffle.

When she told Klamm about her donation, the principal agreed that it would fit nicely with other playground equipment the school has for its younger students.

Klamm also was not surprised to learn of Garcia’s generosity.

Eryca Card, a teacher who oversaw the students on the construction project, said she and her students were notified of the raffle results and of the prize winner’s donation to the school in Walworth.

Seeing their work bring positive results in the community has made the playhouse-building exercise even more educational, Card said.

“They’re learning how big an impact that can make,” she said. “I don’t think it could’ve been any better outcome.”

Part of the reason for the staffing shortage may be because people feel they are earning enough money through unemployment and stimulus payments.

The House of Music has opened a new cafe outside Lake Geneva on Highway H. They also built an outdoor stage and plan to open a restaurant this summer at the former Lumberman's Lodge.

Employee shortages affect many area businesses; restaurant asks customers to be patient if certain menu items are not available

Owners of Oakfire Pizza, 831 Wrigley Drive in Lake Geneva, recently posted on the restaurant’s Facebook page that they are experiencing a staffing shortage, advising potential customers that some services may take longer than usual and certain menu items may not be available.

History column: Lake Geneva's location is key to its history

For readers who may have wondered why Lake Geneva exists where it does, the answer is actually quite simple. Location is everything.

Check out this historic downtown building turned into an indoor glamping experience available to rent in Lake Geneva.

Amy Garcia, a teaching assistant at Walworth Elementary School, celebrates alongside the playhouse that she won in a raffle at Elkhorn Oktoberfest. 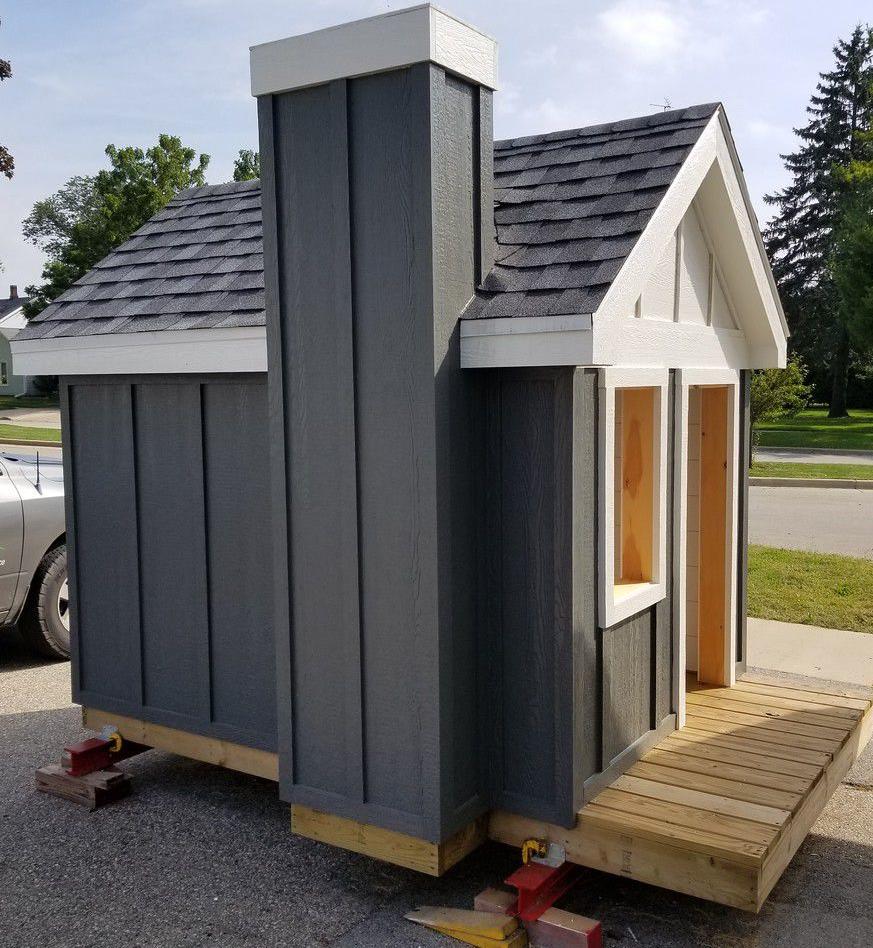 The A-frame playhouse, which weighs about 2,000 pounds, was professionally built with a finished interior, roof shingles and exterior siding.